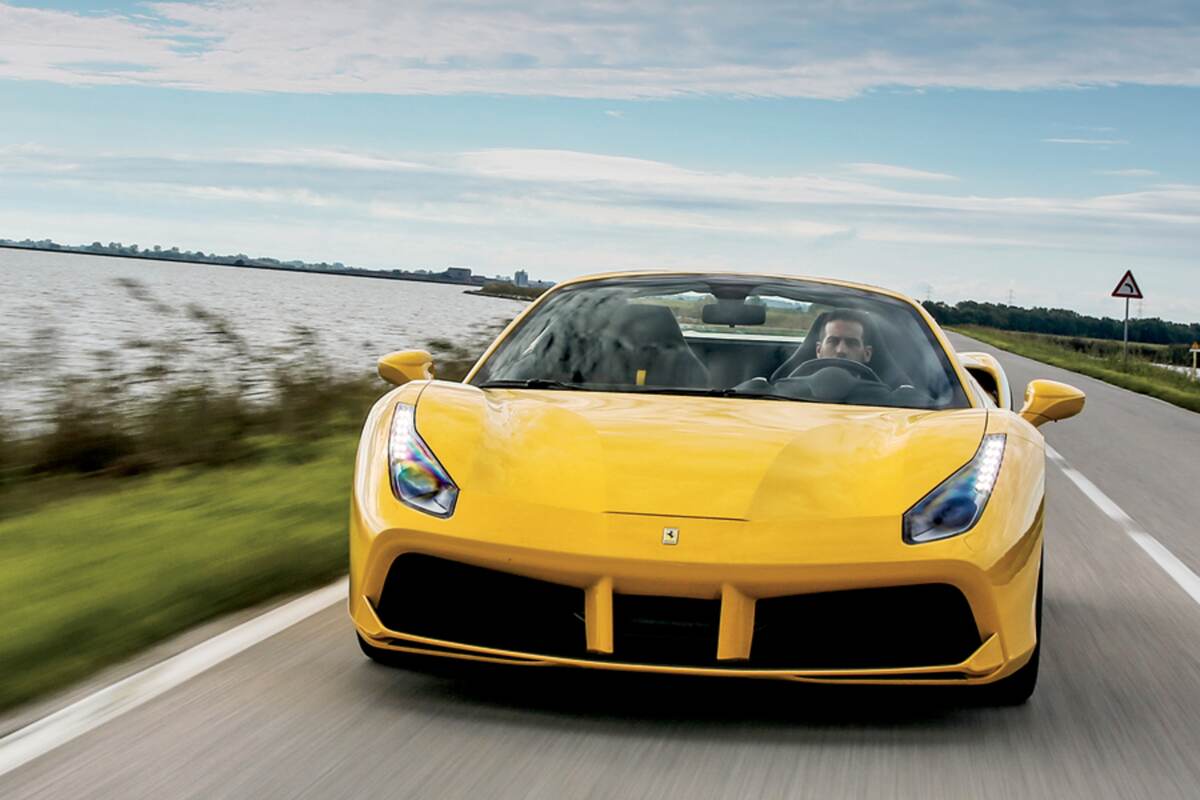 About halfway through the Ferrari technical presentation, I start losing my mind. I’m a reasonably mechanically minded guy—I know my way around gear ratios and damper rates, I’ve taken engines apart and rebuilt them—but this? This is so far over my head I’m starting to sweat with anxiety. There are charts and graphs and statistics and phrases like “variable flap geometry” and “ionizing currents.” It’s like sitting through a briefing about particle physics with the head of the Large Hadron Collider. If he spoke with a heavy Italian accent.

Now fast forward a few hours, to the beautiful morning sunshine and the open-air driver’s seat of a 488 Spider. The contrast couldn’t be greater. The incomprehensible engineering jargon has melted away, to be replaced by this sensational car, with its sublimely compliant ride, electrifying steering, and turbocharged engine pumping out a gargantuan 670 horsepower. All that nerdy science is happening right now, just beneath the surface, but none of it matters any more. This is the genius of modern Ferrari: Turning tech into something that feels natural, making software feel fluid and organic. I don’t care how it’s doing it, I just want to drive and drive until I run out of fuel.

Visually, the Spider is a very successful chop of the 488 GTB [“Unleashed,” FORZA #144]. It shares the coupe’s low, wide stance, muscular haunches, arrow-head nose, and those huge open scoops cut into the sides. The 488 is more aggressive and busier to the eye than the 458 it evolved from, but it successfully blends that car’s genes with an unmistakable look of its own. 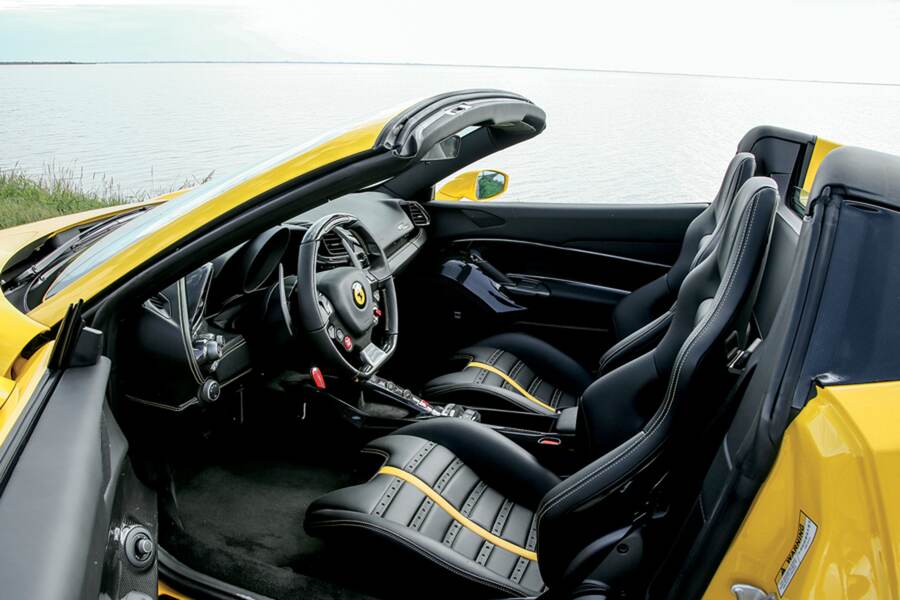 It’s also cleverly free of vulgar wings and jutting spoilers. This car has the lowest aerodynamic drag of any Ferrari convertible to date, yet downforce is improved over the 458. I’ll spare you the details (trust me, there isn’t room here) but the cleverest trick is the blown rear spoiler. Air flowing over the back deck is directed down through a slot, to exit from the middle of the rear bumper. This escaping air allows the top surface to have a more pronounced curvature, increasing downforce. It’s a neat solution, and it is, as the press release points out, Ferrari patented.

The folding hardtop is carried over from the 458 Spider. It’s a clever bit of engineering; as the motors whirr, it splits in two, folds like a piece of paper, and in 14 seconds drops quietly into a tray above the engine. This retractable lid is supposedly 88 pounds lighter than the equivalent soft top and it really does give you the best of both worlds, combining the snug security of a coupe with the sensory buzz of a droptop.

It’s no wonder the Spider outsells the closed car in most markets. (Spiders get driven further too, on average, and a Spider driver is more likely to have his or her partner sitting alongside for the ride.) The only downsides are a 110-lb. weight penalty and the lack of a rear-deck window, as on the F430 Spider, for spying on the V8 nestled in the back. 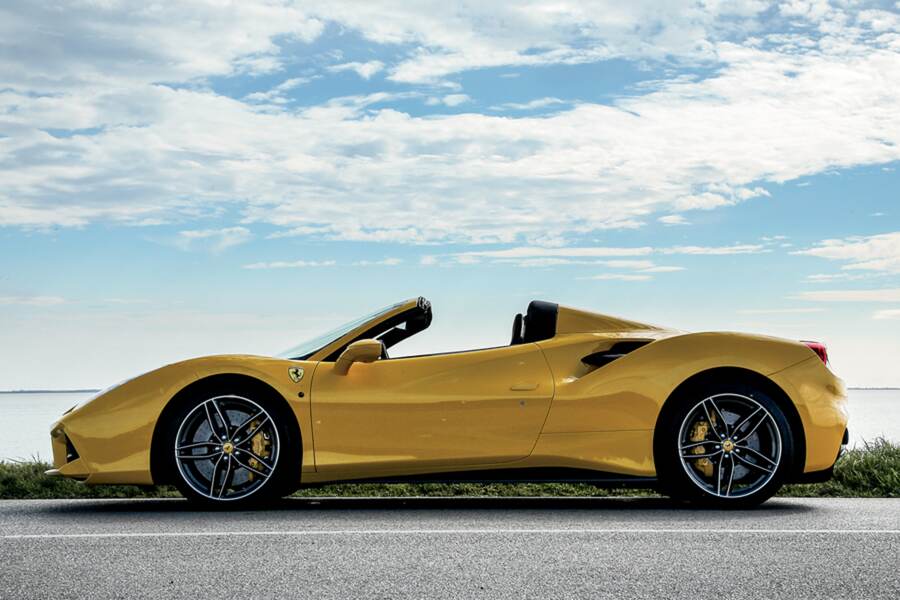 Like the exterior, the interior is clearly related to that of the 458, though almost everything is tweaked. Ferrari’s already impressive onboard tech has been enhanced with the addition of Apple CarPlay, but the cockpit is dominated by the now-familiar steering wheel: complex, ergonomically shaped, with the yellow and black Prancing Horse catching the eye like a bright bullseye. The little manettino switch sits on the right and, more compelling, there’s still a red Start button on the left. Time to go.

AS WE ALL KNOW BY NOW, the biggest change from 458 to 488 is the new engine, a twin-turbo 3.9-liter V8 in place of the old 4.5-liter normally aspirated unit. Fans, forums, and magazines have all been buzzing with opinions about the adoption of turbocharging, and sure enough, as soon as the Spider fires up you can hear the difference. Where the 458 whirred and fizzed, the new car burbles deeply—a low, hollow wuffle, right behind your head.

That bass note hints at the engine’s massive potency. Get moving, find a great road, and the 488’s speciality hits you square between the eyes; this is a monstrously quick car. Actually, that’s not a strong enough description. The 488 Spider is a hideously, catastrophically, mind-warpingly, brain-burningly fast car, one that will have anyone but the most seasoned supercar drivers wild-eyed with shock. Under full-bore acceleration, those passengers Ferrari talked about will be clutching the door trim in terror as their toes curl inside their shoes. 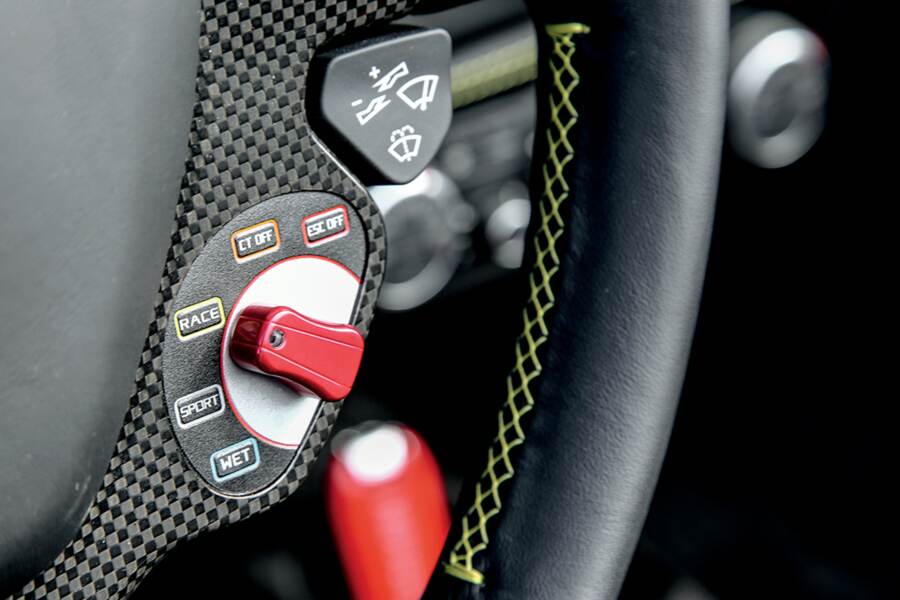 The new engine (a cousin of which resides in the front of the California T) delivers much more than expletive-inspiring performance. Perhaps fearing that the turbo V8 would be accused of being laggy or unresponsive, Ferrari’s engineers deployed everything in their Formula 1-inspired arsenal. The twin-scroll turbos’ shafts spin on ball bearings instead of bushings; the turbo wheels are made of an exotic titanium-aluminum alloy; special turbine-housing seals and high-tumble intake ports play their parts. Frankly, I think they’ve overcompensated; there is no lag, and the wall of torque feels like an irresistible tsunami.

However, there is a price to pay vis-a-vis the 458 for this sensational turbo output. While the two cars share the same seven-speed gearbox (though the 488 receives longer ratios and shorter shift times), the way you interact with the ’box is completely different, as is the resulting character. 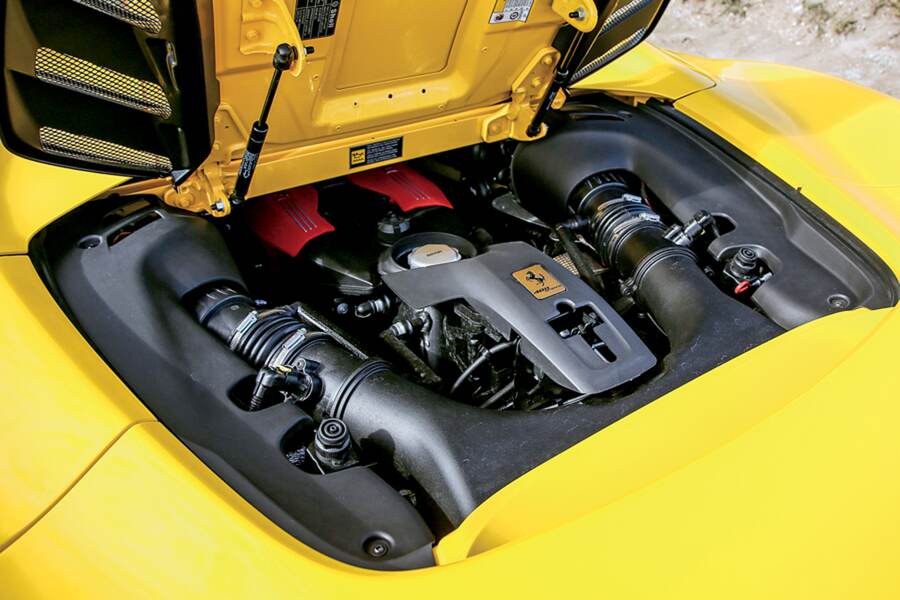 Chasing gears in the 458 was like riding a firework rocket. The revs would climb and climb to a crescendo and then boom—the gear change would snap home with an exhilarating crack-pop-whistle. The car was unbelievably satisfying to thrash, and you found yourself wringing out the performance in every gear, at every opportunity.

The 488 isn’t like that. Yes, it will rev to 8,000 rpm, close enough to the 458’s giddy 9,000 redline, but I rarely saw that during my Spider drive. After unleashing the turbo, I found myself short-shifting, surfing the massive mid-range wave of torque, carrying enormous speed everywhere but without feeling the need to squeeze out every last drop.

The torque is so strong, Ferrari has introduced a Variable Torque Management system, which releases the oomph available in progressive steps as you go up through the gears. The higher the gear, the more torque you have at your disposal, adding to the sensation of huge, swelling potential. Releasing it all in first gear would probably turn the car inside out. 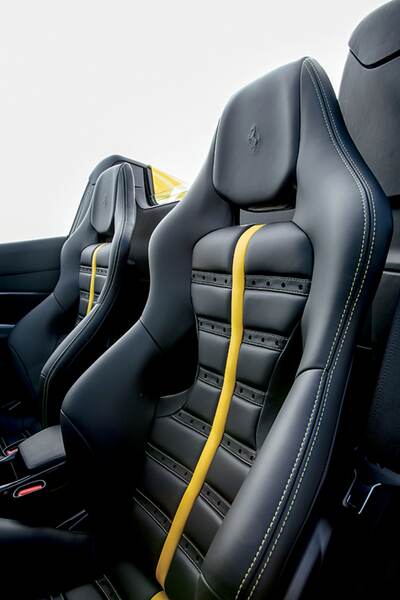 THIS DIFFERENT DRIVING STYLE makes the 488 a little less satisfying for the keenest of drivers (i.e., dinosaurs like me who still long for an old-fashioned manual gearbox), but it doesn’t mean the car is any less exciting. Not only is it faster—much, much faster—it handles the road more confidently. The steering rack is as quick and as accurate as we’ve come to expect in modern Ferraris and the ride quality and balance are truly exceptional. The 488 wears a new and improved version of the 458’s magnetorheological shock absorbers and there’s even a new version of Side Slip Control (SSC2). Where the original incorporated the stability and traction control systems along with the electronic differential, SSC2 also manages the shocks, softening the outside shock in a slide to help the slipping wheel find grip.

Combined, it all feels seamless and subtle, allowing you to point and squirt and play with the car without ever feeling like the electronics are cutting into your fun. Only the blinking traction-control light gives the game away—and it was blinking practically the whole time I was driving the car in anger, hinting at the torque-to-traction surplus. This got me curious, so for a while I disabled everything—twisting the manettino to ESC OFF—just to see….

Systems off, the 488 Spider immediately turns into a hooligan drift car, holding slides out of every corner at will. It’s balanced enough to be playful, despite the massive muscle at your disposal—proof that Ferrari’s engineering skills go far deeper than the software. With its aluminum chassis, brilliant brakes (based on the LaFerrari’s), and lovely-if-light steering, there’s plenty of traditional mechanical connection here to complement the ultra-high-tech electronics. 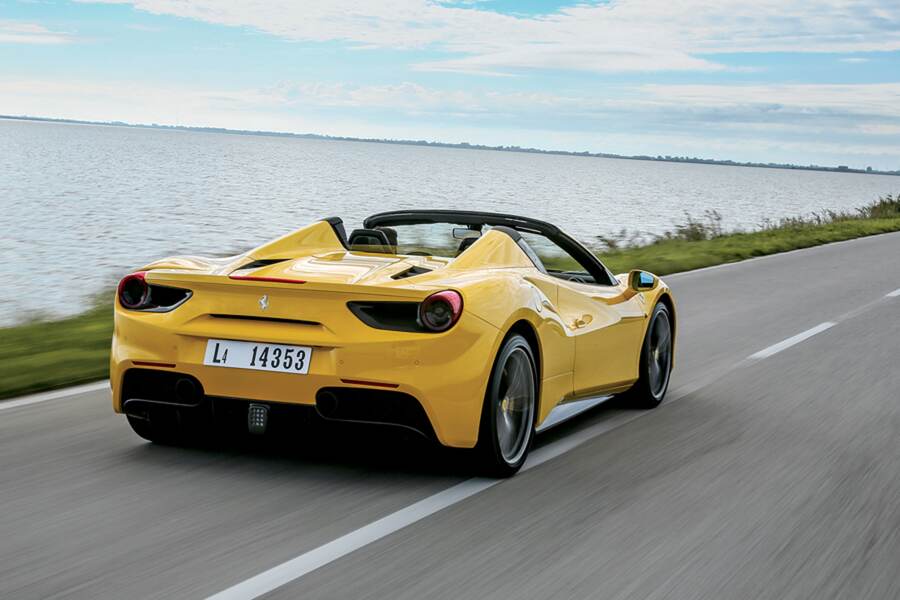 If there is a flaw, it’s that the 488’s aluminum chassis can’t quite match the stiffness of the carbon-fiber tub found in the competing McLaren 650S Spider. While the Ferrari certainly glides over potholes and bumps, allowing you to keep your foot down with confidence, you often feel the windscreen frame give a little shiver over the harshest bumps. It’s a sign the dampers are doing a better job than the alloy structure they’re attached to.

But really, that’s a very minor grumble. The 488 is a triumph, even in the context of replacing the 458, one of the all-time greats. The Spider blows away any skepticism with the immediacy of its responses, the scale of its performance, and the desirability of the drop-top roof and turbulence-free cabin. It even feels almost exactly like the GTB; gone are the days when coupes and soft-tops drove significantly differently.

Strip away the stats, the graphs, the software, and the science, and Ferrari’s newest Spider is ferociously fast and fun to drive. You don’t have to understand it; just enjoy the ride, and remember to hold onto your hat. 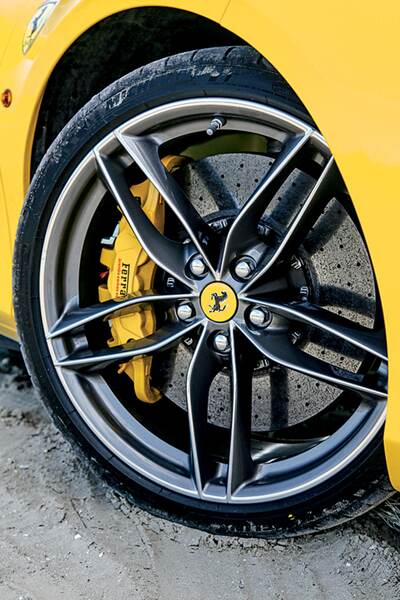 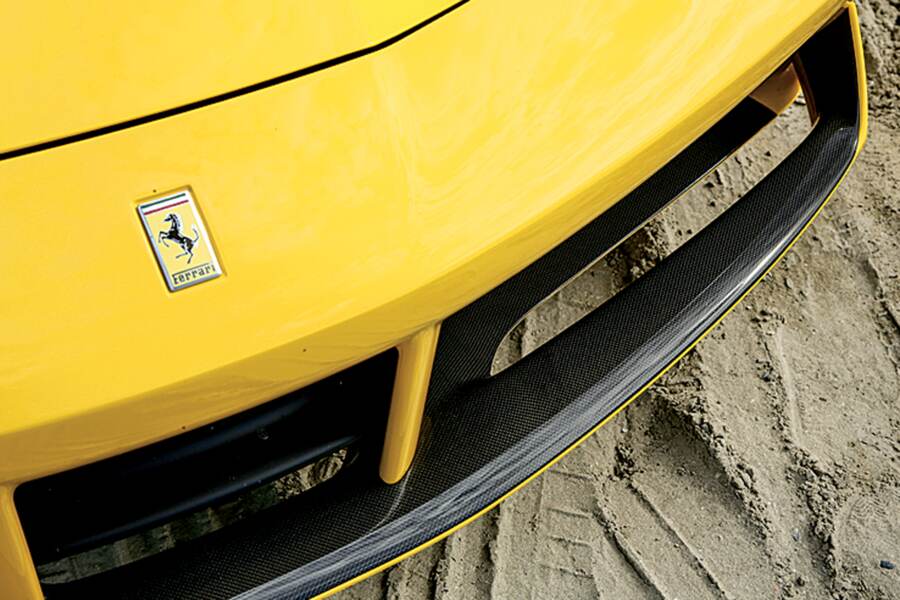 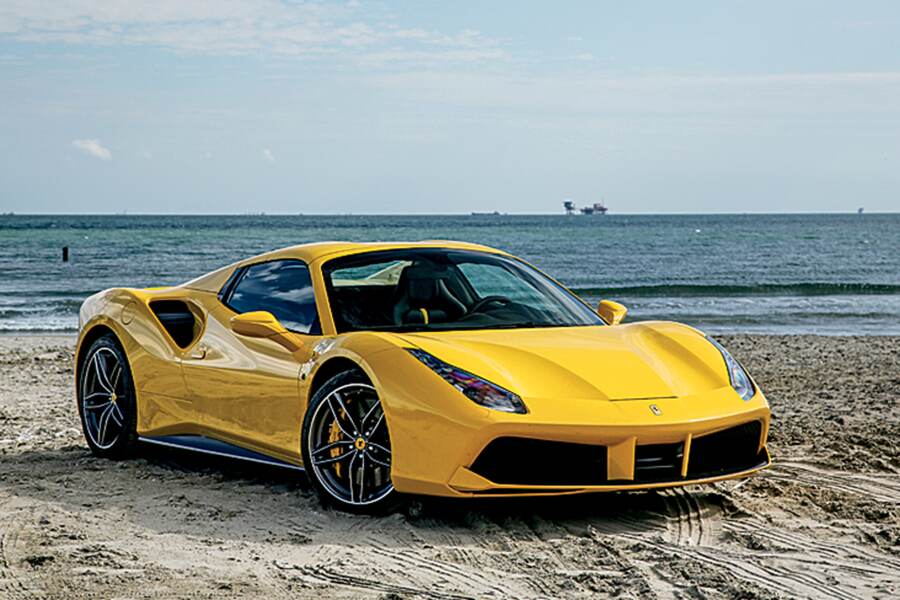 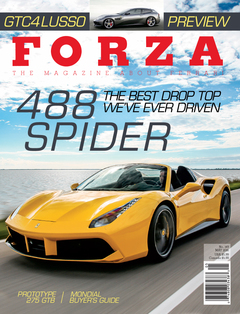