A brand-new restoration shop turned this race-prepped SWB into a concours winner—in less than three months. 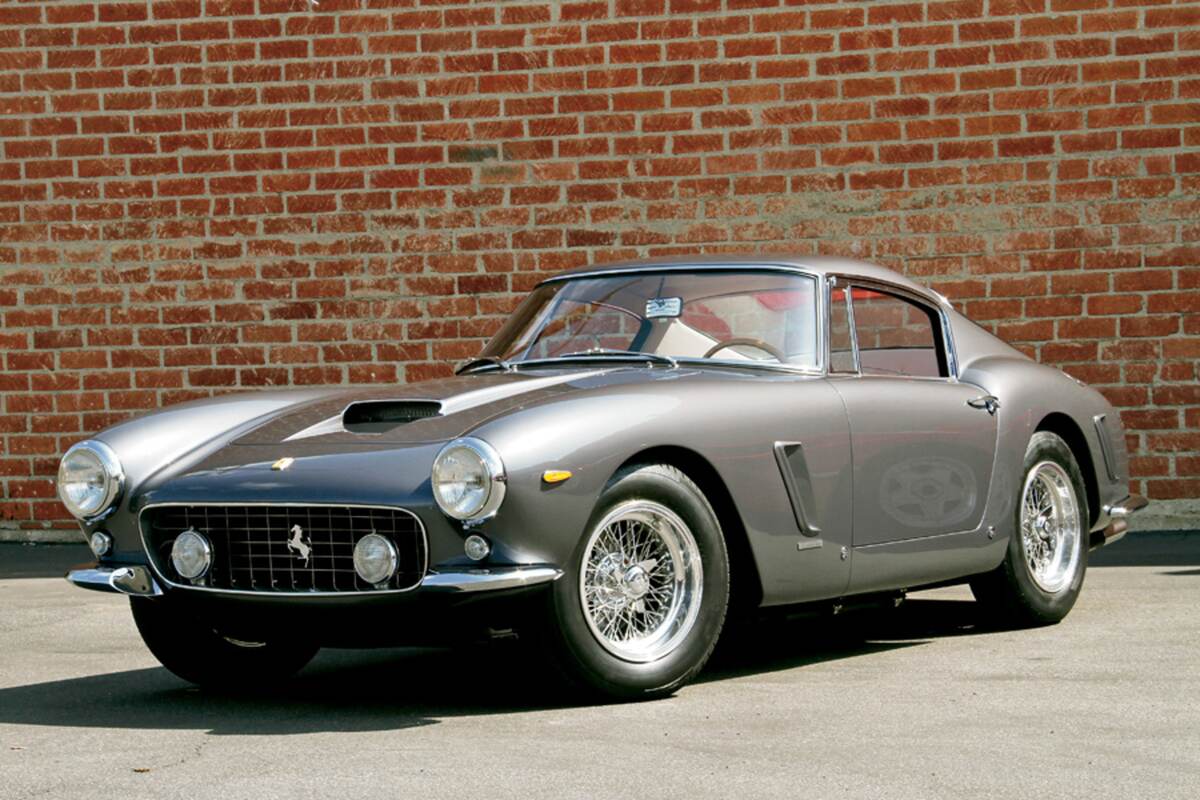 The SWB was ordered new by Monterey Historics founder Steve Earle. It bounced around various West Coast owners for most of the next 25 years until, in the late 1980s, Fossil Motorsports converted it to FIA-approved vintage-racing specifications. Fossil’s modifications including installing a rollbar and hot-rodding the engine with GTO headers, camshafts, and pistons, and a cold-air box, among other measures.

The Ferrari remained in this guise through several more owners, one of whom took the car, in 2001, to Motion Products for a respray in vibrant Giallo Fly paint versus the original dark red. S/n 3337 was shown in this configuration in the SWB 50th Anniversary class at the Pebble Beach Concours d’Elegance in 2010, and it’s notable the car was presented for display only. All of the mods likely would have been regarded as significant historical inaccuracies by the judges, although they made the Ferrari a perfect fit for its visit to the Monterey Motorsports Reunion in 2013. 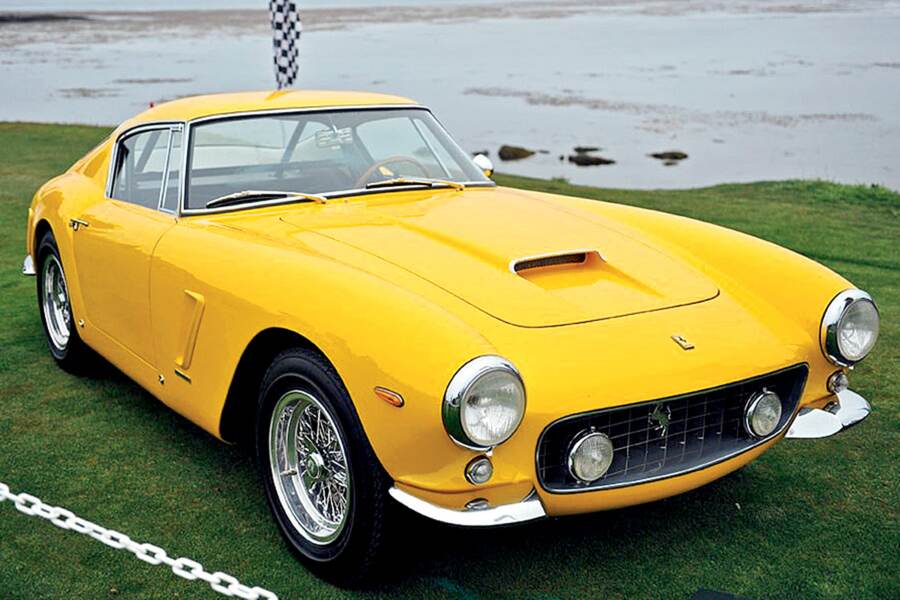 In 2014, s/n 3337 found a new owner—and that owner, Bob Cohen of Beverly Hills, California, wanted to restore the SWB to its original factory configuration. To Cohen, the question of which restorer to entrust his new Ferrari to loomed large.

“I was concerned about giving up a car I had just acquired, and having it disappear for a couple years for a top-to-bottom restoration,” he admits.

For a recommendation, Cohen turned to friend, collector, and fellow SWB owner Ron Hein, who introduced him to Rex Nguyen. As the longtime restorer for one of Los Angeles’ high-line vintage-car brokerages, the slightly built and sinewy Nguyen had worked on many great Ferrari road cars over the years. Following his Platinum-winning restoration of a Daytona in 2011 and a Dino a year later, Nguyen found himself receiving Lussos, 275s, and more, and was invited to become a Ferrari Club of America concours judge in 2012. 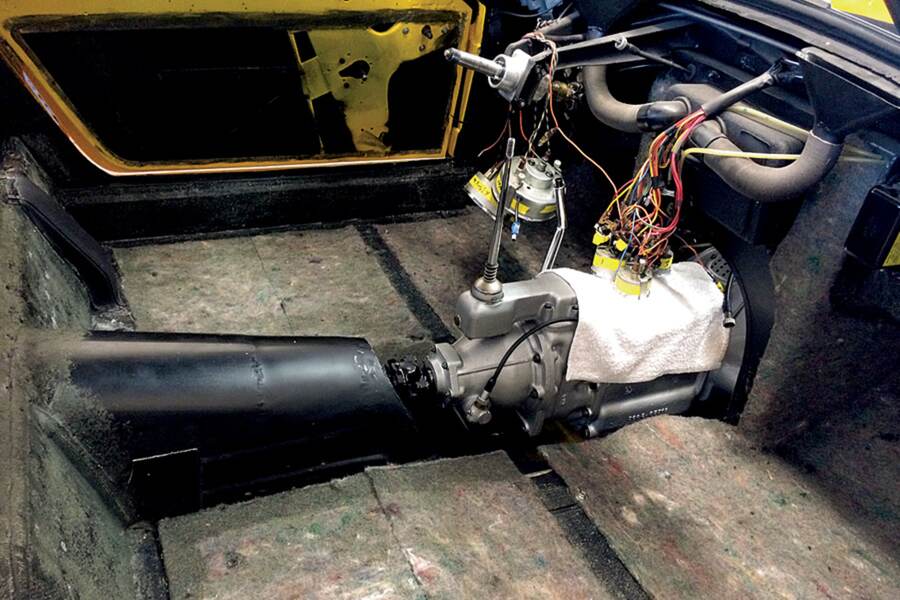 “I asked Rex what his opinion of the car was,” recalls Cohen, “and he essentially rattled off a list of things he would do if I wanted to convert it to a concours-type car as opposed to a track car. I thought I knew a lot about these cars but I was just totally overwhelmed with all I did not know, especially when he went through the car and pointed out things on it that weren’t original.”

Cohen was sold on Nguyen but wanted his undivided attention, something that wouldn’t necessarily be possible with the restorer’s current employer. So Cohen encouraged him to open his own shop, and, happily, that was all the motivation Nguyen needed to take a big step he’d long been considering. In early October 2014, Nguyen signed a lease on a shop in Marina Del Rey, and Rex Nguyen Restorations was born. Cohen flat-bedded the SWB to RNR the same day—even before Nguyen had time to arrange insurance for his new business.

NGUYEN’S FIRST TASK was to prepare the Ferrari for a fundraiser at the Petersen Automotive Museum in Los Angeles. The gala event focused on race cars, so Nguyen removed s/n 3337’s bumpers and clear bra. He also installed period-correct Pirelli tires and color-corrected, touched up, and polished the exterior paint, which bore the scratches and dings of vintage racing. 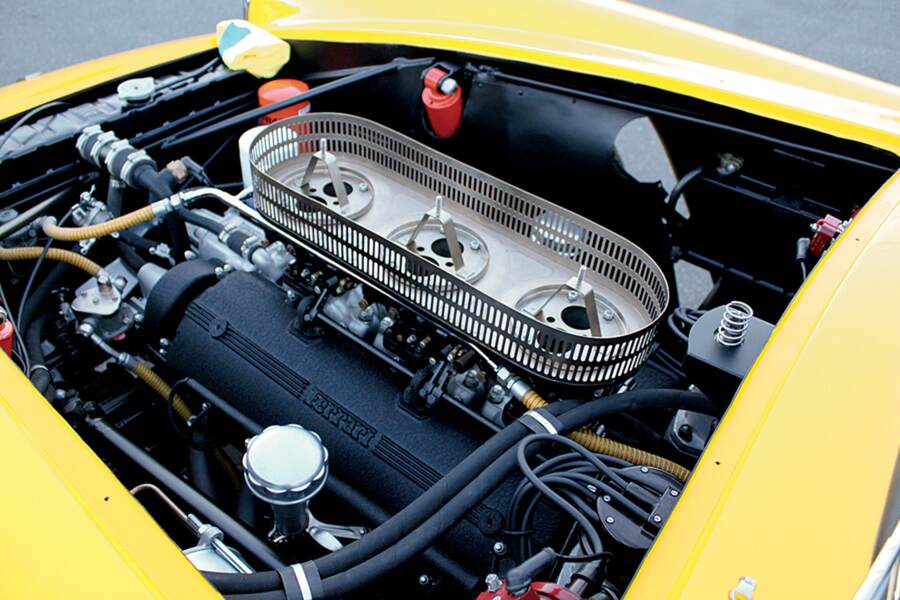 The race-ready SWB was warmly received by the Petersen crowds, but Cohen still wanted the car returned to its original street appearance. Sourcing parts notwithstanding, Nguyen’s greatest challenge was the owner’s timeframe: Cohen wanted s/n 3337 to be ready for the Cavallino Classic in January 2015, less than three months away.

As the first restoration conducted under Nguyen’s own roof, the Ferrari had to make a statement; this was a car that could literally make or break his fledgling operation. And so began the 16-hour work days.

Nguyen dedicated himself to returning the engine compartment to its proper configuration, removing the roll bar and racing harnesses, and bringing back the cockpit to factory-correct condition. Inside the car, only the seats and lower door panels were salvageable; new carpet was needed to hide the areas affected by the roll cage, while the incorrect vinyl trim and headliner was replaced with material with the proper grain and perforations. Nguyen also removed an exterior mirror that had at some point been attached to the driver’s door—a useful, but not original, item. 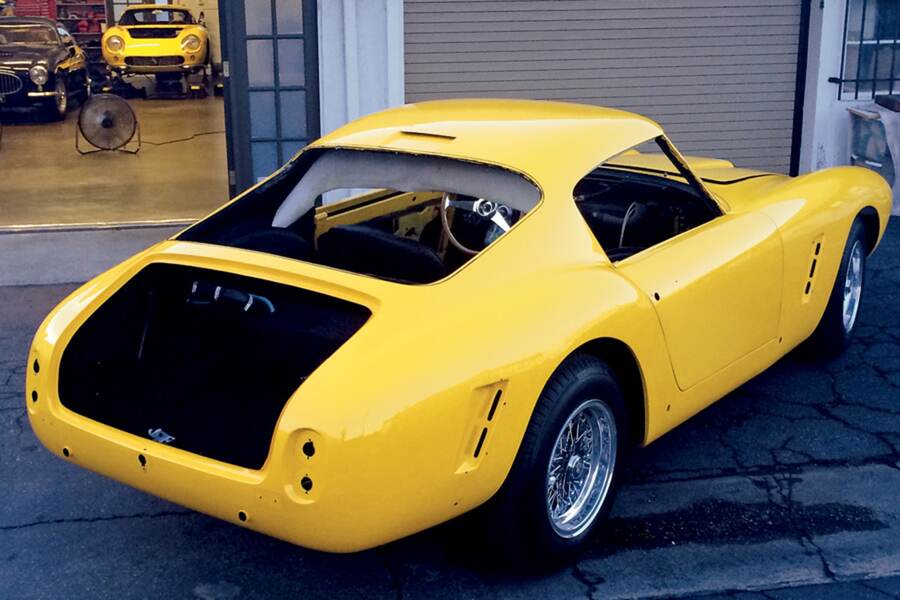 The Ferrari’s brakes and undercarriage were refinished, but Nguyen mostly left the upgraded engine alone, aside from fitting a standard air cleaner with the proper finish atop the still-original carburetors. There were plenty of other engine-bay details to sort, however. For example, the horns, along with the locations of the data plate and windshield-washer fluid bag, were incorrect for the 1962 model year.

“The car came to me with Marchal horns, which were correct for a very early SWB,” explains Nguyen. “Since this was a later production example, I replaced the compressor and trumpets with Fiamm parts.”

Other items were much less noticeable. “There are a lot of parts that people skip, all the way down to the heater valve,” Nguyen says. “There’s an on/off heater valve [on s/n 3337] that you can replace the diaphragm and re-use the screws, re-plate everything, and put it back together. Some people will instead just buy a new on/off valve, which will come with the incorrect hardware. Just those two tiny little screws, even though they’re little screws, it makes a big difference.” 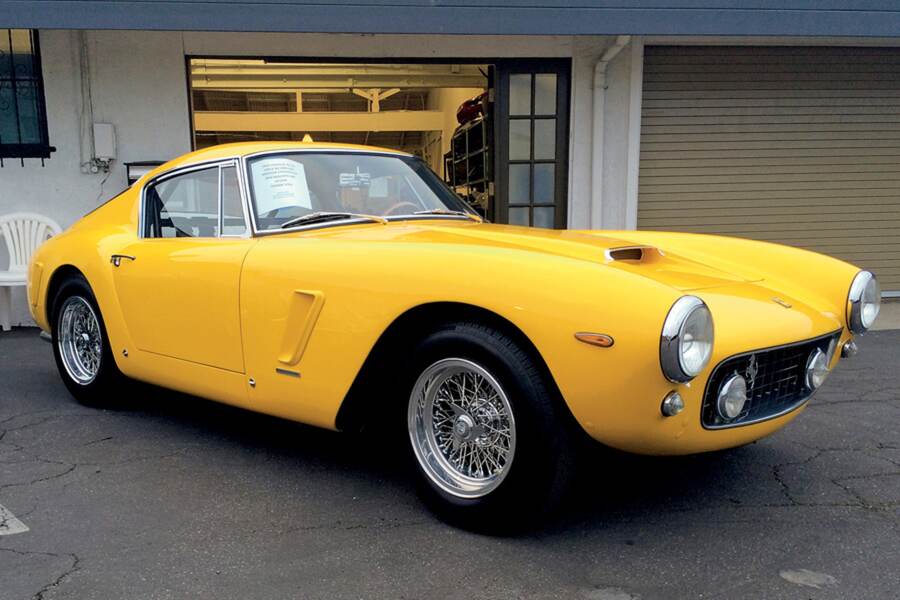 The job was completed on time, and Nguyen accompanied the car to Cavallino in January, placing it on the field and making himself available for the judges. “We let the judges know that we went the extra mile,” he explained, “doing things that most people wouldn’t do: using the correct hardware, trying to find the closest matching rivet, the closest matching screws for all the hardware, the nuts.

All the hard work and attention to detail paid off, as s/n 3337 won the Excellence Cup for Best Restoration. “Rex is able to look at a car and see what other people may not see, and really knows what to do to address each problem,” says a thrilled Cohen. “I also realized he is truly obsessive/compulsive in terms of getting things right.” 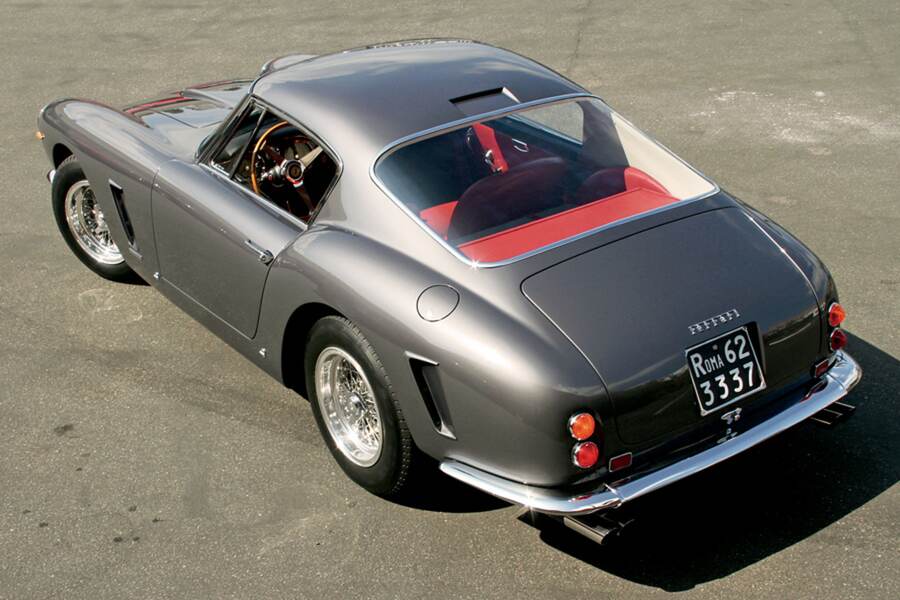 The affable Nguyen probably wouldn’t deny that last description. “I like doing the restoration of what’s behind, what you can’t see,” he explains, “because anybody can make anything look good on the outside. But what does it look like under the carpet? What’s it look like inside that fender panel?"

COHEN WASN’T FINISHED YET. After Cavallino, he approached Nguyen with a question: If you owned the car, what colors would it be? The restorer suggested an elegant combination of Grigio Ferro paint and a Red Vaumol leather interior with black and gray accents. Cohen was once again sold, and Nguyen once again embarked on another round of work. This time, with the bulk of the show season approaching, he had only two and a half months to work his magic.

Since the car had to be completely disassembled to be repainted and retrimmed, Nguyen took advantage of the situation to go through everything to the nth degree in his pursuit of perfection. But the tight timeline also introduced its own challenges. Nguyen’s first choice for correct seat upholstery, HVL in The Netherlands, could not deliver an order quickly enough, so the restorer contacted the reborn Connolly concern. 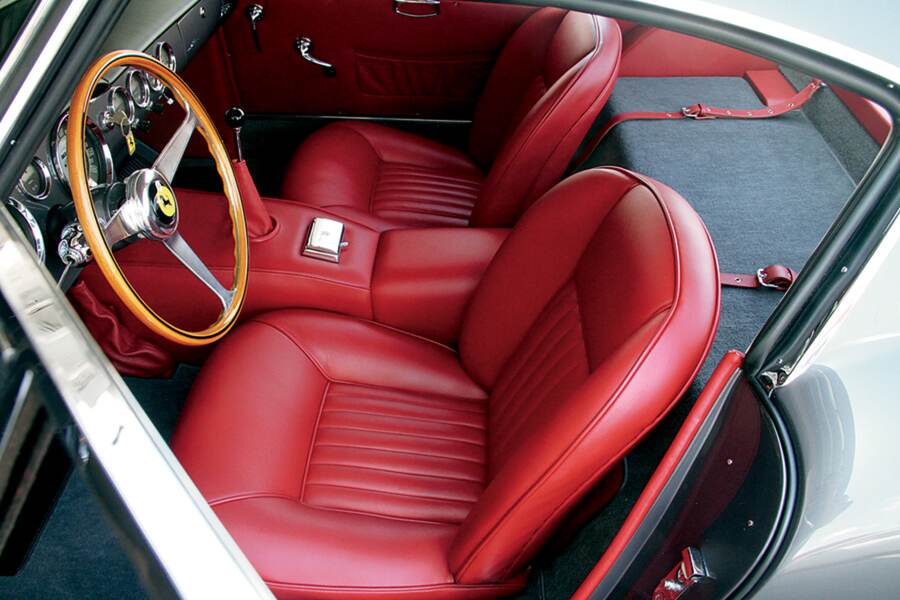 “We got to pick out our hides,” Nguyen recalls. “I had Jonathan Connolly pick out the best hides and pack them up. He made a total of twenty, and he gave us six of the best.”

Purchasing the leather was only half the battle. Nguyen wasn’t prepared to wait as long as two weeks for his goods to clear customs, so he sent his trusty right-hand man, Paul Sweet, to London to take delivery of the hides in person. Suffice it to say the large leather order didn’t qualify as a carry-on item for the return flight.

Sourcing proper carpets proved to be easier, with restorer Mike Regalia able to provide just enough original-stock gray carpeting to properly re-trim s/n 3337. “Mike has helped me a lot,” says Nguyen, who also credits Charles Betz, Allen Bishop, and the aforementioned Ron Hein as sources of obscure marque knowledge. “I guess you could say he mentored me years ago. To this day, he still helps me with what is correct, what isn’t correct, teaching me little things here and there.” 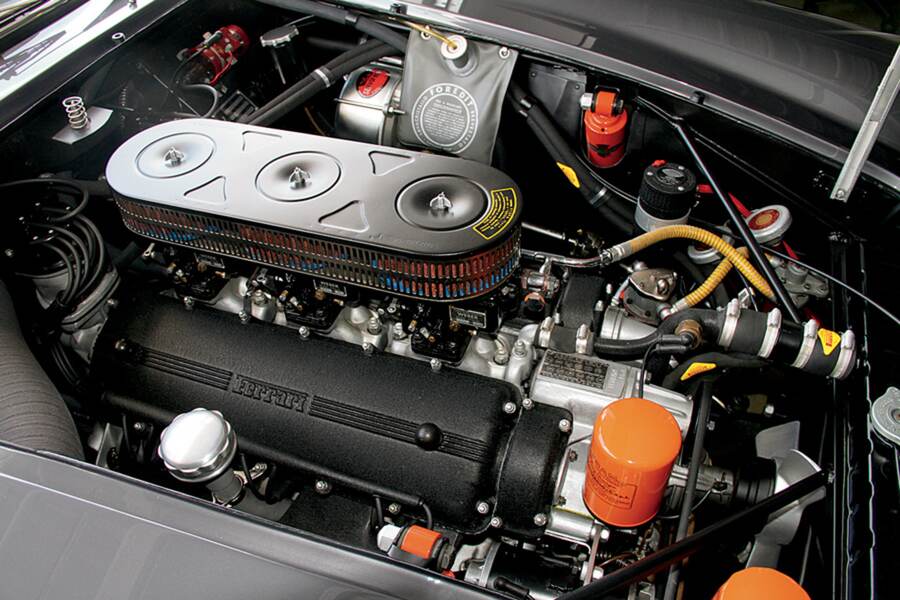 RNR once again met its deadline. The freshened Ferrari debuted at the Greystone Mansion Concours d’Elegance in Los Angeles in early May, taking Best of Show, and won the prestigious FIVA award at the Rodeo Drive Concours a month later. Then, at Monterey Car Week in August, the SWB won The Great Ferraris class at The Quail [“Showtime!” FORZA #146] and claimed another Platinum Award and the Best Road Car trophy at the FCA’s International Meet, where it scored a perfect 100 points. These trophies now sit in Nguyen’s office.

“He’s the one that really deserves them,” says Cohen. “Rex’s wealth of knowledge of Ferraris is just super impressive. And he’s such a young guy, that’s the amazing part.”

While s/n 3337 marked Nguyen’s first restoration as his own boss, it certainly wasn’t the last—his phones have been ringing off the hook since the SWB started making the show-circuit rounds. With a staff of just six, including a dedicated in-house engine man and an upholstery trimmer, RNR barely employs enough people to meet the volume of jobs, which has compelled Nguyen to spend more than his share of nights sleeping in a loft perched over the shop. 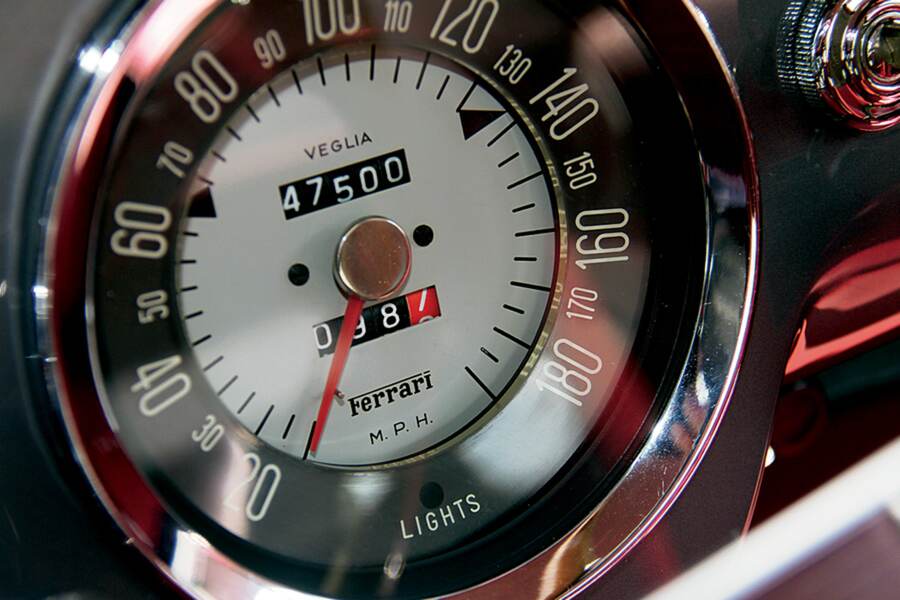 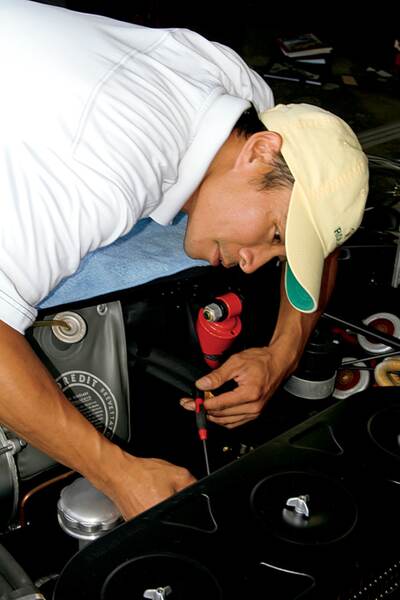 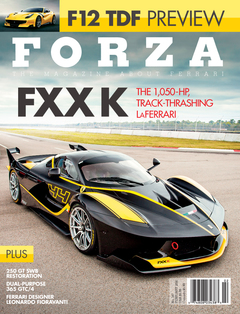