Consistent results have put the Tudor series’ two full-time Ferrari teams in good position to fight for the championship. 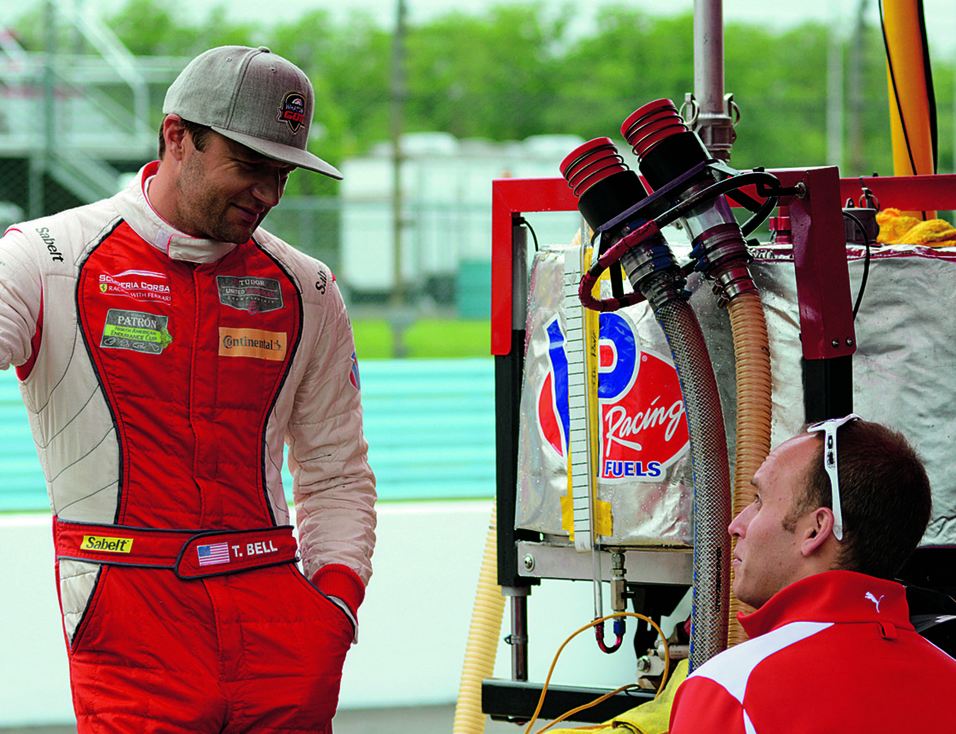 WATKINS GLEN International Raceway has hosted everything from Formula 1 to NASCAR over the last seven decades, but it’s quite possible the most competitive racing the storied New York circuit has ever known has taken place over the last two years. With strong manufacturer involvement and many of the best drivers and teams in the world competing, the two GT classes of the Tudor United SportsCar Series offer hard-fought, dramatic, fan-thrilling competition between Ferrari 458s, Porsche 911s, BMW Z4s, Chevrolet Corvettes and SRT Vipers.

There are only two Ferrari teams competing full-time in the Tudor series in 2015: Risi Competizione, with drivers Giancarlo Fisichella and Pierre Kaffer, in the GTLM class and Scuderia Corsa, with pilots Townsend Bell and Bill Sweedler, in GTD. Both squads use the venerable 458 Italia, which may be in its last full season of racing before the arrival of the 488 GTB in 2016. Though neither Ferrari team had won a race yet this year coming into Watkins Glen, the midpoint of the 12-event season, both teams left New York well positioned to fight for their respective class championships.

Risi battles the factories in GTLM

Despite being a one-car privateer in a field of predominantly two-car factory entrants, which plays havoc with available race strategy, Risi has been competitive so far this season. The Houston-based team started off the year with a strong performance at the 24 Hours of Daytona, until an engine misfire dropped the #62 Ferrari to ninth place at the finish. Risi bounced back with second-place finishes at Sebring and Long Beach, followed by a fourth at Laguna Seca.

Prior to the fifth round of the GTLM season at Watkins Glen, series organizer IMSA gave the team approval to use a new aero package with a revised undertray as well as a new front splitter and reworked dive planes that give more downforce. Such Balance of Performance changes aim to level the playing field between the different cars, and while they are usually not significant from the fans’ perspective—the entire class is generally covered by less than a second in qualifying and lap times—they are nonetheless crucial for success, even with a car as advanced as the 458. 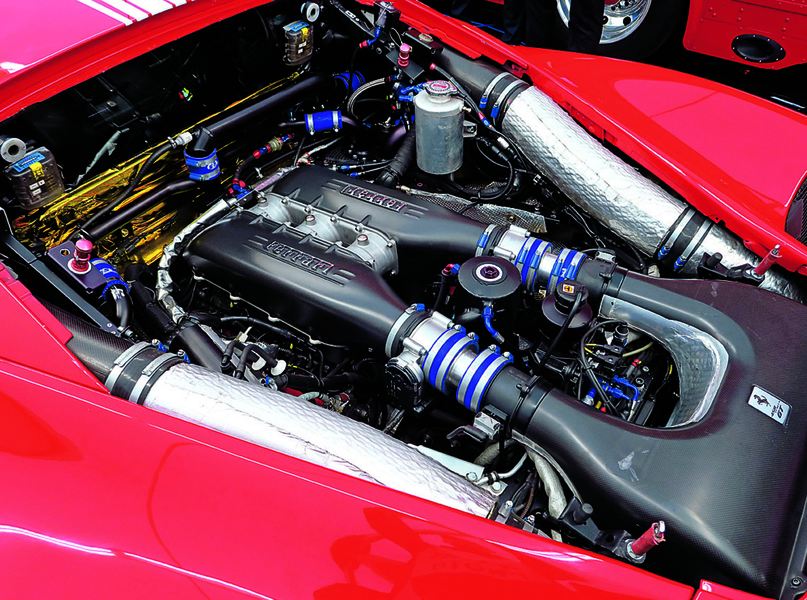 While the new aero will provide a definite advantage at future events, it didn’t play much of a factor at Watkins Glen. Performance was dictated by the weather: Qualifying was canceled due to heavy rain, and in the race the teams had to deal with a track surface that was constantly changing. The race was actually red-flagged for 15 minutes due to heavy rain and finished under caution (one of seven full-course yel-lows) when an accident occurred near the end. Aside from a penalty for speeding in pit lane, the Risi car had a relatively trouble-free race and finished fifth in class.

At the moment, the GTLM championship is far from decided. Fisichella and Kaffer are tied for second in driver points with BMW’s Lucas Luhr and John Edwards, while Corvette drivers Jan Magnussen and Antonio Garcia are tied with BMW’s Bill Auberlen and Dirk Werner for first. Ferrari sits last in manufacturer points, behind BMW, Porsche and Corvette, but is actually less than 20 points behind the leaders.

Risi is optimistic about its chances for the second half of the season, as the series heads to tracks that the Ferrari is usually strong at. “It’s been a reasonable season so far with our results, considering we’re a one-car privateer team competing against mostly two-car factory teams,” said team boss Dave Sims. “The downforce kit we’ve been allowed since Laguna Seca has helped from a driving standpoint, and we have a big advantage with our crew on pit stops. We’re still the quickest in the pits.”

Scuderia Corsa gets a boost at Le Mans

Like Risi Competizione, Scuderia Corsa has managed to stay in the championship hunt in the GTD class without winning a race so far this season. The team started off with a sixth-place finish at Daytona after the car suffered from a clutch issue, but followed up with strong third- and fourth-place finishes at Sebring and Laguna Seca. Unfortunately, the #63 Ferrari suffered a DNF at the Belle Isle circuit in Detroit, the fifth GTD race of the season, after it was hit by a prototype. 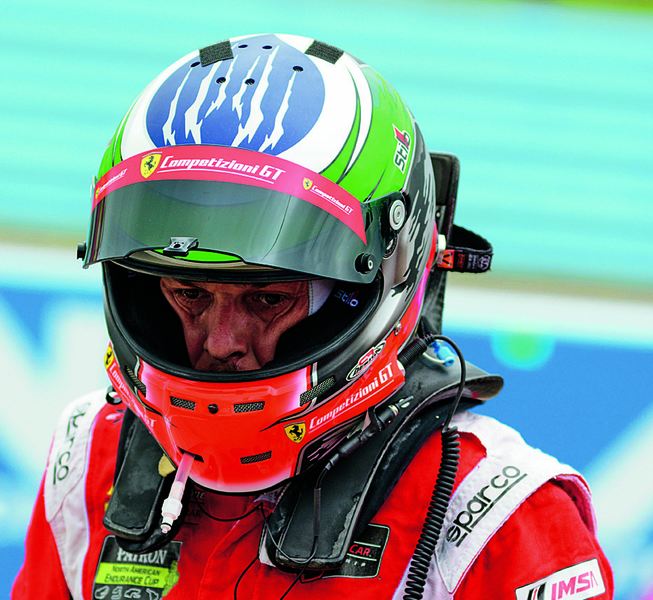 After Belle Isle, Scuderia Corsa took on a new challenge: the 24 Hours of Le Mans. With an all-American driver lineup of regulars Townsend Bell and Bill Sweedler, along with former Grand-Am champion Jeff Segal (who also joined them at Daytona), the team finished in third in the GTE-Am class behind the winning SMT Racing Ferrari 458 and the Dempsey-Proton Racing Porsche 911.

“If you looked at us on paper, we were a new team to Le Mans, with a group of team members that hasn’t worked together before and three drivers that had no Le Mans experience,” said Bell. “You could have made a very valid argument that we would be the first car out of the race. The fact that we finished on the podium was terrific!”

Scuderia Corsa team owner Giacomo Mattioli had been to Le Mans before as a car owner with Risi Competizione, but it was very rewarding for him to stand on the podium as a team owner. “Le Mans was a fantastic experience,” he said. “It was a challenge with our team based in the U.S. and with no experience at Le Mans. We relied on Michelotto, which gave us tremendous support in car preparation, and we also obtained help from Kessel Racing, which is a great outfit. It was like a dream team that came together and they gelled like they had worked together for seasons.” 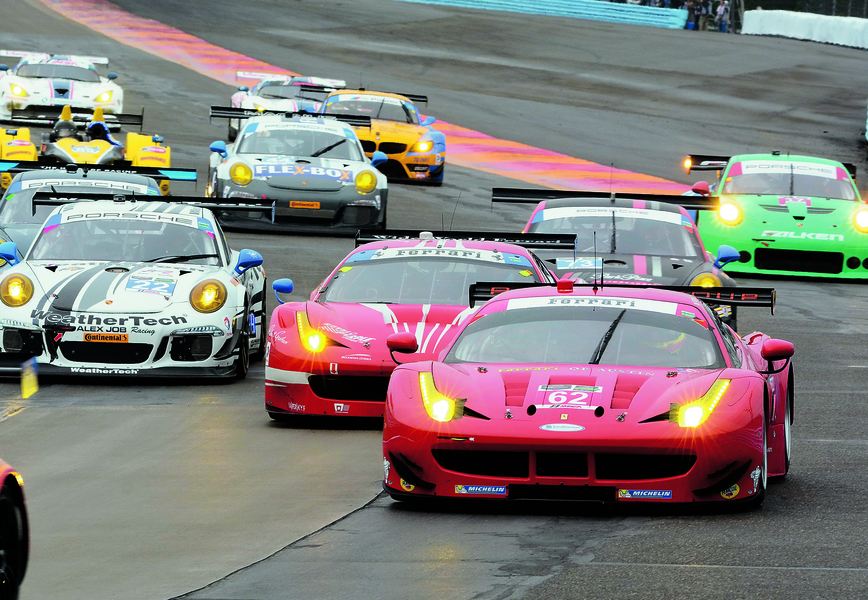 While part of Scuderia Corsa was racing at Le Mans, the rest of the team was busy rebuilding the GTD-class 458 for Watkins Glen. Like Risi, the team received a beneficial Balance of Performance adjustment, which removed 25 kilograms (about 55 pounds) of weight and added 100 rpm to the Ferrari’s rev limit.

Scuderia Corsa faced the same weather challenges as everyone else at The Glen, but they kept the car out of trouble and ended up fourth in GTD. “This was an incredibly difficult race,” said Bell. “The track was changing throughout the entire six hours, and we were fighting to stay on the dry line with traffic coming because there was so little grip off-line. I’m glad we brought the car back without a scratch and we will focus on the next race.”

After Watkins Glen, Bell and Sweedler sit third in the GTD driver standings, just 11 points behind leaders Christopher Haase and Dion von Moltke, who drive an Audi R8. Ferrari is second in manufacturer points behind Audi, while Scuderia Corsa is third in team points. Ferrari does lead the GTD manufacturer’s championship in the North American Endurance Cup, which awards points for the Daytona, Sebring, Watkins Glen and Petit Le Mans races.

Like their GTLM counterparts at Risi Competizione, Scuderia Corsa expects the 458 to be very competitive throughout the second half of the season. “As we get into tracks with more flow and higher minimum speeds it really plays to the strengths of the Ferrari with its balance,” says Bell. “Now that the performance seems to be more level with the competition, I’m really excited to just go race!” 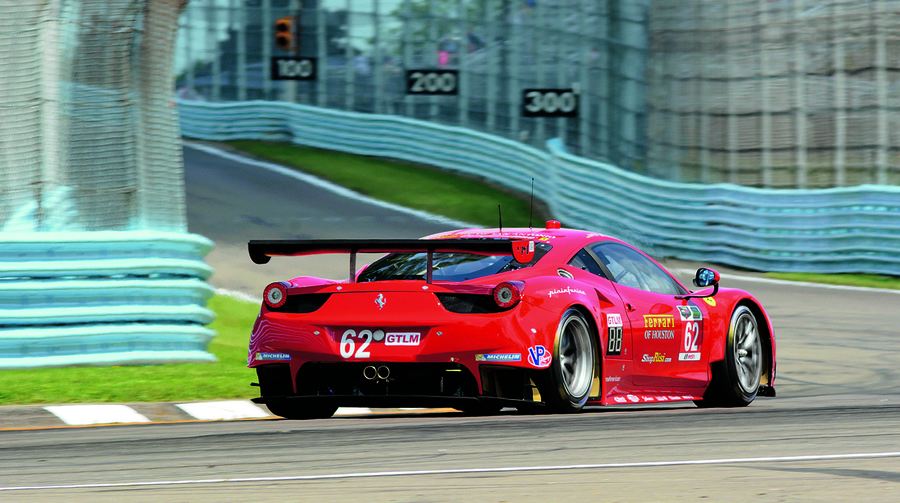 The two Ferraris run nose to tail following a full-course yellow at a wet Watkins Glen. 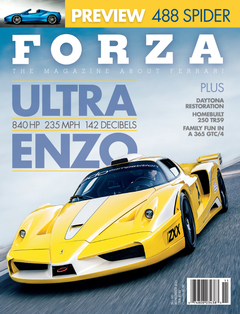