Enthusiasts who spotted this 275 GTB/4 (s/n 10803) at the Pebble Beach Concours d’Elegance or the Cavallino Classic last year might not have taken any particular notice. That’s no surprise, since s/n 10803 looks like most every other nice, clean four-cam out there, with its standard steel bodywork and optional Borrani wire wheels. It’s a handsome car, especially in that Blu Scuro hue, but at first glance there’s nothing special about it.

A closer look, however, reveals some surprising blemishes for a concours entrant, far more than simple rock chips from road use. There’s a silver dollar-size touch-up on the nose and some crazing in the paint near the right taillight. The chromed exhaust tips are lightly pitted. The finish on the hatch-release button is worn. The sidewalls of the Michelin tires are cracked with age, and all of them have a dab of red paint.

Here’s the thing: That red paint is original. As in, it was on the tires when this Ferrari left the factory in 1967. According to owner Peter Klutt (pronounced “kloot”), the workers who mounted the tires would mark the side of the tire that would be visible with red; green went on the opposite side. 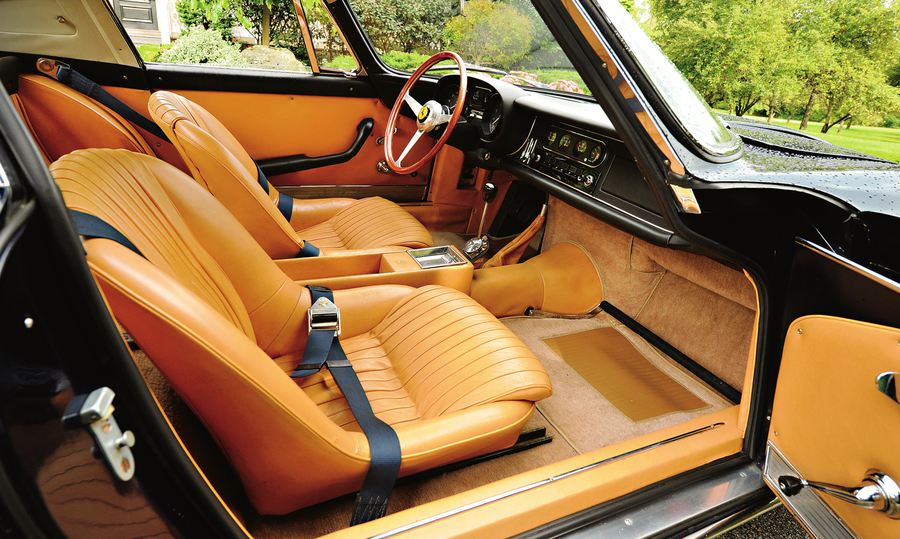 Those small red marks are some of the many details that reveals this four-cam’s significance. What significance? This 48-year-old Ferrari is entirely original.

“Well, there’s one non-original hose clamp,” corrects Klutt, “and the battery’s been changed. Other than that, the tires are original, it has the original mufflers and every brake line, fuel line and hose clamp—except for the one—is original. So is every stencil on the fuel pump, every stencil on the coil. It’s just amazing how original this car is.” 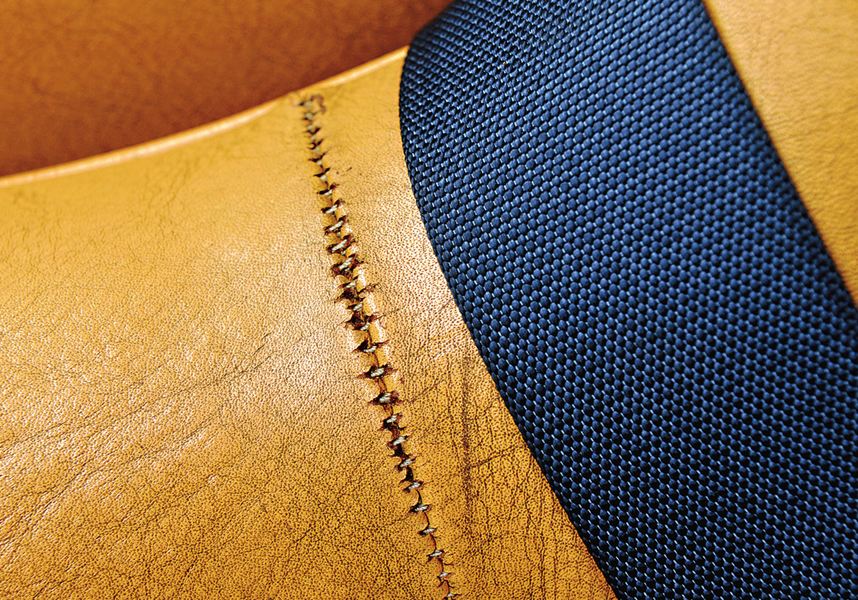 It’s an impressive lineup, but to me, at least, it seems a little unusual. That’s because Klutt is the founder and owner of Legendary Motorcar Company, in Halton Hills, Ontario, and has been in the restoration business for 30 years.

“Owning a restoration shop actually makes you really appreciate a great original car,” he comments. “When we and everyone else started doing these cars, it was our interpretation of how it left the factory. But when you get a truly original car, you see how they really did it, what the quality was really like. You can learn a lot from unrestored cars, and they always, always drive differently than a car that’s been taken apart.”

An original car is also worth more than one that’s been restored, and Klutt, who buys and sells cars in addition to restoring them, thinks there should be even more of a premium for originality. “Collecting is all about how rare things are,” he says. “If they built 100 cars and only five are unrestored, that puts those five in a different category. Up until recently, cars brought more if they were shiny like new, but I think that tide is changing. Car collecting is relatively new, maybe 50 years old, where art and furniture and just about every other art form has been around for thousands of years. In all those cases, the original one brings more money.” 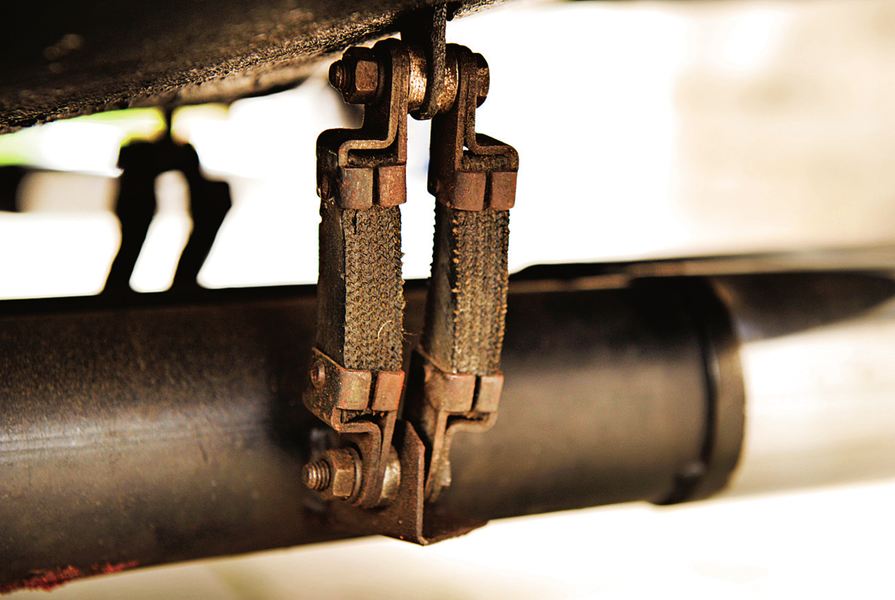 Original exhaust hangers are made of fabric

Klutt didn’t buy the Ferrari in order to sell it, however. “The whole pleasure for me is hunting, buying, owning and sort of experiencing the car,” he explains. “I’ll take it out every once in a while and just drive up and down the roads around here. It’s just turned over 10,000 miles since I’ve had it.”

S/N 10803’s HISTORY is an important facet of the ownership experience for Klutt. The four-cam was originally delivered to Chinetti Motors, in Greenwich, Connecticut, where it was purchased by its first owner. “For its first six months, the car was owned by a guy named Edward A. Skae, Jr.” says Klutt. “He was apparently a wealthy young guy who traded cars every few months. He traded in a [Maserati] Ghibli and a [Lamborghini] Miura on the four-cam, so Chinetti owed him money. I have the serial numbers of all three cars on the cancelled check.”

In September 1968, Skae sold the Ferrari to Carl Gagilano of Milwaukee, Wisconsin. “I met his son in the early 2000s [Carl had since passed away] when we were both racing Corvettes at Road America,” says Klutt. “We were in the same group and just struck up a conversation. He mentioned the four-cam and I said, ‘If you ever want to sell it, let me know.’ But he would never let me see the car so I was never sure it existed. 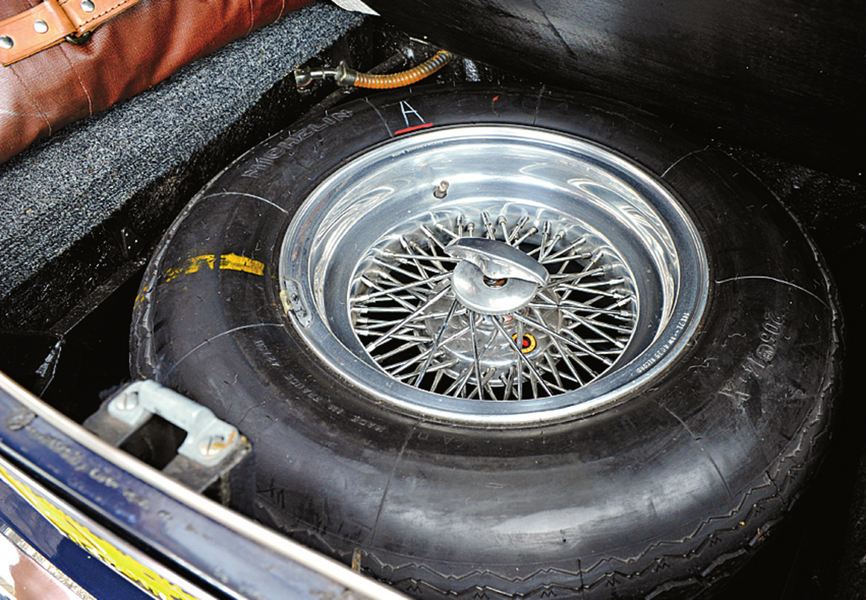 “The irony is that he would always ask me what I’d pay. I’d look at the highest sale of the year and offer significantly more. He always thought I was being respectful with the price, so that’s what kept him taking my calls.”

It took seven years of calling every few months, but in the early 2010s Gagilano’s family finally agreed to sell the Ferrari. “A lot of collectors say ‘I’ll never sell the car,’ but you know what?” asks Klutt. “They always come up for sale. Something changes, and someone wants to get rid of it. Is everything for sale? Eventually yes, but not necessarily this year, or even in five years.”

Klutt was excited when the car arrived at Legendary, and his excitement grew once he started to inspect his new purchase. “The car had been sitting for a ton of years, and during that time the owner had greased everything and oiled the underside [to prevent corrosion],” he says. “He also claimed it had never been washed in all that time. Maybe a year and a half before I bought it, he’d taken the car out and driven it to a car show in Wisconsin. He drove it maybe 50 miles with the grease and oil still on it.” 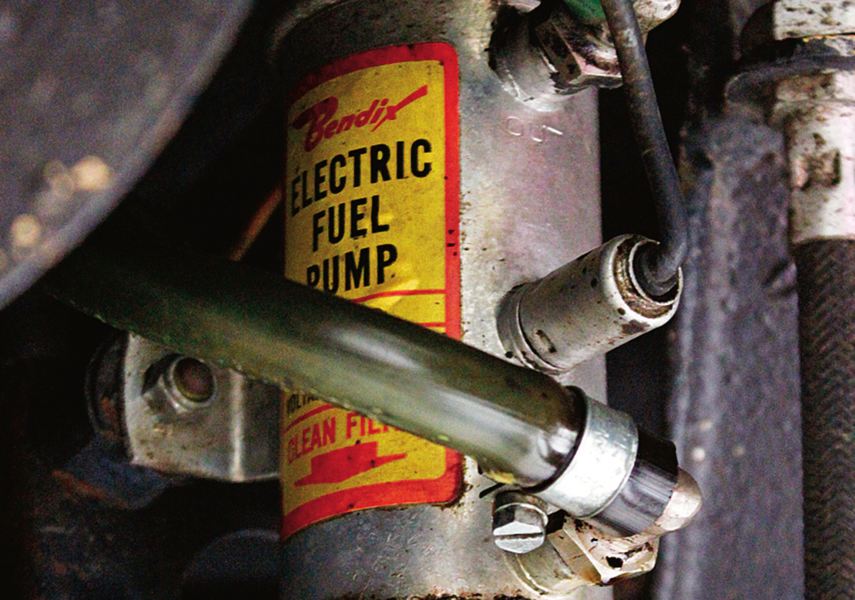 As a result, the 275 GTB/4 was in astonishingly good condition for its age. “The only damage on the car was from when a little lawn roller had gotten away from the owner and put that small ding in the nose,” says Klutt. “There was a $200 receipt from where he had to blow it in, but the repair was visible upon close inspection. I struggled with that one, but in the end figured it was part of the history of the car, so just left it.”

The exterior was just the beginning of the good news. The spare tire still had paint and chalk marks from the factory, and the jack in the tool kit was still wrapped in the original paper. As the crew at Legendary began to clean off the preservative oil and grease, they discovered more historical artifacts.

“The neat thing is that, once we cleaned it up, all the draw marks [made by factory] were like new,” reports Klutt. “All the paint dabs on the front end, the bare nickel on the spindles, the draw marks on the bare metal, we could see them all. The undercarriage of that car is mind-boggling” 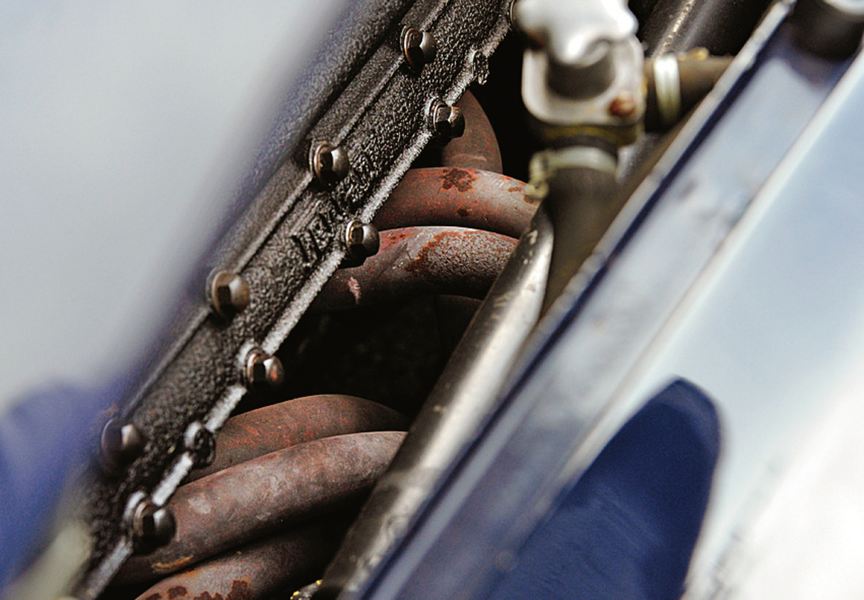 At the time, the Ferrari was wearing newer tires, but the originals came with the car. Klutt had them remounted, then turned his attention to the one area of the car that needed mechanical care.

With the Ferrari cleaned up and road-worthy, Klutt knew he had to show it. In August 2013, the GTB/4 was sent to California for Pebble Beach; the following January, it went to Florida for Cavallino. Both shows validated Klutt’s impression of the car. At Pebble, s/n 10803 finished second in the Preservation class. It did even better at Cavallino, winning Platinum Awards in both restored and unrestored classes and taking the Preservation Cup for vintage Ferraris. 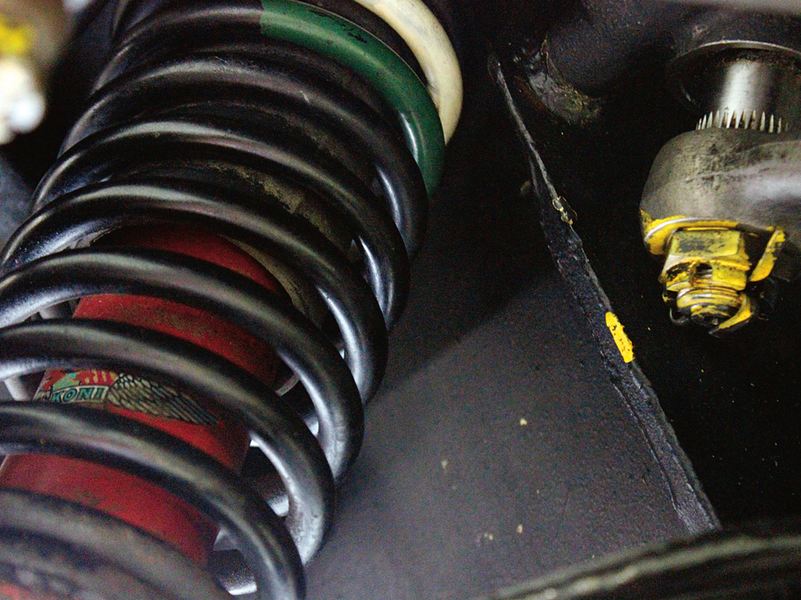 Yellow paint used to indicate bolt had been tightened, green and white marks are code for spring rate

What’s next for this wonderfully preserved Ferrari? “I plan to just drive it a little and enjoy it,” says Klutt. “In terms of shows, I think we’re done. I mean, it scored awards at Pebble Beach and Cavallino. I’m thrilled with that.” 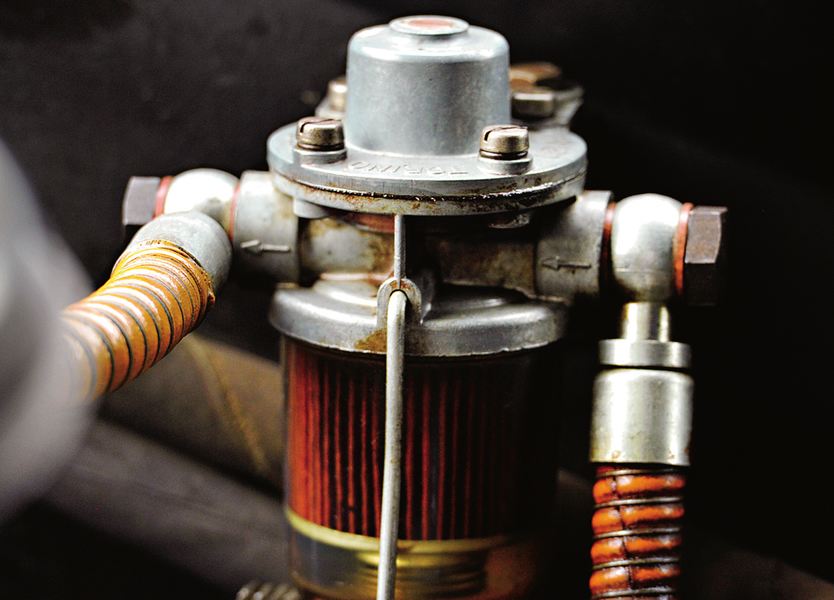 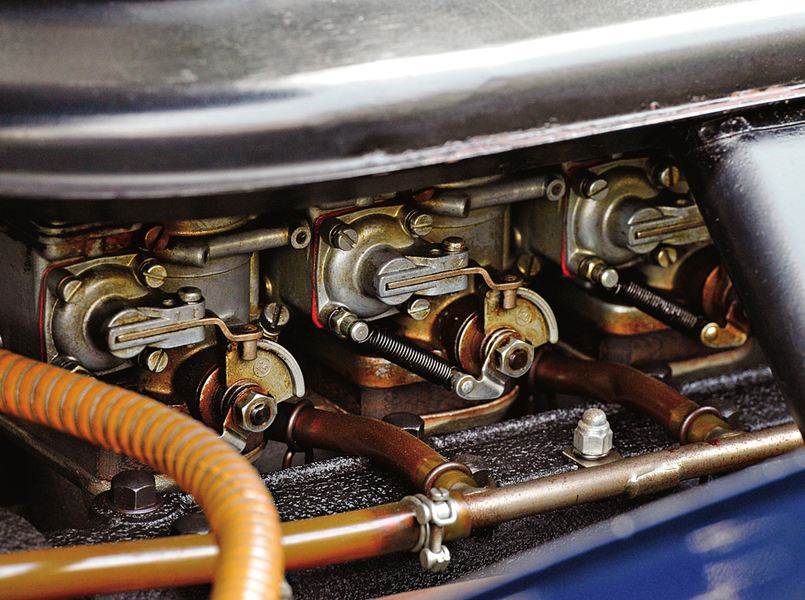 Engine bay shows signs of age but everything works as expected. 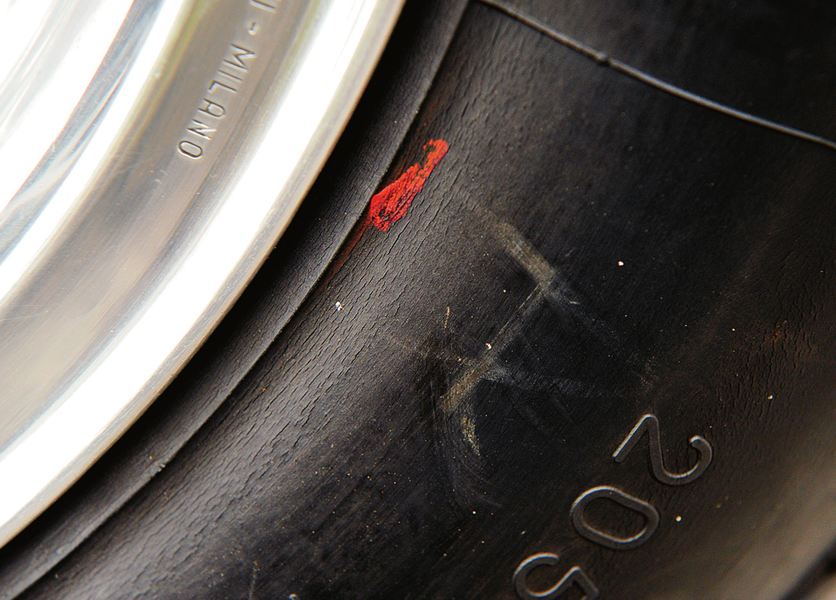 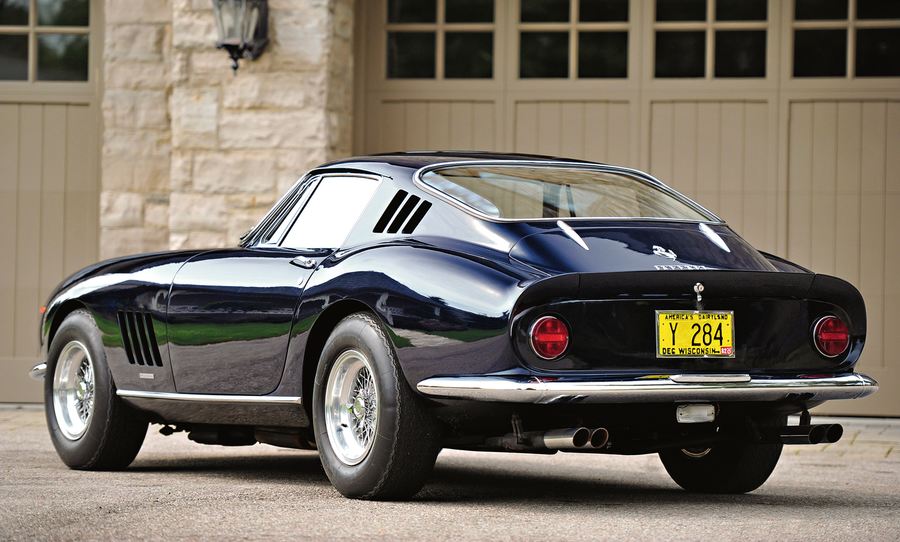 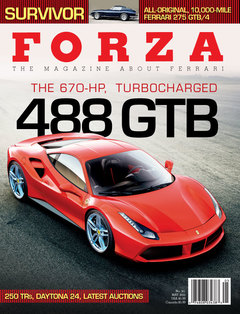