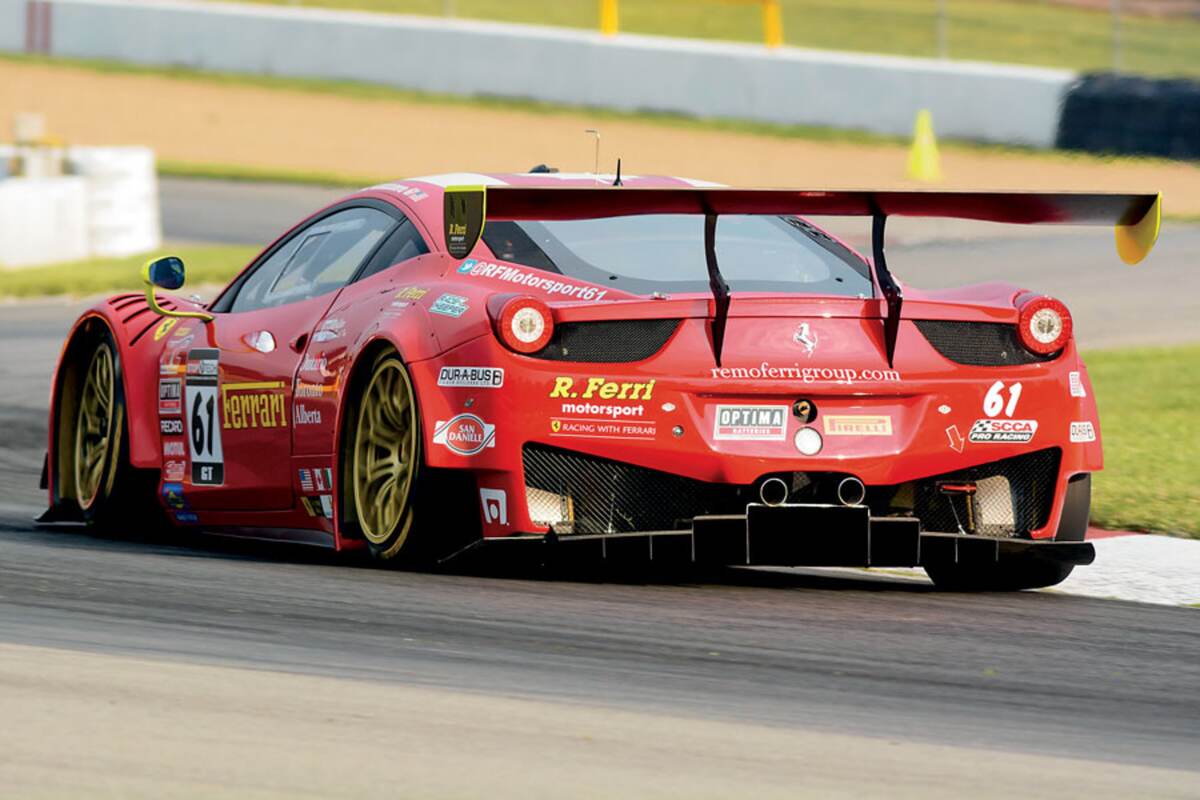 Ever wondered what supercar heaven looks like? To find out, you need look no further than a Pirelli World Challenge race weekend. There you’ll find cars like the McLaren 12C GT3, Audi R8 LMS Ultra, Lamborghini Gallardo FL1, Aston Martin Vantage GT3 and Porsche 911 GT3R racing hard and thrilling fans. Ferrari also has a significant presence in the series with the 458 Italia GT3, one of the most successful GT3-spec race cars competing worldwide over the last few years.

While Pirelli World Challenge (PWC) isn’t exactly a household name, the series celebrates its 25th season in 2014. Sanctioned by the Sports Car Club of America, the PWC has always catered to race cars based on high-performance sports and touring cars. In addition to the top GT class where the Ferraris and Lamborghinis compete, there’s a GTS category for cars like the Chevy Camaro and Ford Mustang that runs alongside the GT-class machinery. There are then separate races for two Touring classes, which cover cars like the Honda Civic Si, Mazda MX-5 and Mini Cooper.

The 2014 season features 12 race weekends (seven of which are shared with IndyCar) run on a mix of road courses and street circuits, ranging from Road America to Long Beach. GT/GTS races last 50 minutes and Touring races go 40, which gives PWC events a different flavor than the longer races found in the competing Tudor United SportsCar Championship (which, among other things, require pit stops and driver changes). But there are similarities, too, most notably the fierce competition that sees the top GT cars setting lap times within a fraction of a second of each other.

MARANELLO’S CHARGE IN THE PWC is led by R. Ferri Motorsport. (It and fellow Ferrari team DragonSpeed have entered every race this season, while Tudor regulars Scuderia Corsa contested one round.) Based in Ontario, Canada, Remo Ferri and his crew are new to PWC this year, but they’re certainly not new to Ferrari; Ferri has been involved with the marque for decades.

“Every boy in Italy wants to work for Ferrari and my dream came true,” recalls Ferri. “I worked as a technician apprentice in Italy and worked my way up, eventually coming to North America to work for a Ferrari dealership in Canada in the early 1970s.” 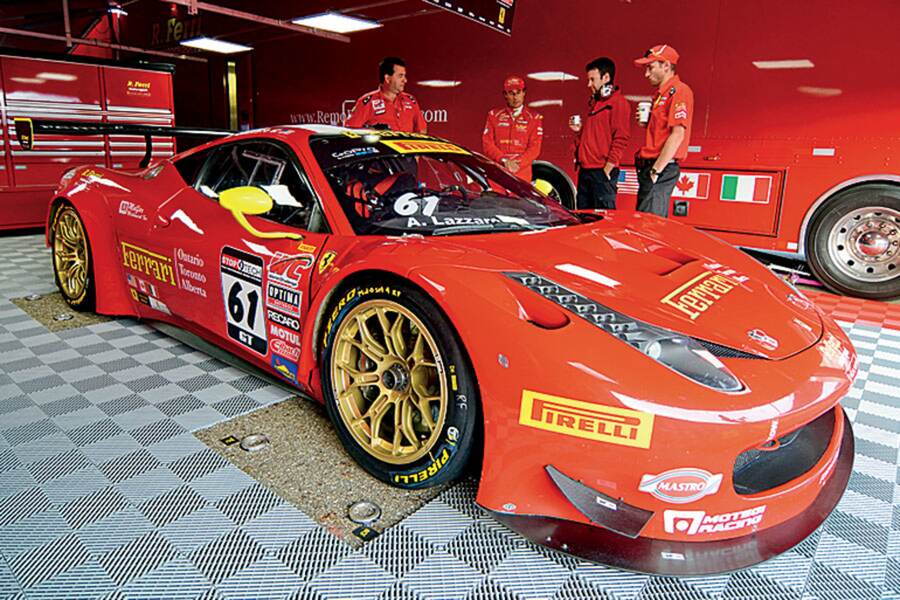 In 1976, Ferri started his own establishment, Maranello Motors, which today is Ferrari of Ontario. He also owns Ferrari of Alberta and Ferrari of Toronto, and has been involved with racing Ferraris since the beginning.

“Racing has always been a part of my life,” says Ferri. “My passion really was to become a driver, but I never had a chance to do it. I think you need to be involved with racing if you want to be with Ferrari, because racing is in Ferrari’s DNA.”

Ferri, whose personal collection includes a 333 SP and an ex-Nigel Mansell F1-89, was one of the first dealers to get involved in the Ferrari Challenge when the series began in North America in 1994, and currently fields a fleet of six 458 Challenges. The team has also been competing in professional racing for many years, typically partnering with other teams, but this year decided to contest the PWC entirely on its own.

“We ran with AIM Autosport last year [in Grand-Am] and the year before ran with Risi [in the American Le Mans Series], but I think we need to have our own destiny,” says Ferri. “We should have gotten better results [last year] and we didn’t, and that made me think that you can’t have two cars under the same team with different interests.”

When deciding where to race in 2014, Ferri considered the Tudor championship but decided on the PWC for several reasons. One is prestige, since GT is the top class in PWC, whereas Tudor’s GTD class, in which Ferri competed last year with AIM, sits at the bottom. 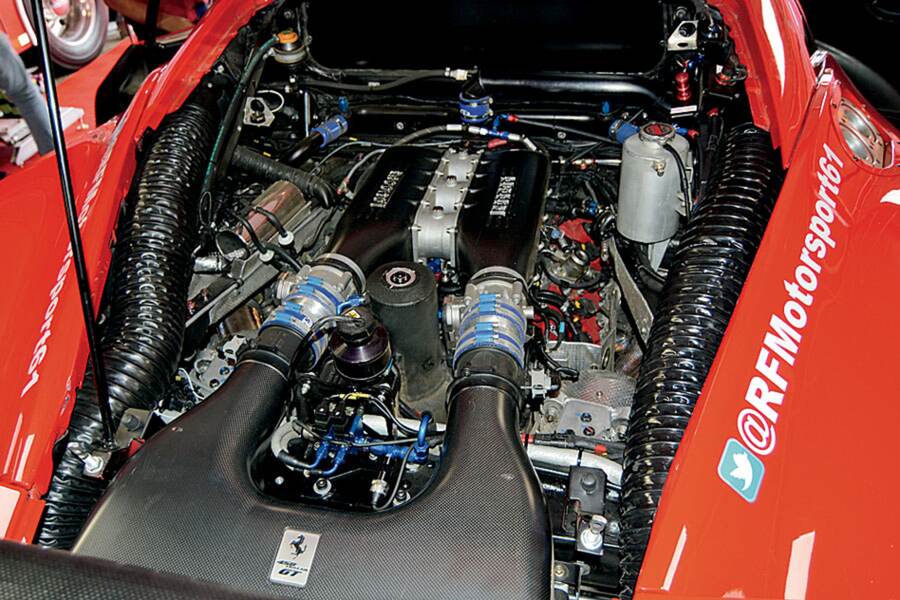 Another reason is cost. “Running two cars in PWC is less than running one car in the Tudor series,” says Ferri. “Longer races are more expensive, and it’s difficult to find sponsors that have the money to afford those races.”

“In the Tudor series, they basically take a 458 GT3 and detune it,” says driver Anthony Lazzaro, who has a long history of racing Ferraris in North America. “They took off a lot of the aero, the ABS and the traction control. In PWC we’re allowed to run in GT3 spec, with only some very slight changes. For instance, we’re allowed to use different springs and shocks. The 458 is homologated in GT3 with a two-way shock, but since we don’t run on super-smooth tracks everywhere we use Dynamic four-way adjustable shocks.”

The differences, Lazzaro continues, are easy to feel on track. “The overall grip level in the GT3 car is much higher than in the GTD car, and the GT3 car is much faster. We unloaded the car from [builder] Michelotto at Road Atlanta and I went straight out and set a lap in the high 1:19 range. I think the GTLM pole from the Petit Le Mans the year before was in the high 18s [it was a 1:18.7], so that’s pretty good, right away it was only a second off the GTLM pole. The Pirellis we race with in PWC are a good race tire, too. They’re one of their harder compounds so they’re durable, but they also have a higher level of grip.

“We have a happy medium with the Ferrari, as it has a good balance of top speed versus cornering speed versus downforce,” Lazzaro adds. “And it’s one of the most fun GT cars I’ve ever driven.” 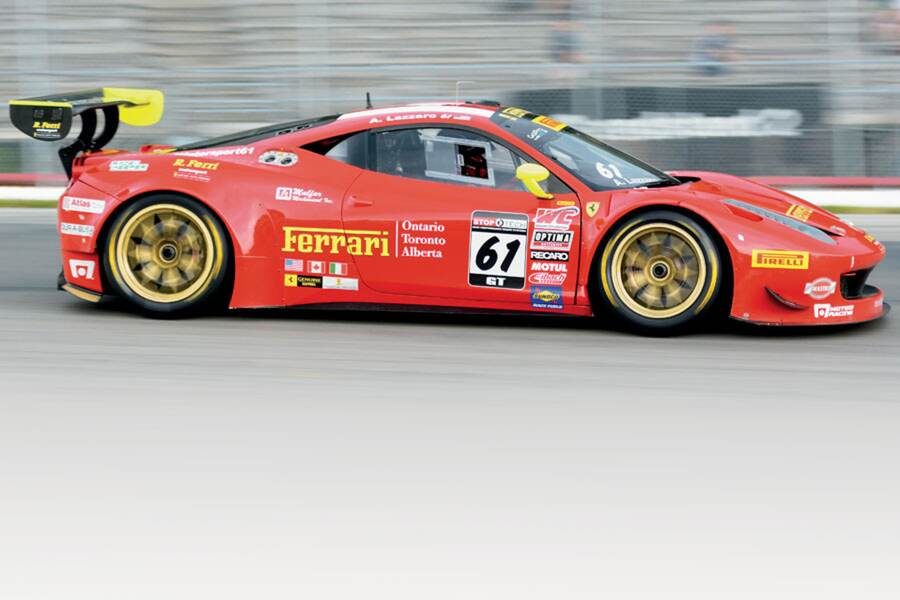 IN ITS INAUGURAL PWC SEASON, R. Ferri Motorsports has enjoyed some strong results against tough competition. After 12 of 16 races (PWC usually features two races per weekend, and the GT/GTS and Touring classes don’t both run at every event), Lazzaro has scored seven podium finishes in the 20- to 25-car GT class, including wins at Barber Motorsports Park and Sonoma, and is third in driver points. Earlier in the season, the team also entered a second Ferrari in the GT-A class (which uses the same cars as GT but is for amateur drivers) for Nick Mancuso, who earned three top-five finishes in the GT ranks. Ferrari currently sits third in the series’ manufacturer standings.

These promising results don’t fully reflect the challenges the team has faced this year. “We as a team are new to the series,” says Lazzaro. “Engineering-wise we’re new to the series and we’ve done no testing per se, so we’re on a roller coaster.”

Another difficulty the team has faced is that the 458 GT3, unlike the road-going version as well as some of its PWC rivals, lacks launch control. “The Ferrari doesn’t perform all that well on standing starts,” Lazzaro says, “and we have nothing in the way of launch control, which is a deficit. It’s going to be something you’ll need to be competitive in this series.”

If there’s one constant in professional racing, it’s change. PWC may soon be facing more competition from the Tudor series, which has announced it will allow GT3-spec cars into the GTD class starting in 2016. For its part, PWC may add endurance races to its schedule, which Ferri thinks would be a mistake.

“I left the Tudor series because it’s too expensive, and endurance races require a different level of money and support,” he says. “I don’t think we need that. This series was built on private teams and I want to bring my Ferrari Challenge guys into PWC. A good Ferrari Challenge team could run this car in PWC because you don’t need the pit stops.”

Whatever new rules come, Ferri hopes to expand on his experiences this year and mount a stronger challenge for the championship in 2015. “We’re still learning, and my goal is that whatever we do today, we have to learn and do better tomorrow,” he says. “This is our first year and already we’ve been on the podium a lot.”

“PWC has a good recipe to make something fantastic,” concludes Lazzaro. “Many of us grew up when SCCA Trans-Am racing was one of the pinnacles of motorsport. They had a certain format and it was the same type of cars: GT cars doing sprint races. That series was a premier category at its peak, and PWC totally has the ability to do that. The field of cars in PWC right now is one of the coolest fields of cars ever, and the fans can identify with these supercars.” 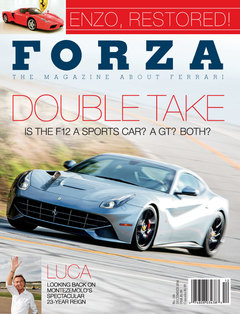