Since Phil and Martha Bachman bought their first Ferrari in the early 1980s, they’ve travelled the world with their FXX, become longtime concours judges and built an unrivaled collection of (mostly) modern Ferraris. 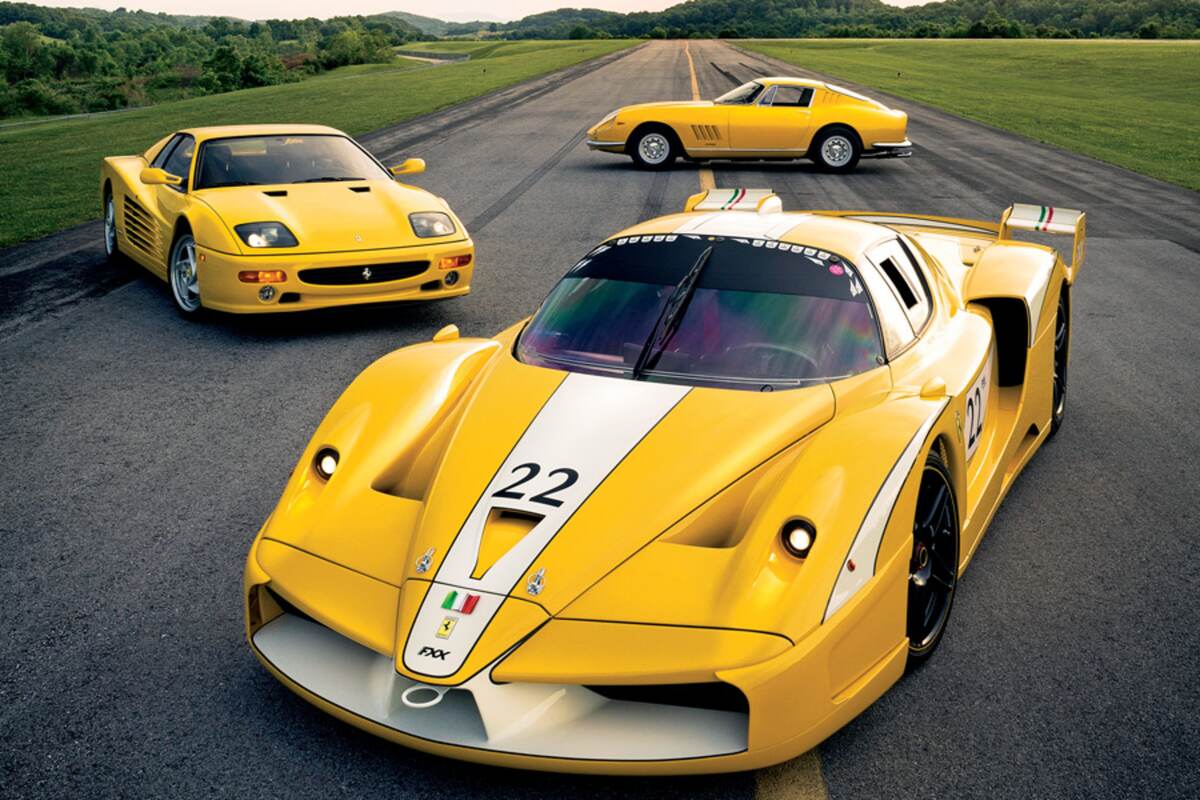 Story and photos by Clint Davis

Greeneville, Tennessee, a small city of around 15,000 located in the foothills of the Appalachian Mountains, is probably best known as the longtime home of Andrew Johnson, the 17th president of the United States (as well as the first president to be impeached). Of more significance to this story, Greeneville is also home to Phil Bachman, who, over the course of the last 30 years, has assembled a fascinating collection of Ferraris.

Ferraris are about as common as unicorns in this part of the South, and Bachman, who opened his first auto dealership in 1967, initially collected his fair share of pristine Corvettes, Pontiacs and little British cars. He discovered our favorite marque in 1983, and things took off from there. How far Bachman has come since his first encounter with the Prancing Horse is immediately evident when he and wife (and fellow Ferrari enthusiast) Martha welcome me to their unassuming garage.

Unassuming on the outside, that is: Upon entering, I’m nearly blinded by a sea of bright yellow thoroughbreds. This near-ubiquitous color is far from the whole story, however. When I dig a little deeper, I learn that most of the cars are the last example of their kind built.

“I think the final production car is the one that best exemplifies the series,” Bachman explains. “It also seems like a nice trend for the collection. For instance, I purchased the last 512 BBi produced—which is red, by the way—when it became available.” 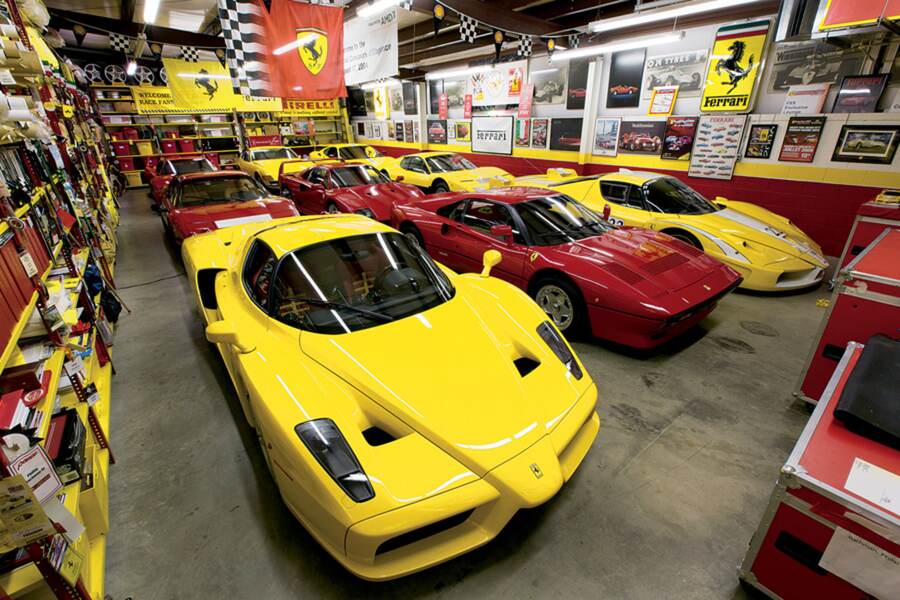 Tour completed, the Bachmans invite me into their home for a cool drink; genuine Southern hospitality from some of the friendliest car collectors I’ve ever met. Sweet tea in hand, we soon sit down for a long talk about Ferrari.

So how many Ferraris do you own in total?

I’m asked this question from time to time. I typically don’t reveal the exact number, but what I can say is that I’ve collected Ferraris since 1984 and I’ve been able to average acquiring one car per year. I should emphasize that most of my cars aren’t extremely valuable like many of the historic Ferraris. Rather, my collection embodies mostly contemporary Ferraris with a few older ones sprinkled in.

What are some of your favorite cars in the collection? 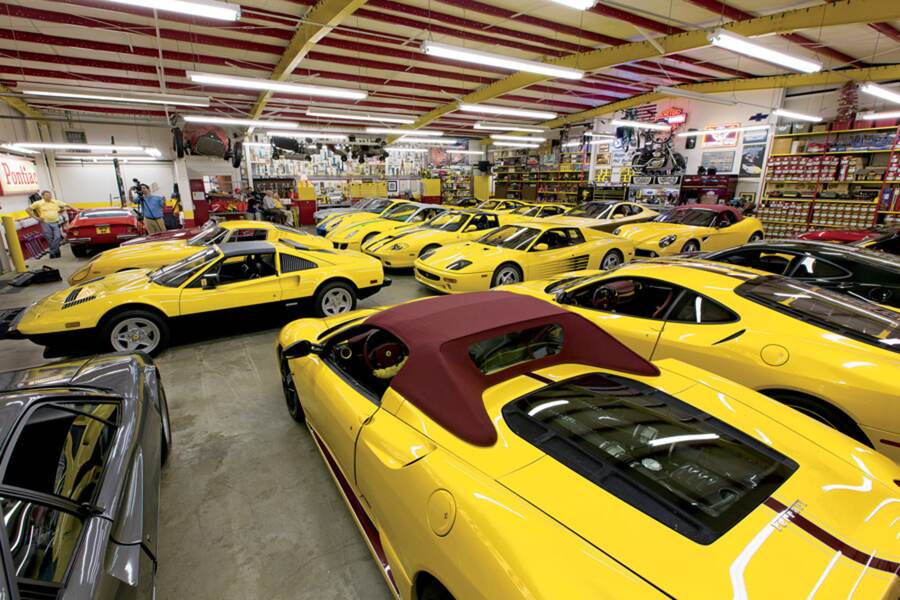 My favorite cars include the 1967 275 GTB/4, the 1975 365 GT4 BB and the 2003 Enzo. I feel that the 275 GTB/4 is particularly special because it’s one of the alloy-bodied cars. Martha and I adore the 365 GT4 BB since we fully restored it ourselves in 1988 and won Best of Show with it at the 1989 Ferrari Club of America Annual Meet. The Enzo is my favorite modern Ferrari because I got to see it being built on the assembly line.

But, of course, the car I’m most reminiscent of is my first Ferrari, the 1984 308 GTS Quattrovalvole. I remember visiting Washington, D.C. for an auto-dealers trade show in 1983 and seeing a Quattrovalvole there. The car struck a chord with me, so I ordered one in 1984 through the Ferrari dealer in Nashville. I wanted a yellow one because I thought there were too many red ones; I wanted to be different. I “tricked” it as much as I could at that time by ordering the black “Boxer bottom” and the Euro front spoiler.

Do you have any special stories about that first Ferrari?

The story that the Quattrovalvole is most known for among my family took place in 1985. Martha was pregnant with our son, P.B. When the morning she delivered arrived, we hopped in the Ferrari and I rushed her 35 miles to the hospital. I was just hoping she could wait until we got to the hospital, but it gave me an excuse to drive fast! 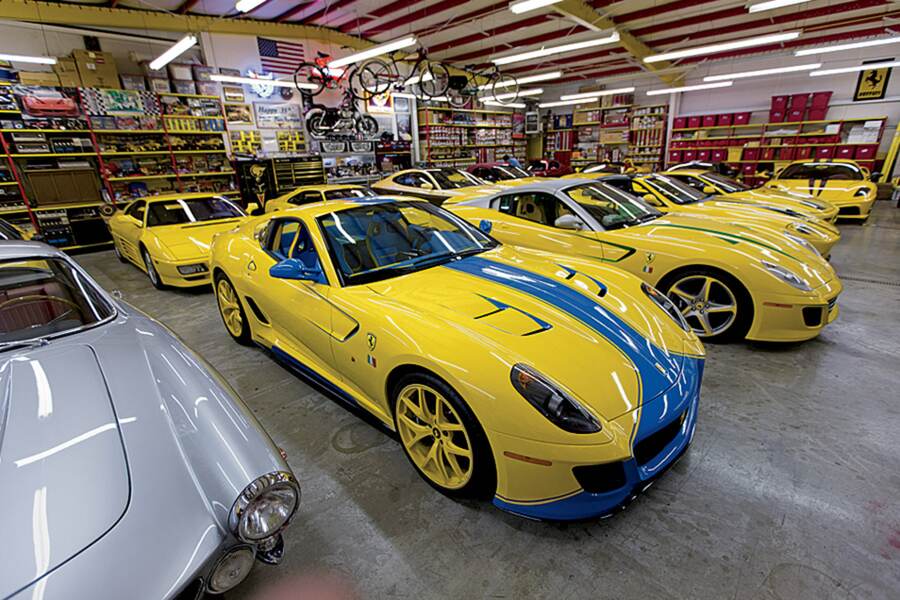 I’m sure you’ve been asked a million times, but…why yellow?

Yellow is my favorite color. As it relates to Ferraris, I saw two 308s parked next to each other one time in 1983. One was red and one was yellow, and I thought to myself, “I like the yellow one better.” It stood out more. Since then, yellow remains my color of choice.

There are a few non-yellow Ferraris in your stable. What’s the significance of them?

The 288 GTO and F40 were only available in red, but I like those cars because they are the first two supercars. Another non-yellow car in the collection is the silver 250 GT Lusso, which I bought from the previous owner and kept the color as it was. 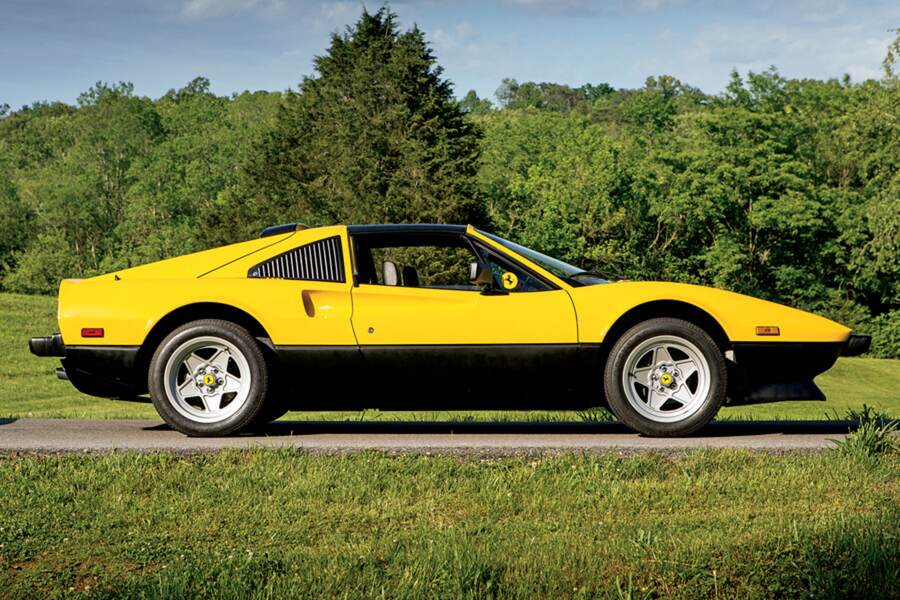 Judging by the custom exterior color accents and interior trims, most of your cars are not ordinary dealer-option models.

I started ordering distinctive cars as early as my first Ferrari. I have always given thought to color and option choices that would make the cars different; I like my cars to stand out from the rest. I choose bold, bright colors and interior trims. I look at how to customize the exterior trim in interesting ways, and I have the interior follow suit. That’s another reason for owning the last car in a given series; it gives me time to gather my thoughts about how I want to “spec it out” for it to be special.

The factory became keener to meet special requests over the years. I’d say it began in earnest with my 1999 355 Spider Serie Fiorano. I learned around that time that the colors of Modena are yellow and blue, so I ordered a blue interior and top with a yellow exterior. A few later examples are the red headlights and rear grille on the Challenge Stradale, the custom stripes on the 575 Superamerica and the tri-stage yellow paint on the 430 Scuderia and Scuderia Spider 16M.

In the early days of my collecting, ordering a unique car was limited to items such as those on the Quattrovalvole: a body-colored spoiler or a full leather dashboard and headliner. Nowadays, the choices are limitless through the Tailor Made department. 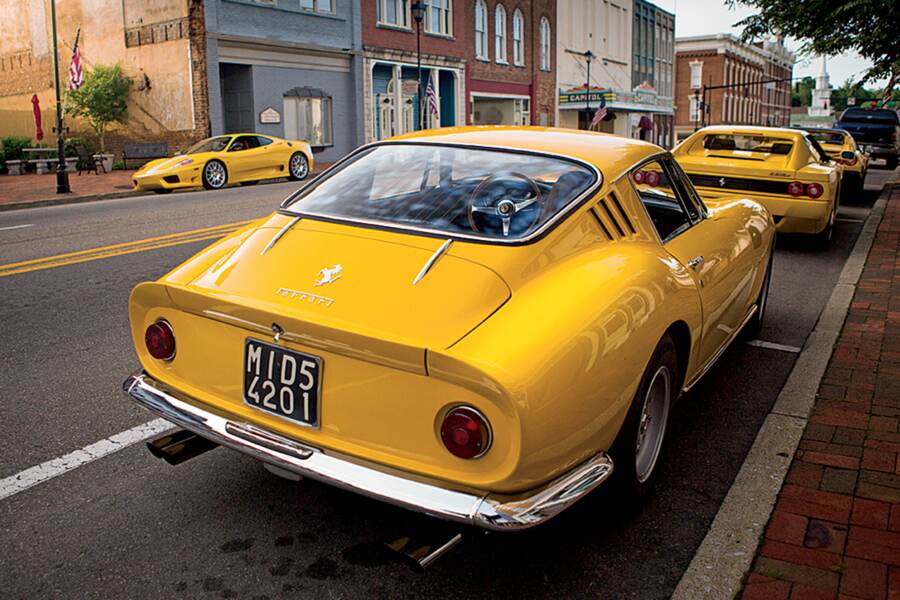 You obviously have a good relationship with the people in Maranello. After what number Ferrari did you start gaining attention inside the factory?

Are there any people in particular at Ferrari who have helped you through the years?

Yes, I’m so grateful to so many people at Ferrari on both sides of the Atlantic. I’d like to recognize Luca di Montezemolo and Amedeo Felisa for their recognition and support of my collection. I’d also like to mention my dear friend at the factory Maurizio Macalesi, and I appreciate so many other people at the factory who have befriended me, more than I can name here. These include people at Ferrari Classiche, Corse Clienti for the FXX Programme and the Tailor Made department. And, at Ferrari North America, Mario Bommarito, Enzo Francesconi and former presidents Maurizio Parlato and Marco Mattiacci. I could write a whole article about the people at Ferrari who have helped me. 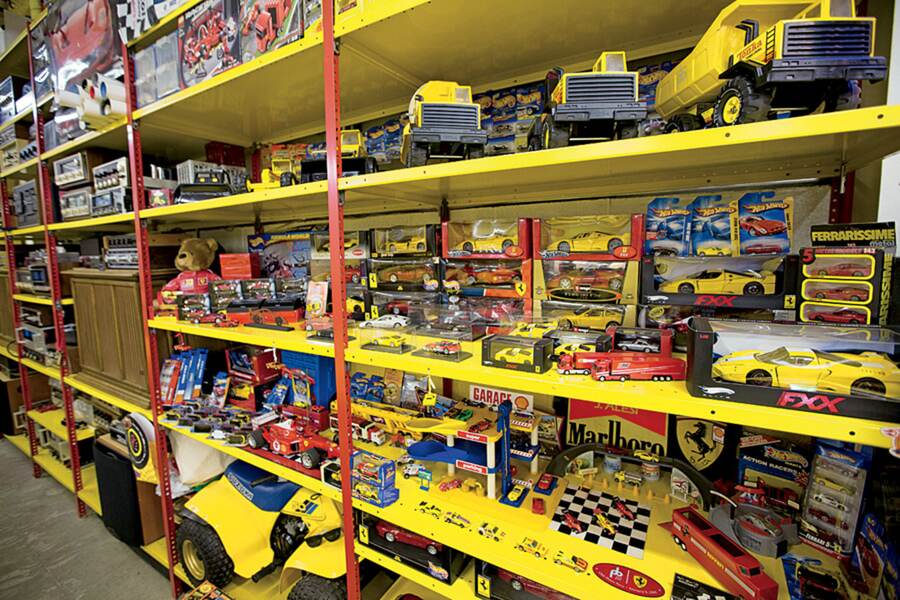 Those connections led to your FXX, correct?

Yes. The FXX was offered to elite Ferrari collectors in 2005, and I’m grateful to have been included. The FXX Programme, a series of factory-organized track events, was incredible to me because it allowed me to travel around the world with the car and drive on some of the most famous F1 tracks. I drove on Monza, Spa-Francorchamps, Suzuka and others. I participated in the FXX Programme actively from 2006 until 2011, and put 2,500-3,500 miles on the car.

My FXX is the only yellow FXX built new. The car features a combination of the original livery and the updated Evoluzione livery of 2008.

Your garage has shelves of event plaques, personal pictures and hundreds of Ferrari souvenirs. How do you and your family enjoy the collection of cars? 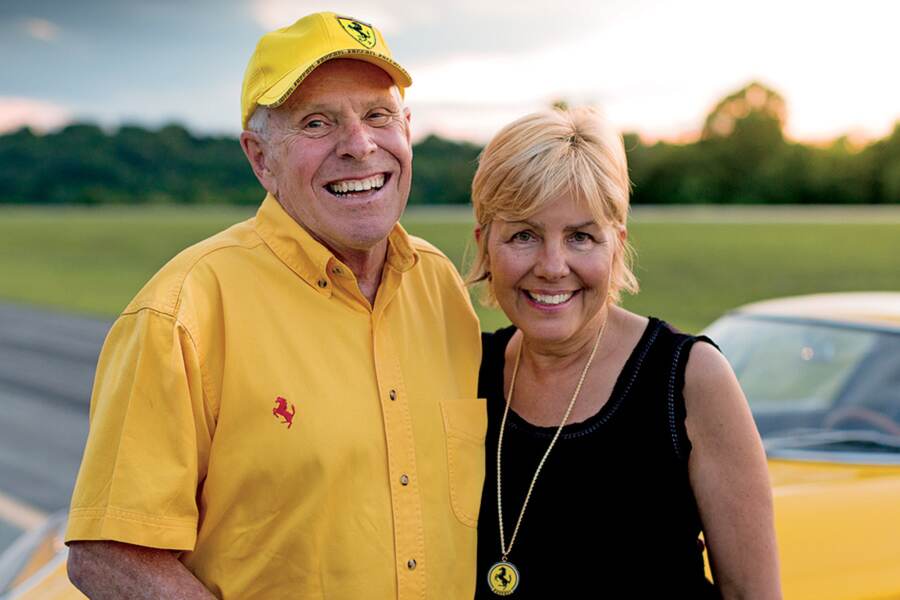 I enjoy my cars most through my involvement in the Ferrari Club of America. I enjoy showing my cars at concours and maintaining them as fine examples. My wife, son and I are judges for the FCA and Cavallino shows. I have attended all of the FCA annual meets since 1986, and have been involved in judging since 1990. I reached my 25th year of judging in the club this year, receiving the Distinguished Judge title. Simply put, I have enjoyed the people in the FCA beyond belief.

Yes, I consider the preservation of my cars as central to the collection. The cars that have been to shows have already been recognized as well-preserved or meticulously restored examples. We preserve my cars by starting them up from time to time and driving them around the block or to my home and back, which is about nine miles.

Where would you like to see your collection 50 years in the future?

I’d like the collection to stay intact, and I’d like to see the cars remain in great condition. In the meantime, I hope to keep adding to the collection. Each time a new model is introduced, I think of Enzo’s response to the question, “Which Ferrari is your favorite built?” His answer was “The next one!”

Isn’t it difficult to wait a few years before you’re able to own one?

Yes, it’s hard! I want the cars when I see them introduced, but I hold myself back on account of the last model being significant to the collection.

So what will “the next car” be for you?

[Grinning modestly] I have a LaFerrari on its way here in a few short years—in yellow, of course! 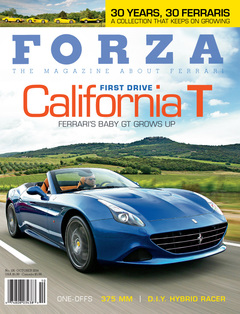 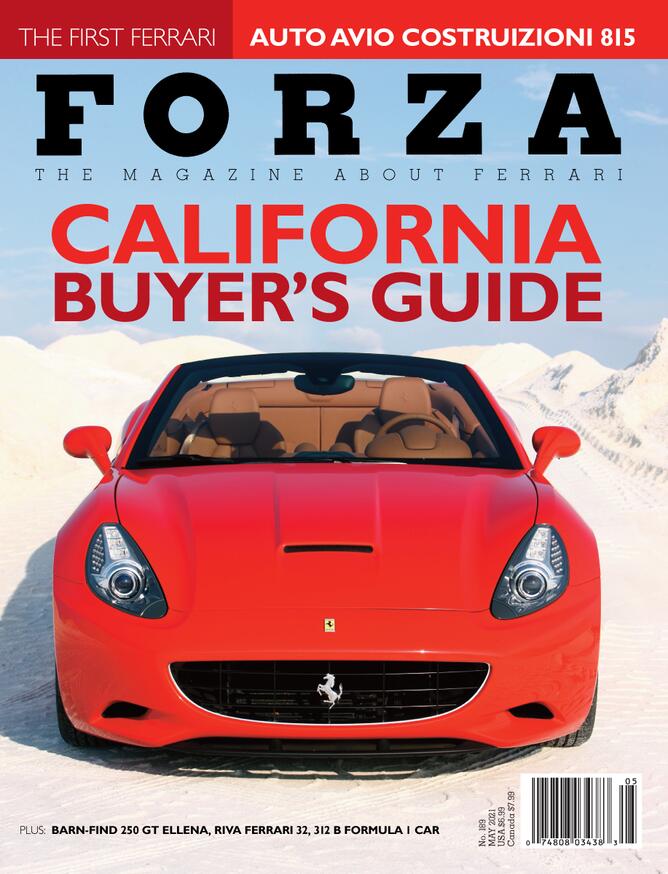