With the 963-hp hybrid LaFerrari, Ferrari has rewritten the rules of speed and technology. 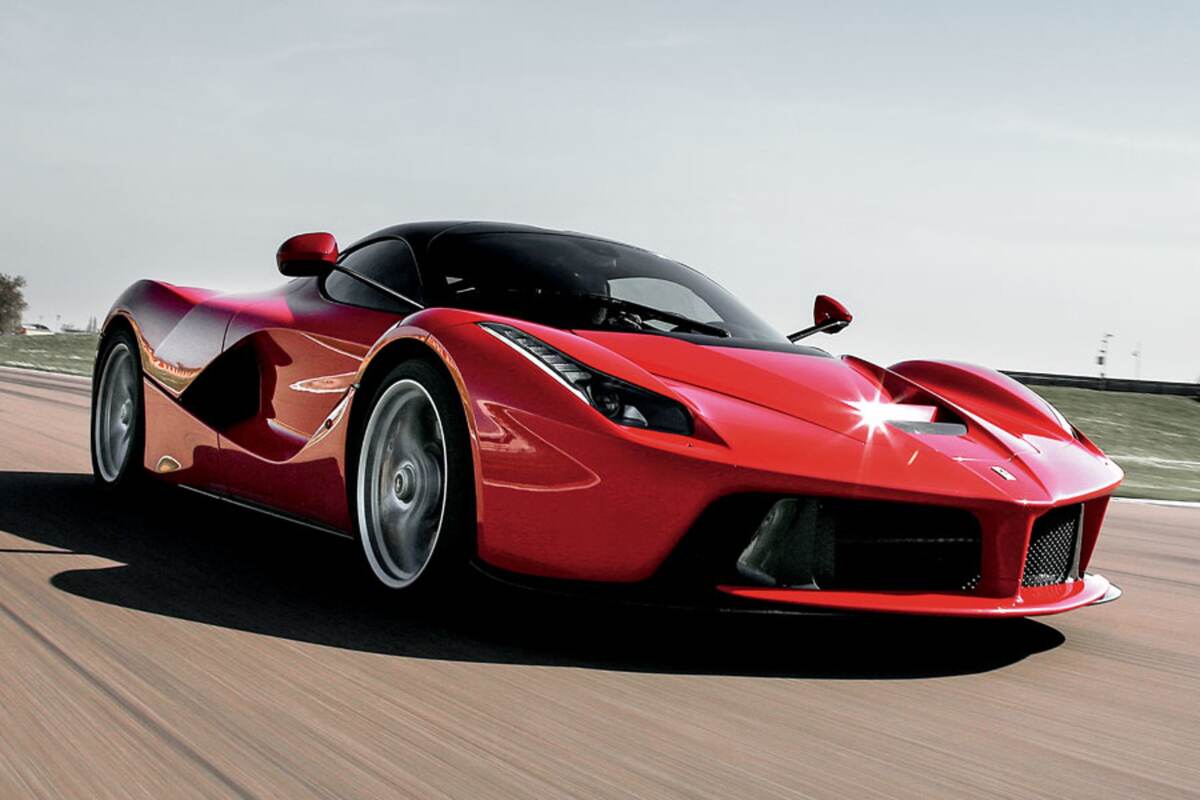 Any Ferrari is special, and driving one, whatever its vintage, is an experience to savor. That said, some Ferraris are unquestionably more special than others—particularly this one. Even in the company of Maranello’s earlier supercars, the legendary 288 GTO, F40, F50 and Enzo, the LaFerrari (production will be limited to 499 units, and all are already sold) represents a new high-water mark in Maranello’s road-car history.

To discover the origins of what was known as the F150 project, before Ferrari president Luca di Montezemolo bestowed on it the awkward name (which translates from Italian as “TheFerrari”) that even Maranello insiders dislike, cast your mind back to 2007. That’s when Ferrari unveiled a strange, non-running concept that looked like a 7/8-scale Enzo. Though we didn’t know it at the time, the Mille Chili (for its 1,000-kilogram weight) hybrid concept was a sneak preview at the makeup of Ferrari’s fifth supercar—or, perhaps, its first hypercar.

More clues arrived in March 2010, when the 599-based HY-KERS was shown at the Geneva Auto Show [“Ferrari’s HY-HORSE,” FORZA #102]. Later that year, Ferrari’s test team began experimenting with a trio of 599 mules, then switched to the first real LaFerrari prototypes the following summer. 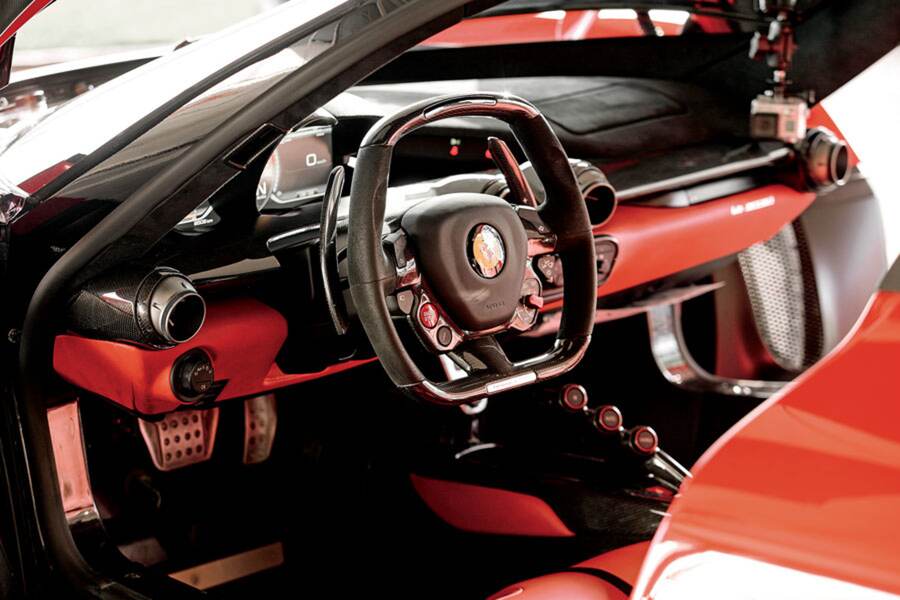 Ferrari’s goal was to produce a supercar that was faster and more fuel-efficient than its Enzo predecessor, as well as no bigger and no heavier. In addition, it had to be easy to climb into and have enough space for two people wearing racing helmets. Finally, it had to have a V12; that was never in doubt.

If this list sounds like the recipe for a mildly updated Enzo, the reality is much more exciting. With the LaFerrari, Maranello has incorporated everything it has learned in the last decade about active aerodynamics, hybrid technology, carbon-fiber construction and the crucial software that marries the gearbox, traction control and electronic differential.

THERE’S NO HINT of these technological advances visible on the LaFerrari that awaits me, its ocean-deep red paint glimmering in the spring sunshine, at Ferrari’s Fiorano test track. A switch hidden from view, but easily felt on the underside of the door scallop, unlatches the door. This then swings out and upwards via a hinge at the base of the A-pillar, revealing the carbon-fiber chassis in all its glory. Ferrari is adamant that lightweight, easily repairable aluminum remains the right choice of materials for its series-production cars (for now, at least), but the LaFerrari is made of carbon fiber—and not the everyday Resin Transfer Molding (RTM) composites used by other manufacturers, but the costly, time-consuming Formula 1-style material. 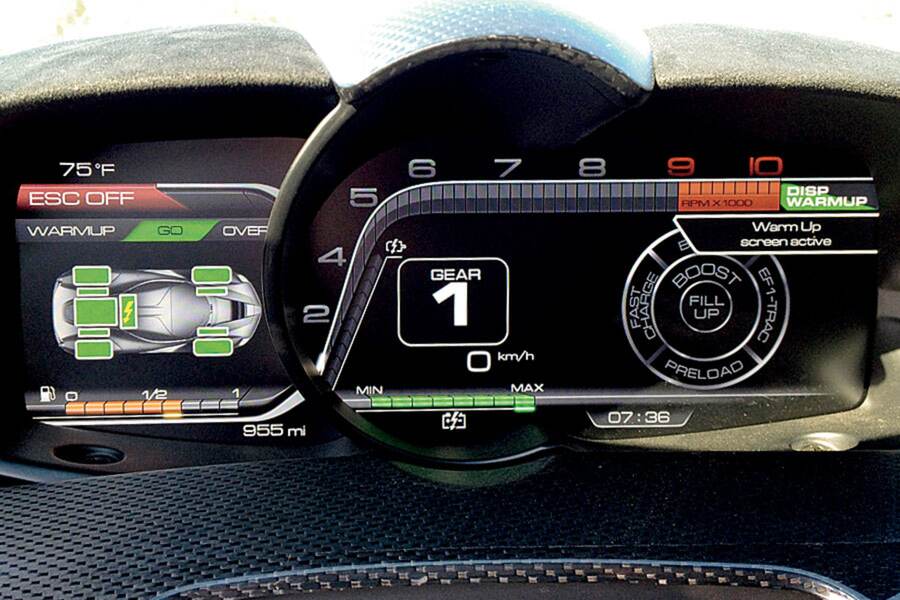 Rather than being a simple tub as used on the F50, Ferrari’s first all-composite car, the LaFerrari’s core was designed as a complete cell, including the roof structure. It is 20-percent lighter and around 25-percent stiffer than the Enzo’s cell, which allowed the engineers to create a surprisingly low and narrow rocker panel structure that makes dropping into the driver’s seat a cinch. On the other hand, the LaFerrari is noticeably smaller inside, bordering on cramped, due to the aerodynamicists’ desire to reduce the car’s frontal area in order to improve airflow management and decrease drag.

Much of the dashboard is instantly familiar to anyone who’s sat in an Enzo, but the way you get situated in front of it is fundamentally different. Ferrari worked out that it could reduce the car’s height compared with the Enzo by 30mm (about 1.2 inches) by fixing the seats, which will be fitted to suit the original buyer, directly to the floor. Pulling a lever close to the center tunnel unlocks the spring-loaded pedal box, which moves towards me; I push it away with both feet until it’s in the proper position, then release the lever to re-lock it in place. The steering column also adjusts manually.

The partially Alcantara-trimmed carbon-fiber steering wheel is squarer than in other current Ferraris, but contains the now-expected controls for lights and wipers, the manettino and the “bumpy road” button to soften the suspension, which suggests this might just be a useable road car. For now, though, I’ve got Fiorano all to myself. 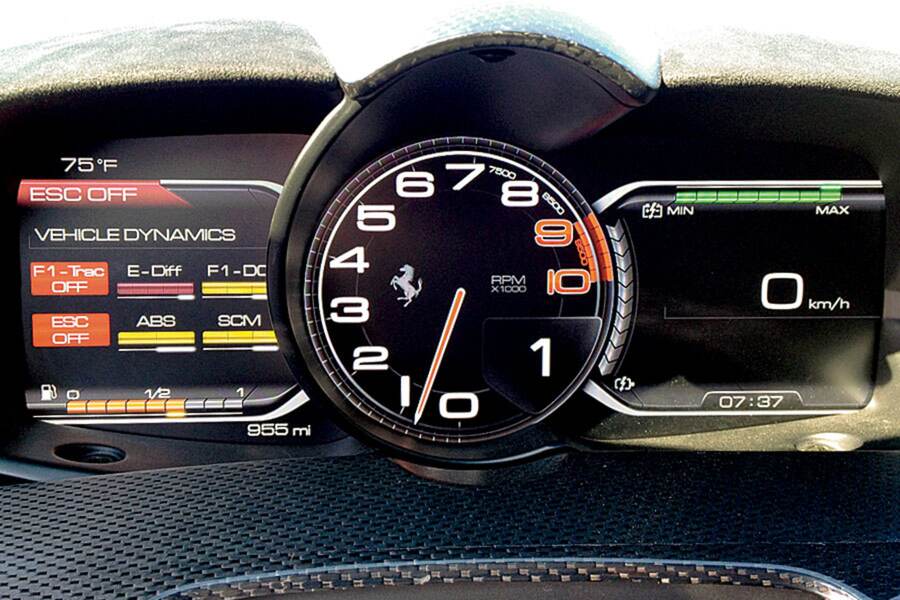 Thumbing the big red starter button in the wheel’s lower left quadrant fires the monstrous engine mounted a few feet behind my back. The LaFerrari’s 6.3-liter all-aluminum V12 is based on the F12’s, which makes a world-class 740 hp and 509 lb-ft of torque. For this application, the engine has been squeezed a bit to pump out an additional 60 hp and 7 lb-ft, delivered through the usual seven-speed dual-clutch transmission and active differential to the rear wheels. Given that the Enzo packed “just” 660 hp, this new iteration of the V12 alone would make for spectacular performance. But in the LaFerrari, the gas engine is augmented by a 163-hp electric motor, for a staggering peak total output of 963 hp, along with 715 lb-ft of torque—by far the most ever in a road-going Ferrari.

Despite its hybrid powertrain, the LaFerrari does not offer an electric-only mode, unlike its McLaren P1 and Porsche 918 Spider rivals. Instead, the electric motor and gasoline engine constantly work together.

Rather than being a digital-analog hybrid as on the 458, FF and F12, the LaFerrari’s instrument-panel display is a full TFT unit. The VDA display, which shows the status of the car’s various systems, remains on the left-hand side, but now you can configure the main area to your taste, choosing between a traditional, circular “analog” tachometer or a deliciously 1980s-style engine-speed graph. 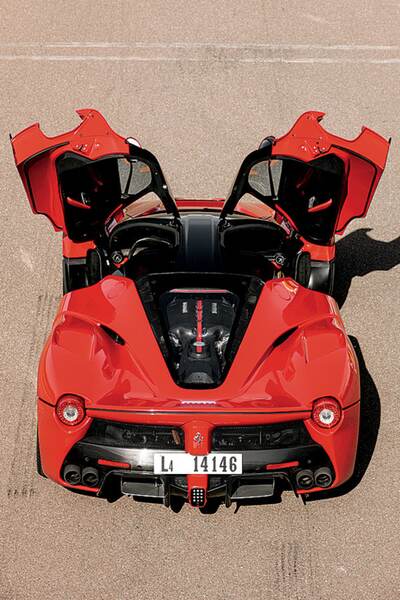 Whichever look is selected, redline hovers at the same, faintly absurd 9,250 rpm. That beats even the 458 (9,000 rpm), as does the V12’s sound track. Instead of the hard-edged tone of its baby brother’s V8, the LaFerrari sounds so much sweeter and more soulful.

It’s faster, too. Even at part throttle, the LaFerrari’s performance is breathtaking. The sensation is one of a complete lack of inertia, both from the free-spinning engine and the car itself. At 3,131 pounds (roughly 120 pounds more than the Enzo, but a whopping 700-or-so pounds less than the Porsche 918), the LaFerrari is

a couple of hundred pounds lighter than a 458 Italia and has 70 percent more poke. The first time I pin the throttle to the bare carbon-fiber bulkhead and experience all 963 ponies galloping their way to the pavement is like taking a sucker punch to the guts. The acceleration is crushing—literally, in the case of my internal organs—and so pronounced it verges on the uncomfortable. 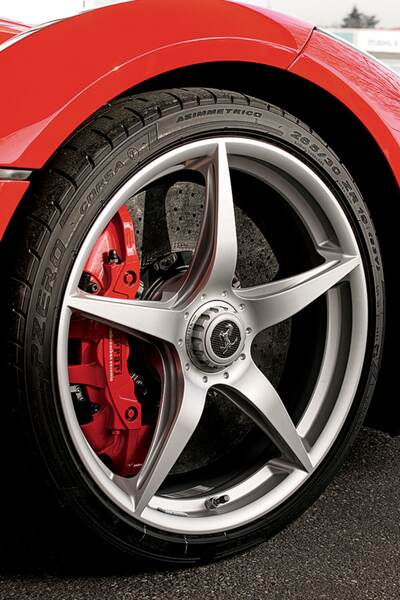 There’s power everywhere, the instant torque of the electric motor allowing Ferrari to tune the V12 for top-end performance without creating a peaky powerplant. Throttle response defies belief, thanks to the electric motor filling in any miniscule gaps in the power curve that might otherwise exist.

Ferrari doesn’t specify a 0-62 mph time, only saying that it dips below 3 seconds. This in no way adequately describes how much faster the LaFerrari feels than even something as phenomenally accelerative as a 458 or F12. Looking further up the speedometer for comparisons, an F12 will reach 124 mph (200 km/h) in 8.5 seconds; the LaFerrari will get there in less than seven, and arrive at 186 mph (300 km/h) in just 15.

WITH SUCH MASSIVE PERFORMANCE overwhelming my senses, it would easy to overlook the other elements of the LaFerrari package—if they were not equally worthy of praise. Take the steering, which is by far the best modern Ferrari system yet. As in the other current cars, the assist is electro-hydraulic, rather than fully electric, and the rack is eye-poppingly high geared. I’ve become familiar with the fast steering, but the LaFerrari’s wheel offers far better weighting, accuracy and feel. 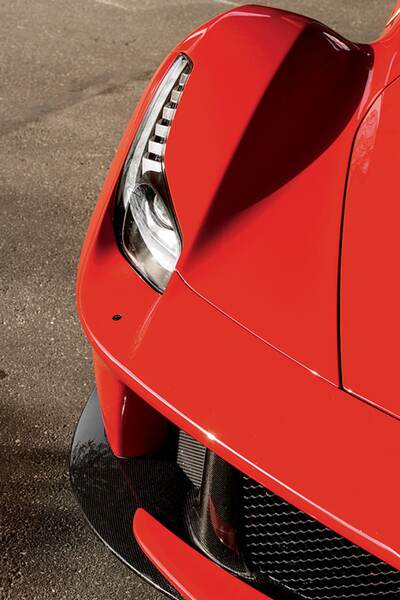 Front-end grip is seriously impressive, with the 265/30-19 Pirelli P Zero Corsa tires biting into the tarmac like hungry piranhas, but the purchase at the rear is simply astounding. Through a combination of super-sticky 345mm-wide rear rubber, the E-Diff and F1-derived traction-control software, this Ferrari manages to channel the best part of 1,000 hp through the back wheels alone and not end up squirming down the road like a dog with worms.

It’s a staggering achievement, and it shows in the car’s Fiorano lap times. The LaFerrari can lap the circuit in 1 minute, 20 seconds, reaching the finish line more than 5 seconds ahead of an Enzo and even 3.5 seconds before a 458 Speciale.

Each lap, I check the battery-level indicator, but it barely moves. Every kilowatt drained when I stomp the right-hand pedal at the start of each straight is recovered when I jump on the left one at the end of it. Furthermore, according to Ferrari’s Matteo Lanzavecchia, the head of vehicle testing and development, the LaFerrari’s hybrid battery will never be depleted in real-world driving. (Ferrari also claims to be the only car maker able to recuperate energy when the ABS system is operating, and says the LaFerrari can recover up to 50 times more energy than a normal hybrid automobile.) The only possible way to lose all charge would be to go to a high-speed venue like Nardo or Bonneville and perform repeated top-speed runs, knocking the transmission into neutral and staying off the brakes at the end of each so as to deny the powertrain any change to regenerate. 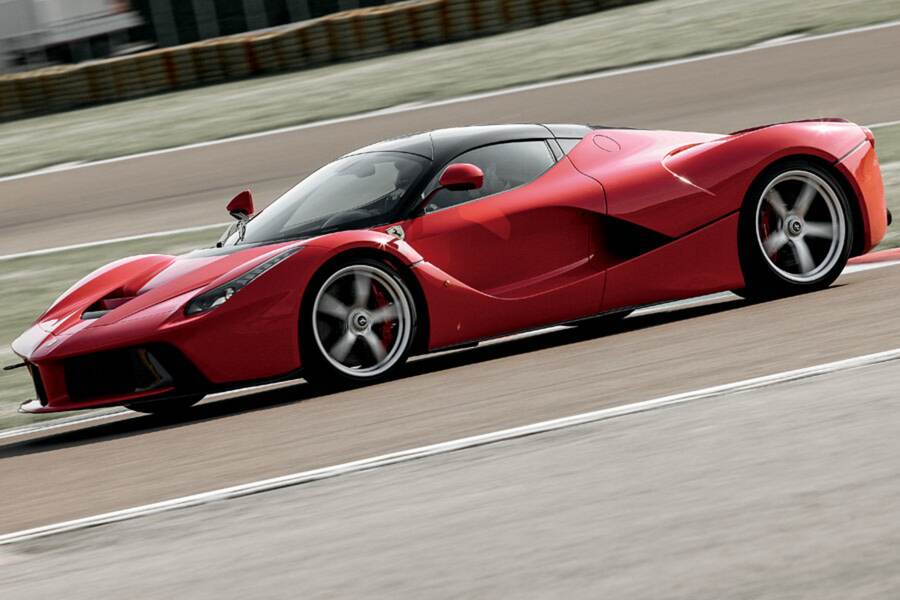 Braking power at track speeds is phenomenal. It has to be: In low-drag mode, the LaFerrari is so much more slippery than an F1 car that it’s almost travelling as fast as one by the end of Fiorano’s pit straight.

With that in mind, just how manageable is this 963-hp Ferrari on the road? Well, it’s certainly not a car for touring continents, as the only cargo area is a modest, briefcase-sized cubby located in the nose. City driving is slightly awkward due to blind spots created by those gorgeous mirrors, and brake feel suffers significantly in light, low-speed applications because of the regenerative braking effect. (Ferrari acknowledges this limitation, saying it was willing to accept some degree of edginess in such an extreme machine.) In every other respect—and I wouldn’t blame you for not believing me—the LaFerrari is as easy to drive as a 458.

I can feel the stiffness of the structure in the way the car disregards potholes, and the ride is incredibly supple even before I reach for the Suspension button on the steering wheel to relax the magnetorheological shock absorbers. I’ve driven a Lamborghini Aventador over the same uneven Emilia Romagna roads, and that supercar is nowhere near as composed. Despite its four-wheel drive, the Lambo isn’t as wieldy as the Ferrari, either. 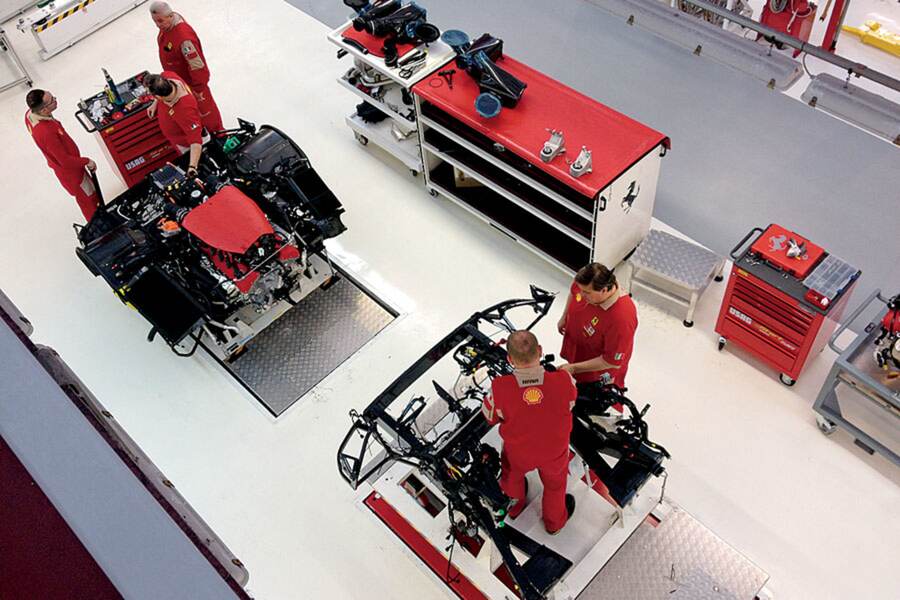 Away from Fiorano’s marble-smooth surface, the LaFerrari’s steering feels even better, and the whole car seemingly shrinks around me as I scythe into the corners. Once again, the way this thing puts down its power is astonishing, and so perfectly balanced that spinning the manettino around to deactivate the stability control is far less scary than it sounds.

That has to be one of the LaFerrari’s crowning achievements: To deliver a near-1,000 hp rear-wheel-drive car that is as friendly to drive as a Porsche Cayman, which musters maybe one-third the power, is some feat. Only one thing impresses me more, and it’s something Lanzavecchia was at pains to point out: While the technology in this car is incredible, it never takes center stage in the driving experience. There are no gimmicks, no boost buttons, no silent EV modes; who wants not to hear a car like this? Every system is there to make the LaFerrari perform better, without the driver necessarily even being aware of it. The driving experience is pure Ferrari, and exactly as it should be. 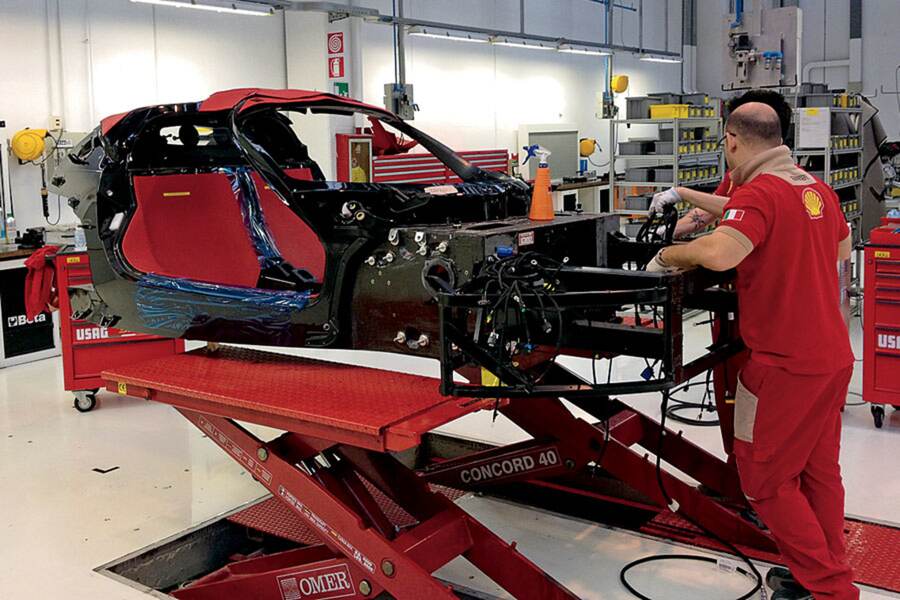 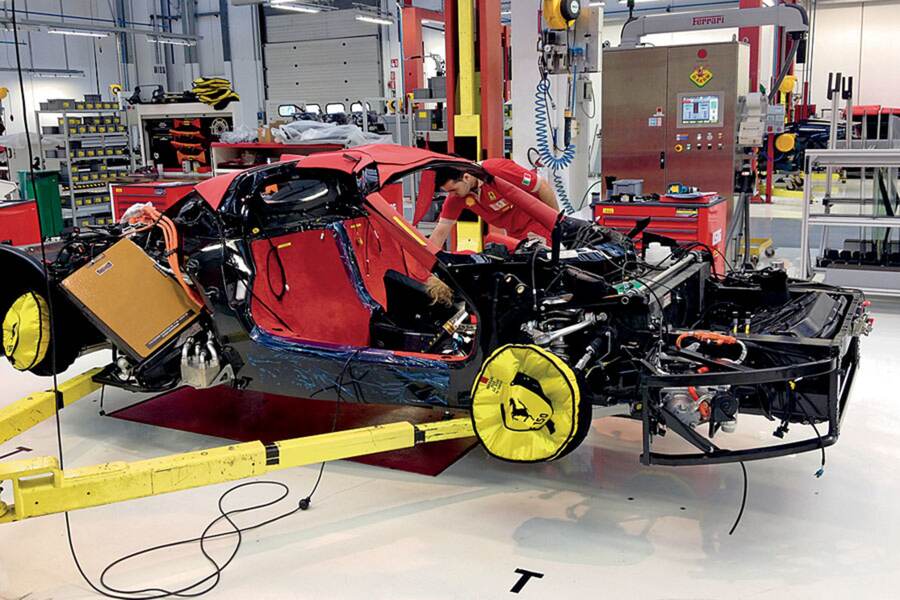 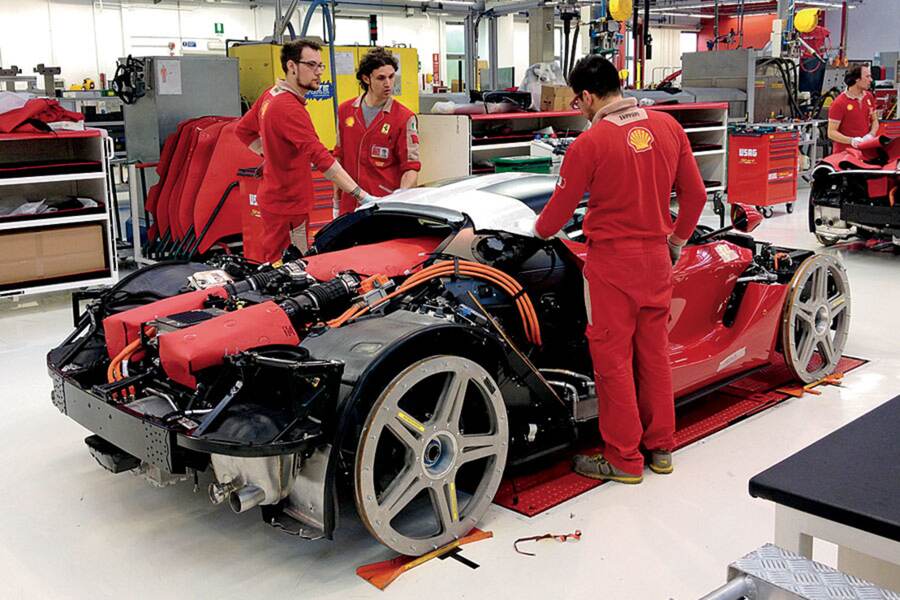 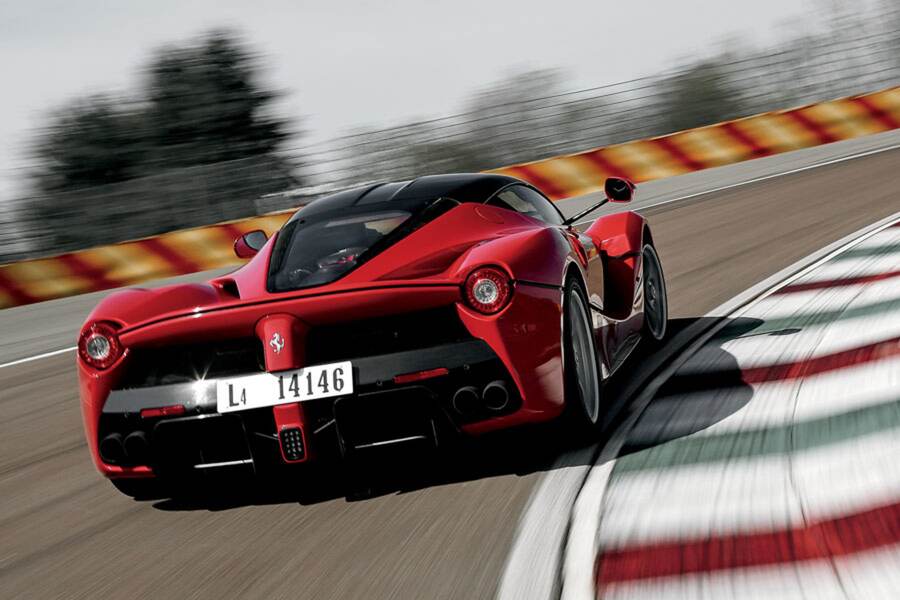 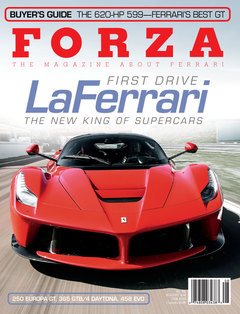