With the Speciale, Ferrari saved the best for what might be the last of the 458 line. 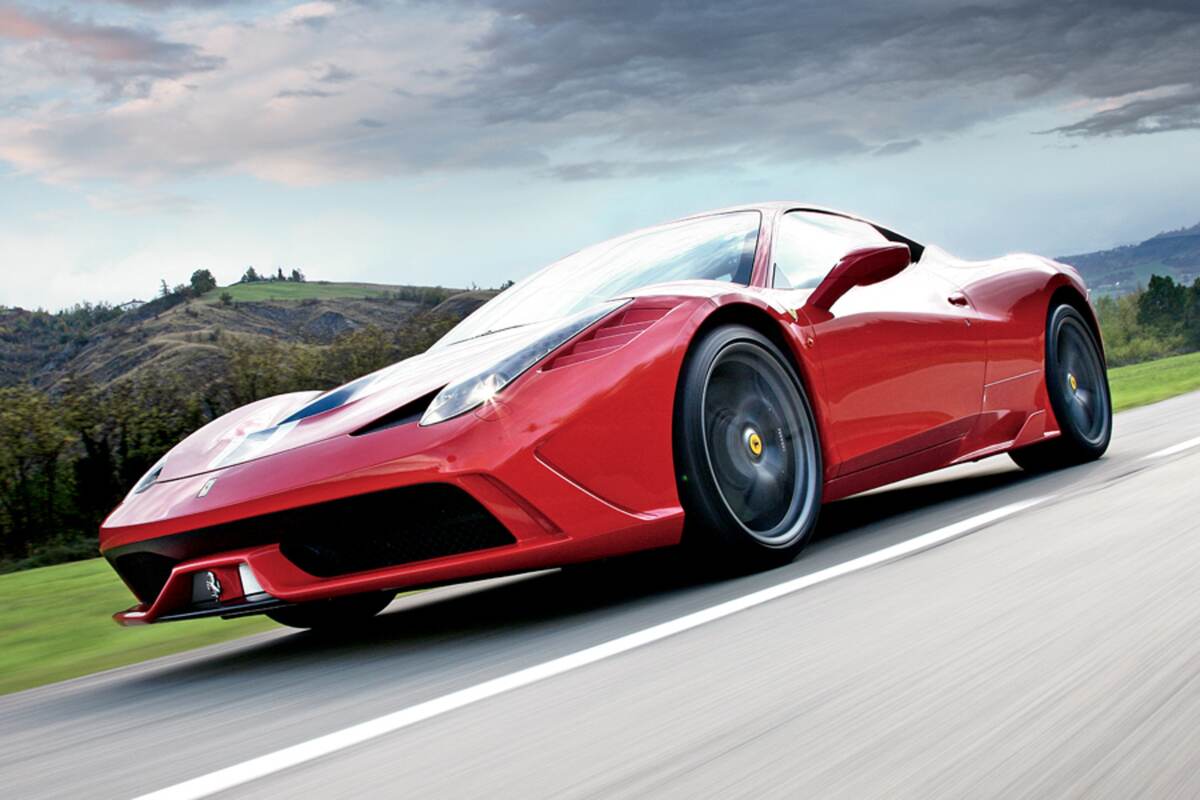 Dario Benuzzi surveys his domain from the canopy of the pit garage as an angry-sounding 458 circles the Fiorano test track. His eyes, as always, are hidden behind shades, but Ferrari’s legendary test driver of the last four decades is watching all right. Critiquing. Scoffing, even. Driving a new Ferrari at Fiorano on a press event is as good as this job gets, but, by God, it’s intimidating. Or it was, until Ferrari launched the 458 Speciale, a supercar designed to make even us mere mortals feel as handy as Dario.

Like the 430 Scuderia and Challenge Stradale before it, the Speciale takes the current mid-engined Ferrari sports car and turns up the wick. Ferrari’s CEO, Amedeo Felisa, reveals the company considered re-using the Scuderia name and creating a performance sub-brand, but decided not to because each car has a subtly different character and set of objectives to meet. I can’t say I’m convinced, because the headlines—more power, less weight and a dynamic character biased towards track work—are quite similar.

When it comes to performance, though, the Speciale lives at a loftier level than its predecessors. Starting with the Italia’s 4.5-liter V8, Ferrari’s engineers fitted new camshafts with 5 percent more lift, redesigned intake runners and new pistons that deliver a barely believable 14:1 compression ratio. Topping all that with an exhaust system offering 25 percent less back pressure pushes power from 570 to 605 ponies. (The Scuderia, for reference, produced “just” 510 hp.) Torque remains the same at 398 lb-ft, but it feels like there’s more of it because the Speciale is 198 pounds lighter than the Italia. 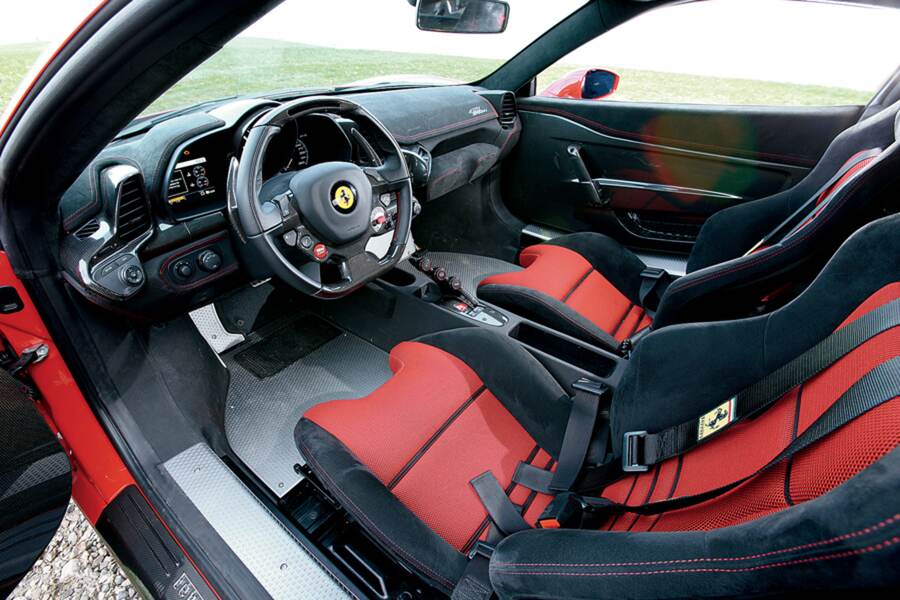 Contributing to that weight loss are lighter engine components, forged 20-inch alloy wheels, a carbon-fiber underbody and thinner front and side glass, along with a Lexan rear window. The interior is similarly pared down; there’s no glove box, for instance, and buyers can delete the radio to save around nine pounds. The carbon-fiber sport seats do without leather, as do the dash and door panels (the latter are beautifully done carbon-fiber items). The floors receive textured aluminum plates instead of carpet, and there’s no evidence of sound deadening. Ferrari specifies a curb weight of 3,075 pounds, but, from the way the thing changes direction when I dive into my first corner, I’d swear it was 400 pounds lighter still.

THAT FIRST CORNER comes at the end of Fiorano’s blisteringly fast start-finish straight. This sharp right-hander is a stern test of car and driver that, three years earlier, had turned into a real heart-in-mouth moment for me. The original 458 was the first Ferrari to feature the company’s now-trademark hyper-quick steering, and at the Italia launch I nearly put the car on the grass right there, within a couple hundred yards of leaving the pits. Having done more miles in 458s since then, the Speciale’s steering no longer feels so shockingly quick—but there is something new, a greater sense of harmony between front and rear axles. 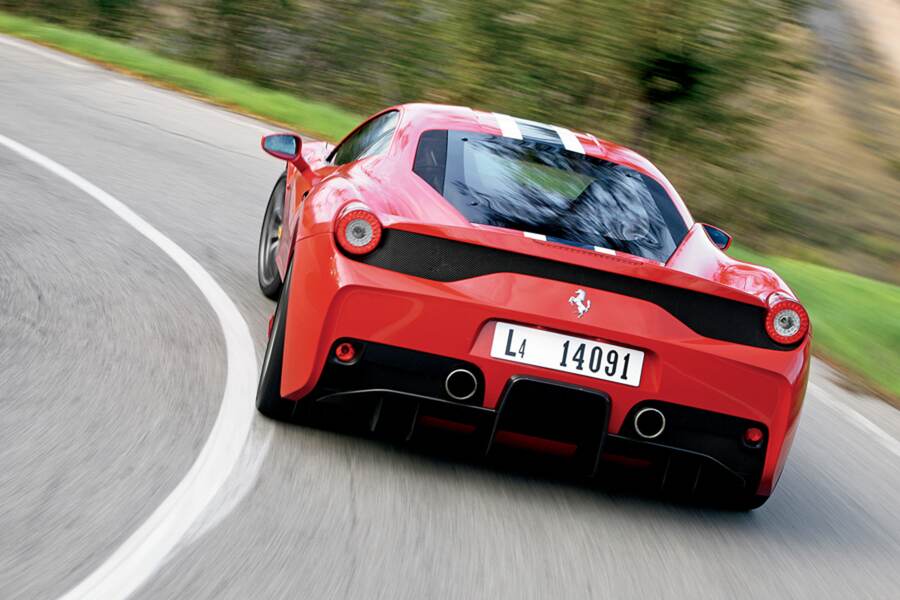 CEO Felisa attributes much of this improved balance and steering feel to the Speciale’s bespoke Michelin Pilot Sport Cup 2 tires. In addition to offering huge amounts of grip, this rubber was reportedly designed not just to reduce lap times but to survive sustained track abuse with no discernible drop in performance. In addition, they’re supposed to provide confidence in wet weather, unlike their predecessor.

“We tried the old Cup 1 tire in the past during development,” says Felisa, referring to the rubber fitted to BMW’s M3 CSL and Porsche’s 911 GT2 and GT2 derivatives, “and it was impressive on the track but it did not work well in the wet, particularly in standing water. We chose not to use it because it is not Ferrari policy to produce a car that can only be enjoyed in certain conditions.”

I couldn’t test the new Michelins’ wet-weather prowess, but was fully able to explore one of the Speciale’s key innovations: a clever bit of software called SSC, for Side Slip (angle) Control. The Speciale has been designed to help non-expert drivers exploit its abilities in total safety, and SSC is central to that effort. The Speciale uses the same differential as the Italia, and its ECU relies on the same data about yaw rate and steering wheel and throttle-pedal angles as that in the standard 458. The difference is how that data is interpreted. 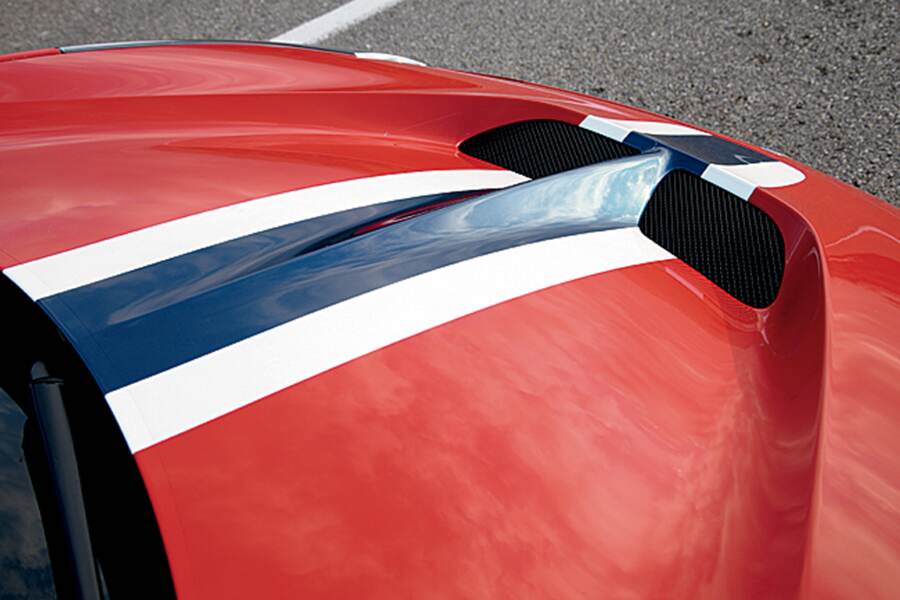 Active in neat and tidy Race, and more flamboyant CT-off, modes, SSC compares the car’s current angle during cornering with a target figure calculated by the system’s brain. Provided the two aren’t too dissimilar, the ECU will not cut engine power to nip under- or oversteer in the bud, but simply vary the degree of lock provided by the electronically controlled rear differential to help turn, or stabilize, the car. If the Speciale is understeering, the diff is unlocked to add agility; if it’s oversteering, more lock will straighten it up.

All of this happens so subtly that you’re genuinely hoodwinked into believing you’re a hero behind the wheel. Furthermore, SSC actively encourages you to edge the rear tires out of line on the faster corners, and only calls on the stability-control system to intervene if you do something really ham-fisted. I can’t think of another car that’s so playful and so flattering while still offering a full electronic safety net.

On my final lap, I’m supposed to cruise around to cool the brakes, but I’m having so much fun I continue at full pelt until just before the last corner, hoping no one will notice. Wishful thinking. When I park, the wheel arches are filled with more smoke than a 1940s movie theater, and one of the technicians has to be dispatched in my car for another lap to put the fire out. Er, sorry about that. But if Ferrari didn’t want its car driven like this, it shouldn’t have equipped it with an astonishingly powerful braking system derived from the LaFerrari. 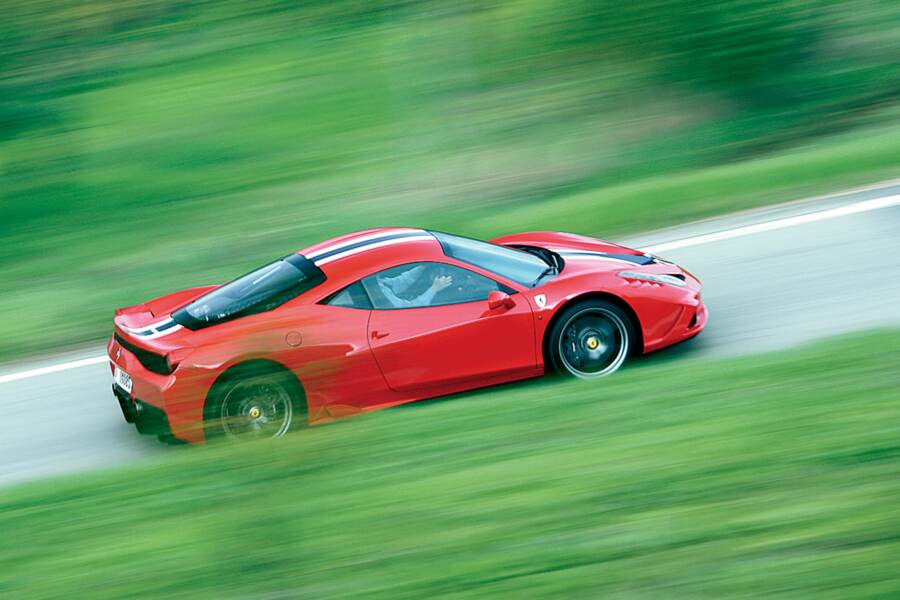 AS IF THE DAY ISN’T ALREADY SPECIAL ENOUGH, Ferrari Chairman Luca di Montezemolo then arrives by helicopter, saunters over and starts talking effusively about the Speciale. “I hate wings,” he says, pointing at the Ferrari’s modestly upturned tail, “so I decided we had to find other ways to improve the aerodynamic performance than fixing a great big wing to the rear.”

Those methods, as di Montezemolo goes on to point out, start with some flexible components in the center of the redesigned front grille, which deform according to the force of air acting on them (an evolution of an idea introduced on the Italia). A pair of vertical grille sections opens at 106 mph, pushing air away from the radiators to reduce drag, while a horizontal bar below moves to direct air to the back of the car above 138 mph, maintaining the optimum front/rear balance. 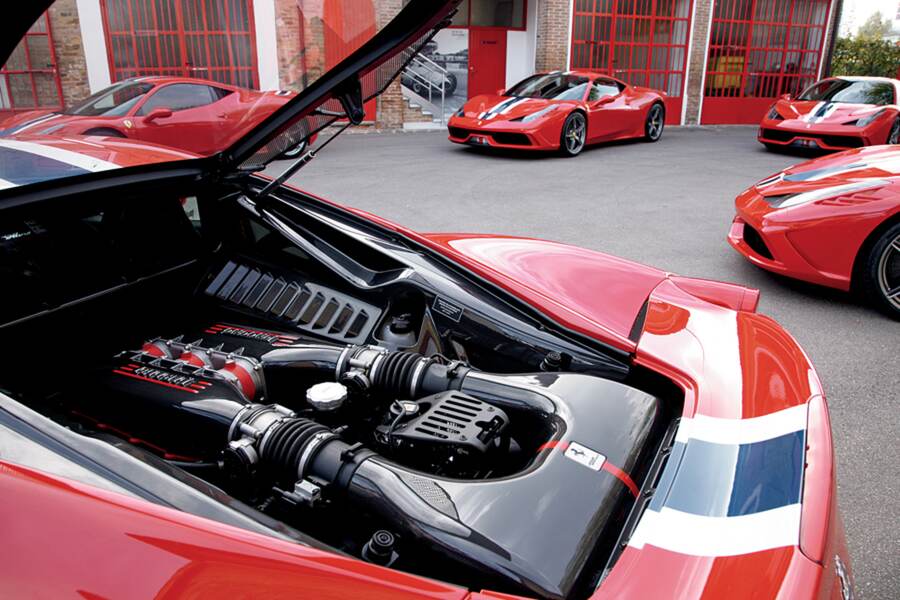 When it gets there, the air meets an active diffuser, which features electronically controlled flaps that switch from maximum downforce to minimum drag depending on the situation, just like the DRS system on current Formula 1 cars. Other changes include tiny fins on the sills just ahead of the rear wheels, aggressive vents at the side of each headlight and a massively scooped hood.

Do all the exterior alterations make the Speciale a better-looking car than the Italia? I’m not so sure, but the new model certainly doesn’t lack presence.

How much effect those aero innovations have at road speeds is debatable, but I venture out into the Emilia-Romagna countryside anyway, because even Ferrari admits that Speciales will likely only accrue 15 percent of their miles on track. It’s immediately obvious that, despite its stiffer springs (up 22 percent in front, 34 percent in back), the Speciale retains much of the Italia’s lauded supple nature. There’s no doubt that it isn’t quite so absorbent, but one push of the Suspension button on the steering wheel instructs the now quicker-acting magneto-rheological shock absorbers to scale back to Defcon 2. 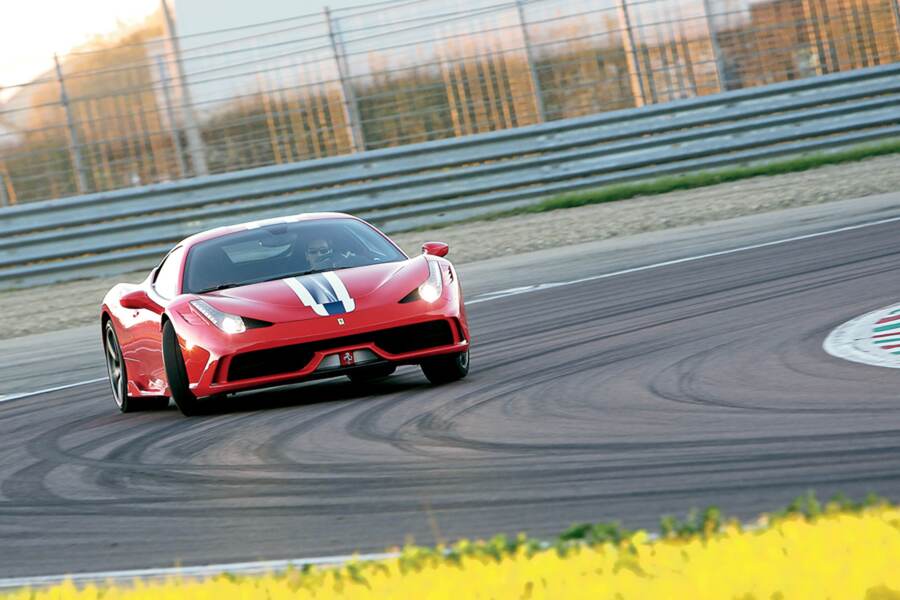 That’s not just to the benefit of comfort, either. The flip side of allowing more wheel travel is increasing the amount of time the tires spend in contact with the tarmac, which in turn means your right foot can spend more time in contact with the accelerator.

And that’s a good thing, because the Speciale’s engine is incredible. A figure of 135 hp/liter would be impressive in a turbocharged engine, and gives the Speciale the highest specific output of any naturally aspirated street-car engine in the world. The revs climb faster than in the Italia, the throttle response is instantaneous, the noise as the 9,000-rpm redline hoves into view as intense as a Brando stare and, incredibly, given the output, there’s stacks of mid-range torque, more so than in the regular 458. Ferrari somehow even managed to improve on the already excellent seven-speed dual-clutch gearbox, shortening upshifts by 10 percent and almost halving downshift times.

More power, faster shifting and less weight have a not-inconsiderable effect on the Speciale’s straight-line performance. The 0-62 mph sprint takes a claimed 3.0 seconds (a 0.2-second improvement over the Italia, although both numbers are likely conservative) and a 0-124 mph (200 km/h) time of only 9.1 seconds, compared with 10.8 for the Italia and 11.4 for the old Scuderia. Incredible. 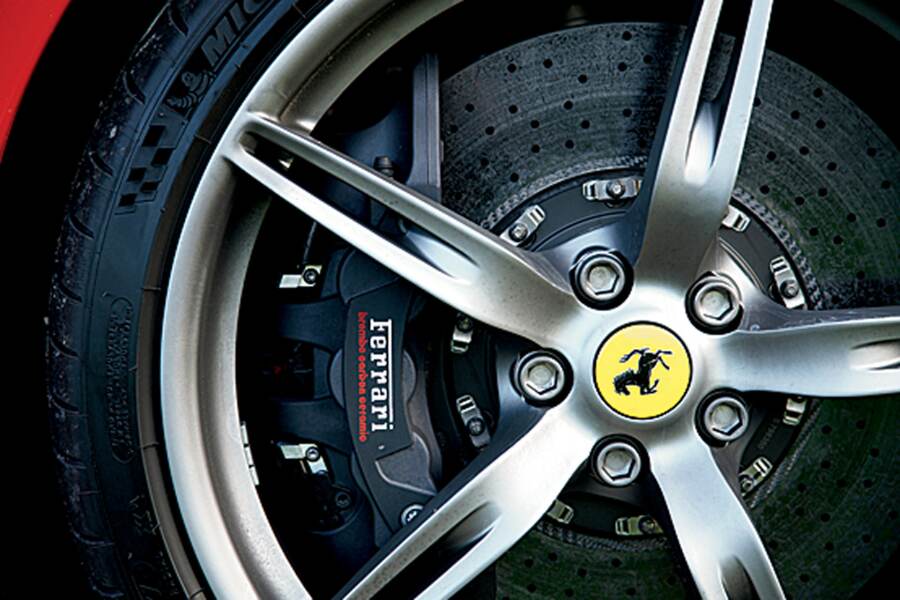 BACK IN MARANELLO, I check in again with Felisa to discuss the Speciale. He’s always interested to hear if there’s something journalists don’t like, because if we don’t like it, chances are his customers won’t, either.

To be honest, I struggle to come up with something to tell him. Maybe you could quibble about the $298,000 base price, a stiff 25-percent increase over the superb Italia, though not once you’d driven it. (Besides, for me, the Speciale and Spider do everything the Italia does, and a whole lot more.) I suppose you could grumble about the additional road noise, but, despite the Spartan interior, tire and wind noise are still low enough to make the Speciale a viable daily driver. After all, it’s a street car first.

In the end, only one criticism comes to mind, and quite literally: I’m nursing a bit of a headache. Ferrari worked hard to keep the Speciale’s external volume down, since many Scuderia owners had problems passing track-day noise tests, but worked equally hard to increase noise inside the cabin. The problem isn’t the volume, though, it’s the frequency and pitch of the intake and exhaust notes, particularly when cruising along at part-throttle. That said, I didn’t notice it when I was driving hard.

One tiny gripe aside, the Speciale is a sensational driver’s car. Sadly, it’s the last of its kind: Ferrari’s next generation of sports cars will feature turbocharged engines. Given Maranello’s ingenuity with technology like the FF’s four-wheel-drive system, those next-gen Ferraris will no doubt be equally thrilling to drive, as well as far more fuel efficient—but matching the induction noise and throttle response of a naturally aspirated engine like the 458’s is going to be a tall order. If the Speciale does turn out to be the swan song for Ferrari’s mostly glorious half-century of naturally aspirated mid-engined sports cars, then no one can accuse them of not going out on a high. 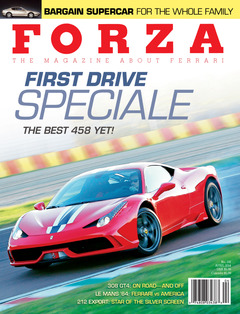