Wider bodywork, bigger wheels and a lower stance give this 308 a serious attitude. 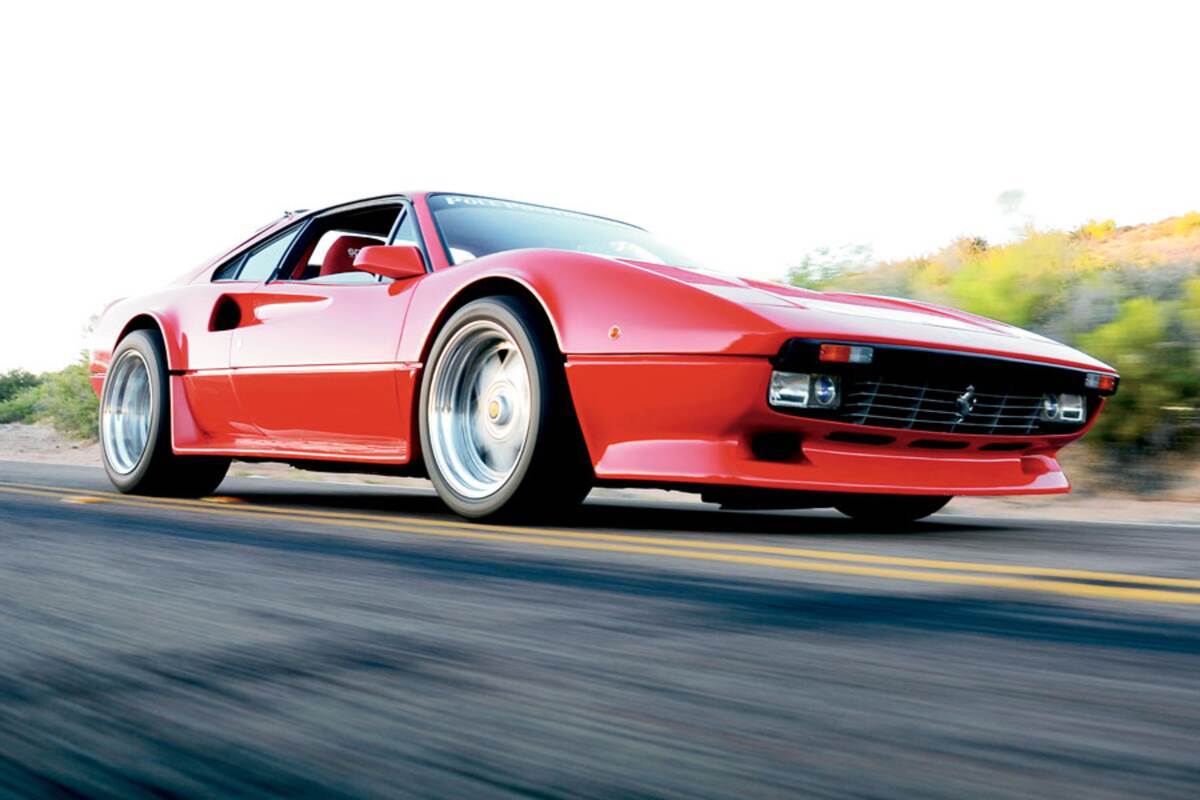 It takes just a cursory glance at Dave Diesen’s 308 GTB (s/n 22703) to see that this car has been modified with a singular purpose in mind: to go faster. The lightweight front and rear decklids are fastened with Dzus fittings. A set of red Sparco seats beckons from inside the cockpit. The stock wheels have been replaced by taller and wider rollers, complemented with flared fenders and a lower ride height.

Once you talk with the car’s owner, it’s not surprising this Ferrari has received such treatment; Diesen has always had a thing for speed. “I raced hydroplanes when I was a teenager,” he says. “I was the youngest person in the U.S. who was racing them.”

A diabetes diagnosis meant that Diesen was disallowed from competition in the thundering speed boats, but he simply switched gears from water to land and began racing motorcycles at Seattle International Raceway in the early 1980s. As far as street cars went, Diesen’s taste ran to anything that was fast and affordable, which meant a lot of American muscle passed through his garage. “I worked as a professional car painter, so I would find cars in fields and then fix them up and drive them,” he says. 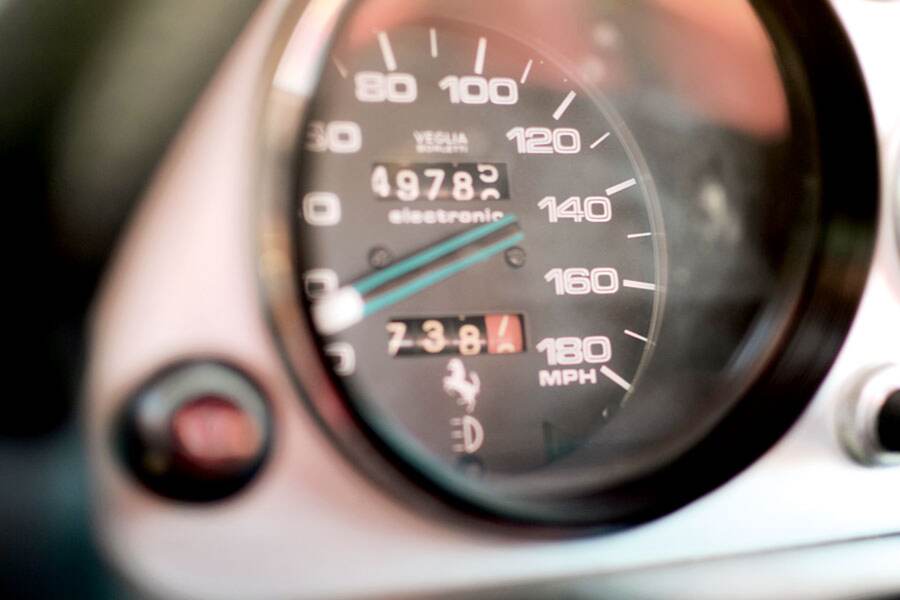 In the late 1980s, Diesen relocated to Mesa, Arizona to study industrial design. A decade later, with a successful career in engineering well under way, he had the means to splurge on a nice classic car. He was initially looking at buying a 1965 Corvette, but his wife, Anita, had a different idea. “She suggested I get one of those cars I always wanted,” he says. She meant a Ferrari, which Diesen didn’t think he could afford. After looking at the market for used 308s, however, he was surprised to find he could get one for about the same price as a mid-year Corvette.

In 2001, Diesen went to look at a 308 GTS for sale at nearby Scottsdale Exotics. “They also had a GTB and I just fell in love with the lines of it,” he says.

The berlinetta was a 1978 model that was still in decent shape, though it was painted a few different shades of red. “It didn’t come with any documents, and a lot of the parts on it, like the springs and sway bars, were chromed,” Diesen recalls. “It wasn’t the kind of car you’d want to turn back to original, but it was a good driver.” 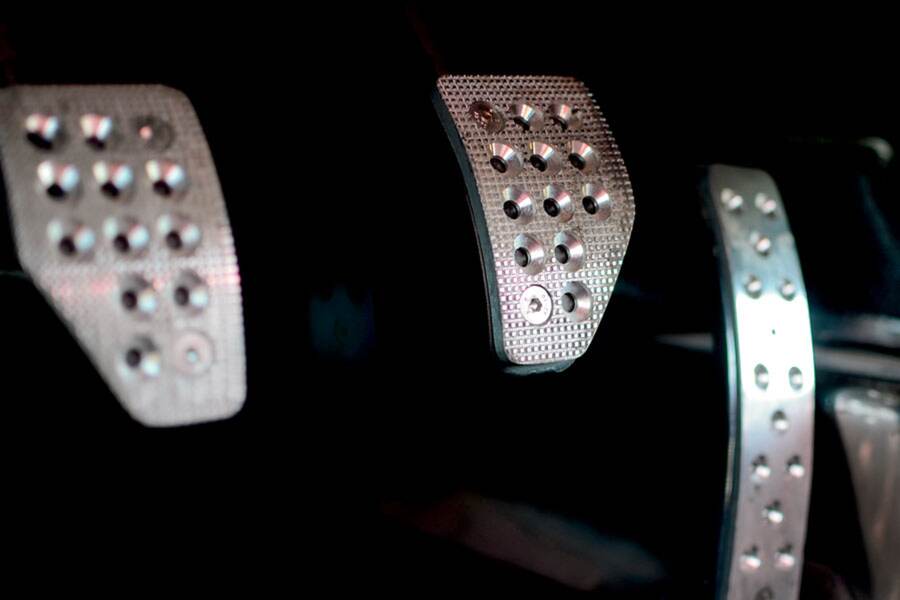 And drive it he did, quickly pressing the Ferrari into service as daily transport. “It was an impressive car for its age,” says Diesen. “It handled extremely well. It was down on power a little compared to more modern cars, but it was a lot of fun.”

A TURNING POINT came about six months later, when Diesen took the 308 to a track day at Phoenix International Raceway, and was hooked. “It’s a great track car,” he says. “Vipers and faster cars like that would pass me in the faster sections of the track on the banking, but the Ferrari was really great on the infield portion. I would end up catching and even passing them in the corners.”

At Diesen’s third track day, however, the rigors of being driven at ten-tenths caught up with the aging Ferrari. “I heard a big bang and then I had no clutch,” he says. The flywheel had exploded, but Diesen took the mechanical failure in stride. He found a replacement ring gear locally, then sent it to McLeod Racing in Placentia, California, which fitted the factory hardware to its own lightweight aluminum flywheel. McLeod also made a billet pressure plate and dual-clutch disc to go with the lighter flywheel. 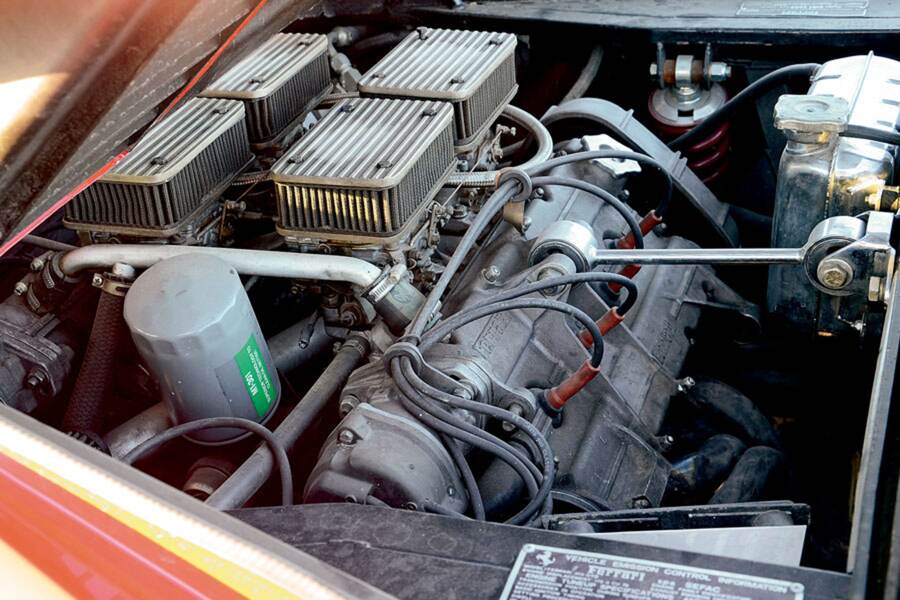 By the time the Ferrari was returned to service, Diesen had replaced the stock 14-inch wheels with wider 16-inch Epsilon mesh wheels and sticky tires. Unfortunately, the 308 was soon grounded again, this time with a leaking radiator. As he had done with the new flywheel, he decided to not only fix the problem but upgrade in the process, ordering a new, larger aluminum radiator from Howe Racing.

Diesen removed the old radiator in his garage, but discovered that the replacement wouldn’t fit into the stock lower mounting saddles, so he pulled out his grinder and started cutting. Funny thing, though: Diesen didn’t stop with the radiator brackets. He also cut off the fan brackets, then, in the name of reducing weight, proceeded to remove the majority of the tubing around the area for the spare tire. Anything that wasn’t essential was soon freed from the Ferrari in a flurry of sparks.

Although he was able to gut the front end of the car, Diesen didn’t have the tools required to put everything back together. So he had the Ferrari towed to the shop of Glen and Adam Neyenhuis, father-and-son fabricators, and the Ferrari’s transformation was soon well and truly underway. 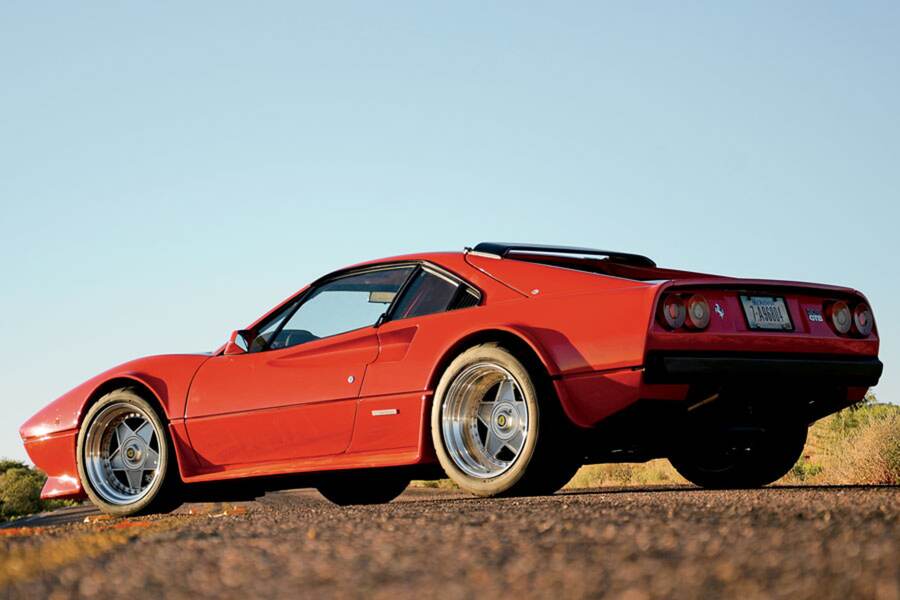 The Neyenhuises welded in new brackets that angled the radiator more towards the horizontal so that heated air could be vented out through the hood. A pair of Derale cooling fans were fastened to the back of the radiator, pulling cool air through the unit rather than pushing it through as with the stock setup.

Diesen had always liked the looks of the Ford GT40 and wanted to incorporate that car’s central hood vent into his Ferrari. Rather than cut up the stock hood, he ordered a lightweight, aftermarket fiberglass version. “When I got the hood, it was very light, but almost flimsy,” notes Diesen. The new vent was grafted in place, where its frame helped to reinforce the hood. At the same time, the stock U.S.-spec front bumper was replaced with a sleeker unit from a 288 GTO. A European 308 QV-style front spoiler with brake ducts was also added. Diesen fabricated a custom grille from a couple of scrap 308 items, and installed PIAA driving lights on either side.

In his quest to add lightness, Diesen next focused on the rear of the car. He again turned to fiberglass, but when the new decklid arrived it proved to be nearly as heavy as the stock unit due to its “chopper gun” method of construction. Diesen, who wanted lighter, hand-laid fiberglass, ended up buying the mold from the company and making his own lid. The hinges were fitted with pins, which allows everything to be removed easily. “Anyone who has changed the spark plugs on a 308 knows how hard they are to get to,” he says. “The easiest way to change them is with the engine lid off.” 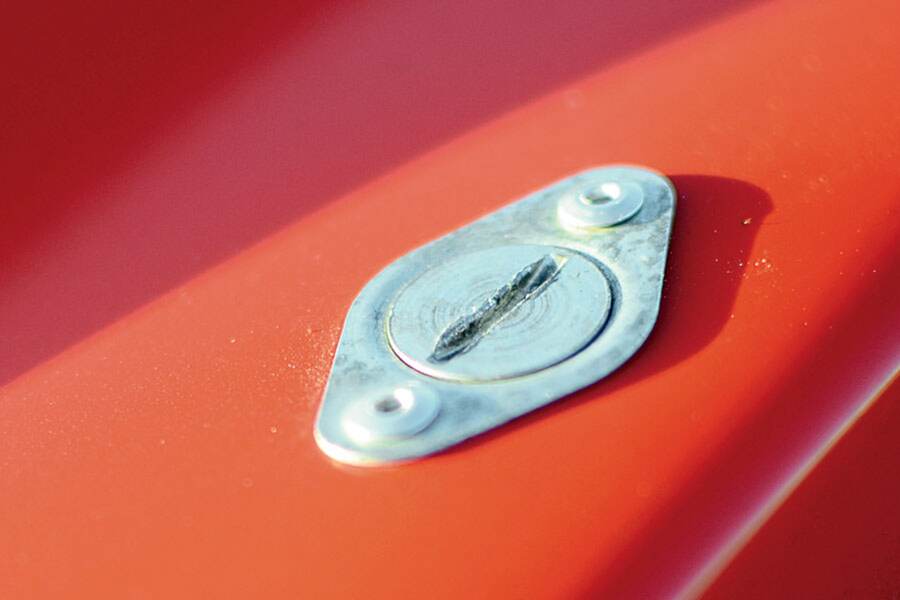 Next up on the bodywork front were a set of Koenig side skirts, rear fender flares and door mirrors. Another father-and-son team, Don and Scotty Barsellotti of Elwood Bodyworks, stripped the Ferrari down to bare metal, fitted the Koenig goodies, and painted everything Rosso Corsa.

The stock suspension wouldn’t do, of course, so Diesen had all four corners upgraded with Koni racing shocks and Eibach springs (400 pounds up front, 350 pounds in back). The rear shocks bolted in, but fitting the front ones required some clever modifications, including fabricating new upper A-arms and installing spacers on the lower factory pieces. A Brembo GT brake kit, which includes larger rotors and calipers, was installed up front, while cross-drilled Brembo discs were partnered with the stock calipers in back. 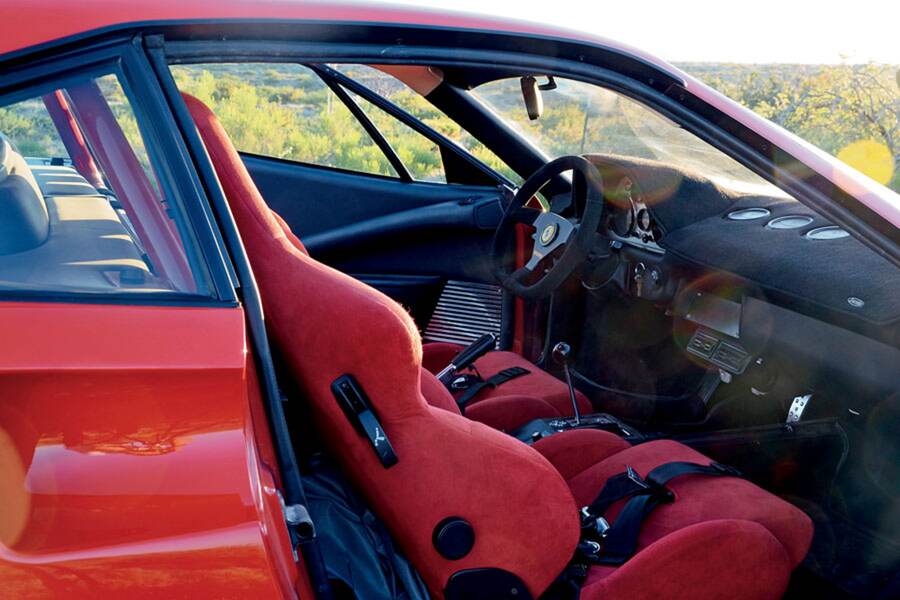 The original 3-liter V8, which has never been opened during Diesen’s ownership, was left stock aside from a custom exhaust. “The front and rear banks each have their own muffler, but the tubes are the same length from the header to the muffler on both banks, then a crossover tube connects the two banks before the mufflers to equalize the pressure,” he explains.

To ensure reliability, the Ferrari’s quartet of Weber carbs was rebuilt. “When you get in and fire it up, it takes you back a few years,” says Diesen of the engine. “I mean, it still has a choke! Most kids don’t even know what that is.”

THE GTB’S GO-FAST AESTHETIC continues with the interior, which means simply getting into the car is a task. I contort myself through the door opening and slide into the Sparco bucket. Once seated, my hands grasp the feel-good suede of a flat-bottomed Momo steering wheel, which opens up space for my legs, and my feet rest on drilled aluminum pedals. Behind sits a red harness bar that was fabricated for the car. This 308 originally had a brown interior, but it’s since been treated to new black carpeting and black panels. I wrestle on the Schroth harness, click the six belts into the center puck and am ready to go. 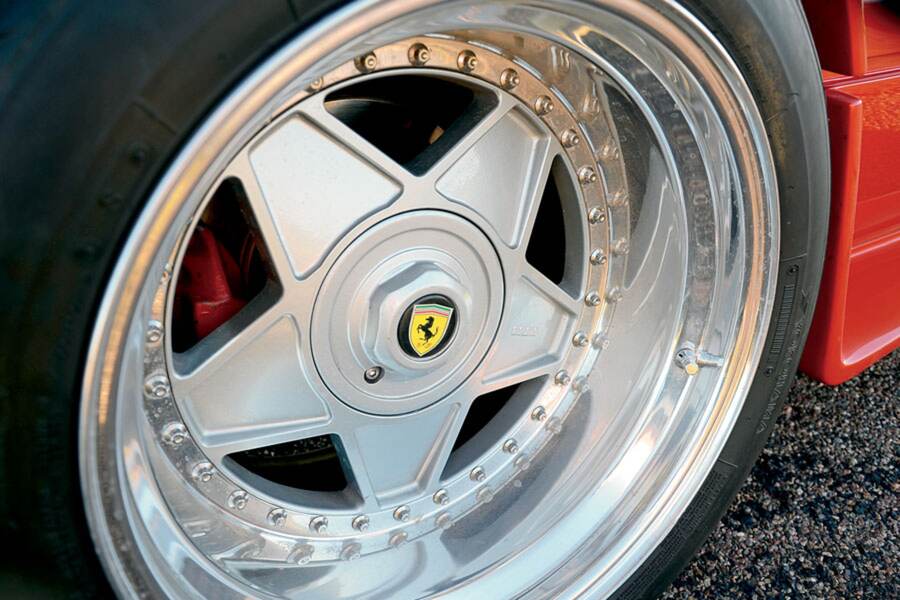 A twist of the key and a prod of the gas pedal light up the engine. The V8 turns over happily at idle, a deep burble spilling out of the new exhaust. When I put my foot on the clutch, it feels like there’s a brick lodged between the pedal and the floorboard—but, after a hefty push depresses it, the shifter slots agreeably into the dog-leg first gear. I release the clutch, which functions essentially as an on-off switch, apply a small dose of gas and am off to the races. Or at least the nearest winding road.

Diesen’s Ferrari proves to be one of the quicker normally aspirated 308s I’ve driven. There’s plentiful mid-range torque, and horsepower continues to build into the upper reaches of the tachometer. The engine revs very quickly, too, with sharp throttle response. Diesen suspects the cams aren’t stock, and I’m inclined to agree. The V8’s soundtrack gets really exciting above 4,000 rpm, when the sharp howl of the exhaust is joined by a throaty induction roar from the carbs—and when I lift off the throttle, the exhaust’s terrific popping and crackling make it sound just like a proper race engine. I soon find myself accelerating and then lifting off just to hear the exhaust do its thing.

At low speeds, the 308’s already heavy steering is made even heavier by the wider-than-stock front tires and smaller-diameter steering wheel, so maneuvering takes some muscle. Once the car gets up to speed, the steering effort lightens up, allowing me to guide the 308 through corners quickly and accurately. Given the oversized rubber, I was expecting diminished feedback, but steering feel is actually pretty good. 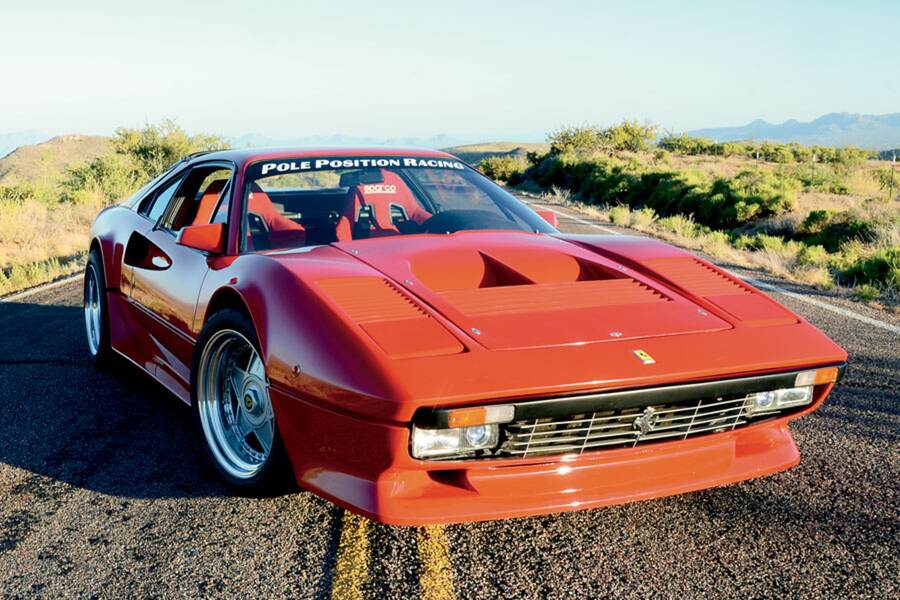 In corners, the lower and stiffer suspension allows very little body roll. And while I was also expecting understeer in tighter turns, thanks to those enormous rear tires, the 308 stays admirably neutral. Even more surprising, the back end seems keen to step out a bit, which makes the car wonderfully engaging to drive. Overall, this 308 feels light, responsive and sure-footed, rotating nicely around tighter corners while staying stable in faster sweepers. When it comes time to brake, the new Brembo setup does a great job, slowing the car with authority.

Diesen’s 308 is rolling proof of the competition breeding that simmers just below the surface of the model. While 308s do not have an illustrious racing background compared to some other Ferraris, that doesn’t mean they don’t take extremely well to performance enhancements. Diesen, who still drives the 308 four to five times a week on the road and takes it to the track every month, couldn’t be happier with his Ferrari. Having driven it, I can certainly see why. 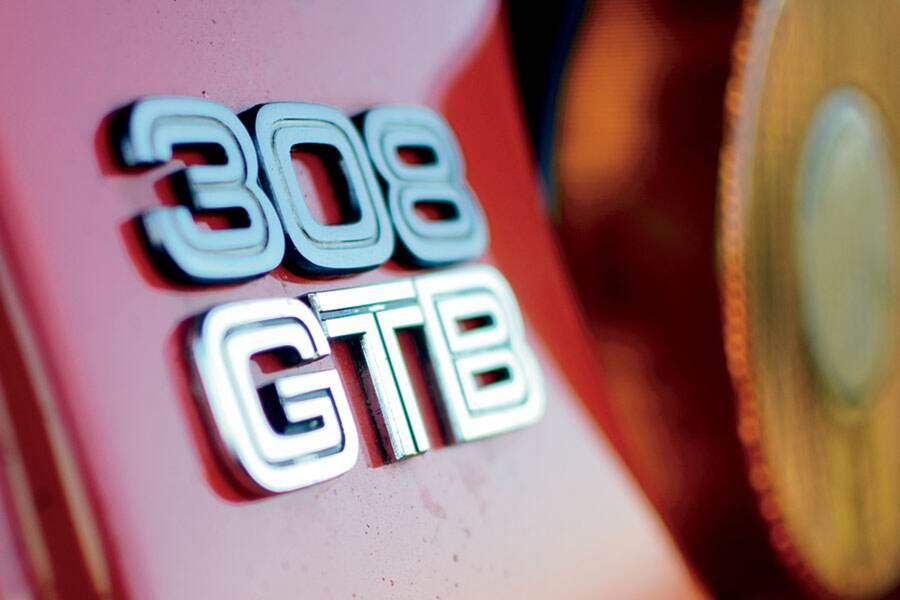 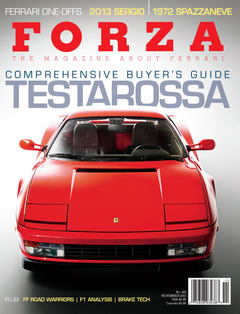