To Live and Drive in L.A.

Everyone knows a Ferrari 458 is the perfect car to tackle the Italian countryside—so we subject a 458 Spider to the urban jungle. 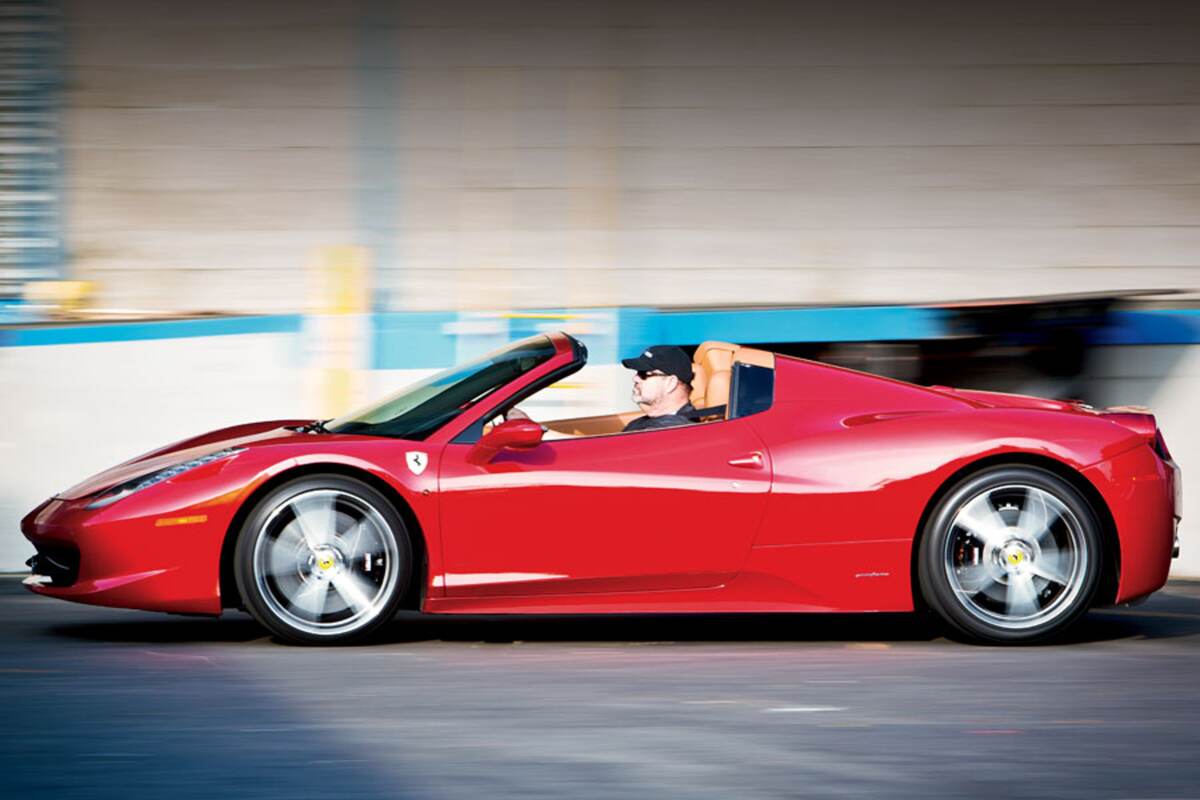 Beyond the fact that it builds cars there, there’s a simple reason Ferrari invites journalists to drive its latest and greatest machines in Italy—driving nearly any car, no matter how pedestrian, through the Northern Italian countryside is a enthusiast’s dream come true. The roads are twisty, traffic is sparse, the scenery is beautiful and the polizia are forgiving. There’s a romance to the experience that simply can’t be beaten. Call it Montezemolo’s Law.

Unfortunately for me, I was tasked with driving the 458 Spider in Los Angeles, home of some of the worst traffic anywhere in the world. The condition of many of the roads is abysmal, and as for the scenery, well, L.A. isn’t much to look at. Worse, I was to drive the Ferrari as if I owned it, tackling the freeway during rush hour, running errands and generally subjecting it to the daily grind.

I’ll admit I would rather have been in the Alps, but at the same time I was curious to see how the Ferrari would handle the challenge. Would this 570-horsepower supercar prove too high-strung for the big city? Would the bloom fall off the Italian rose? 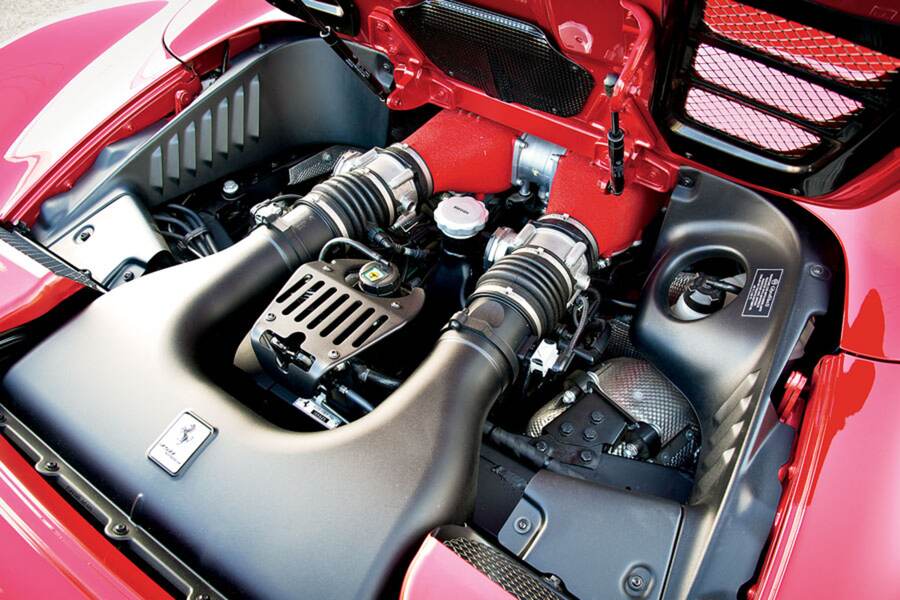 BEFORE I GET INTO THAT, though, let me say right up front: This is one breathtakingly gorgeous machine, every curve and nuance enhanced by the particularly luscious shade of Rosso Fiorano, a bottomless-looking, multi-stage metallic red. One female passerby commented that she’d like a bottle of nail polish in the same color. If I wore polish, I’d want it, too.

If there’s any downside to the current Spider’s styling, it’s the loss of the see-through engine panel found on its F430 predecessor—a concession to the new car’s retractable hardtop. The “vroom with a view” was such a wonderful design touch for this type of automobile that it’s a real shame to lose it. Some romantics might also miss the coachbuilt look of the close-fitting cloth convertible top of previous Spiders, but Ferrari had sound reasons for going the retractable hardtop route, including increased security, improved rigidity and reduced cockpit noise.

Okay, onto city life. I drove the 458 Spider in traffic, over rutted roads—just about everywhere nasty I could think of—and to say the car behaved admirably would be an understatement. It displayed perfect manners at all times, whether it was being repeatedly restarted and repositioned during our photoshoot or creeping along in heavy traffic on a hot freeway. 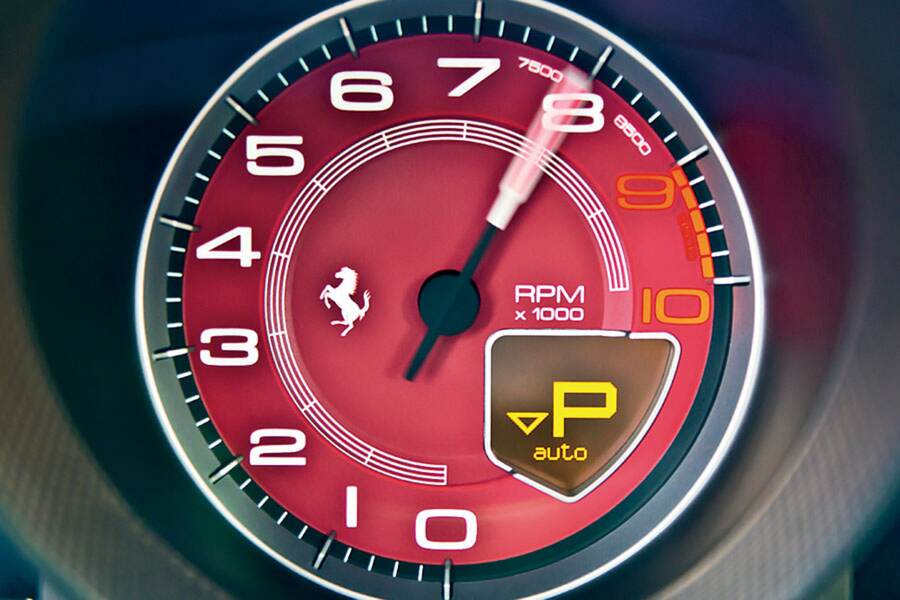 Another example: This Ferrari’s ride quality proved sportily superb. Even with the super-low-profile rubber mounted on 20-inch wheels, the Spider effortlessly soaked up bumps; it took seriously lousy pavement to upset the car’s balance in even the smallest ways. Credit goes to the stiff chassis and the magnetorheological shock absorbers, which constantly adjusted to changing street surfaces and kept the car controlled at all times. When things got really rough, pressing the “Bumpy Road” button on the steering wheel instantly softened the dampers without otherwise changing the car’s behavior—an amazingly useful feature to have. My favorite mode of travel was to leave the manettino set to Sport, which gave outstanding body control and firm, aggressive shifts, yet maintained all the safety benefits offered by the yaw and traction control.

My test Spider featured an optional electrohydraulic system that raises the low, exposed and costly-to-repair front end when it’s time to creep into sharply raked driveways, as well as over tall speed bumps and railroad tracks. It’s effective and easy to use: Just stop prior to the base of the obstacle, press the button on the dashboard, wait for the whining motors to lift the nose several inches and go. Not once did I grind the Spider’s nose, and once the obstacle had been dispatched and I drove on, the car automatically lowered itself back to normal. The system is locked out at anything over a crawl, so it won’t transform the Ferrari into an off-roader, but, that disappointment aside, the lifter certainly proved its worth around L.A.

In terms of cockpit noise, the Spider with its top closed proved to be as well-insulated as a 458 Italia; road noise, including the clatter from idling 18-wheelers, stayed outside. In addition, I heard no squeaks, creaks or rattles from the car itself, even when the top was lowered. 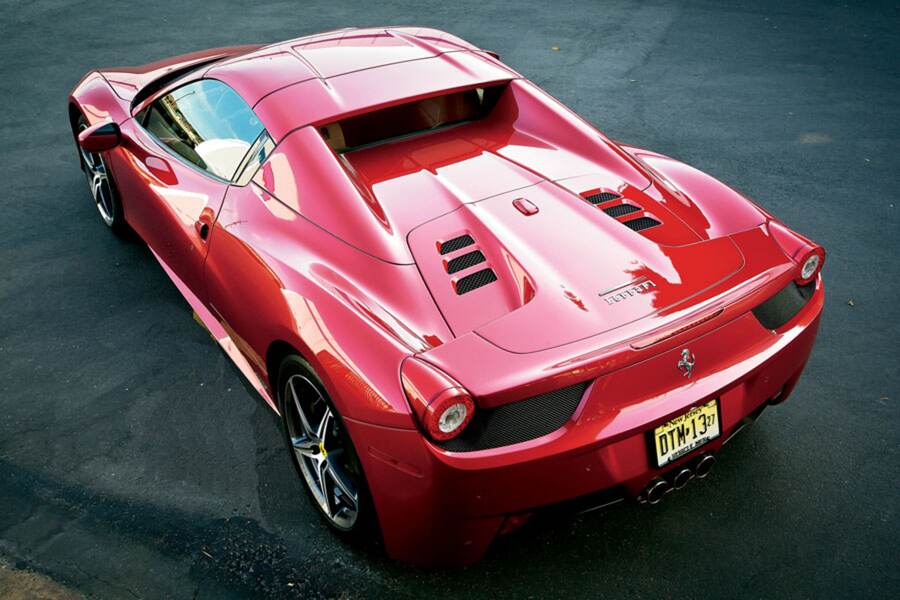 The rear deck’s sweet-looking buttresses do create minor blind spots. However, when the large exterior mirrors are properly adjusted, they give plenty of confidence for lane changes.

Even in my city setting, the dual-clutch F1 transmission was a treat. When traffic was a hassle, or I just didn’t want to be bothered with the effort of pulling on the shift paddles, I placed the gearbox in its automatic mode. In this state, up- and down-shifts were ultra-smooth without being mushy, and if I got hard on the throttle the transmission would delay gear changes. When it did upshift sooner than I might have wished, the engine had so much torque that acceleration didn’t suffer. This is a very tractable powerplant.

I wasn’t so pleased with the 458’s turn signals. Instead of a stalk on the left side of the steering column, as in most cars, the 458 utilizes little rocker buttons on the face of the steering wheel to indicate a change of direction. Unfortunately, the indicators only seemed to stay on for a few seconds, and the slightest movement of the steering wheel canceled the signal, often before I’d completed a turn or lane change. While I appreciate that the design frees up space around the shift paddles, I’d still rather have the stalk. 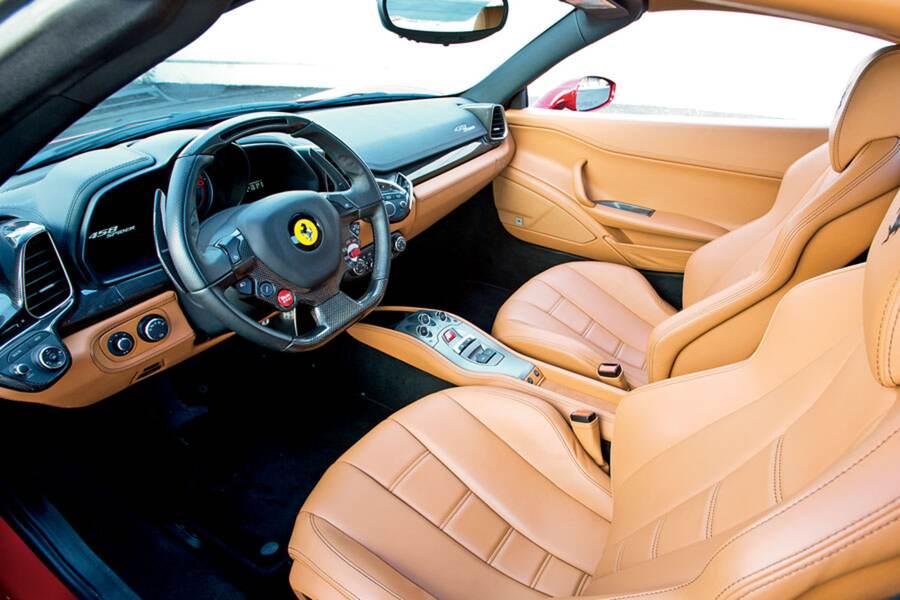 One standard feature I found particularly trick was the retractable rear window. When driving with the top and side windows up, I could drop the rear window to fill the cockpit with the aural delights offered by the high-revving 4.5-liter V8. With this arrangement, there was no wind in the cabin but I could hear every decibel of the engine’s mechanical whirrings, intake roar and aggressively symphonic exhaust note—but not so much that it overwhelmed the cockpit. With the top down, the rear window served as a windblocker, automatically adjusting its height to minimize, and virtually eliminate, buffeting in the cockpit.

WHILE MY MISSION WAS TO EVALUATE THE SPIDER as an every-day supercar, I, of course, couldn’t resist taking it on my favorite twisting roads above L.A. For all its good manners and hassle-free behavior around town, this Ferrari is really in its element in the wild. The 458 is as crazy-fast as its 570-horsepower rating would suggest, but the car’s handling is what really blew my mind. The steering is fast and razor-sharp, and the nose responds instantly to the driver’s commands. The enormously powerful carbon-ceramic brakes tempted me to slow down later and later with every corner.

Without re-opening the philosophical discussion about the merits, values and downsides of paddleshifters versus stick-shifts, suffice it to say the Spider’s seven-speed, dual-clutch gearbox shifts far faster and smoother than any person could. Plus, banging off second-to-third upshifts at 9,000 rpm, the Ferrari ripping forward without hesitation, is one of modern-day driving’s great pleasures. 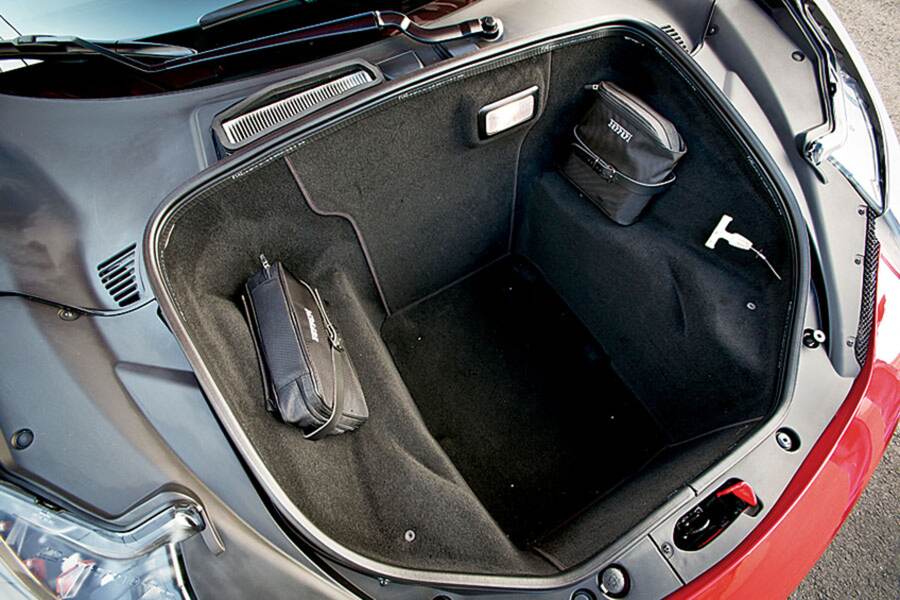 All of this magic comes at a price, of course. The 458 Spider starts at $260,000, and this particular example stickered at an impressive $357,000. The aforementioned front suspension lifter cost $4,600, while the hi-fi sound system added $5,500. Interior leather and carbon-fiber treatments came in at more than $15,000, the parking sensors and rearview camera added $6,000 and the forged, diamond-polished wheels cost $7,500. I don’t know the paint’s price tag, as it was buried inside a $27,000 charge for “Special Features,” but if any color is worth that much dough, it’s this one.

All that, as they say, is the price of exclusivity—and given the wide array of available options, and the relatively low build numbers, it’s unlikely there will be two identical Spiders built. After spending a few days in this one, I think it’s worth every penny—even if all you do is live and drive in L.A.

RETRACTABLE OR FIXED: THE 458 DILEMMA 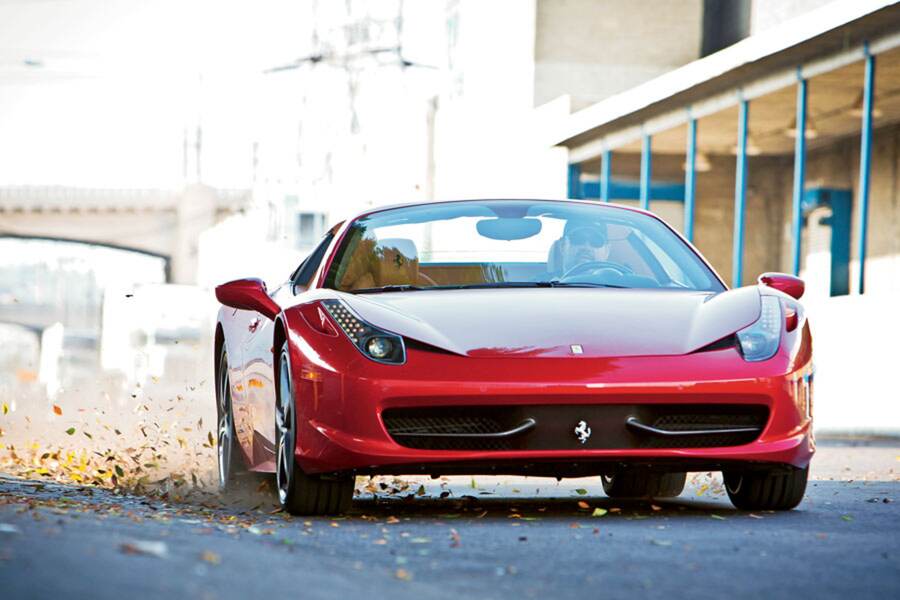 During my time with the 458 Spider, I gave some serious thought to its fixed-roof sibling, the Italia. In our first drive of the open car [“Sky’s the Limit,” FORZA #115], we outlined the differences between the two models, some of which I’ll repeat here.

“The Italia and Spider are in reality as closely related as you would expect. The two cars share their engine, seven-speed dual-clutch F1 gearbox, Ediff3 electronic differential, carbon-ceramic brakes, and aluminum wheels and suspension components—even the spring rates are identical. The Italia and Spider’s aluminum chassis are identical save for the obvious—and some additional reinforcements for the open car—and the convertible wears most of the coupe’s aluminum bodywork, including its nose, hood, front fenders, doors and rear fascia.

“Now the differences. The convertible’s windshield has been raked back a couple of degrees and the rear deck has been completely redesigned. The Italia’s sweeping engine cover has been replaced by a pair of buttresses flanking a mostly flat center section, and its engine-air intakes, mounted just behind the side windows, have disappeared—the Spider’s V8 breathes through inlets underneath the rearmost portion of the deck…[but] the biggest change, of course, is the Spider’s novel aluminum folding roof.” 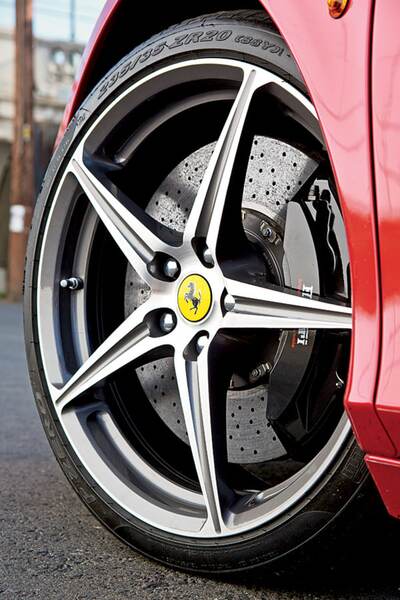 So how do the Spider and Italia compare on the road? Frankly, it would take a very skilled professional driver to discover any meaningful performance differences between the open and closed 458s. Ferrari says that track-day enthusiasts will opt for the Italia, which makes sense, but in spite of an unavoidable reduction in chassis rigidity, the Spider didn’t display any loss of handling precision or high-speed stability. Scuttle shake was non-existent, as well.

So which 458 would I rather have? For my money, it’s the Spider all the way. The open car is more enjoyable and involving to drive, not only because you get to feel the wind and sun, but because the Spider offers a bit more road feel and feedback than I remember in the berlinetta—a welcome change. In addition, you can hear so much of the motor magic taking place just behind you, something that is a little less visceral in the closed car.—M.S. 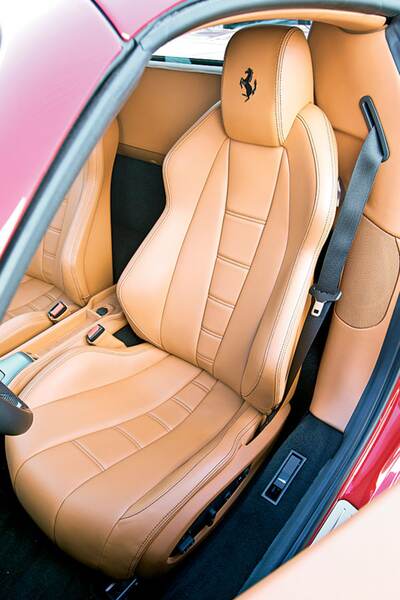 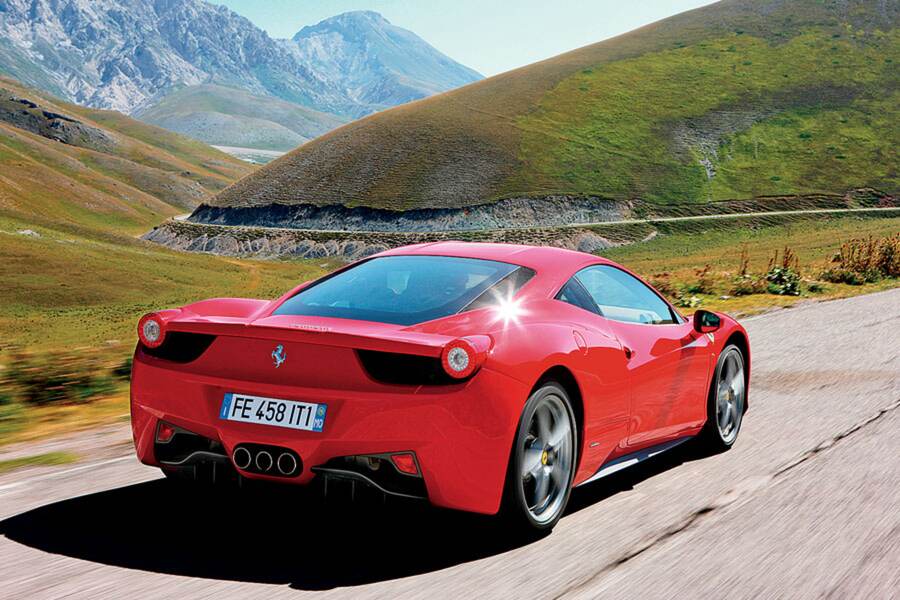 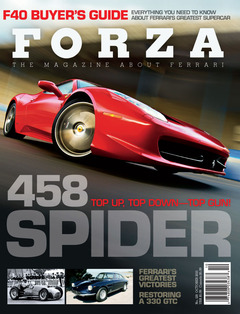