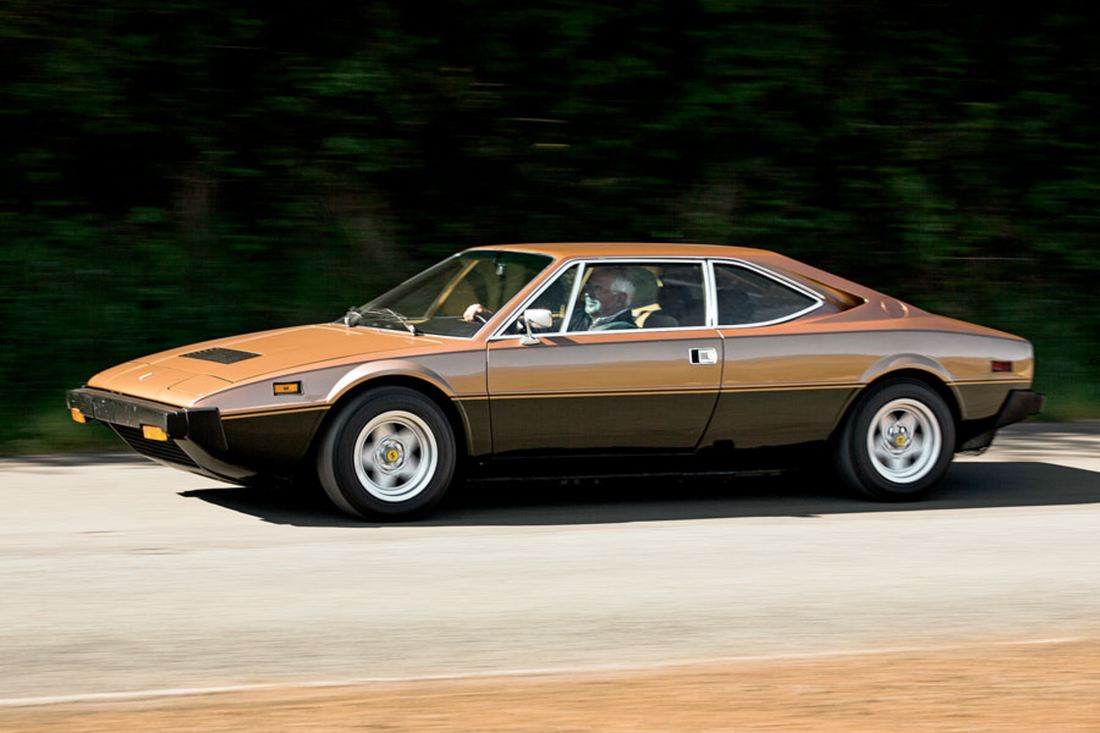 From 20 feet away, Mike Fitz-Gerald’s Dino 308 GT4 (s/n 10606) looks crisp and fresh in its Nocciola Metallazzato (hazelnut metallic) paint, which shifts from medium brown to gold depending on the light. At 10 feet, a couple of scrapes become visible, as does a missing inch of pinstriping. From 5 feet away, a few rock chips, chipped paint along the rear edge of the driver’s door, some nicks in the bumpers and scuffed brightwork come into view. Clearly, this is no diaper-dried trailer queen.

“I think it shows great!” Fitz-Gerald says cheerfully. “It was repainted in the original color, let’s see, about 23 years ago. It had a little bit of rust repair, at the bottom of the doors, around the same time. Oh, and a truck that was being towed by another truck hit it once when it was parked outside a restaurant in San Francisco. I bought a new quarter panel, but they only needed the rearmost foot of it, so I had the rest painted red and hung it on the mantel. It’s still there; people see it and wonder what the hell it is.”

If Fitz-Gerald doesn’t sound like a stereotypical Ferrari owner, even though he’s owned six Prancing Horses over the years, his 308 GT4 certainly doesn’t come across as a stereotypical Ferrari. Nor could it, with 217,727 miles on its odometer. That’s right: Over the last 35 years, Fitz-Gerald has driven this car nearly the distance from the Earth to the moon. Given that feat, this Ferrari looks fantastic. 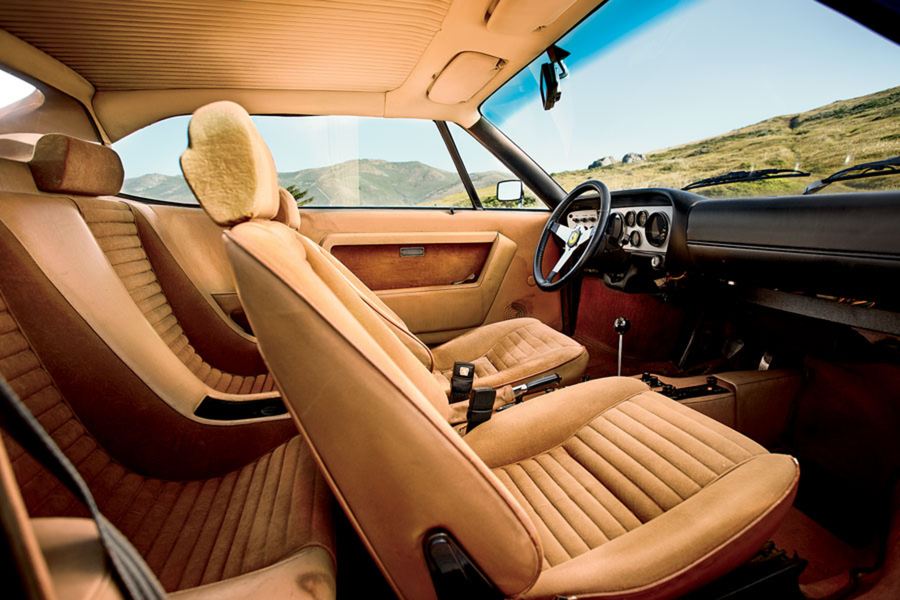 INTRODUCED AT THE 1973 PARIS AUTO SHOW, the Dino 308 GT4 marked a significant departure for Ferrari. For starters, it was the first road-going Ferrari to be powered by a V8 engine. This 90° DOHC 3-liter powerplant, rated at 240 horsepower in U.S. specification, was tucked behind the cockpit. A mid-engine 2+2 was another first for Ferrari, although the layout wasn’t completely successful; the rear seats were sized for small children.

The most noticeable change to the status quo was the GT4’s angular, wedge-shaped design, which was quite different from other Ferraris of the era. The reason was simple: While Pininfarina had styled every Ferrari street car since the mid-1950s, including the Dino 206/246, the 308 GT4 had been penned by Bertone. This seemingly odd decision came about because Bertone, which at the time was best known for designing Lamborghinis, had created the Fiat Dino 2+2.

While the 308 GT4’s exterior styling was controversial, its engine and handling were universally praised; indeed, the GT4 is widely considered a better handling machine than the later, smaller 308 GTB/GTS. Sales were initially slow, but picked up significantly in mid-1976 when the cars began to be badged as Ferraris. Between 1974 and 1980, 2,826 GT4s were built. 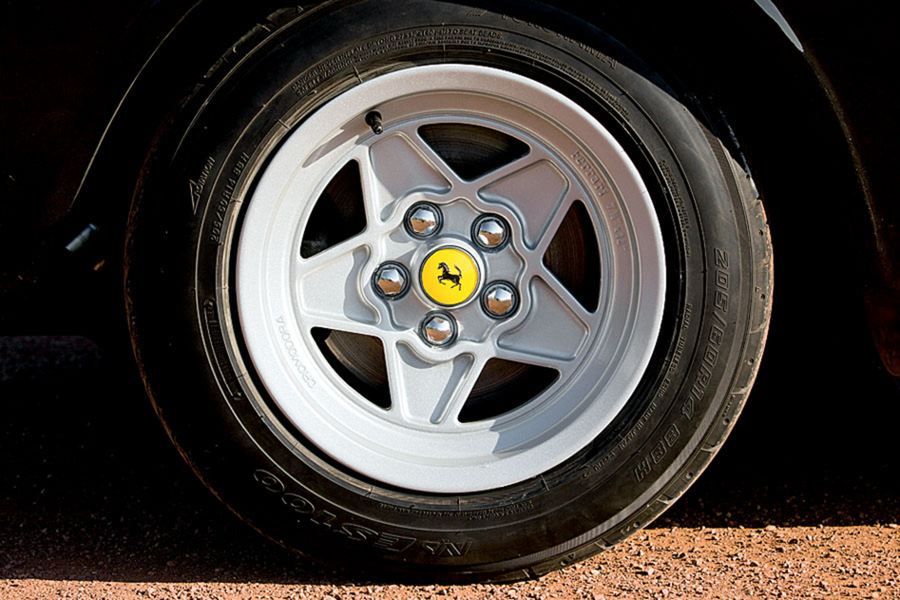 Our featured car is a 1975 model (the Ferrari badge on the nose and the wheels were added after the car left the factory), and it lived an unusual life before Fitz-Gerald purchased it in 1978. “The car was bought new by Bob Benson of Bob Benson Buick in Petaluma, California,” explains Fitz-Gerald. “Bob was also a Ferrari collector. He’d buy a brand-new Ferrari, put it in his showroom and leave the window sticker on the car. When people came in to look at the Ferrari, they’d be aghast at the price, and his salesmen would ask, ‘Wouldn’t you rather have a Buick?’ The 308 GT4 may have been the poor man’s Ferrari, but it was still an expensive car; the window sticker lists it at $26,000, and Buicks were maybe $4,000.”

After its stint in the Buick dealership, the Dino was stored in a barn, along with some of Benson’s other Ferraris, until it was put up for sale at Ferrari of San Francisco. That’s where Fitz-Gerald, a one-time truck driver who had since become a stock broker, found it. “I had always owned fairly nice cars—a ’57 Chevy Bel Air, an Austin-Healy Mk. III, a Datsun 240Z—and after I sold the Datsun, I got this,” he says. “It had just 400 miles on it, and I was the first registered owner. Unfortunately, it dropped a valve within the first 5,000 miles because it had just been sitting in that barn for a couple of years.”

After the valve was repaired, Fitz-Gerald pressed the GT4 into regular use. “It was my daily driver, and I commuted from my home in Tiburon to my job in San Francisco,” he says. “I used it for business, I used it for pleasure, I did everything in it. Most people don’t drive their Ferraris—they have them as museum pieces—and they need to be driven to be reliable. This car has always been reliable; I drove it regularly until 2007.” 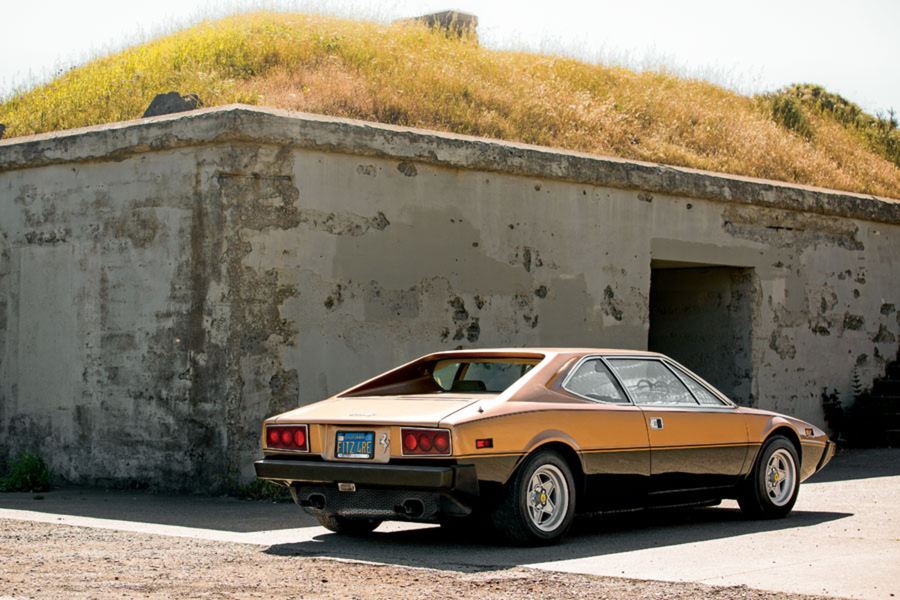 At that time, the Ferrari had around 213,000 miles on the clock. Its engine had been rebuilt once, at roughly 100,000 miles, and it was time for a second rebuild. “These are aluminum blocks, so they’ll go forever,” says Fitz-Gerald. “All you need to do is re-sleeve ’em, adjust the valves, change the plugs, change the bearings, and they’re better than new.”

The clutch has also been replaced twice—once for each engine rebuild. The first clutch was only about 70-percent worn at the 100,000-mile mark, a longevity Fitz-Gerald attributes simply to taking the transmission out of gear whenever he was stopped at a traffic light. The original shifter wore out in the early 2000s.

Fitz-Gerald performs much of the Ferrari’s routine maintenance himself, and says that the car is easy to work on. “I do all the oil changes and things like that,” he explains. “Although, at my 60th birthday party, my son, who was four years old when I bought the car, told the story of how I once accidentally drained the transmission oil instead of the engine oil. I figured it out before I restarted the car; I had been wondering why the oil I drained out was so clean!” 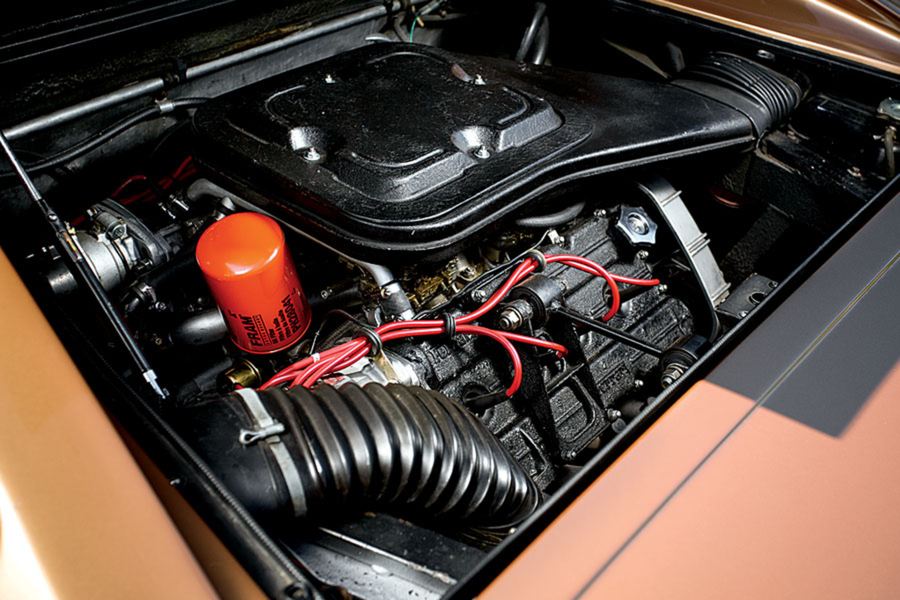 For more involved maintenance and repairs, he sends the car to mechanic Larry Buskirk in nearby Novato, who’s been working on it for more than 30 years. “He just knows everything about these cars,” says Fitz-Gerald. “I have Larry do the valve adjustments, the carburetor adjustments, things like that. It’s got four two-barrel Webbers on it, so it’s a little intricate.”

Fitz-Gerald has kept the Ferrari mostly stock, but has upgraded a few items for improved performance. “We changed the ignition to an MSD setup, and I had glass packs put on,” he says. “I also wanted a better stance, so I put on these 60-series tires; I felt the original 70-series tires were a little too tall. It’s probably my imagination, but it seems to handle a little bit better with them.”

While he’s also owned two 400i’s, two Testarossas and a 550 Maranello, Fitz-Gerald thinks the 308 GT4 is the most fun to drive. “It’s like driving a go-kart,” he says. “You’re low, down on the ground, it doesn’t have assisted steering and it’s quite easy to drive. The other cars were much heavier, and you felt that. One time, my wife, Carolyn, and I drove the car to Idaho, and we took the back roads to Boise. I ran it at 130 mph for around 200 miles. It felt like flying an airplane, so smooth and controlled.” 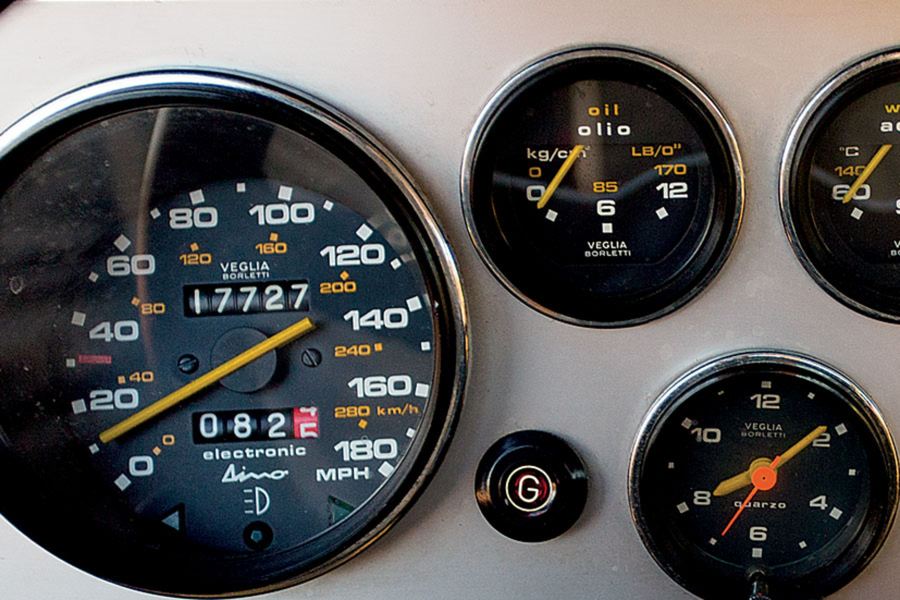 WHEN IT’S TIME TO SWITCH PHOTO LOCATIONS, I catch a ride in the Dino. After I tug the seat belt out of a small clip on the floor—“You didn’t have to wear seat belts back then, and that kept it out of the way if you didn’t want to,” Fitz-Gerald explains—and settle into the passenger’s seat, I take a few moments to scope out my surroundings. Almost everything here is original. The leather on the door panels, center console and emergency-brake boot has aged gracefully, with just a few scuffs and an occasional stain. The dashboard and instrument panel look essentially new, and the fabric-wrapped seats are in remarkably good condition. The driver’s seat, which is the only one that’s been recovered, features a backrest that’s slightly twisted from the number of times Fitz-Gerald has climbed in and out. His left foot has worn a hole in the carpet between the clutch pedal and footrest.

The Ferrari’s carbureted engine fires quickly, and sounds as if it’s sitting much closer to me than it actually is. The V8 buzzes and fizzes along happily as we drive, the glass-pack mufflers giving the exhaust note a touch of bass. The car feels planted and rides smoothly over broken pavement, and while I later witness it bouncing around a bit at speed, I never felt that sensation while inside. The footwells are narrow, but there’s still enough space to stretch out comfortably—so long as there’s no one sitting in back.

“I’ve had four adults in the car,” Fitz-Gerald notes. “The ones in the back weren’t comfortable, and we had to move the front seats forward a lot, but it was good enough to get them to the airport.” 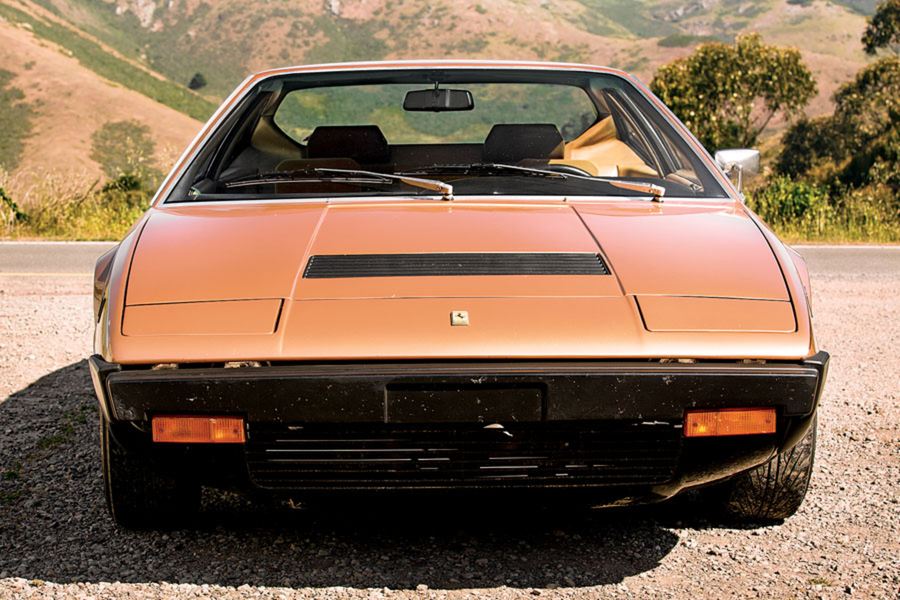 Then, as we back up in a dirt parking lot to turn around, the GT4’s rear wheels suddenly drop into a crevice that had been invisible. The car bottoms out with a crash, bouncing us back in the seats. “Shit!” Fitz-Gerald exclaims, peering anxiously into the rearview mirror. Then he shrugs and smiles. “Well, at least we got the photography done first.”

Later, Fitz-Gerald peers under the rear valance and happily reports that the mufflers weren’t damaged. “It must have just hit in the middle,” he says, completely dismissing the incident.

That’s the kind of attitude it takes to cover nearly 220,000 miles in a Ferrari. And the best thing of all is that both the owner and his car are better for the experience. 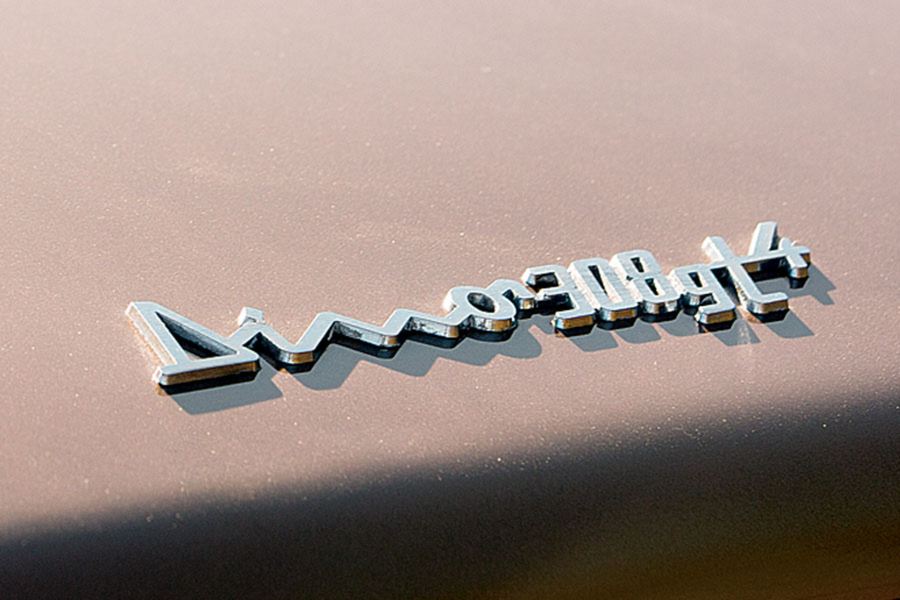 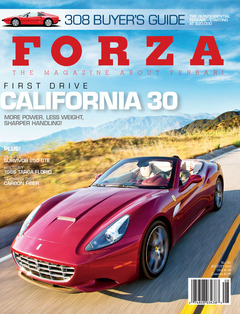