The Right Amount of Wrong

This street-legal 348 blends go-fast hardware from the Ferrari Challenge series, the aftermarket and even Toyota. 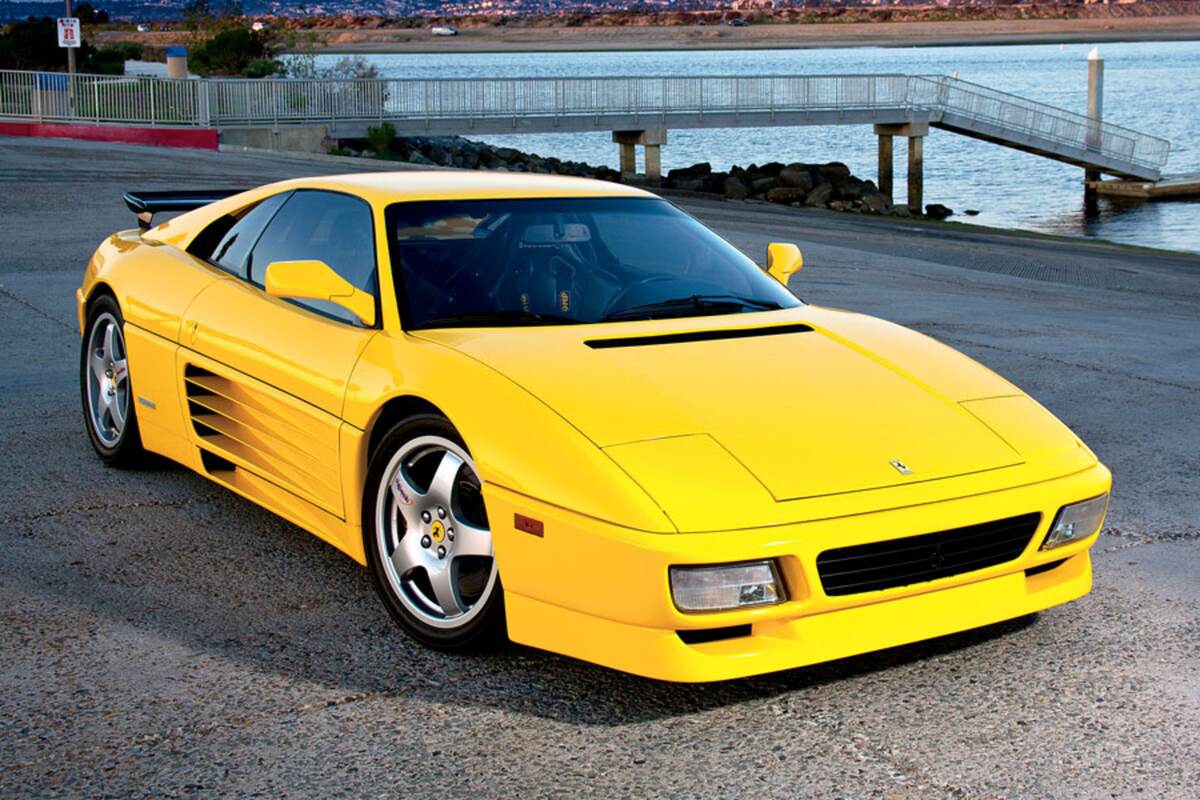 Story and photos by Les Bidrawn

Futzing with a Ferrari is a risky proposition at best. Our friends in Italy spend exorbitant amounts of time and money developing their products to the point that, for most owners, the only thing you need to add is fuel. Most attempts at Ferrari “tuning” make the car different, not better, and there’s a big difference between the two. It’s enough to make Enzo Ferrari spin in his grave at 8,900 rpm.

I was therefore somewhat skeptical when I crossed paths with this screaming yellow 1994 348 Challenge (s/n 98498). At first glance, its resume read like a boy-racer fantasy—twin turbochargers, an intercooler, custom interior, uprated suspension and brakes—and I halfway expected to encounter the dying gasps of a racetrack refuge.

The truth was quite different: Stacey Slead’s 348 looks like it could have just rolled off the Maranello production line. The attention to detail is simply stunning, as are the integration of numerous components from a later-model Ferrari and the astonishing amount of power produced by the 3.4-liter engine, more on which shortly. Maybe, I thought, Enzo wouldn’t be so quick to condemn this car. 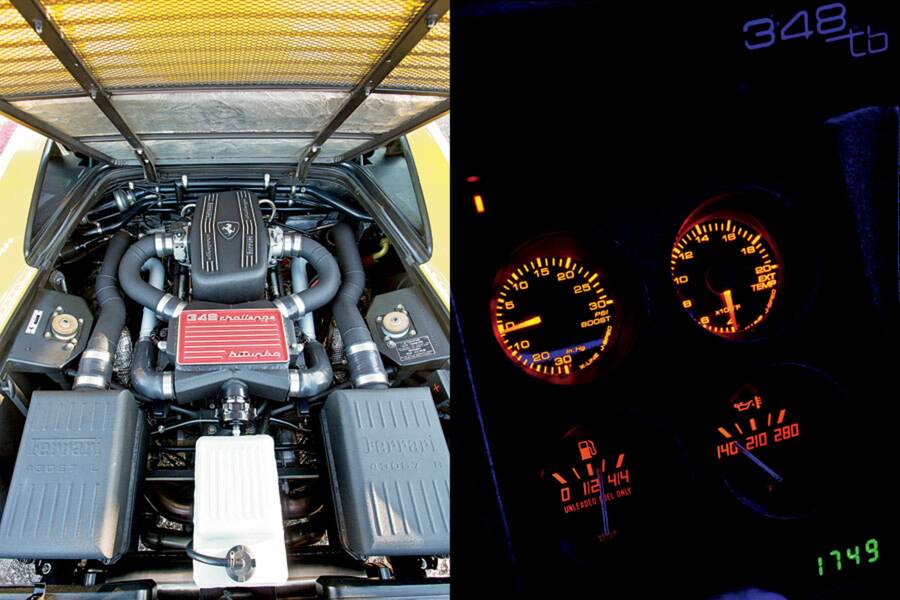 IN THEIR UNASSUMING SHOP near San Diego, California, Ferrari mechanics Slead and Steve Maxwell endure the daily thunder produced by F18 Hornets and F16s operating from the Marines’ nearby Miramar air station. The entire building shakes as a pair of Harriers screams overhead, and I cover my ears like a 10-year-old at a Megadeth concert. Slead and Maxwell don’t flinch; they’ve got their collective noses deep in Solidworks software, reviewing some new intake trumpets Maxwell just designed. Essentially joined at the hip, the pair have been friends and business partners ever since they met courtesy of an ’80s Maserati.

“I was having the typical problems with my Maserati—basically, everything,” recalled Slead. “Steve took a look at it, shook his head and threw me the keys to a Ferrari 348 that was for sale in his shop. That was it. I was hooked.”

Slead bought that 348 and happily began driving it. But one day, Slead and Maxwell, who are both huge fans of the Ferrari F40, looked at each other and said, We need to put a couple of turbos on this car. Maxwell had previously turbocharged several high-end Italian cars, and surmised the same twin-turbo architecture would lend itself well to the 348’s V8. The engine was promptly pulled and torn down, and a replacement mill was fitted so Slead could continue driving the car in the meantime. As fate would have it, however, the Ferrari was soon totalled in a traffic accident. 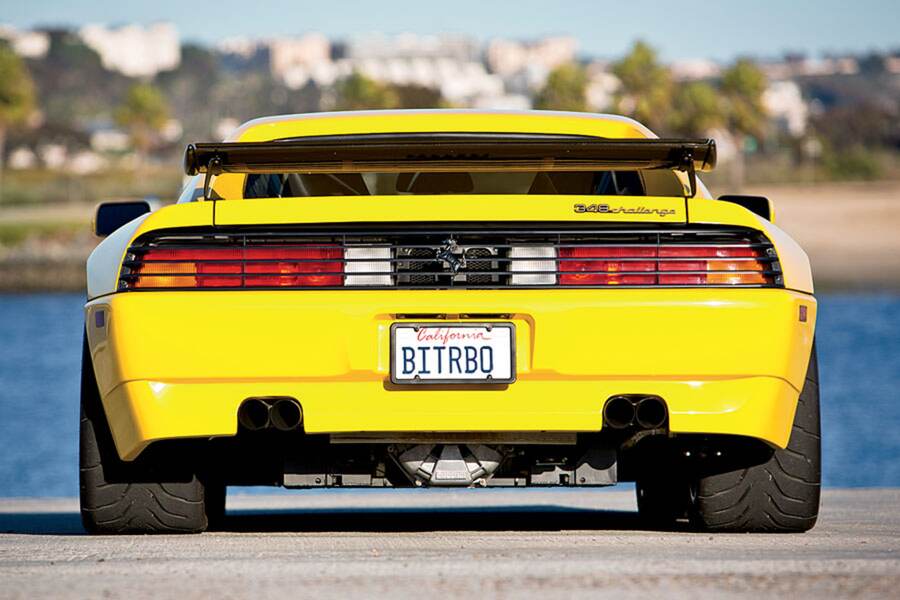 Slead was still determined to build his dream 348, so he quickly began a search for a new chassis. But he decided to raise his game and start not with a street car but with a 348 Challenge race car.

A quick history lesson: In 1994, Ferrari launched the Ferrari 348 Challenge series. The idea was that gentleman racers would compete in identical, race-prepped 348s, which were essentially road cars modified with a roll cage, racing seat and harness, lightweight wheels and slick tires, a fire extinguisher, tow hooks and the like. The road car’s engine remained stock, but a new exhaust system reportedly bumped output by 20 hp. All this racing hardware was installed by the dealer on the customer’s car.

Slead’s 348 was raced in the inaugural Challenge season by Sam Bardor of Mexico, then Brian DeVries of Michigan took over for ’95. By the time Slead found the Ferrari in 2008, it was a proverbial mess, a typically rode-hard-and-put-away-wet street racer. But it was a suitable starting point, so he purchased it. 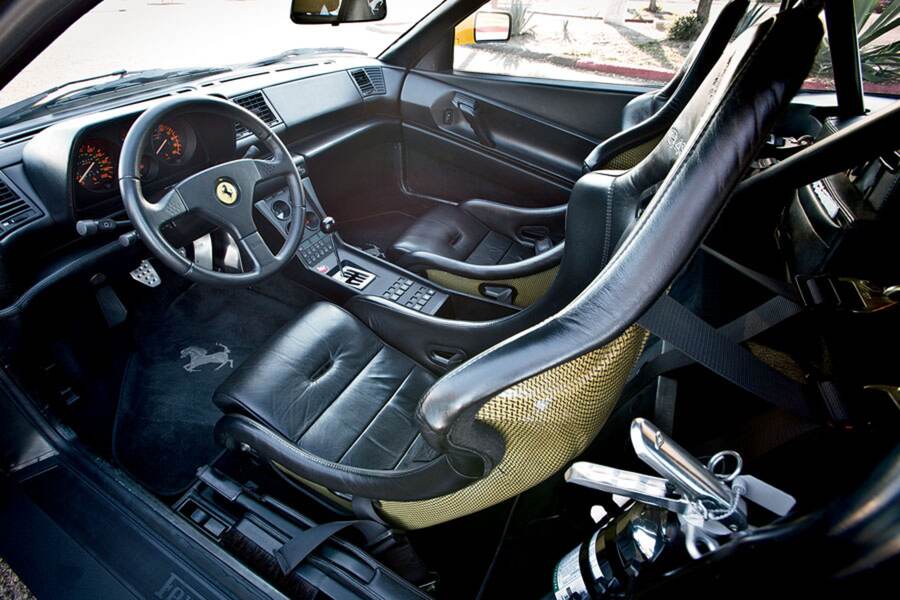 Slead and Maxwell would later strip the 348 down to its bare shell and send it off to GA CoachWorks for a full respray in factory-correct BASF Fly Yellow paint. In the meantime, though, they had an engine to build.

WITH AN EYE ON THE V’8 FUTURE of forced induction, Maxwell replaced the 3.4-liter mill’s rotating assembly with lower-compression JE pistons, Ferrea valves, lightweight Carillo rods and an optimized stock crankshaft. Ported and polished cylinder heads were matched to the exhaust flanges, while the guideplates were machined to match the intake port and runners. “We were going to be moving much more air through the engine, so the smoother the path, the better,” said Maxwell.

A pair of Performance Techniques 60-62 T-04 turbochargers was fitted alongside the engine, fed by equal-length, four-into-one Inconel headers of Maxwell’s own design. Tial wastegates and relief valves regulate the pressurized air, which normally runs from 9 to 12 psi. Maxwell designed his own stainless-steel exhaust system, a nifty piece of engineering that would endow this Ferrari with two voices: spirited or virtually silent. 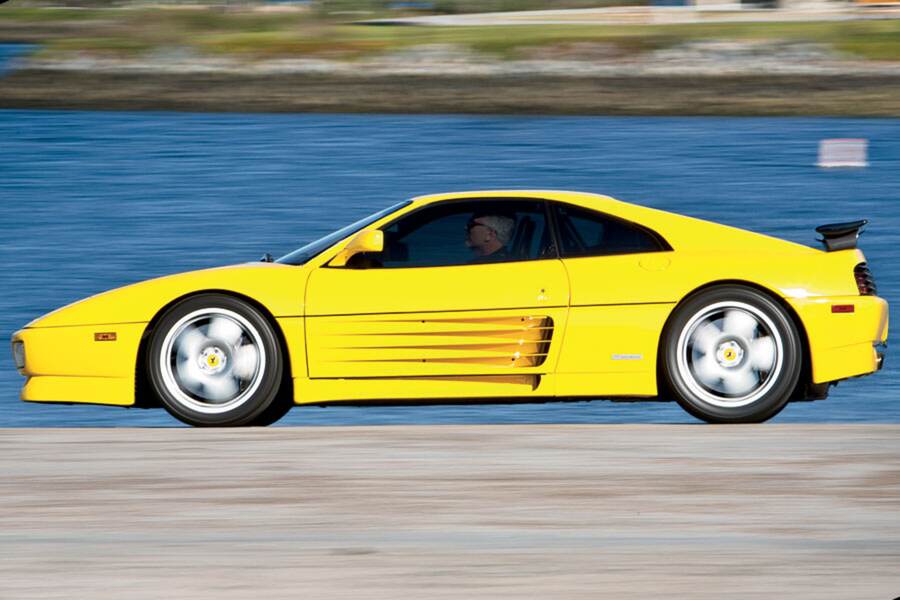 The intake manifold was carved from multiple blocks of aluminum and mated with a single, large plenum, rather than the stock engine’s two smaller pathways. Due to space constraints, Maxwell chose an air-to-water intercooler; it sits atop the engine. Engine management was based on an English-built DTA FAST system that incorporates traction control, wet-weather traction control, launch control, boost control, idle motor control, sequential injection and drivers for each individual coil. The dual airboxes were also designed by Maxwell, but while they’re stamped with the Ferrari name they contain elements from a Toyota Tundra.

Toyota? In the interest of parts robustness and availability, Maxwell sourced the fuel injectors (which were later modified to flow 725cc of fuel per minute), coil packs, air-conditioning compressor and alternator from the Japanese giant’s parts bin. On the other hand, Maxwell fabricated the wiring harness, assorted brackets and various covers in-house—but their appearance is factory perfect.

One of the biggest challenges would be cooling the engine. “We knew heat buildup would be a serious issue,” explained Maxwell. “We would need to increase the car’s cooling capability—water, oil and charge air—if we wanted it to stay alive for daily driving.” 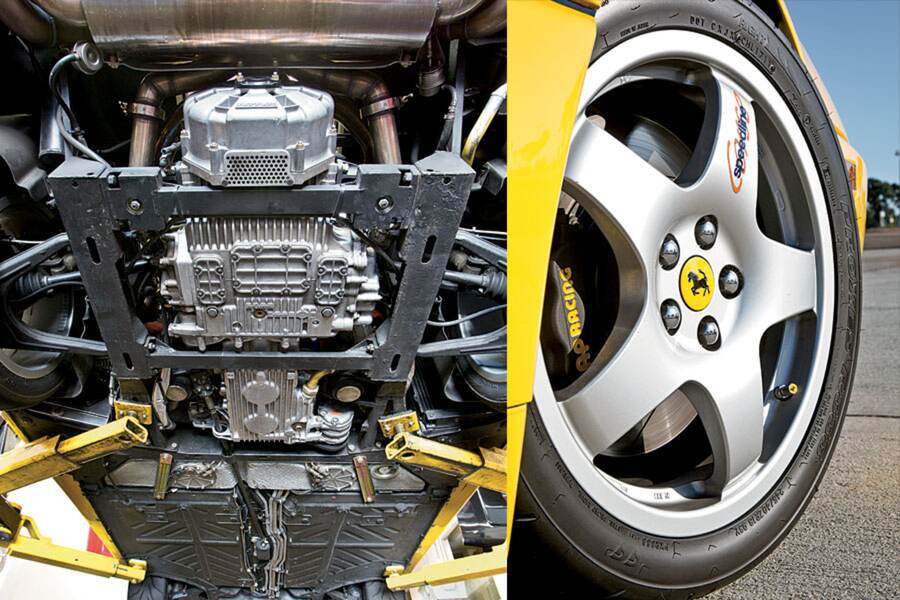 Maxwell sent off the front bumper to have the air-conditioning condenser inlet on the right side mirrored on the left side. When the bumper returned, he fabricated an aluminum duct to feed air from the new inlet across the intercooler’s radiator, which was mounted behind it. Maxwell also fabricated the intercooler’s water tank and pump mounts, and installed them under the front trunk liner, running hard aluminum lines back to the intercooler itself.

The exhaust manifolds and turbochargers were sent to ATP and fitted with thermal jackets. Maxwell and Slead initially tried wrapping these components in thermal tape, but the intense heat literally melted the stuff into glass. The high-tech blankets, despite glowing a dull red after even moderate use, reduce radiated heat by nearly 80 percent. High-flow electric fans forced cooling air over heat-soaked surfaces regardless of the speed, but, as they would learn during testing, even that wouldn’t be enough to cool the beast.

“We got to a point where everything was running perfect…almost,” Maxwell recalled. “The car would run great up to 150 mph. Between 155 mph and 165 mph, the temperature would spike to the point of overheating. At 166 mph, the temp became normal again.” 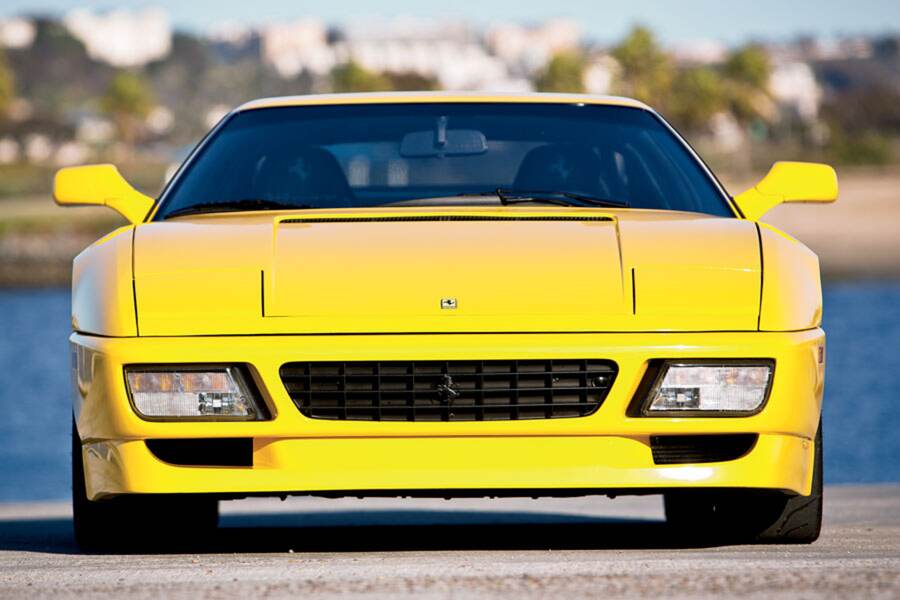 It turned out that the Ferrari’s water-pump impeller was experiencing cavitation issues at certain rpm—the coolant was literally pulling itself apart and foaming. Maxwell wound up designing a new impeller that has so far been effective up to the car’s gear-limited top speed of 192 mph. While he was at it, he also designed new, ultra-lightweight belt pulleys that further reduced rotating mass.

The engine’s dry-sump oiling system was upgraded with a more efficient accumulator pump and F355 Challenge oil coolers. Maxwell further developed an anti-reversion valve system, all in the name of keeping the oil and oil pressure where they needed to be, regardless of the situation.

THE ENGINE, WHILE A MAJOR PROJECT IN ITS OWN RIGHT, was only one part of the whole; there was far more to come. A crashed F355 Challenge surrendered its gearbox and suspension to the 348, and while Maxwell and Slead thought the transplant would be an easy, bolt-on affair, it was not. 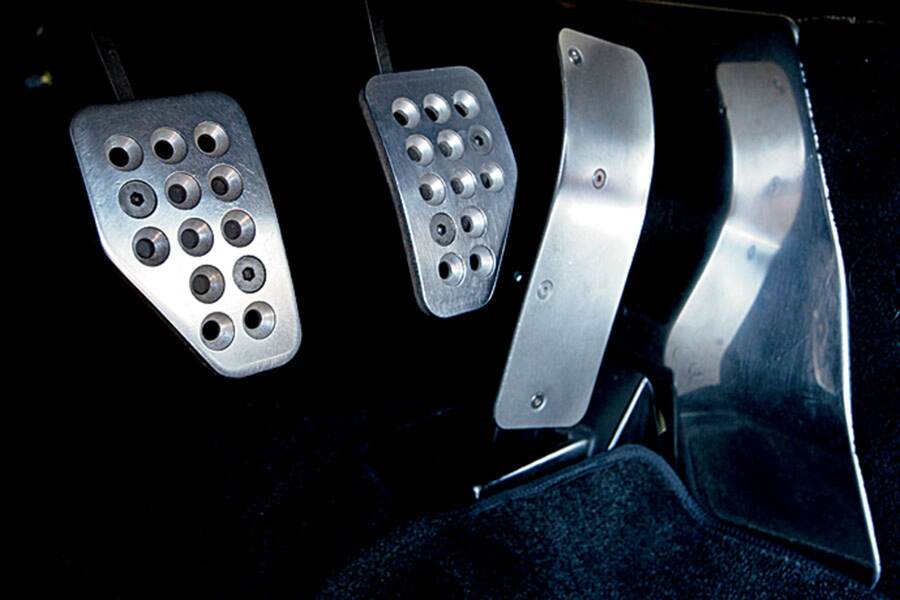 “This was perhaps the toughest part of the entire project,” said Maxwell. “I had to make new crossmembers and machine arms for the gearbox mount. Then I had to cut a hole in the frame and put in a tube for the shift rod to go through. Most of the mounts and brackets had to be redesigned. It was quite a challenge.”

The Ferrari’s binders are based on AP Racing’s six-piston calipers, which grip 14.3-inch steel rotors at all four corners. (The car also includes a proper handbrake.) Forged Speedline wheels measure 8×18 inches in front and 12×18 inches out back, and wear 245/40-18 and 305/35-18 Toyo Proxes rubber.

Like the exterior, the interior of this 348 looks like something Ferrari itself might have produced. The seats, for example, are carbon-Kevlar 348 Challenge units covered in leather instead of the original fireproof fabric. The roll cage is stock 348 Challenge, while the dash, steering wheel, door panels and center console are all standard-issue road car. Mostly, anyway.

Eagle-eyed 348 aficionados will quickly spot the gated shifter’s six, rather than five, forward speeds—one benefit of the F355 ’box, along with better ratios and a stronger, race-spec clutch—as well as a pair of new gauges (for exhaust-gas temperature and turbo boost pressure) and a complement of additional buttons in the center console. The engine-start button, sourced from a Honda S2000, is the most obvious, but the other ones, mounted between the seats, are much more interesting. Need more power? Push a button to get an instant 17 psi of boost. (The engine is reportedly capable of running this boost level full-time, but tire life suffers dramatically.) Trying to sneak into the driveway late at night undetected? Push a button and the exhaust goes into stealth mode. Want to disable the traction control or enable launch control? Push the buttons. Despite all the extra controls, the install looks factory; the additional buttons are repurposed 348 items, while the new gauges glow dull amber just like the originals.

The car’s exterior also features factory road-and-race inspiration. The bodywork remains stock street car aside from the lightly modified front bumper and carbon-fiber F355 Challenge rear wing. And while they’re not identical to the 348 Challenge items, the wheels look very similar. To the general population, this is just a garden variety Ferrari 348—and that’s just the way Slead and Maxwell wanted it.

SO DOES SLEAD’S “348 Challenge Biturbo” go as good as it looks? During my brief test drive, I discovered the Ferrari felt nicely sorted in the corners and under braking, but it was the engine I’ll really remember. While I had a bit of initial difficulty squeezing into the race buckets, a quick stomp on the throttle pushed me fully into place. The car’s acceleration feels like being fired from God’s own slingshot; a few runs to 150 mph were dispatched far more quickly than in anything I’ve driven in recent, and not-so-recent, memory, including tuned, twin-turbo Porsche 911s.

Better still, unlike old-school turbo systems that plodded along like a half-dead Vespa until the boost kicked in, and all hell abruptly broke loose, these turbos spooled up incredibly quickly. Ultimately, this 348 felt like a normally aspirated Ferrari of much larger displacement.

That’s an understatement. In truth, that kind of speed and power puts this 348 solidly into the upper echelon of today’s extreme sports cars from the likes of Ferrari and Lamborghini, and nipping at the heels of fanciful exotics with names like Koenigsegg, Bugatti and Pagani, not to mention the just-revealed LaFerrari.

Purists, beware. I think Enzo would be proud. 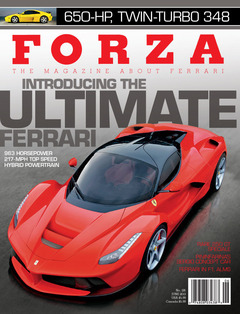