The F12 is the most powerful road-going Ferrari yet. And it’s even faster than you’d expect. 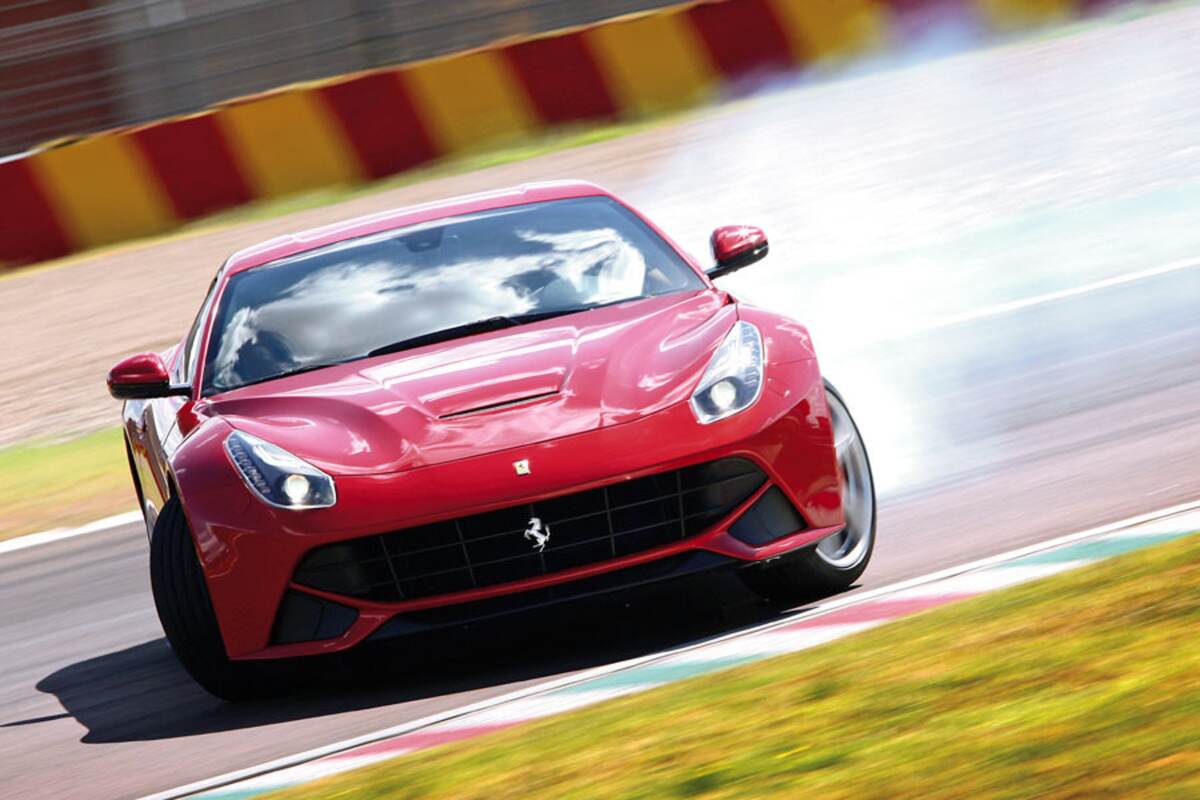 There are three things you need to know about the new F12 Berlinetta. First, it’s equipped with a naturally aspirated 6.3-liter V12 that pumps out a staggering 740 horsepower. Second, thanks to that mighty engine, a dual-clutch seven-speed gearbox and a host of go-fast electronics, the F12 will sprint from 0-124 mph in just 8.5 seconds. Third, the car accelerates so quickly above 100 mph that it can give you tunnel vision.

The first time I experience the manic surge of power that builds from around 6,000 rpm, I’m so startled I laugh out loud; it feels like the F12 has broken free of the earth’s gravitational pull. I also find myself flying into the next turn far faster than expected, suddenly somewhere north of 120 mph, and have to stomp on the brake pedal before I shoot off the road.

The next straight is longer, so I’m able to let the F12 run free. When I shift up to fourth at the engine’s 8,700-rpm redline, the car stays in its frantic upper powerband and seems to accelerate even harder. The sensation reminds me more than a little of the 900-hp, track-only FXX, and I run out of both road and guts before I have the chance to select fifth. 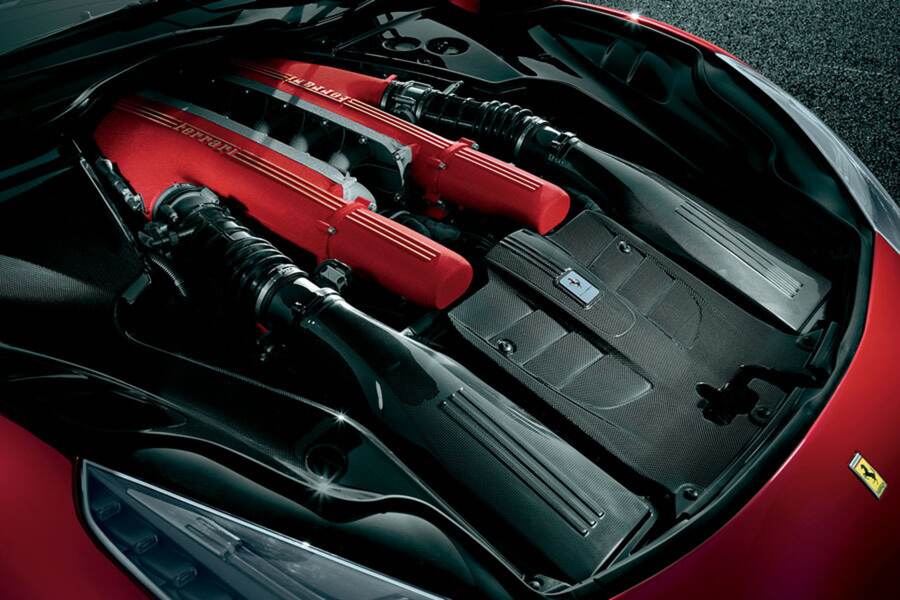 This isn’t to say that the F12’s engine is a one-trick pony. Far from it. The V12 is actually very flexible—80 percent of its 509 lb-ft of torque is available from 2,500 rpm, and the engine is happy to be lugged even lower—and generally offers very linear power delivery. But something wonderful happens way up there in the rev range, where the Ferrari’s sheer power overcomes its mass, and the resulting rush of 740 stampeding horses transforms the F12 from a car my grandmother could drive into a full-on supercar.

ON THE OTHER HAND, the F12 certainly doesn’t look like a supercar, let alone one that’s a full two seconds a lap faster around the Fiorano test track than an Enzo (Maranello’s last pukka supercar). Instead, it is an update on Ferrari’s classic front-engine, two-seat berlinetta theme. Compared to the relatively bulbous 599 GTB Fiorano it replaces, the F12 is 1.8 inches shorter, 2.5 inches lower and just under an inch narrower—and it seems even smaller.

Better still, the F12 is drop-dead gorgeous. The sloping hatch and lack of a rear deck visually pull the cabin back, accentuating both the long hood and the car’s sleekness. Lowering the roofline and reducing the gap between the top of the tires and the wheel arches has dramatically improved the F12’s stance vis-a-vis the 599, making the new car instantly appear more sporting than its predecessor. The aerodynamic channels that run down the sides of the body blend harmoniously with the flowing surfaces above, as does the abrupt Kamm tail. If the angular, Formula 1-inspired front fascia seems at odds with the smooth curves found elsewhere, and contains too much black plastic, it certainly don’t detract from this Ferrari’s overall beauty. 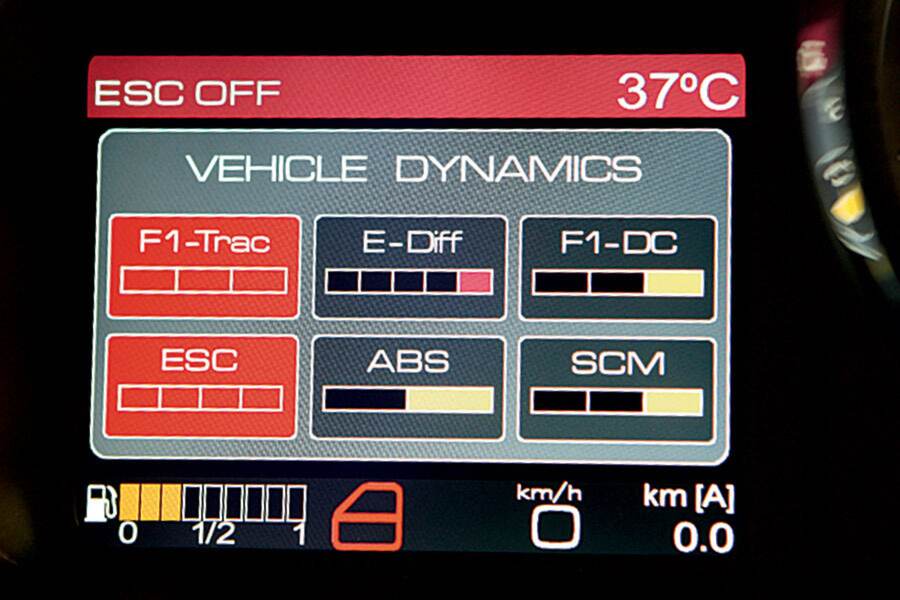 The F12’s cockpit merges a number of elements from the FF and the 458. Like its two siblings, the F12 features Ferrari’s new-school steering wheel (which wears everything from the engine’s Start button and the manettino to the turn signals and windshield-wiper controls) and a large, centrally mounted tachometer flanked by two video screens. The dashboard air vents are round, as on the FF, while the lack of an infotainment screen in the center of the dash is pure 458.

This mix of sport and GT themes continues throughout the cabin. For example, the seats are firm, like the 458’s, but their design, along with that of the door panels (and the aluminum door pulls, which are slickly half-wrapped in leather) is sophisticated and luxurious, more like the FF. Overall, it’s a gorgeous and ergonomically sound combination. The F12’s cockpit looks like a wonderful place to spend a day.

That initial impression is supported by the Ferrari’s around-town manners. The dual-clutch gearbox shuffles smoothly between gears, the engine’s torque propels the car effortlessly from stoplight to stoplight and the ride quality, with the Rough Road shock-absorber setting selected, approaches pillow soft. With the revs low, the engine is almost inaudible. The fast and light steering makes for easy maneuverability in tight spots. 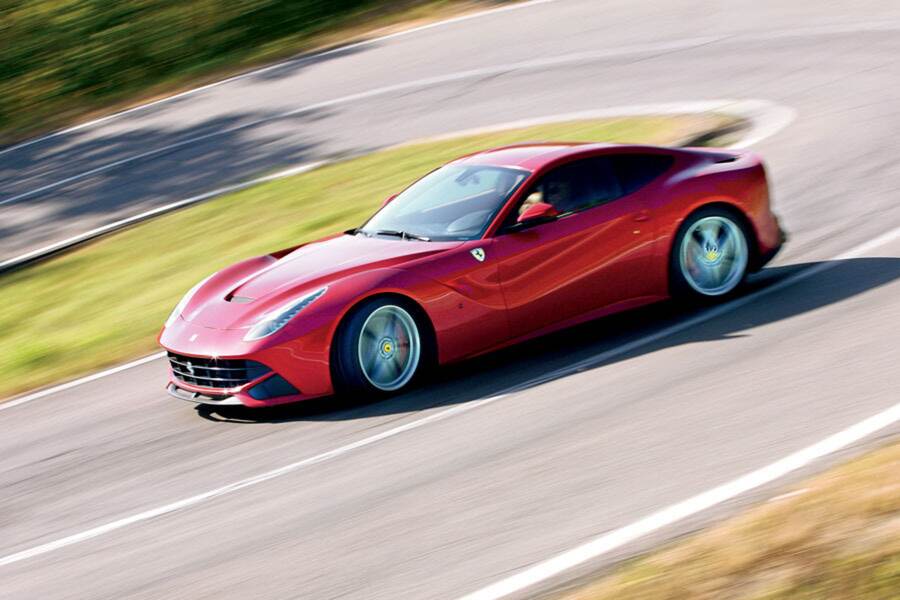 The F12’s demeanor is much the same on the highway, where it proves to be an impressively quiet cruiser. But while it can easily handle the daily grind, there’s another, more compelling side to this Ferrari’s personality.

ACCORDING TO RAFFAELE DI SIMONE, Ferrari’s chief test driver, the F12 needed 740 horsepower because the FF had raised the game. “In dry conditions, the FF is doing the same job the 599 did,” he tells me

as we inspect a line of F12s parked inside the factory complex. “And so the F12 is not doing what the 599 was doing with just an upgrade; it is much more extreme in the range of sportiness. We try to produce different cars, so you should find a different type of calibration and intent [from both 599 and FF].” 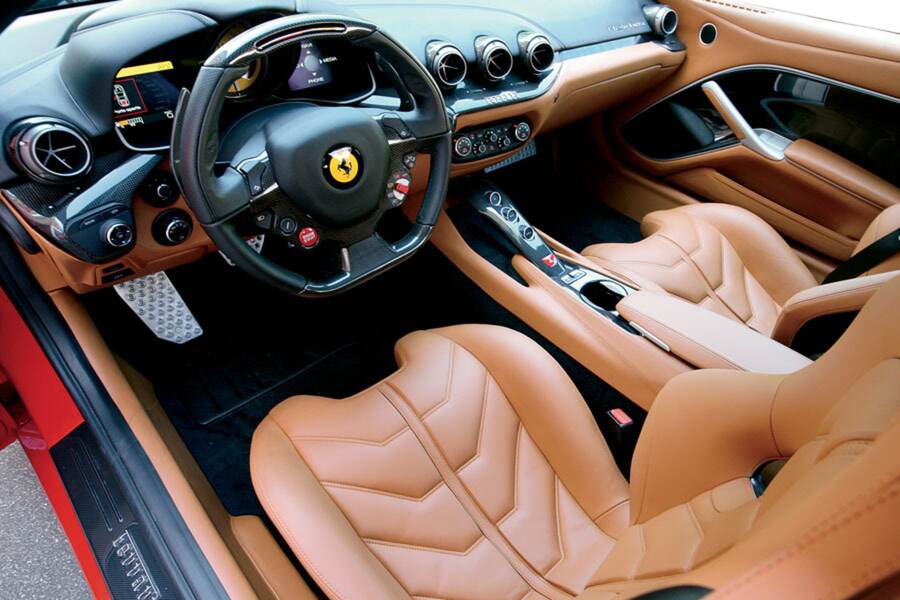 More power wasn’t the only change Ferrari had in mind, of course. In addition to being smaller than the 599, the F12 is lighter, by roughly 155 pounds. About 110 of those pounds have been lost from the use of an all-new aluminum spaceframe, which features a variety of new castings, extrusions and alloys.

The F12’s spaceframe is about 20-percent stiffer than the 599’s, and also features better weight distribution. By pushing the front-mounted engine further down and even further behind the front axle, Ferrari moved the F12’s balance to 46-percent front/54-percent rear, versus the 599’s 47/53. This, plus the new car’s 25mm-lower center of gravity and a slew of other upgrades, including 100-percent stiffer mounting points for the suspension members, gives the F12, says di Simone, “behavior that is closer to the 458 than 599.”

When asked if 740 horsepower is too much for a road car, di Simone, who clearly operates at different level than me, is nonchalant. “Sometimes it’s easier with more power to manage the car over the limit,” he says, completely seriously. “But the power goes together with the chance of putting it to the ground. If you have traction and stability and balance, then it’s easier, everything is easier. I think the key point in this question is the electronic differential. It is 740 horsepower, but it can be controlled, first through the electronic differential and then by the traction control. You never have a problem of traction.” 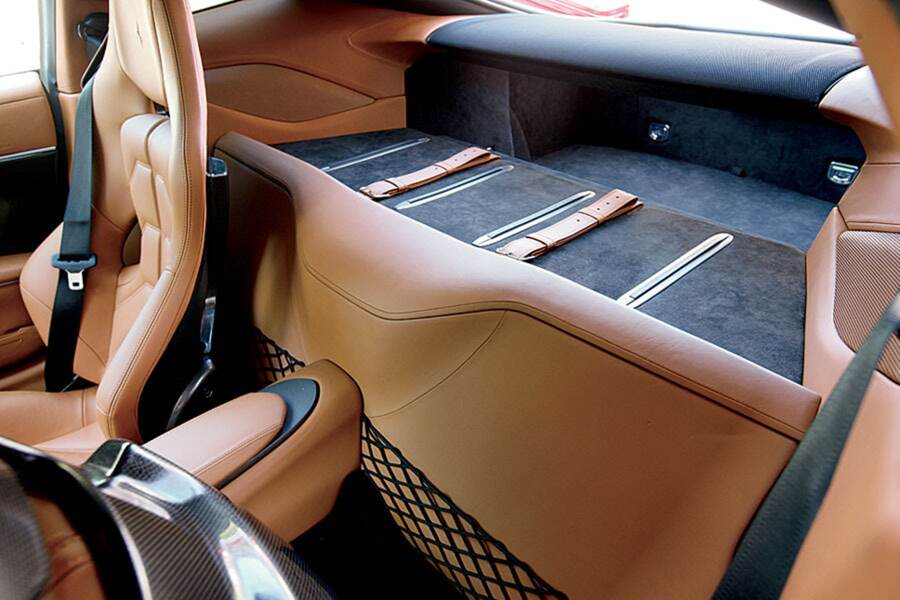 It doesn’t take long on the road to confirm that he’s absolutely right. Under full throttle in a straight line, I can feel the F12’s rear end start to twitch ever-so-slightly to the right, but it never actually breaks free. Stomping on the throttle at the apex of a turn sets off the traction-control light in the instrument panel, but that’s about it: There’s no intrusive, after-the-fact throttle or brake intervention. Instead, the F12 simply feeds in the power as traction allows, and roars out of turns as if shot from a canon.

The Ferrari’s smoothness and sophistication at putting its prodigious power to the pavement is extraordinary, as is the way it dispatches bumps. While I don’t have a chance to explore the F12’s limits on a smooth, wide-open racetrack, I’m treated to all manner of broken and patched pavement on the narrow country roads surrounding Maranello—and the Ferrari simply absorbs them, whether I’m accelerating, braking or turning. Credit the new-specification SCM-E magnetorheological shock absorbers, which feature a new ECU and dual energizing coils for faster and more precise responses than before.

The new shocks also play a significant role in the car’s impressive cornering prowess. The F12 is fantastically precise and easy to toss around, shrinking around me far more than the 599 ever did. The quick steering means that little movement of the wheel is required in most situations, and what little body roll can be felt doesn’t impact the car’s balance. The Ferrari understeers in slower corners, but stepping on the throttle snaps the nose back into line. 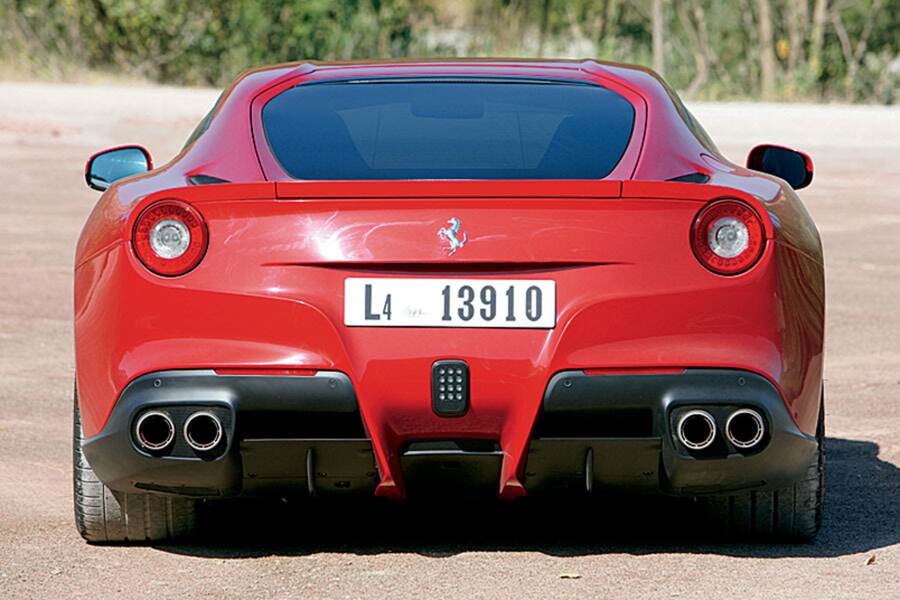 All of this adds up to a relatively large, extremely powerful car that drives like a much smaller, lighter one. Before driving the F12, I never would have guessed that it could deliver the goods on tight and twisting country roads. But after only a few corners my heart begins to pound in my chest as I push harder and harder, dancing on the pedals, cranking the wheel and tugging the paddleshifters, which respond instantly and seamlessly. The engine’s deep baritone howl rises and falls as the corners come and go, the exhaust crackling maniacally on downshifts. And whenever the road opens enough to let the V12 soar past the magic 6,000-rpm mark, it’s hard not to start laughing all over again.

WITH THE LAUNCH OF THE F12 BERLINETTA, Ferrari has completed the next-generation revamp that began in 2008 with the debut of the California. This was followed by the introduction of the 458 Italia in 2009, then the FF in 2011. Those last two models represented massive performance improvements compared to their predecessors (the F430 and 612 Scaglietti, respectively), and the F12 is equally far removed from the 599.

It’s difficult not to be awed with what Ferrari has accomplished with its newest model. On the one hand, it is completely relaxed when cruising down the highway or puttering around town; on the other, it tears through the Maranello countryside with a speed and poise that are scarcely believeable. My only real criticism—which is both wholly subjective and a minority opinion—is that I don’t think the F12 is really a sports car like Ferrari claims. 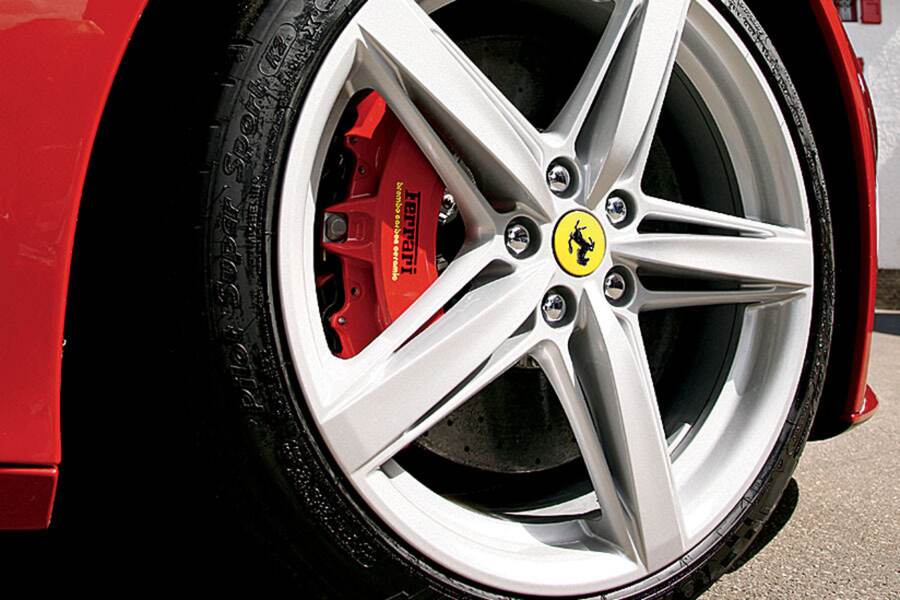 Maranello divides its model lineup into sports cars and GTs. The California and FF are GTs; the 458 and F12 are sports cars. There’s no question that the F12 is a far, far more sporting machine than the FF, but, to my hard-core-sports-car-loving self, the F12 just can’t compare to the 458. The smaller, lighter, more rear-weight-biased Italia’s almost-supernatural responses, glue-like grip and hang-off-the-seatbelt braking capability reveal the F12 to be more of an extraordinarily capable, supercar-fast GT.

Obviously, that’s no bad thing: The F12 truly does it all. But fair warning to those potential buyers who are looking for the 458 experience in a larger package; you’ll want to wait for an HGTE version or a full-blown GTO-style variant, both of which we’ll likely see in the next few years.

Just about everyone else will view the F12 Berlinetta as practically perfect, and with good reason. Simply put, it is the best all-around, extreme-performance car Ferrari has ever built. 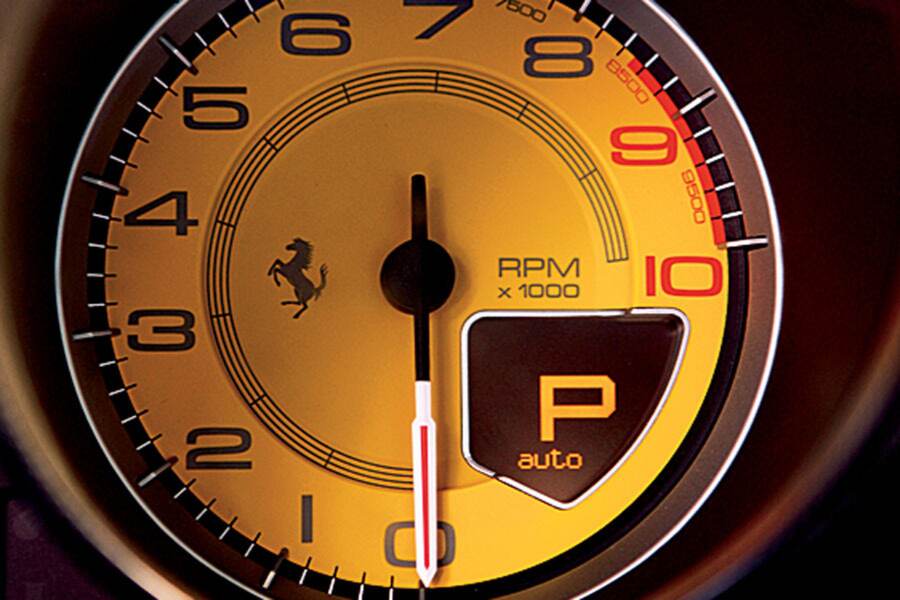 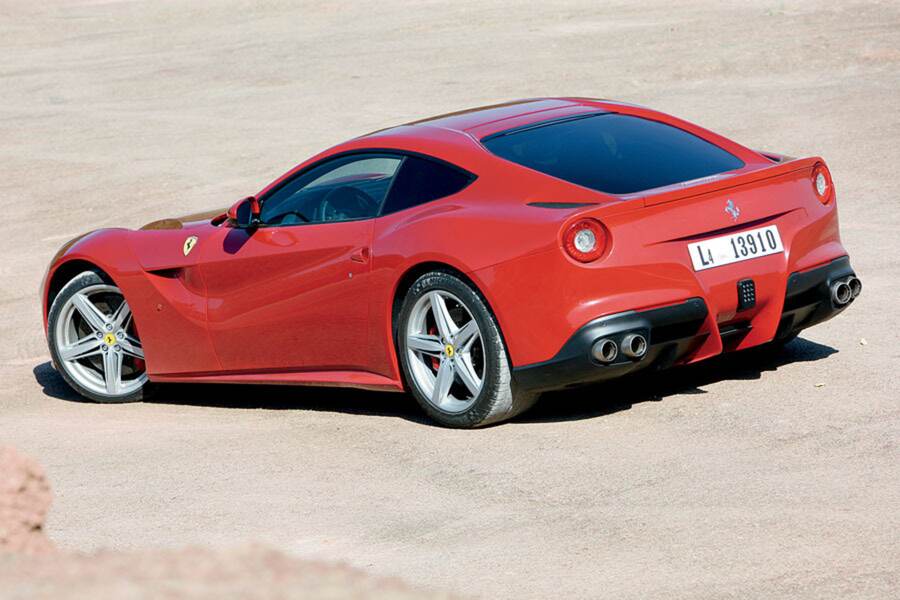 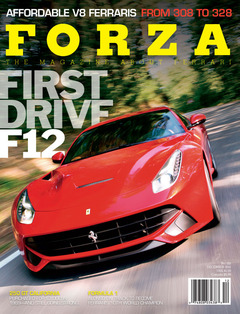