Enzo Ferrari, Gioacchino Colombo and Carlo Felice Anderloni all contributed to the magic of the 166 MM Berlinetta. 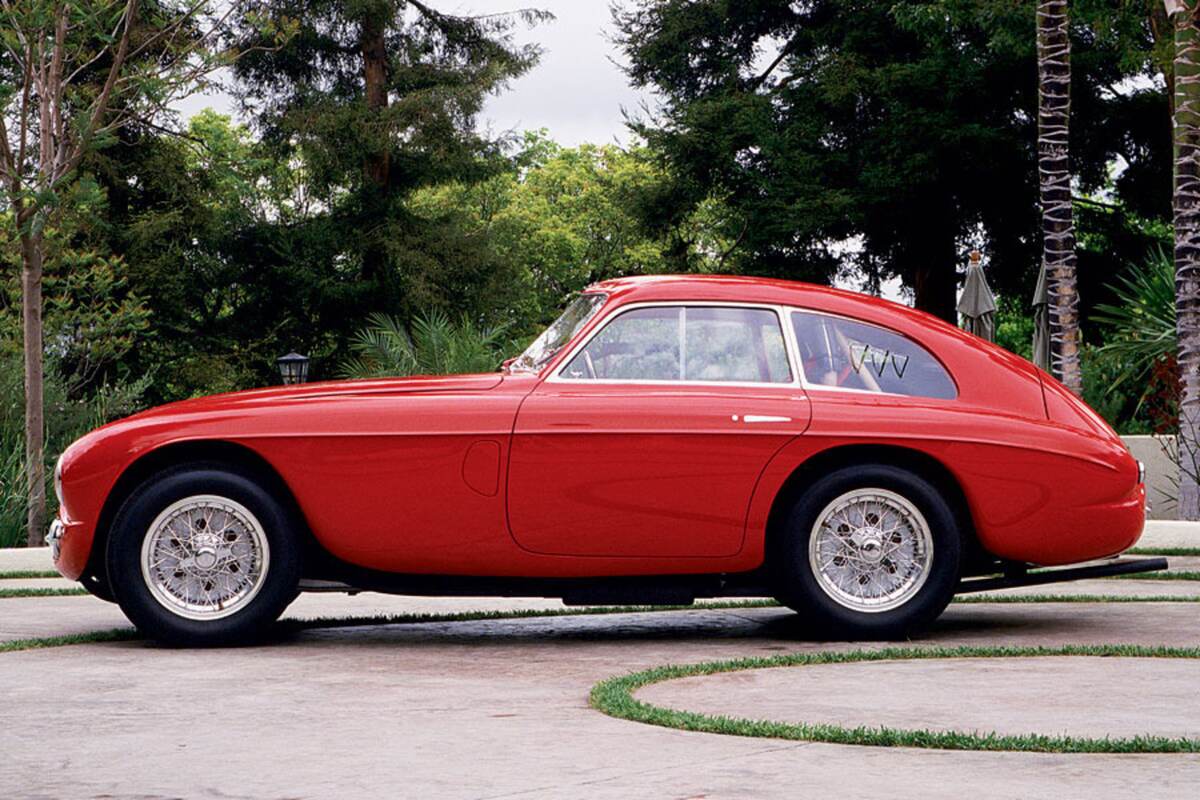 When the discussion turns to Touring-bodied 166s, the car that invariably comes to mind is the legendary 166 MM Barchetta. But in 1949 and ’50, Touring also bodied six 166s as Berlinettas, which are more handsome, more purposeful and much rarer than their open siblings. Yet, six-plus decades after it was born, this particular example (s/n 0066M) is still being driven the way its creators intended.

The 166 Berlinetta (and Barchetta) was the product of Enzo Ferrari’s long-term relationship with Carlo Felice Anderloni, owner of Carrozzeria Touring. It began before World War II, when Scuderia Ferrari raced Touring-bodied Alfa Romeos in the 1930s. In 1940, Touring built the coachwork for Ferrari’s first car, the Auto Avio Costruzioni 815 that ran in that year’s Mille Miglia. Then, after the war, Enzo called upon Anderloni to build the bodywork for many of his eponymous machines.

The reason Ferrari used Touring was most likely the latter’s innovative Superleggera (“superlight”) body system, which was invented by Anderloni in 1937. The Superleggera setup comprised a lightweight aluminum-covered tubular-steel sub-skeleton. This was similar in concept to the then widely used Weymann system, which featured a wooden frame covered by leatherette, except that the Superleggera’s aluminum skin could be shaped where the Weymann’s leatherette skin could not. 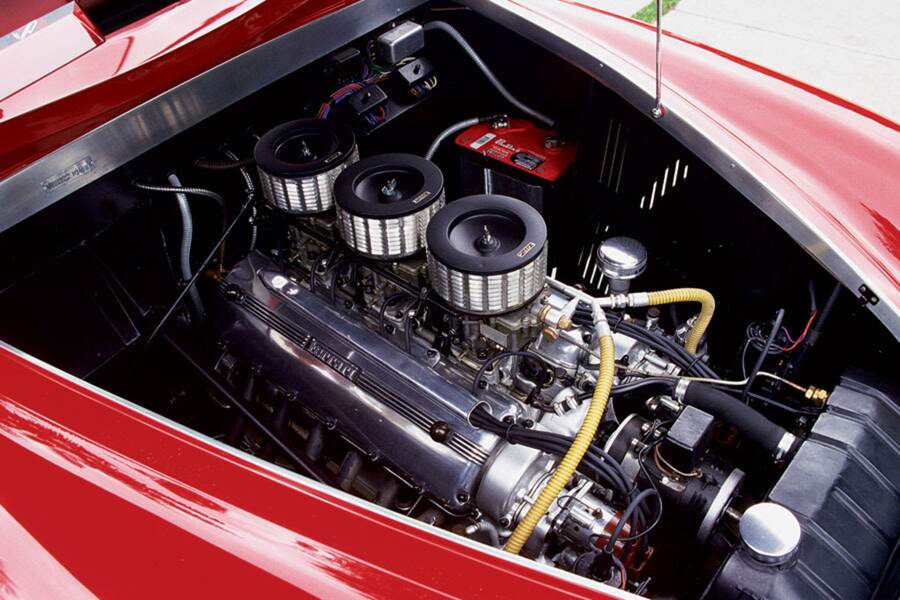 Touring’s craftsmen built up the lightweight steel skeleton from small-diameter tubing, which was first shaped on jigs and then gas welded. This structure was then fastened to the chassis, and the shaped aluminum skin was attached. There was some attempt to separate the dissimilar metals with felt pads to avoid galvanic corrosion, although, as later owners and restorers would discover, these efforts were not always successful.

The 166s featured ladder-type frames with an X-member built by Gilco, a prolific supplier of Ferrari chassis. Suspension was independent in front with a transverse leaf spring. Rear suspension consisted of a live axle with leaf springs, a Ferrari convention that would continue for more than a decade. Ferrari chief engineer Gioacchino Colombo designed the lever-type hydraulic dampers that were used on all four corners. Large drum brakes were fitted both front and rear and provided excellent stopping power, a factor that kept Ferrari from switching to disc brakes until well into the 1950s.

The 166 engine was Colombo’s famous 60-degree SOHC 24-valve V12, which had been first issued in 1947 in 1.5-liter form as the Type 125. (The 125’s 55.0mm bore and 52.5mm stroke worked out to 124.73 cubic centimeters displacement for one cylinder, hence the 125 designation; this is how all the early Ferrari V12 models were named.) In 166 guise, the V12’s bore and stroke grew to 60.0mm x 58.8mm, giving a cylinder volume of 166.25cc and a total engine displacement of 2 liters, good for 140 horsepower in competition guise. This power was sent to the rear wheels through a five-speed transmission, in which fourth gear was direct and fifth a slight overdrive. 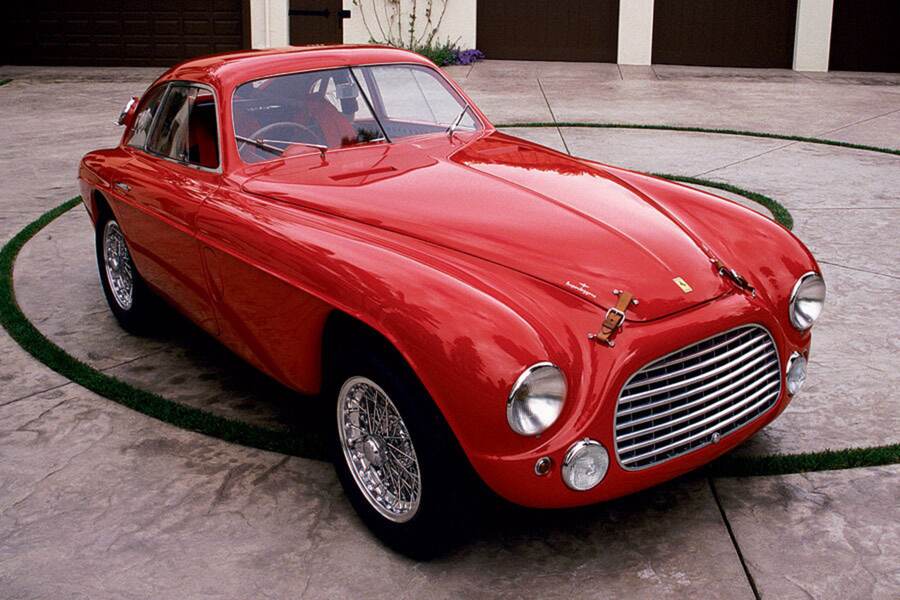 The Ferrari 166 was introduced at the Turin Salon in September 1948, and various versions were built into the early 1950s. In total, 33 or 34 166 MMs were produced, most of which were Barchettas, but six were Berlinettas. One of the latter (s/n 0062M) wore a Vignale body, while the other five were Touring’s “Le Mans Berlinettas,” so named to commemorate Ferrari’s 1949 victory in that 24-hour race. (Somewhat ironically, the winning car was a Barchetta.) The Touring-bodied Berlinettas carry serial numbers 0026M, 0042M, 0048M, 0060M and 0066M.

The sixth Touring Berlinetta body was mounted on a shortened Spyder Corsa chassis, which had s/n 020I stamped over the original s/n 02C. Some historians include this car in the count to come up with a total of seven 166 MM Berlinettas.

While the Touring Barchetta was in large part responsible for establishing Ferrari’s legend—winning, among other things, the Targa Florio, Le Mans and the 24-hour race at Spa-Francochamps in 1949—the Touring Berlinettas also enjoyed racing success. Most famously, Giannino Marzotto drove his Berlinetta to victory in the 1950 Mille Miglia, ahead of Dorino Serafini’s second-place Barchetta. Marzotto’s winning car was later displayed at the 1950 Turin show. 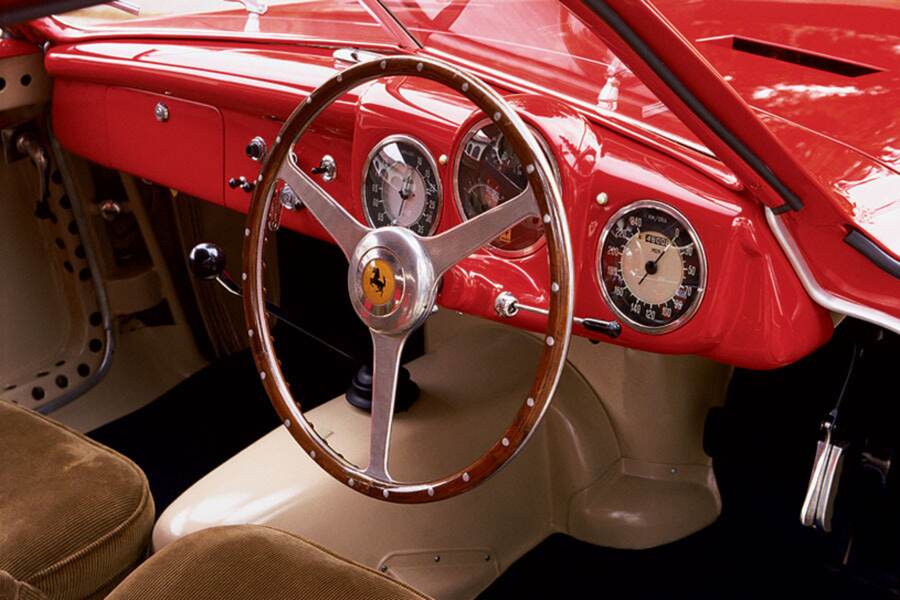 OUR FEATURE CAR, S/N 0066M, was finished on June 14, 1950. It was delivered to a Mr. A. Di Stefano of Milan on February 7, 1951; history does not record what the car did in the eight months after production. The Ferrari soon passed through the hands of two more Italian owners before landing with Anteo Allazetta of Trieste in May 1953.

In late 1958, Allazetta sold s/n 0066M to Chinetti Motors of New York City. Chinetti resold the Ferrari to David Francis Leopold, who in May 1959 passed it to George R. Smith of Cincinnati, Ohio. In 1961, Donald S. Williams purchased the car from Smith. Bob Booher of Ohio was the next owner, followed by Bernard Stayman of Michigan then Ralph Smith of Dayton, Ohio. When Smith went to Princeton to study for his PhD, he put the car in the hands of John Delamater for sale. Through Delamater, one of the founders of the Ferrari Club of America, the Berlinetta went to Fred and Sue Leydorf of Birmingham, Michigan. 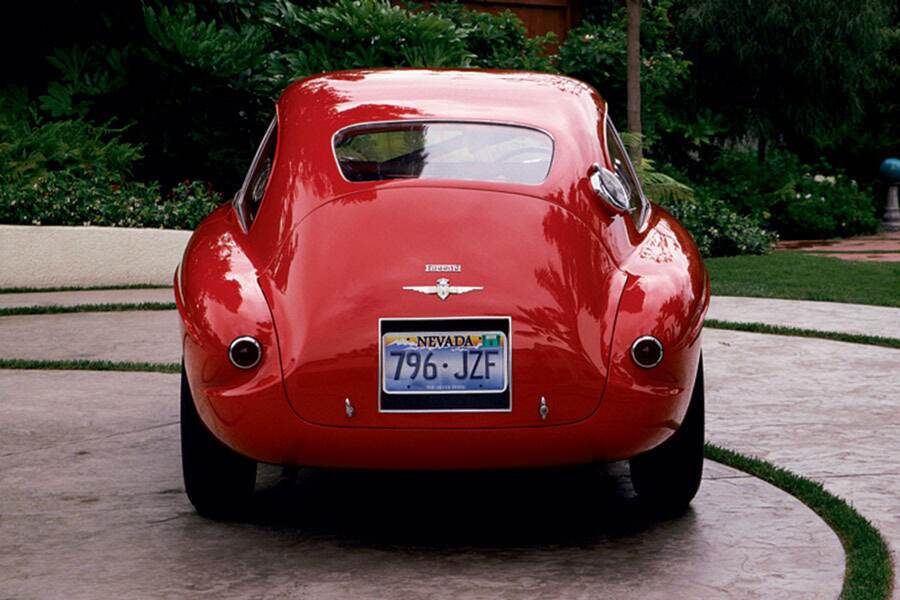 Fred Leydorf, an early member of the Ferrari Club of America, extensively refurbished the Ferrari between 1965 to ’67. The big restoration item was the engine, which had a pesky stuck valve that he could not fix. Leydorf went completely through the 2-liter V12 with the perfectionist eye of the meticulous engine-design engineer he was. He told the story of the two-year rebuilding process—or “re-manufacture,” as he called it—in the Fall 1975 issue of the FCA’s Prancing Horse magazine.

The job included new custom-made pistons with oversize piston pins and Moly rings; a reground crankshaft; custom-fitted spring retainers; reground rocker arms and reground and Tufftrided adjusters; camshafts reground by Crane Cams; and new Silchrome XB (steel) valve seats in place of the stock bronze material. The impression given in the story is that everything was done according to then-modern engine-building practices, and the result was a much more durable V12 than was possible in 1949.

Leydorf also reduced the venturi size of the carburetors to improve low-speed performance, and changed fifth gear to get an overall final-drive ratio of 3.9:1 instead of the previous 4.6:1; this gave him 20 mph per 1,000 rpm for more relaxed cruising. “I had to rebuild the transmission to replace first gear,” he said. “While I was at it, I noticed that there was space enough to change the fifth-gear ratio.” 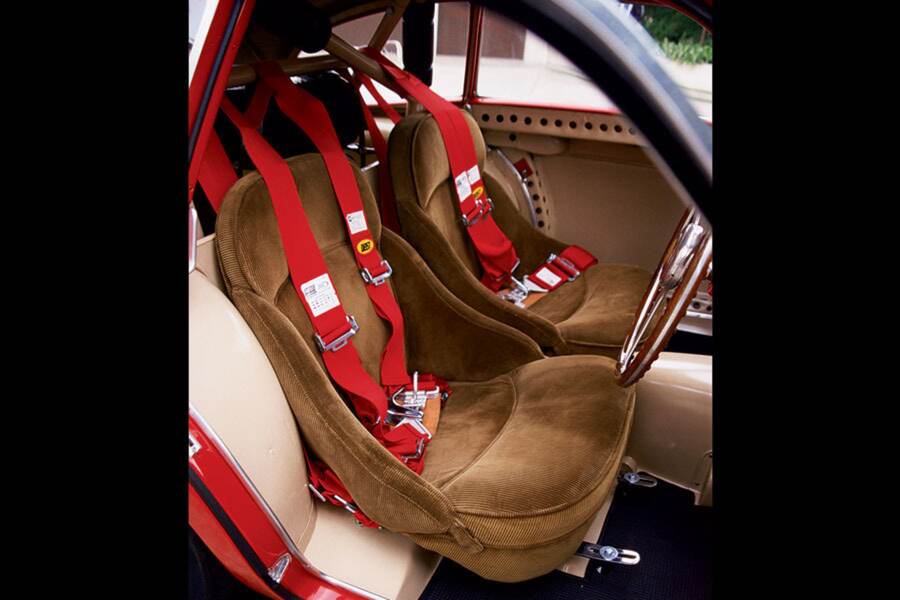 He also reported that the car had 400mm (15.75-inch) wheels, an odd size that required the use of Michelin X radial tires, as other brands were not readily available, at least when he owned the car.

The Leydorfs put 8,000 miles on the little Berlinetta during their ownership. During that time, Fred was director of the FCA Central States Region, so he and Sue drove the 166 to most of the regional events. Leydorf reported that the modified car was a practical tourer, comfortably cruising at 70 mph and 3,500 rpm. “I tried 80 mph at 4,000 rpm, but the engine was a little too busy,” he said.

There was plenty of room in the car, despite its short 88-inch wheelbase, and it had more than adequate luggage space. Climate control was practically non-existent, but the car’s fender vents brought in plenty of air during the summer—and during the cooler months, various gaps in the firewall admitted enough exhaust-manifold heat to maintain an adequate level of comfort. 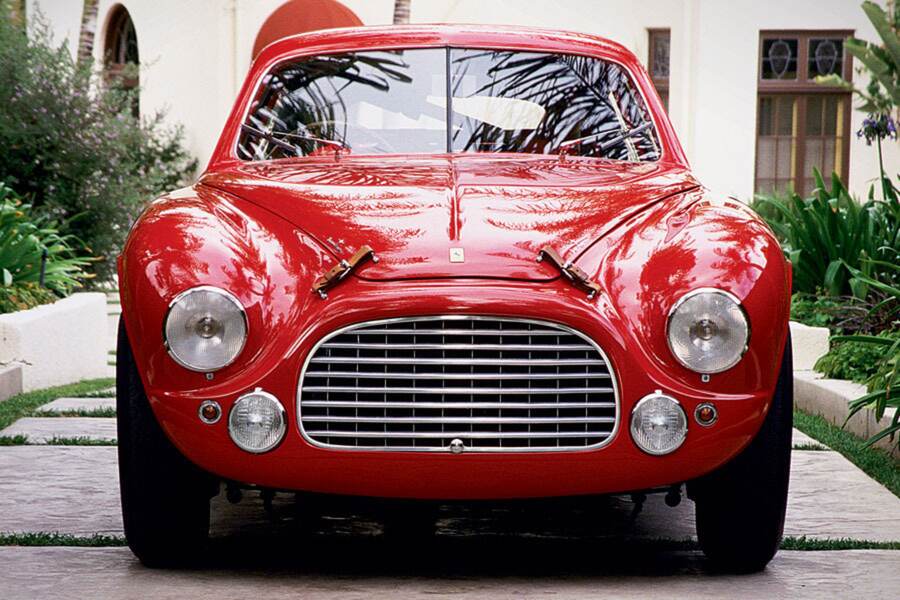 IN 1972, THE LEYDORFS SOLD THE CAR to John and Elaine Bond, founders of Road & Track magazine. Bond featured the car along with his 166 Barchetta in a Salon feature in the magazine, commenting that the engine in the Berlinetta “rebuilt by Leydorf, runs a little more quietly than the roadster.”

In 1984, the Bonds sold the car to Tohru Horinuchi of Japan, where it stayed until William E. “Chip” Connor of Hong Kong purchased it in 1999. Connor soon sent the Berlinetta to England, where Paul Lanzante performed a sympathetic four-year restoration.

In 2008, Connor entered the Berlinetta in the Gooding & Company auction at the Pebble Beach Concours d’Elegance, which is where current owner Michael Leventhal first saw it. 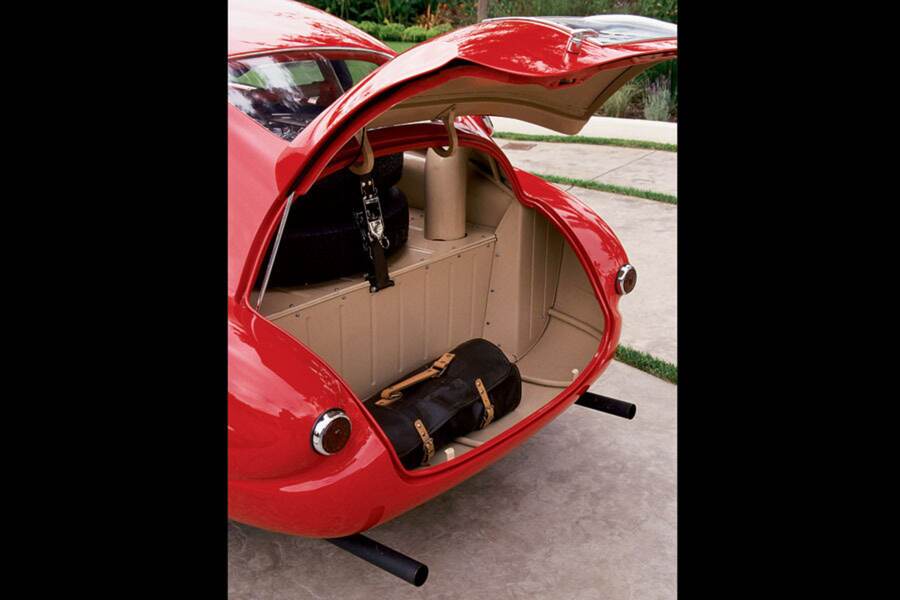 “I walked into the Gooding tent, saw the car sitting there on a platform and immediately fell in love with it,” recalls the Chicago resident. “I thought the 166 Barchetta was beautiful until I saw the Berlinetta. Its lines are so much more fluid.”

Leventhal was leery that the Berlinetta’s driving experience wouldn’t measure up to its appearance. “But then I drove the car, really early on the morning of the auction around the Pebble Beach area, and was blown away,” he says. “It was a real race car. It has a crash ’box, but an extraordinary one, and a screaming V12 engine.” That evening, with longtime friend Connor sitting next to him, Leventhal bought the car at the auction.

Since that time, Leventhal and wife Katharina (who own several other early Ferraris, including a 340 MM Vignale Spyder, a 500 Mondial and a 250 GT Tour de France) have driven s/n 0066 around 3,000 miles in various events, the biggest one being the Colorado Grand. “We’ve been on that event a number of times, but it was really extraordinary in the Berlinetta,” he says. “We never needed our chase car, and even at 8,000 or 10,000 feet the Ferrari never missed a beat. In the bigger cars, like the 340, we lose power at higher elevations because of all the carburetion, but the 166 was just amazing up there. One day, when we were running late, we screamed along at 120 mph for an hour or more straight. And for an early car, the handling is amazing. The tracking is spectacular—the car just goes where you point it—the turning radius is very small and the large drum brakes really work.”

Leventhal showed the 166 at Amelia Island in 2009, but he’s more interested in driving than displaying. “Right now the car is being prepped for the 2012 Louis Vuitton tour,” he says. “We’ll drive it from Monaco through the Alps to Venice. We can’t wait, that should be a really special trip.”

It’s unlikely anyone involved with the creation of the 166 expected these machines would still exist, let alone be running around, so many years later, but the legend cars like this created shows no signs of diminishing. As a result, enthusiasts today and in generations to come will have the opportunity to be able to see and hear these fabulous artifacts of a time gone by. 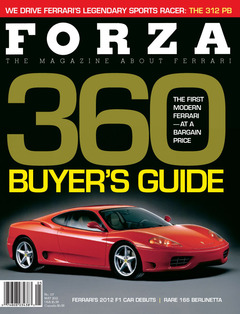