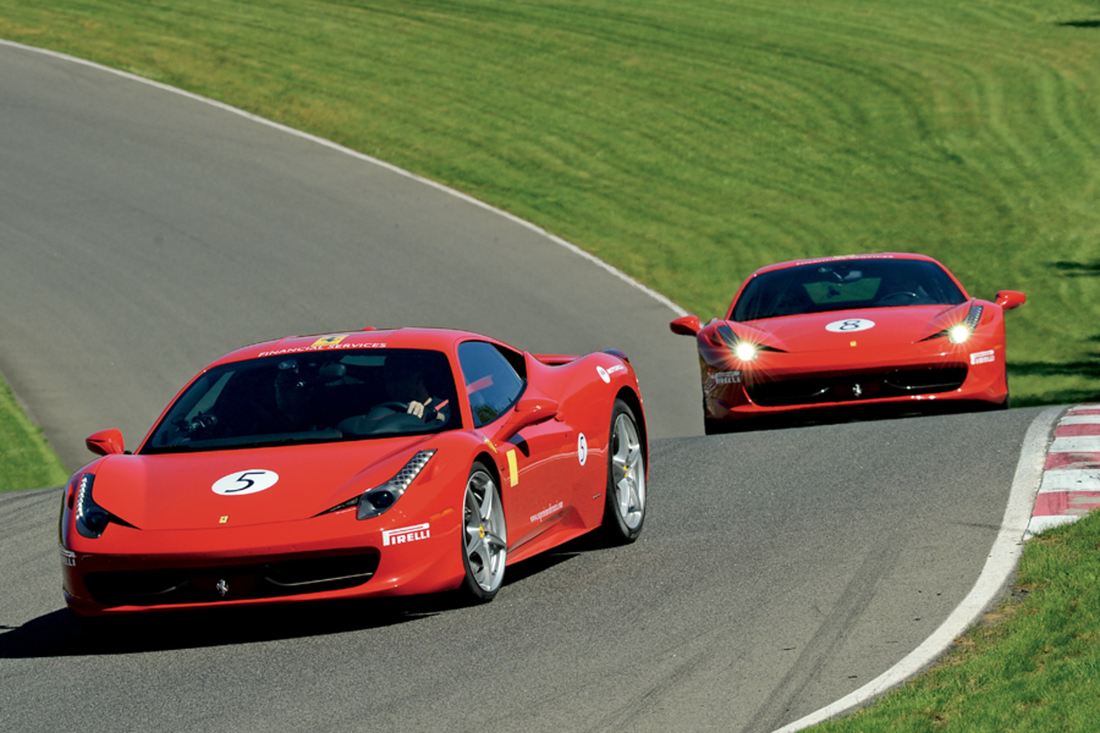 YOU’D EXPECT THE FERRARI DRIVING EXPERIENCE to be different from most other driving schools, and in at least three ways it is. First, you have to be a Ferrari customer to sign up. Second, the school uses Ferrari 458 Italias, Californias and 599 HGTEs. Third, it’s held at the Mont-Tremblant racetrack in Quebec, Canada.

Those last two factors are pretty impressive, especially when you clip the apex at the top of the completely blind hill that’s Turn 2 with a 570-horsepower 4.5-liter V8 engine howling away behind you. The track drops away abruptly but I keep my foot flat on the floor, taking the slight right through Turn 3 at well over 100 mph before getting hard on the carbon-ceramic brakes for Turn 4. A single tug on the left-hand shift paddle drops the seven-speed dual-clutch gearbox into third with an automated blat from the engine. I turn in, then wait-wait-wait until the car lines up with the rumble strips. A quick burst of throttle, a tap on the brakes, then I crank the steering wheel for Turn 5 and put the loud pedal down.

There’s an identical 458 directly in front of me, and it’s easy to imagine that we’re racing. We are, after all, flat-out down this short straight, just a couple of car lengths apart. It carries more speed into the fast left-hand Turn 6, but I claw back a few feet as we head toward the awesome off-camber, decreasing radius, downhill Turn 7. I want to catch up. Badly.

But then the Ferrari ahead brakes early—very early—spoiling the racing illusion. Its purpose is to show me the line, give me a measured taste of the 458’s performance and, just as important, keep me from bending the Ferrari’s aluminum skin or worse. It’s all folly, anyway; the pilot of that car, Anthony Lazzaro, a real racing driver who’s probably best known to FORZA readers for his time behind the wheel of a Ferrari 360 GT in the American Le Mans Series, would have to be driving one of the school’s rented vans for me to catch him. There are about a half-dozen instructors of varying backgrounds on hand, but suffice to say they’re all racers and they’re all fast. 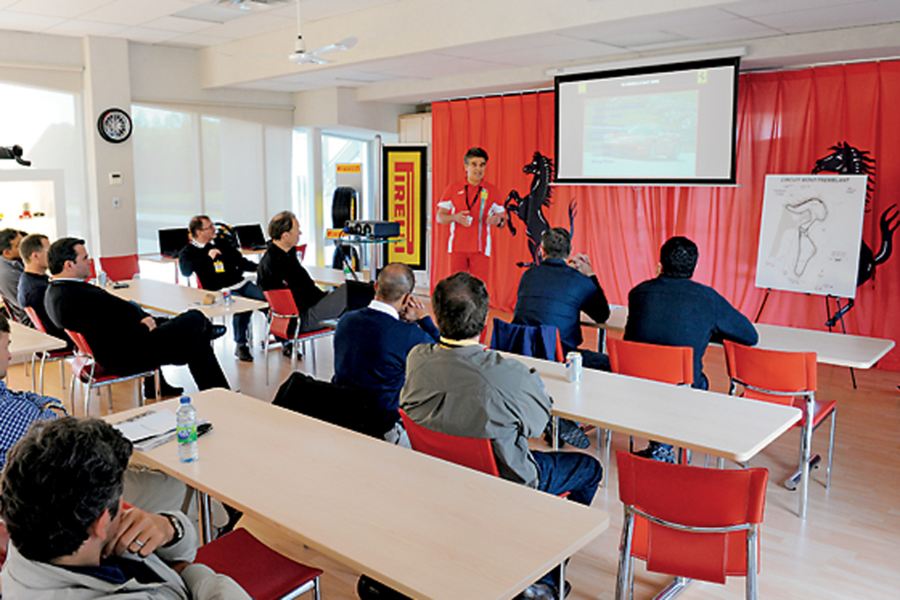 WHILE IT’S HELD ON A RACETRACK, the Ferrari Driving Experience is not where you go to learn how to minimize your lap times or work on the fine art of overtaking under braking—far from it. Instead, the goal of the school is to develop a driver’s confidence and increase his or her car-control skills, thus narrowing the gap between the driver’s ability and the car’s capability.

There are a couple of reasons a racetrack is the perfect venue for this exercise. First, it’s predictable and repeatable, with no traffic coming in the other direction and the chance to run through the same series of corners over and over again. Second, and closely related, is the ease of going fast in relative safety. Public roads typically don’t have the space or sightlines to reveal just how mind-numbingly fast these cars really are; in addition, a typical two-lane back road usually doesn’t leave much room for error. But a wide, and wide-open, smooth asphalt ribbon in the middle of nowhere is just the ticket for, well, avoiding tickets.

Ferrari of North America runs the Ferrari Driving Experience and owns the cars used in it. There are two courses offered: Basic and Advanced. These two-day events are identical to the first two levels of the factory’s Corso Pilota program, which is run at the Fiorano test track in Maranello. (For the record, the third and fourth levels of the Italian program, Evoluzione and Challenge, are where you go to hone your racecraft.)

I attended a Basic course, and soon discovered that it, like most driving schools, covers the basics: seating position, shifting, the importance of looking ahead, the proper line through corners, weight transfer and so on. The event is fairly light on classroom time and pretty heavy on seat time. The participants cycle through the track, which is divided into north and south loops for some exercises, a combined slalom and braking exercise and a wet skidpad. The skidpad is where participants learn to catch an oversteering car—and, if they master that, how to drift an oversteering car. 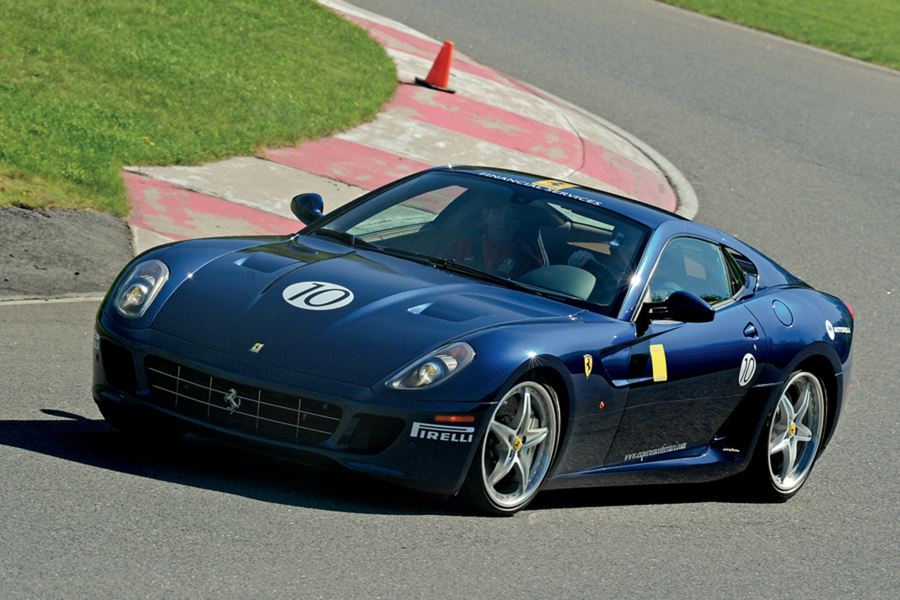 The exercises get more demanding, and the speeds climb, as the course continues. Interestingly, the instructors ask us to put the 458s, which are used most of the time, in Sport mode rather than the seemingly more appropriate Race mode. The reason is two-fold. First, they don’t want the unexperienced driver to fling the car off the track, and Sport mode steps in much sooner to correct errant inputs. Second, they want the driver to learn to drive the car without triggering the little light in the instrument panel that flashes urgently when the traction and stability control systems engage. While there’s a fair bit of roll in the corners in Sport mode, the 458 still offers plenty of stability and predictability. And, as the old saying goes, drive smoothly and the speed will follow.

There’s always an instructor next to you or in a car directly ahead. (The overall ratio is roughly one instructor to three students.) They deliver personalized instruction and allow speeds appropriate to your skill level. More than 60 percent of my class had never driven on a track before, which meant a lot of tentativeness early on. Based on what I saw, however, everyone improved, and that’s what the Experience is all about.

AFTER THE EVENT, I get in touch with a few of my fellow participants to ask for their impressions of the course. Nevin has owned all of the Ferrari V8s since the 308, as well as a 512 BB, but it was his purchase of a 458 that inspired him to take to the track for the first time.

“The 458 makes me feel like a good driver,” he says. “The car is so good that I felt like I could take it on the track and be an instant racer.” 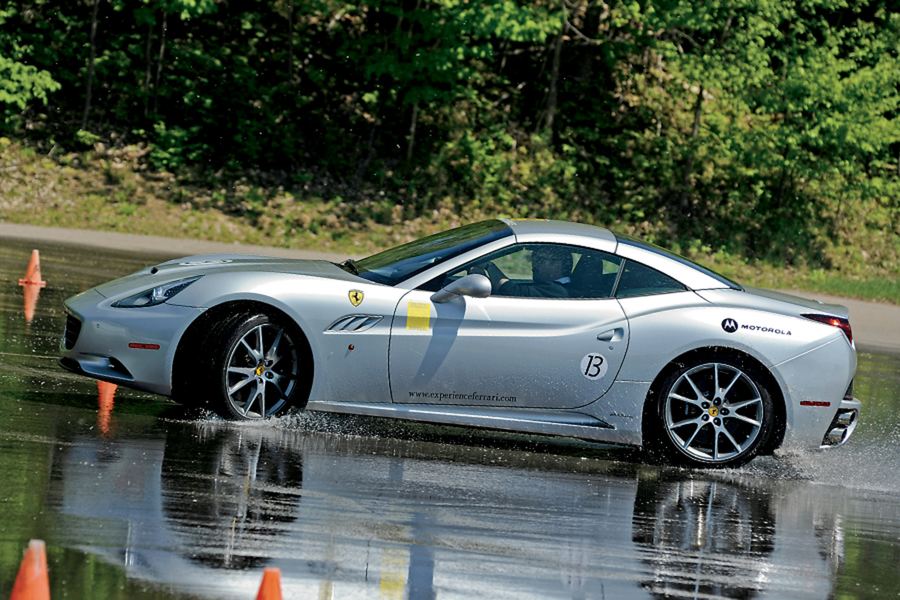 Mont-Tremblant is a demanding, technical circuit, but Nevin didn’t have any problems adjusting to it. “As a beginner, I liked the way they took us to basics then evolved it to where we ended on the last day,” he says. “On the last laps of the track, the instructor allowed me to push as much as I could.”

When asked if the event made him a better driver, Nevin is emphatic: “Yes, most definitely. The course exceeded my expectations.”

However, there was a downside of sorts to the event. “I now really have no desire to drive my car in traffic or on everyday city streets—it just seems pointless,” says Nevin. “Track time is addicting. I can’t wait to do it again.”

Tom drives three to four track days a year. He began more than 10 years ago with his 348 Spider, and has moved up through an F355 Spider and an F430 Spider to his current 430 Scuderia. This was his first time in a 458, and he liked it. 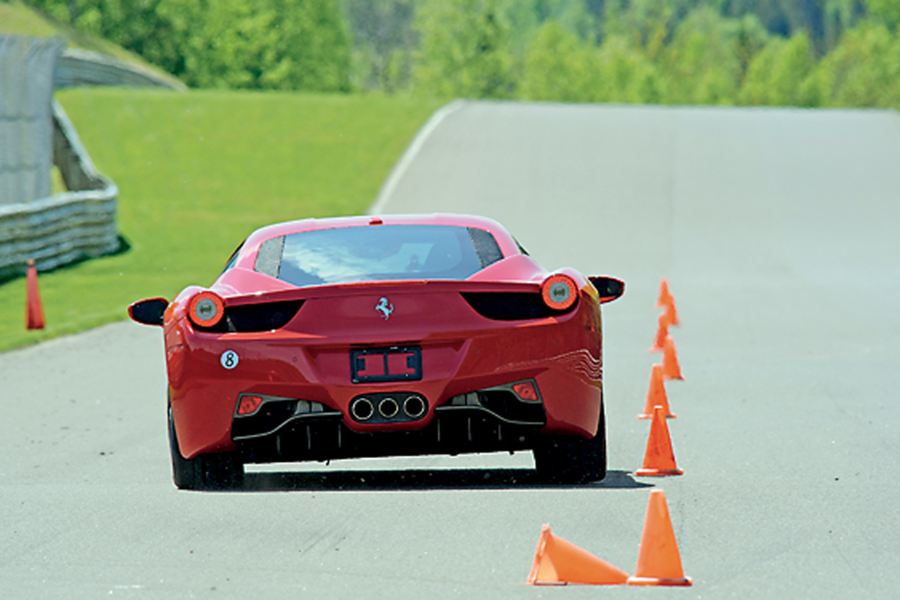 “I was extremely impressed with the Italia,” he says. “Its combination of speed, handling and control set a new benchmark for anything I have driven, including the Scuderia.”

Tom was also impressed with the circuit. “The track was extraordinary, with its mountain setting and unique combination of turns and elevation and camber changes,” he notes. “This is my new favorite track—sorry, Road America.”

Despite his prior track experience, Tom enjoyed the Basic course. “The instructors were very knowledgeable and excellent communicators,” he says. “My only qualifier is that experienced drivers may want to do the Advanced course to best match up with their experience level.”

Edward, a track novice who owns a 599 and a 458, was the only Basic participant who also attended the subsequent Advanced course. “It was better than I expected,” he explains. “There was more time spent driving because the class was smaller, and there were higher expectations of driving skill, longer lap sessions and data acquisition and analysis.” 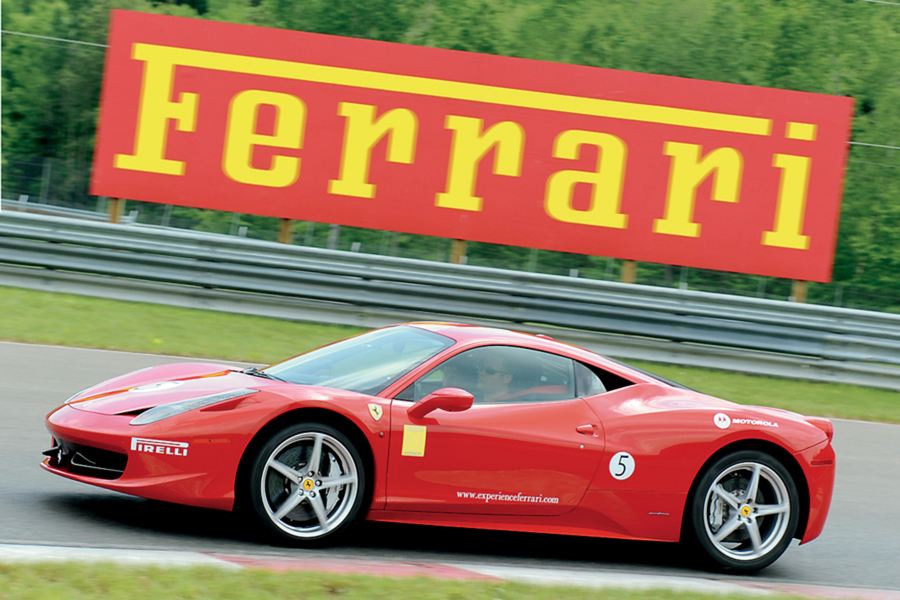 As with the Basic course, Advanced didn’t offer the opportunity to go flat-out solo, but Edward didn’t really mind. “The instructor cars go arbitrarily fast over multiple laps and their feedback was very useful,” he says.

“I got a lot of very specific feedback—both positive and negative—based on their observation of my driving and when they could speed up or had to slow down to pace me. Also, I got a lot of help from data acquisition. The traces do not lie, and seeing them change between laps was very helpful; it had a dramatic effect on my lap times.

“It’s also key to highlight the quality of the instructors,” he concludes. “The diversity of their approaches to the track was also interesting. Some were better than others at feedback, particularly when leading me, but all had something helpful.”

None of the participants I talked with had any complaints beyond a few wistful laments: “I would have enjoyed the opportunity to do more full-circuit lapping beyond our last half day,” says Tom. In addition, all of them thought the course was worth the price—a significant endorsement since each two-day event costs around $10,000.

What do participants get for their money? In addition to the track time and instructors, the event includes two nights of lodging at a local boutique hotel and meals. The biggest draw, though, is the cars. Unless you go to Maranello and attend one of the Corso Pilota schools, the Ferrari Driving Experience is the best place around to learn the driving ropes in a new Ferrari. 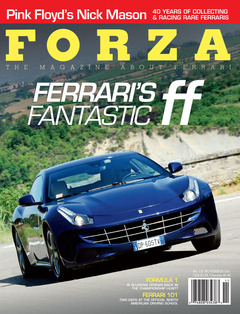