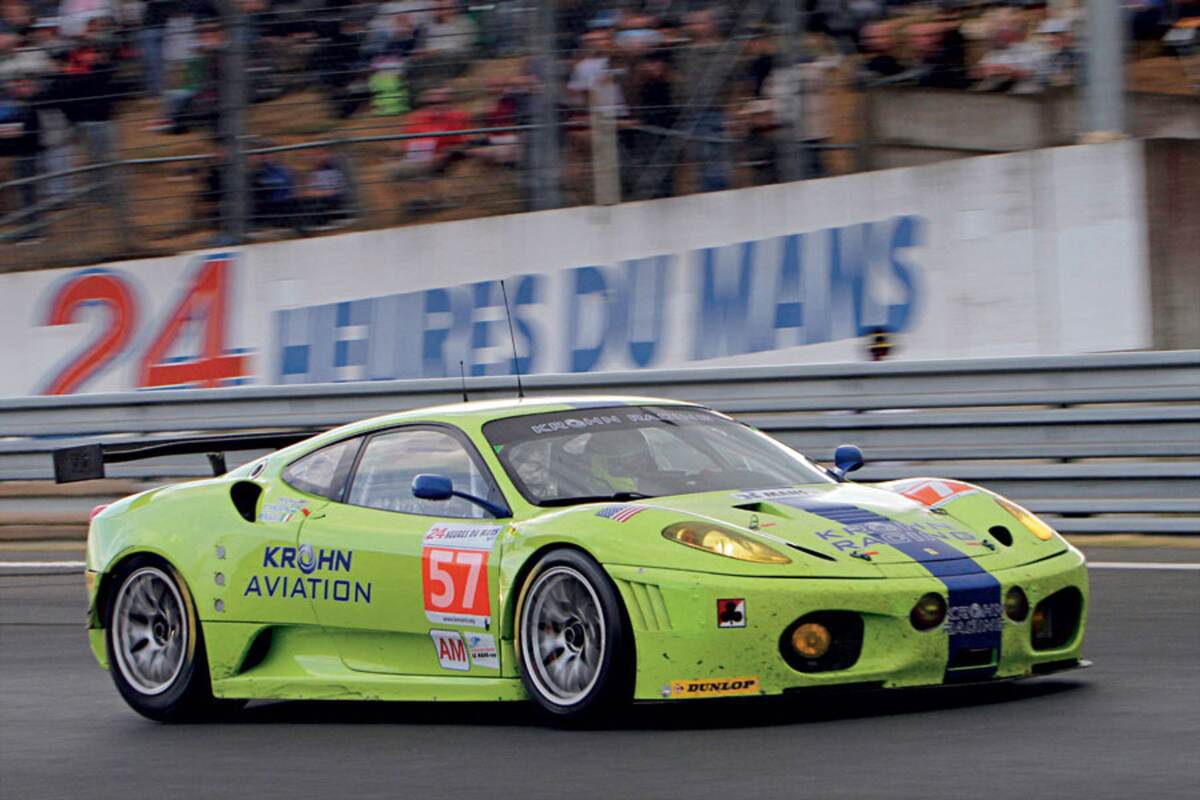 Texan Tracy Krohn, who has been campaigning his green Ferrari F430 GT in the American Le Mans Series since 2007, may just be the archetypal gentleman racer. “When I was in college, I bought a used MGB and put a roll bar in it; I thought it looked cool,” he recalled. “One day, I stopped to watch an SCCA autocross in the parking lot of the stadium. A guy loaned me a helmet, and I entered and won it. I won the next one, too, and the bug had bit. I wanted to try road racing, but then I blew the engine and couldn’t afford to fix it. It was game over.”

A couple of decades later, Krohn, after founding oiland-gas-exploration company W&T Offshore, bought a Porsche and went to racing school. “I then competed in an amateur racing series and finished second,” he said, “so I decided to try professional racing. I was very humbled by that experience!”

He may have been humbled perhaps, but his enthusiasm for racing wasn’t diminished. In 2004, he entered a Lamborghini Murcielago RGT in the ALMS. “The car was just a disaster,” Krohn said. “The chassis was too flexible, the motor and center of gravity were too high, and the car would go into a corner one way and come out another.”

The following year, he founded Krohn Racing to field a prototype in Grand-Am, the first in a string of cars to wear Krohn’s striking shade of green paint. “I then got to know Giuseppe Risi, who was running a professional team here in Houston,” he said. “First thing I knew, I was racing with Risi Competizione, a few races here, a few races there.” 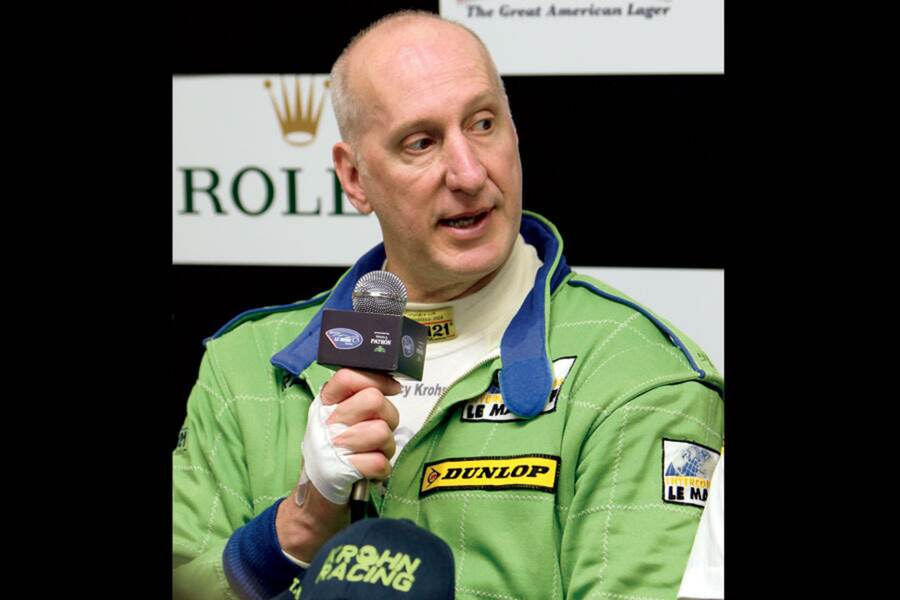 Risi supplied the pit crew, while Krohn and professional racer Nic Jonsson handled the driving duties. “Unlike the Lamborghini, the Ferrari was pretty well-sorted,” said Krohn. “We got a couple of podium finishes at Le Mans [in 2007 and ’09] and Sebring [in 2008].”

These results are very impressive for a privateer team. While GT-class racing has never been more competitive than it is today, it is usually the same group of factory-backed teams and professional drivers that fills the front of the grid and the podium. To even out this usually lop-sided state of affairs, the Automobile Club de l’Ouest (ACO), which organizes the 24 Hours of Le Mans and the European Le Mans Series, split its GT category into Professional and Amateur ranks for the 2011 season.

The GTE-Pro field consists of the top factory teams, with their full cadre of professional drivers, competing for the Manufacturer’s Championship in the latest models. Teams in GTE-Am are allowed just one pro driver and must drive cars that are at least one year old. “I think the new class evens things out a bit for us,” said Krohn.

In addition, the ACO expanded its Intercontinental Le Mans Cup (ILMC) championship to seven races around the world: the 12 Hours of Sebring and Petit Le Mans in the U.S., the 24 Hours of Le Mans plus races at Spa, Silverstone and Imola in Europe, and an enduro in Zhuhai, China. This opened up a whole new venue for interested teams, and Krohn jumped at the opportunity. 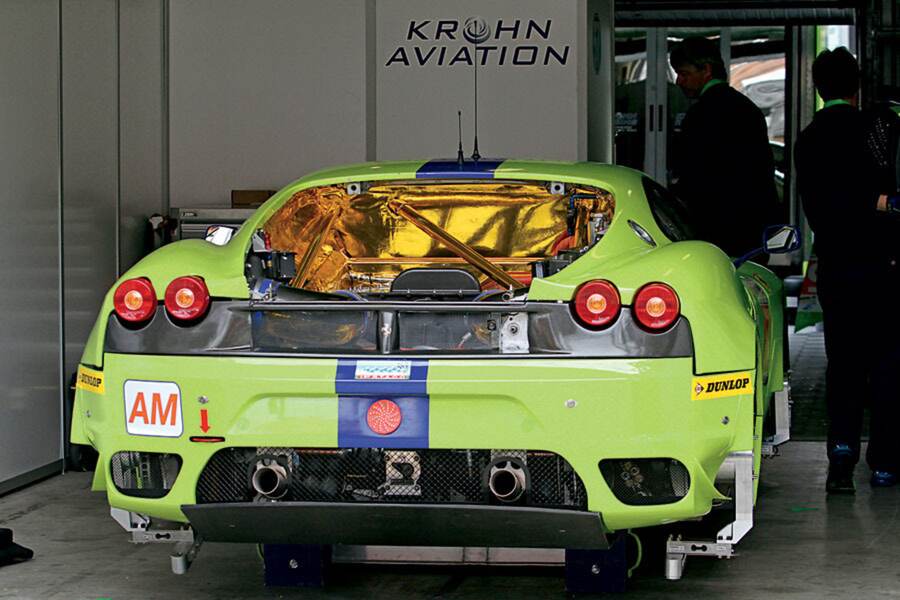 “I love the competition in Grand-Am,” he said. “The cars are fast and relatively safe, but the grids are dwindling and the American circuits used for that series don’t have quite the challenge and beauty offered by classic European circuits. Nic and I love racing in the amateur class in Europe and then coming back to America to run at the two American courses that are part of the ILMC. It’s the best of both worlds.”

SPECTATORS WERE TREATED TO THE BEST OF BOTH WORLDS when the 2011 ILMC season kicked off in Sebring, where the familiar U.S. teams were joined by European squads questing for the Intercontinental titles. The influx of new talent makes for fascinating racing, and the Americans return the favor when they travel to Europe.

In the five-car GTE-Am class, Krohn’s F430 was joined by an international cast of teams running a second F430, an Aston Martin Vantage, a Corvette and a Porsche 911 GT3 RSR. The Krohn Ferrari qualified second, but made all the right moves on race day to win its class—by 50 laps!

“Sebring was a classic endurance race,” said Krohn. “You need to keep it on the track and stay out of trouble. We had no engine problems, no issues in the pits, no penalties, and the car didn’t have a scratch when we were done. That’s how you win races.” 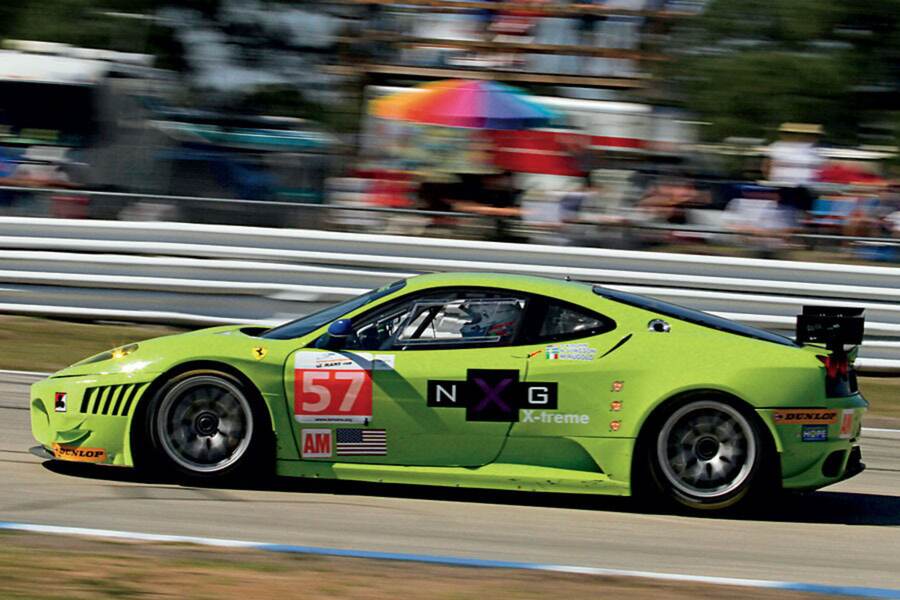 The second round of the ILMC was scheduled for May at Belgium’s legendary Spa circuit. Before that, however, Krohn, who wants to run the 24 Hours of the Nuerburgring next year, decided to race a Seat in an April VLN race at the ’Ring.

To learn the 16.1-mile, 170-turn course, Krohn hired a top local expert to coach him and Jonsson, and also spent some time with racing legend Hans Stuck, who was sharing their garage. “One thing we really learned from Hans was to give that circuit your complete respect,” said Krohn. “There’s no run-off there and lots of blind apexes, so you have to be certain. I memorized about twothirds of the track, but erred on the side of caution for the rest.”

There was another factor for Krohn to contend with: VLN races are big. In this case, 203 cars big, with 66 in Krohn’s class alone. “I started the race, it’s just you and 202 of your buddies out there, with cars stacked up on either side of you. After my first stint, Hans asks me, ‘How did you like it?’ I replied, ‘You Germans are crazy!’”

Krohn was hit in the first corner, but managed to get into the pits to fix a punctured tire without having to creep around the entire course. At the end of the day, he and Jonsson held on to finish 13th in class, 105th overall. 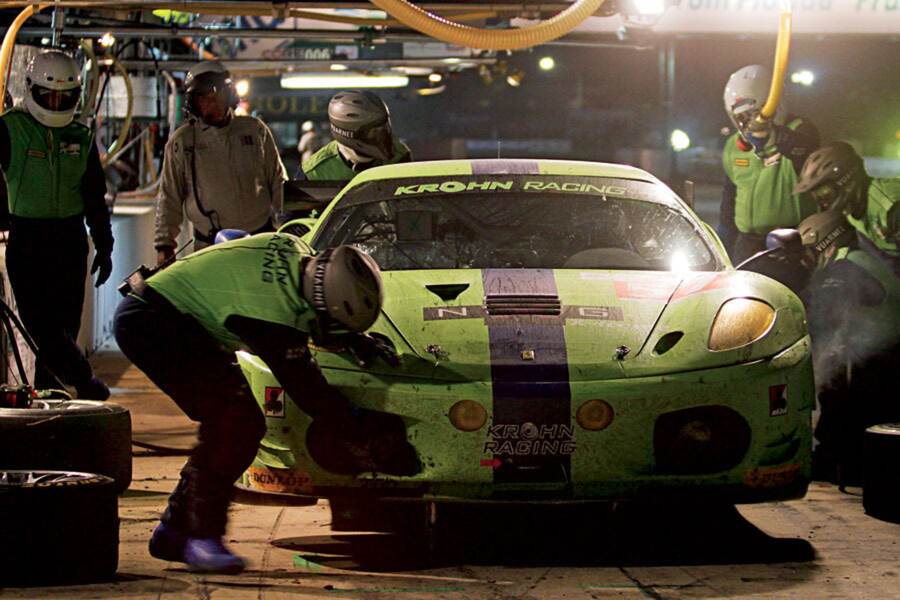 After the VLN event,Krohn and Jonsson headed to Spa for the ILMC race. Beforehand, veteran racer Eric Van de Poole, who Krohn had driven with in the U.S., coached them on the track. “It was a blast,” said Krohn. “We had an Audi R8, so Eric could really show us the lines at speed. It was unlike anything I’d experienced in America; that place is super fast! Once we got in our own car, we felt very comfortable.”

Krohn’s F430 qualified tenth in class, but things didn’t go smoothly in the race. “At the beginning of my second stint, one of the prototypes used me as a brake in Turn 1,” Krohn explained. “It cut a tire, and I had to limp around the track to the pits. Then a wheel got cross-threaded, and we had to fix that. After that, we were just playing catch-up.”

He still enjoyed the weekend, especially the size of the crowd in attendance. “You can’t believe the numbers,” he said. “There were well over 100,000 fans at the ‘Ring and at Spa. It’s just unbelievable.”

KROHN’S MOST RECENT ILMC RACE was the 24 Hours of Le Mans. It was his fifth time on the classic French circuit, and he went expecting to finish in the top three. Because he is running the full ILMC calendar, Krohn decided to use his own crew at Le Mans instead of partnering with Risi Competizione as he’s done in the past. “We have about ten people and go back and forth for each event, but we base the car in central Europe, transporting the car and equipment out to each event from there,” he explained. 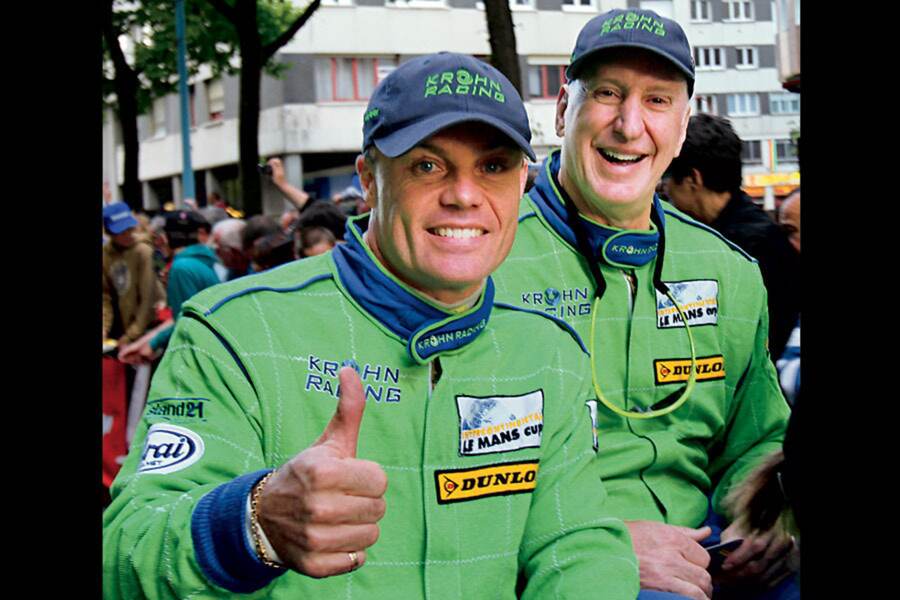 The Le Mans GT-class field was split between 18 pro teams and ten amateurs; the GTE-Am grid consisted of four F430s, three 911s, a Vantage, a Corvette and a Ford GT. The fastest car in qualifying was an F430 entered by Italian team AF Corse; its 4:01 time would have put it right in the middle of the Pro classification. Krohn’s Ferrari developed engine problems and could only qualify seventh, but a new, Michelotto-built engine was installed for the race.

The car ran well in the opening hours, always on the lead lap and occasionally among the leaders, falling back only when necessary to pit for fuel and tires. After the first stop, Jeff Hazel, the team’s manager, even ordered a slight reduction in engine speed to improve fuel economy. It was evident the car could comfortably hold a top position with little strain, and by 8 p.m. Krohn was leading the GTE-Am class.

It all came undone in the middle of the night, however. Around 1:30 a.m., the car’s brand-new engine disintegrated without warning, leaving Krohn to sit and watch as a Corvette took the class win.

With three of the seven ILMC races run—the fourth race, at Imola, will be held on July 3—Krohn sits third in the GTE-Am standings. And while the season is not yet half over, he is already looking ahead to next year. “We don’t have all the details yet, but I plan to do the ILMC if it’s there,” Krohn said. “It’s been a hoot so far!” 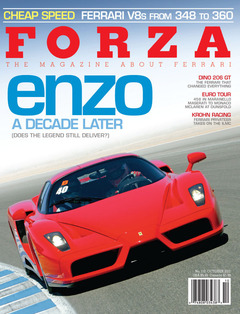