This may just be the coolest Ferrari the factory never built. It’s both a road car and a race car, which is appropriate since it’s an amalgam of a road-going Ferrari and a track-only Ferrari. There’s a third Prancing Horse mixed in, as well, this one a special project built by Pininfarina. All of this Maranello madness comes together under a new name: the P4/5 Competizione.

The P4/5C is the brainchild of New Yorker Jim Glickenhaus, who in 2005 commissioned its predecessor, the Ferrari P4/5 by Pininfarina. That car was, essentially, an Enzo rebodied by Pininfarina as a modern-day 330 P3/4, Ferrari’s famous 1960s sports racer. Designed by Jason Castriota, then the company’s head of design, and developed by special projects director Paolo Garella, the P4/5 appeared at Pebble Beach in ’06 and won an award at Villa d’Este the following year.

Despite its competition inspiration, the P4/5 is strictly a road car. However, Glickenhaus dreamed of seeing it race. “Wouldn’t it be great to take this to Le Mans?” he asked Garella after driving the car in the 2006 Targa Florio Historic road rally. While the question was rhetorical at the time, it later led to the creation of the P4/5C. But the venue would not be Le Mans, the car wouldn’t be based on an Enzo and neither Ferrari nor Pininfarina would be involved in its construction.

THE P4/5C PROJECT BEGAN in June 2009, when Glickenhaus contracted Garella, who had since left Pininfarina, and started looking for a race to enter. He soon decided on the 24 Hours of the Nürburgring, which in 2010 saw 250 cars roaring around a 15.2-mile combination of the infamous Nordschleife and the modern Grand Prix circuit for a full day.

“It is one of the great motor races, run on an incredible course that manufacturers use to measure and define their sports cars, and 250,000 people come to watch,” said Glickenhaus. “The organizers were very excited to find a way to enable me to build a one-off race car, and they even had an experimental class for us: E1-XP2.”

With the venue verified, it was time to construct the car. Glickenhaus initially wanted to start with a 333 SP sports racer, but found that the ’Ring organizers wouldn’t allow a carbon-fiber chassis. He then focused on another Ferrari with a proven race record: the F430 GT2, which, in addition to winning the GT2 class at Le Mans in 2008 and ’09, had finished second overall at the Nürburgring 24-hour race in 2010.

Glickenhaus soon purchased an F430 GT2, which would donate its engine, gearbox and more to the project. However, since the P4/5C was going to be street-legal at some point, a second Ferrari had to be brought into the mix.

“We bought a new, U.S.-specification 430 Scuderia, as we had bought a new Ferrari Enzo for the Ferrari P4/5 by Pininfarina, and used her chassis and other components,” explained Glickenhaus. This way, the P4/5C could be licensed in New York State as a 2009 Scuderia.

The final piece of the puzzle was the original P4/5, which would define the P4/5C’s appearance. Glickenhaus uncrated the molds Pininfarina had used to build the P4/5’s body, and had some of them shipped to Turin, Italy, where new panels were made from carbon fiber.

Why Turin? Because that’s where Garella had organized a team of about a dozen engineers and fabricators to create the P4/5C.

While several companies were involved in the build, the two main contributors were L. M. Gianetti and N-Technology, which formed a company called ProTo to develop the new car. Though these organizations were well-versed in racing, Garella had to focus them in a slightly different direction.

“The aim was to make an homage to the greatest racing Ferrari ever, but not to recreate a race car,” he said. “My biggest task was to keep the team focused on the fact that, one day, Jim wanted to drive it on the road. I always had in mind that we were writing a new page of motor-racing history, something different.

“Race performance was important, but not vital. Nobody would blame us if the car had been slower than the donor car…and, actually, it was not. For us, the perfection of the shapes, the quality of the design and the refinement of the surfaces were the ultimate goal of the project.”

BY JUNE 2010, the 430 Scuderia and F430 GT2 had arrived in Turin. The donor cars were soon stripped down, and the merging of the road car’s chassis with the race car’s hardware began.

The proven 4-liter GT2 engine was left mostly untouched. Due to its reduced displacement and air restrictors, the GT2-spec V8 makes less power than the stock 4.3-liter 430 Scuderia mill: 450 hp versus 510. The race car’s transmission, a six-speed sequential unit from Hewland that features a shift lever instead of paddles, also remained stock, as did its brakes and most of its suspension.

“We did some work on the front geometry, but very little things, although we do have new double-adjustable shock absorbers from Extreme Tech,” said Garella. “I do not see this car as a patchwork; it has its own very clear spirit. The use of tested parts just comes from the kind of project we are doing, and is the most efficient way to build a reliable race car.”

Numerous new components had to be developed for the P4/5C. For example, the roll cage is unique, the Sparco steering wheel was customized to incorporate controls for the car’s traction control, ABS and engine mapping, and dozens of brackets and connectors bearing a small “P4/5C” logo are scattered around the car. When pressed for an exact number of custom parts, Garella shrugged.

That sentiment certainly holds true for the car’s bodywork. While the P4/5’s center section and doors were recreated, as was a polycarbonate version of its windshield, the rest of the P4/5C’s body was designed from scratch. It is made up of three main pieces: the nose/front fenders clamshell, the rear deck/rear fenders clamshell and the rear bumper, all of which were crafted in carbon fiber.

Compared to the P4/5, the P4/5C is about an inch longer and two inches narrower, with a two-inch shorter wheelbase. It’s also about 7.5 inches longer and 3 inches wider than the donor 430 Scuderia.

Beyond aesthetics, Garella’s design focus was on developing downforce. Due to time constraints, however, he did not utilize a wind tunnel. “We just used CFD [computational fluid dynamics],” Garella explained. “It was very helpful.”

The big bodywork components required plenty of computer development time, as did the smaller ones. For example, four designs for the external rearview mirrors were considered before a final version was selected.

“It’s amazing how complex the project is,” said Glickenhaus. “In addition to looking good and working well, the mirrors also serve as aerodynamic devices to smooth the airflow to the rear wing.”

In an unusual turn for what would normally be a top-secret project, the P4/5C was an internet celebrity before it ever turned a wheel. Glickenhaus began posting about the project on FerrariChat.com from the outset, and later created a Facebook page to tell the story to a wider audience.

“I’ve always enjoyed watching things come together, and felt that I wanted to let others be a part of this adventure,” he explained. “As our mechanicals are basically Ferrari GT2, keeping things secret seemed silly. The number of fans following us is truly amazing. For example, over the last 30 days, 1,742,232 people have viewed our Facebook posts.”

THE P4/5C’S NEW BODYWORK was fitted to its chassis in November 2010, while the GT2 engine was installed and fired up in December. By early 2011, the completed car was ready for testing.

The team tested for roughly ten days, splitting its time between Vallelunga, Franciacorta, Paul Ricard and the Nürburgring. Drivers Luca Cappellari, Fabrizio Giovendari, Nicola Larini and Mika Salo each got behind the wheel, turning laps and plotting improvements. Every test session saw changes: aerodynamic settings, gearbox ratios, spring rates, differential settings, brake pads, cockpit cooling. When the fender-mounted apex lights, which illuminate the track’s corners separately from the main headlights, didn’t work as planned, they were relocated to the nose, and the resulting available fender space was dedicated to larger dive planes.

Tire testing was also crucial. Pirelli, which was developing a new line of racing rubber, became a sponsor and supplied the P4/5C crew with an abundance of tires.

“In one test session, we tried 80 sets!” said Glickenhaus. “We now have a tire that can last for a full stint with full grip.”

The P4/5C’s competition debut came at a 200-car, six-hour Veranstaltergemeinschaft Langstreckenpokal Nürburgring race in late April. (VLN events and the Nürburgring 24-hour race are very similar, with many overlapping rules, regulations and entrants.)

“The first race was very interesting,” said Glickenhaus. “We went out in the wet and qualified 28th out of 169, but then the track dried and we didn’t have time to qualify again on slicks. In the race, we moved up to 14th over four laps, then came in for fuel. We had an over-long pit stop, and as the engine was shut down and there was no engine cooling, we overheated. We’re fitting an electric cooling pump and radiator fan to solve this problem.”

The team is also investigating the possibility of changing classes, which would give them more power and fuel in exchange for a higher minimum weight. In its current E1-XP2 trim, the P4/5C requires ballast to bring it up to the class-minimum 1,250 kilograms, or 2,756 pounds.

The P4/5C’s next race will be another VLN event in mid-May. The 24 Hours of the Nürburgring takes place in late June.

Glickenhaus is talking with various event organizers about racing the car at other venues—such as Le Mans and Daytona—but, at some point, the P4/5C will be converted into street-legal form. Although it will race with catalytic converters, a passenger seat and air-conditioning, plenty of work will be required for this conversion, such as reinstalling the 430 Scuderia’s fuel tank and 4.3-liter V8 (a forced-induction setup is being considered for road use) and raising the car’s ride height. In the end, though, Glickenhaus will have the Ferrari he’s been dreaming of.

“I’ve driven the P4/5C at the tests,” he said, “and even though she has less horsepower than the Scuderia, she’s much faster around a race course. She’s very easy to drive, and her grip and brakes are amazing—her cornering speed is unreal. Plus, she’s very comfortable, and the visibility is much better than in the Scuderia. I can’t wait to take her on a long road trip.” 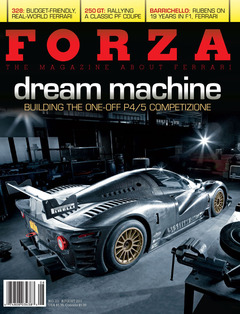