With an eye toward track work, this fiberglass-bodied 308 received a period performance makeover. 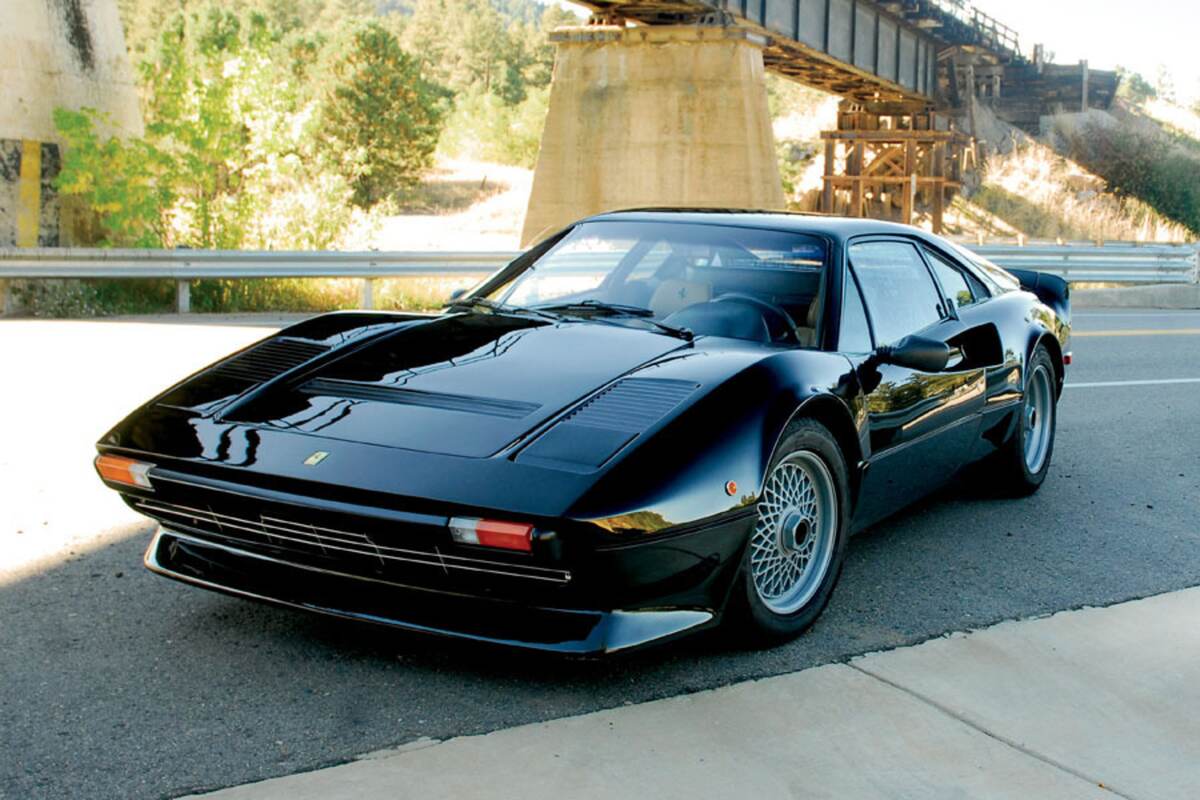 In the world of Ferrari 308s, a European-specification fiberglass-bodied dry-sump GTB is widely considered the most desirable. Its composite body is lighter than the later steel bodywork, and its carbureted 3-liter V8 engine produces 255 horsepower at a screaming 7,000 rpm.

This ’76 308 (s/n 19211) is one of those desirable Euro models. It arrived in the U.S. the year it was built, and its first owner was John LoGuercio of Rio Rancho, New Mexico. But neither LoGuercio nor Ferrari was responsible for the car’s center-lock BBS wheels and subtly flared fenders. Those changes are the work of a later owner, a Wisconsin dentist named Gordon Meffert.

In 1982, the Ferrari was sitting at a dealership in Albuquerque. That’s when Meffert spotted it in a magazine’s classified ads, and knew he had to have it. “It was exactly what I had been looking for,” he recalled. “It was a fiberglass car and it was dry sump.” 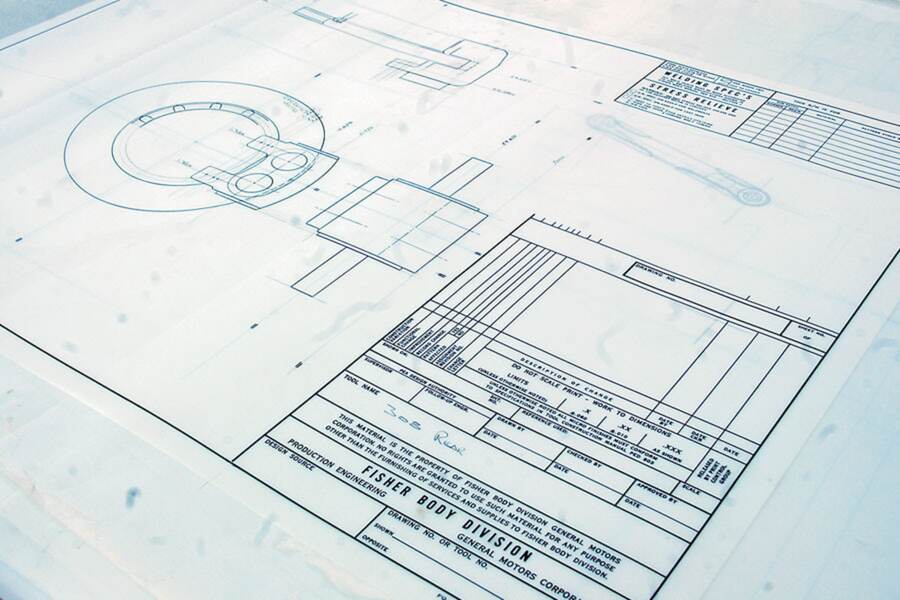 Meffert, the Sports Car Club of America’s Rookie of the Year in 1971, wanted to race a Ferrari, and the 308 looked like the perfect platform to work with. The fiberglass car reportedly weighed 200 pounds less than a steel equivalent, while the dry-sump oiling system would help prevent engine-oil starvation under severe cornering loads.

The stock Ferrari was just the beginning of what he had in mind, however. “I knew I was going to modify it even before I bought the car,” Meffert said, admitting that he had entertained larger ambitions for the project, including selling the aftermarket equipment he developed for it to other Ferrari owners. While the project never evolved into a commercially viable business, that doesn’t detract from what is still a very cool car.

Meffert started his modifications with the 308’s suspension. The original Koni shock absorbers were removed and sent off to be revalved. When the reworked shocks were installed, the car’s handling was actually worse than stock. The solution was to order directly from Ferrari a new set of shocks and springs, which, says Meffert, were intended only for “off road use.” The new components were stiffer than the originals, and Meffert said they transformed the 308, reducing body roll and significantly improving handling. 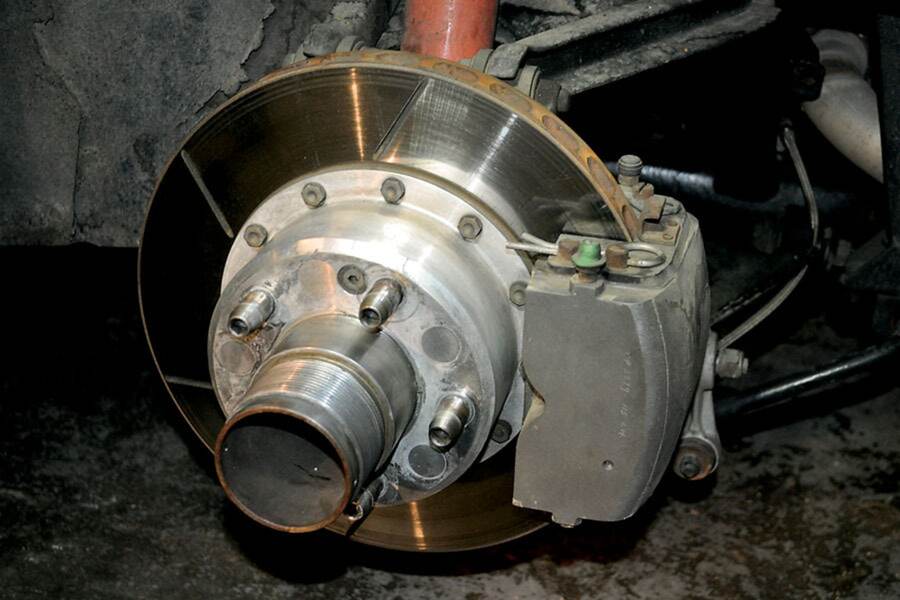 With the help of an automotive engineer who worked for General Motors, custom center-lock hubs were designed and fabricated to replace the stock five-lug hubs, a decision that Meffert revealed was made as much for aesthetic reasons as for performance and durability concerns. With conventional wheels no longer an option, a set of custom three-piece 16-inch alloys was ordered from BBS North America. Meffert also had brake specialist AP Racing design a custom setup that included larger calipers and rotors.

In addition to improving the 308’s performance, Meffert wanted to enhance its appearance. A local body shop subtly widened the Ferrari at all four corners by slicing off the outer portion of the factory fenders, grafting new fiberglass “fill strips” to the car and then re-attaching the original fenders. At the rear, a large, nearly horizontal spoiler was integrated into the trailing edge of the engine lid and tops of the fenders.

Though the 308’s wider stance, rear spoiler and center-lock wheels are similar those of the 288 GTO, Meffert says any similarities are purely coincidental, and that his car was completed shortly before Ferrari unveiled the GTO in 1984. The changes were actually inspired by the AC Cobras Meffert had raced years earlier; he wanted a look similar to that of the six 289 Cobras constructed to FIA specifications for the 1964-65 United States Road Racing Championship, which have a fully flared fender rather than the tacked-on extensions of earlier 289s. 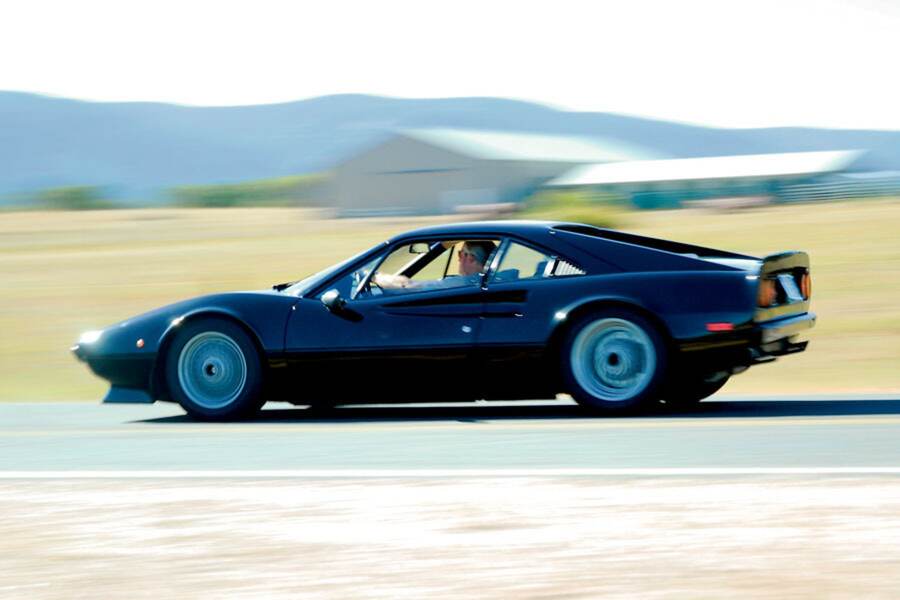 Not long after the 308’s suspension and body changes were completed, Meffert sent the car’s engine to mechanic John Hajduk, owner of MotorKraft in Bensenville, Illinois, who rebuilt the V8 with higher-compression pistons, hotter P6 camshafts and a few other goodies. A performance muffler was bolted on in place of the stock muffler, and a track-oriented, dual-plate clutch replaced the factory’s single-plate unit.

In 1995, Meffert decided to try his hand at vintage racing with a McLaren M8F, so he sold the 308 to a man he only remembers as “a young airline pilot from back East.” In 2000, the Ferrari went to exotic-car dealer Gary Seale in Texas. A couple years later, Seale sold the 308 to its current owner.

BILL MCABEE DIDN’T KNOW THE FERRARI’S HISTORY when he bought it in early 2002, but he was intrigued by the modifications. “I had never seen anything quite like it,” remembered McAbee. “It really caught my eye.” That’s saying a lot for a guy who had been in the car business for 20 years, spending the last half-decade before he retired as the manager of Ferrari of Dallas. 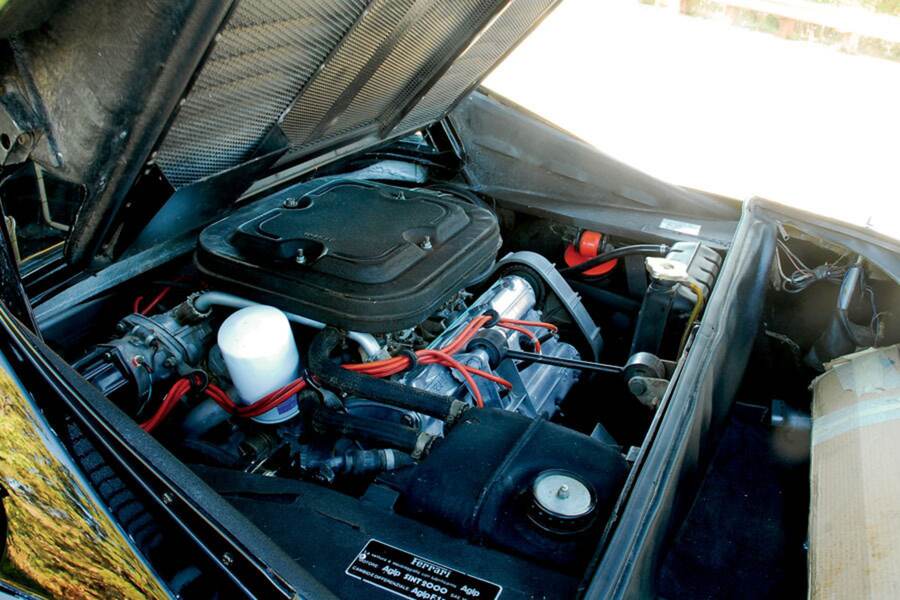 Upon closer inspection, McAbee discovered the extent of the modifications, as well as the quality of the work. This, combined with the car’s rarity (Ferrari built 712 fiberglass-bodied 308s, of which an estimated 500-600 were Euro-spec models), was enough for him, and he soon had it parked in his garage next to a 550 Maranello, one of the ten Ferraris he’s owned.

McAbee lives in Colorado, and the Ferrari’s engine didn’t like the 6,500-foot-higher elevation of its new home. So, McAbee sent the 308 to Steve Noe of Mondino Imports in Colorado Springs, where the Weber carbs were rebuilt, different jets were installed and the fuel system was sorted. “After that, it passed emissions and ran right,” said McAbee.

Noe also replaced the dual-plate clutch with a stock clutch. “The dual plate was like an on-off switch,” McAbee said. “It was not real pleasant, especially on the street.” 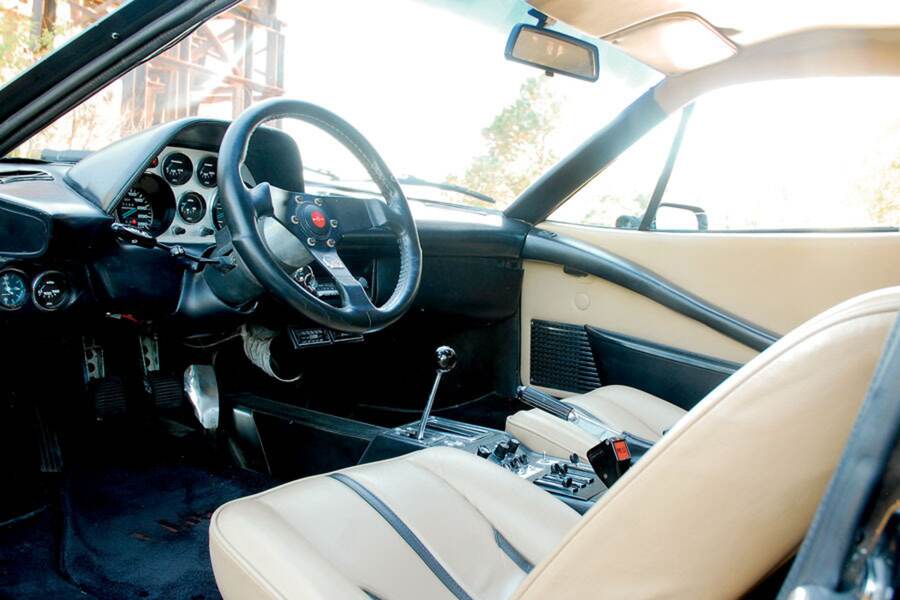 The BBS wheels were originally painted gold, which McAbee didn’t like, so he had them powdercoated a matte gray. At the same time, a fresh set of Avon tires was fitted (225/50ZR16s at the front, 245/50ZR16 at the rear). McAbee also thought the seats were looking a little worse for wear, and had them reupholstered in their original color.

IN PERSON, MCABEE’S FERRARI looks far more purposeful than a stock 308, mostly due to its motorsport wheels and decklid spoiler. This altered appearance has probably left more than a few onlookers wondering about the car’s identity.

Sliding into the cockpit reveals another change made during Meffert’s ownership: a more ergonomic Personal Fittipaldi steering wheel. The rest of the interior remains stock, including the small oil-temperature gauge and clock mounted to the left of the steering wheel, which are unique to early 308s. The green needles of the speedometer and tachometer nicely mirror the green accents on the tan seats. 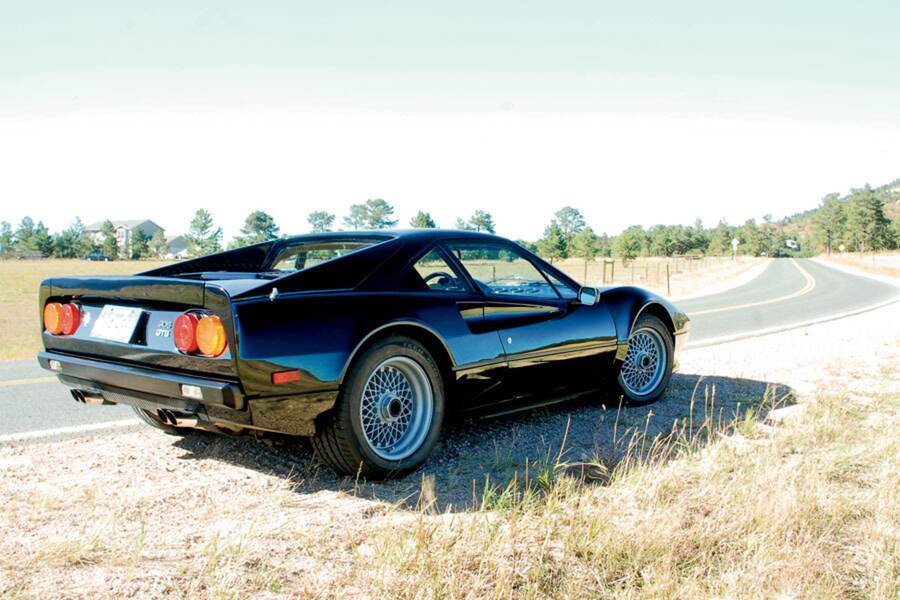 Firing up the V8 produces a deep, eager burble from the free-flowing exhaust, while the aggressive cams cause a slightly lumpy idle. At low speeds, the controls are heavy, the steering’s weight heightened by the smaller-than-stock steering wheel. Once up to speed, though, the car relaxes, its controls lightening and becoming more responsive. The shift action is smooth and direct, if on the heavy side, the metal lever clacking definitively through the gates.

On the road, the driving experience is not radically different from that of a stock 308, but it is obvious that performance has been enhanced. Thanks in part to these hotter cams, this V8 revs more quickly and enthusiastically than an unmodified engine. The mid-range push is strong, but the engine really comes to life once the tach needle swings past 5,000 rpm, producing strong power all the way to redline. Along the way, the engine note changes from a hollow roar of intake and carburetor induction to a positively wailing shriek.

This 308 feels more responsive and nimble than a heavier, metal-bodied car, a sensation enhanced by the wider tires and stiffer suspension. The Ferrari’s limits are noticeably higher than a stock 308’s, and it rolls much less in the bends. The AP brakes do a fine job of shedding speed, though they are not a day-and-night improvement over the originals.

It’s unlikely that anyone today, if handed the pink slip to a rare 308, would modify it so extensively, but it seems very fitting that one owner did just that. While the factory developed a 308 race car [“Privateer Prototype,” FORZA #93], it neither raced it or produced more, leaving owners to go their own way when it came to racing their own Ferraris. And this is one car that definitely goes its own way. 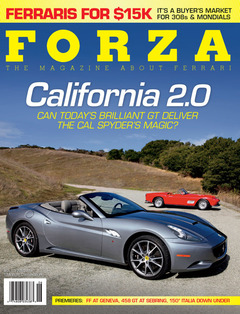