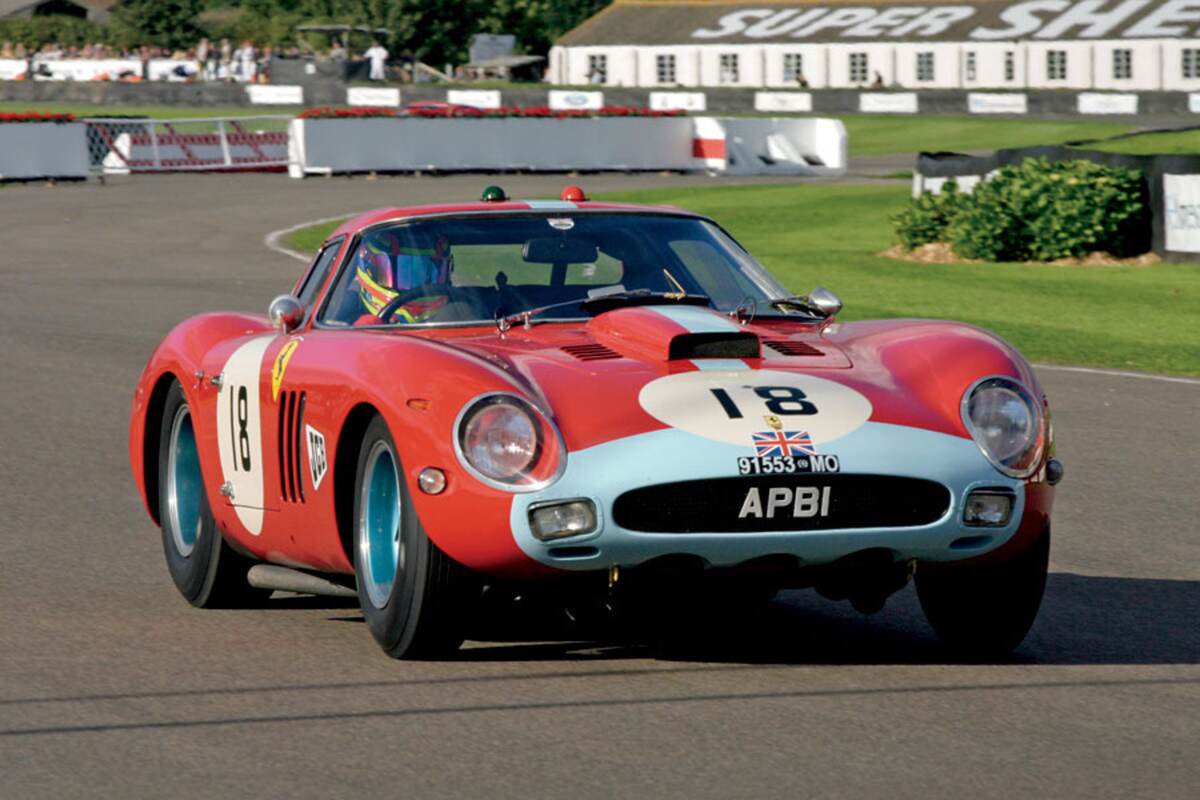 The annual Goodwood Revival celebrates the best in vintage racing, and the most prestigious race of the Revival, held at the historic 2.4-mile Goodwood circuit in Southern England, is the one-hour, two-driver Royal Automobile Club Tourist Trophy Celebration. Open to closed-cockpit 1960-’64 GT cars similar to those that raced in the original RAC TT, the 2010 grid was comprised of six AC Cobras, seven Jaguar E-Types, a Lister Jaguar Coupe, the Aston Martin Project 212 and three DB4 GTs and a Sunbeam Lister Tiger. Plus of course, a number of Ferraris: two 250 GTOs, a 250 GTO/64, five 250 GT SWBs (one wearing distinctive Drogo bodywork), the 330 GTO and a 330 LMB.

These machines are amongst the most valuable racing cars in the world, and it is a credit to their owners that they are raced at all, let alone in such a gladiatorial arena as this. You see, the competition is as close and as hard as modern touring-car racing—contact, scrapes and bangs, as well as offs into Goodwood’s unforgiving dirt banks, are not exactly uncommon—and most of the pilots are current or retired professional racing drivers who want to win. Make no mistake, the RAC TT is not about gentlemen racers pottering around in their priceless toys!

The list of celebrity drivers was as impressive as the list of cars, and included Bobby Rahal, Derek Bell, David Hobbs, Jochen Mass, Jackie Oliver, Emanuele Pirro, Oliver Gavin, Martin Brundle, Richard Attwood, Brian Redman, Desire Wilson, Anthony Reid and Red Bull F1’s Adrian Newey and Christian Horner. Many of these pilots were new to their mounts, but most were sharing the cars with highly experienced drivers who had raced them regularly and knew them inside out. 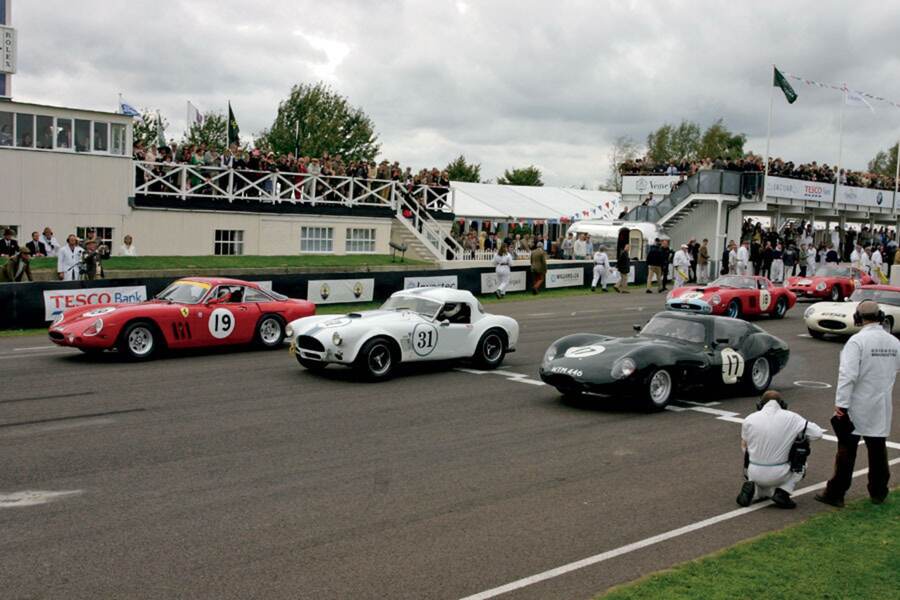 One such man was Peter Hardman, an historic-racing specialist with 29 seasons under his belt. Hardman (could there be a better name for a racing driver?) was charged with giving Sir Anthony Bamford’s glorious 250 GTO/64 (s/n 4399GT) its first Revival TT win, something Bamford had been trying to achieve since 1998. The Ferrari was certainly on familiar ground, having won the original TT at Goodwood in 1963, driven by Graham Hill. It was rebodied by Scaglietti in its current guise at the end of that season, whereupon Innes Ireland and Tony Maggs drove it to sixth overall at Le Mans in ’64.

Hardman had already worn Goodwood’s victor’s laurels: In 2008, he and Bobby Verdon-Roe won the TT in Harry Leventis’ 330 LMB (s/n 4381SA). Then in 2009, after Hardman switched to the Bamford camp, he was leading the race in the GTO/64 when an original electrical switch failed, cutting the engine and handing victory to Bobby Rahal and Adrian Newey in their highly developed lightweight Jaguar E-Type.

Could Hardman win in 2010 and, in doing so, become the first driver to win the TT in two different Ferraris? “After leading last year, there was an expectation that we could do quite well,” he said, so the pressure was on. Hardman was again sharing the GTO/64 with ex-Formula 1 driver Jean-Marc Gounon, a man he describes as “phenomenally quick,” but they would still have to beat the 330 LMB, now driven by Verdon-Roe and eight-time Le Mans-winner Tom Christensen, not to mention the Rahal/Newey E-Type and some very fast Cobras. This would be no cake walk. 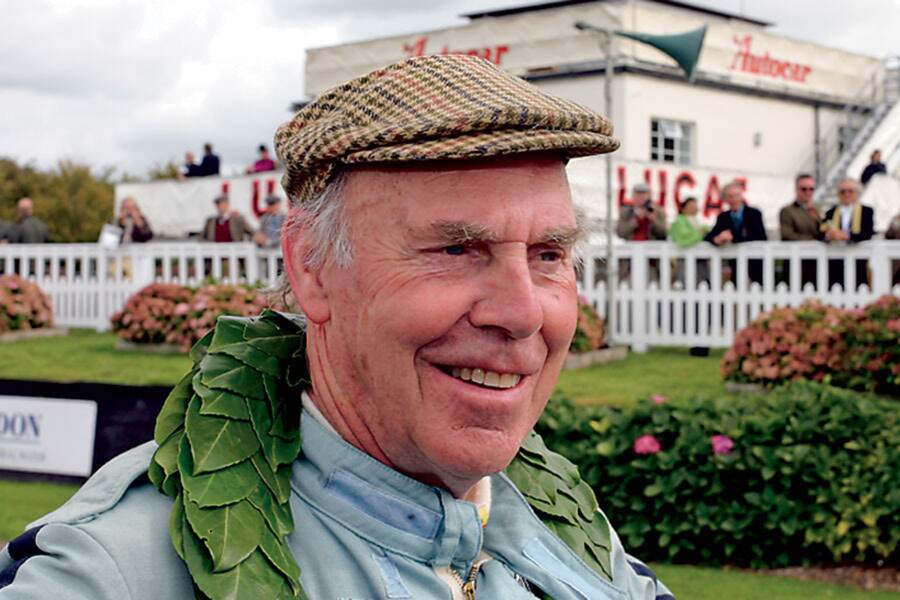 THE 250 GTO/64 AND THE 330 LMB are very different cars, with different strengths and weaknesses. On paper, the larger-engined, more powerful 330, one of just four built, should be quicker. Developing 390 horsepower from its 4-liter V12, the LMB was reportedly the first car to crack the 300-km/h (186-mph) barrier at Le Mans, when Mike Parkes clocked 187 mph there during pre-race testing in 1963. But at Goodwood, both the LMB and the 3-liter GTO/64 clocked an identical 149.5 mph through the speed trap.

“The 330 has about 60 or 70 more horsepower than the 250, so it is faster getting to its top speed down the straights,” explained Hardman. “In the 330, you approach some corners faster, but it’s heavier and carries more fuel, so you also have to brake earlier than in the 250. The 330 is very quick, but it uses its rear tires to do the times. It’s probably quicker than the 250 by half a second a lap over a couple of laps, but it wrecks its rear tires and then it is half a second, maybe a second, slower.

“The 250 will keep it up all the time, although it’s harder work,” he continued. “You need to maximize the handling to get the lap times, so you are always pushing to the maximum going into corners and need to carry the speed through them. It’s a much stiffer car and quite edgy, with a narrower window of handling before it gets a bit wayward. It’s not very progressive and if you go too far it just snaps away, whereas the 330 slides more gently.” 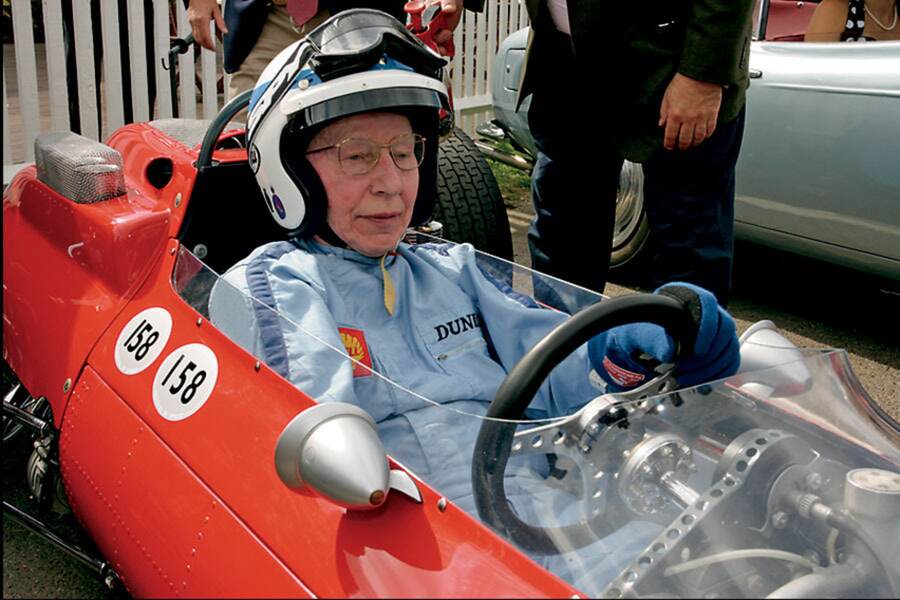 The Ferraris showed their speed in qualifying, with pole position claimed by Verdon-Roe and Kristensen in the 330 LMB. The Cobra of Rob Hall and Australian Touring Car Champion Jim Richards sat second, followed by Anthony Reid and Justin Law in a Lister Jaguar, Hardman and Gounon in the GTO/64 and the E-Type of Rahal and Newey in fifth.

However, the positions were a bit misleading: Just 0.116 second separated the top three, and less than 0.6 second covered the top five. The race was shaping up to be a real humdinger.

IN THE HOURS LEADING UP TO THE START of Sunday afternoon’s TT, there was plenty of wheel-to-wheel action from the support races, a special tribute to World Champion John Surtees and a celebration of BRM. In commemoration of the 70th anniversary of the Battle of Britain, visitors were treated to fantastic air displays by WWII fighters and bombers, marching military bands, a parade by Battle of Britain veterans, patriotic singing, a stirring, Churchillian-esque speech by event organizer Lord March and ear-splitting field-gun salutes from horse-drawn artillery. All this built into a crescendo that peaked with the RAC TT. 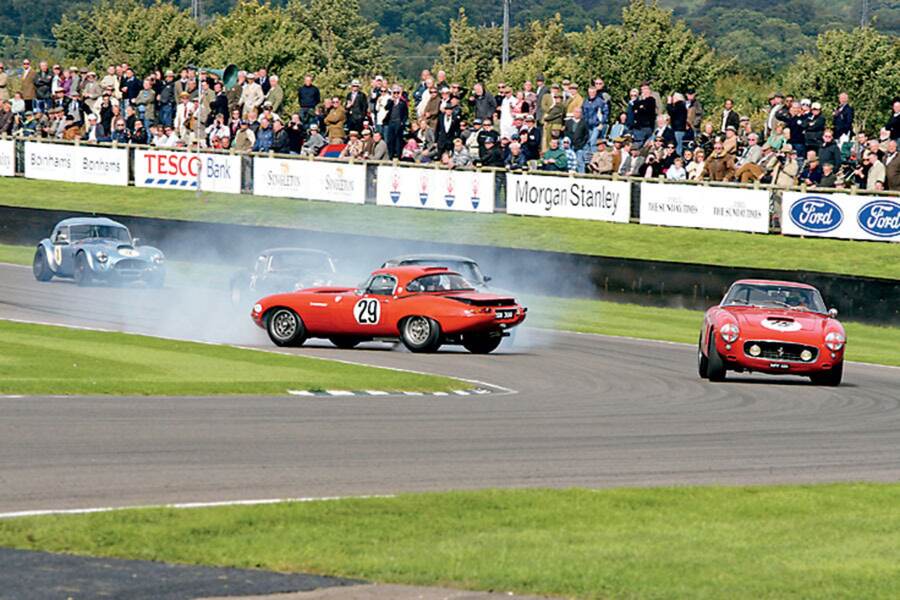 As the gleaming GTs formed up in front of the heaving grandstands, they were flanked by mini-skirted girls holding the grid-position placards and period-dressed mechanics. The grid cleared at the sound of a klaxon, the cars ran a sighting lap and then lined up on the grid. Engines revved in anticipation of the start. The bowler-hatted official dropped his Union Jack flag. Tires spun furiously, and the cars jostled for position on the run to the first corner.

The Lister Jag took the lead, followed by the Cobra, the LMB and then the E-Type. “I got too much wheel spin and didn’t get away that well,” said Hardman, “and Adrian [Newey] got in front of me. He drove well and we had a good dice for a couple of laps, then I got past.”

Up front, the Cobra and the LMB quickly out-dragged the Lister, which then fell into Hardman’s grasp. “The Lister didn’t seem that fast in a straight line, but it is light and handles really well through the corners,” he said. “I got by into third, and had a couple of completely clear laps to catch the two leaders. These were actually the first clear laps I’ve ever driven in this car around Goodwood, and it was really quick.” 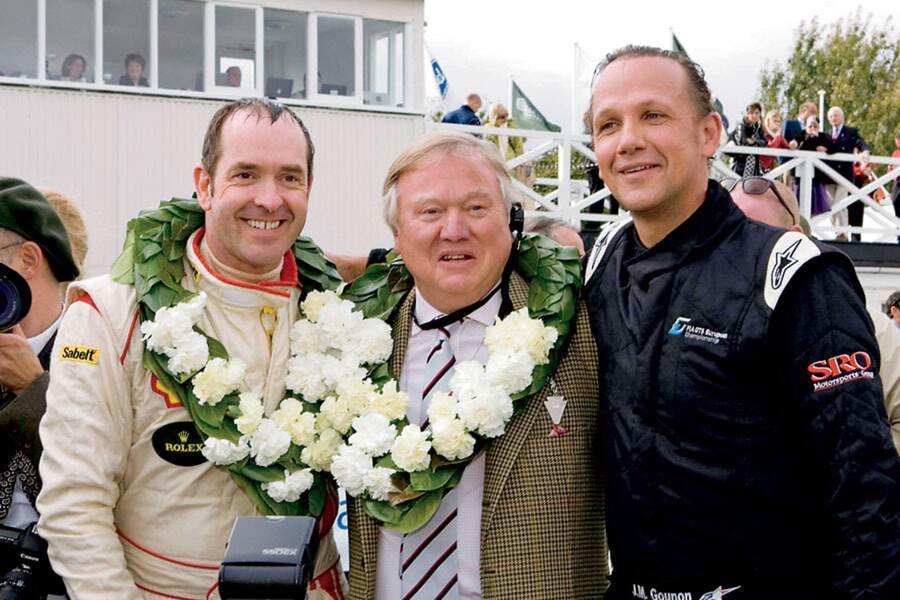 Hardman soon caught up to Verdon-Roe in the LMB. “On some corners I was almost running up the back of him, but I couldn’t get on the power because he was in the way,” remembers Hardman. “Then he’d get on the power and pull away again by six or seven car lengths. Halfway down the straights it would even out, but then I would be later on the brakes for the corner and catch right up again. It was on the very high-speed corners where I had an advantage, where I could carry more speed.”

The Ferraris ran nose to tail for a few laps, but began to fall back from the leading Cobra as Verdon-Roe started driving defensively. Hardman decided to stop pushing, and allow both cars to catch back up to the leader.

“I knew that their quickest drivers were in the cars, so I knew that my co-driver, Jean-Marc Gounon, would be quicker than the other two guys who were going to get in,” reasoned Hardman. “So I thought if I stayed close, we would do well enough to win. But Rob [Hall, in the Cobra] was still pulling away, so I had to get past Bobby. I held onto his bumper through Fordwater, after being very committed through the previous corner, and then managed to slide through. I waved to him as I went by. I had lined him up so that, when I got past, I had a clean run through the next two corners, so that he couldn’t keep on my tail and then power past me again down Lavant Straight. After I passed him, he dropped back pretty quickly and then retired.”

NOW THE CHASE WAS ON for the lead Cobra. “That Cobra was so bloody fast down the straight it made Bobby’s 330 look slow, and I always thought that was one of the fastest cars in a straight line!” said Hardman. “But I was gradually reeling him, and I saw that Rob was struggling a bit for grip on the rear, so I had a go. Bobby Rahal [in the E-Type] had gone off a lap earlier when he lost a wheel. There were yellow flags at the scene, but once past them I think I caught Rob napping and I went by him—but I overdid it, ran wide and got on the grass and spun. It was a bit annoying, really. There was quite a gap back to third because Bobby had dropped out, so I think I only lost one place.”

Hardman pitted just as the safety car came out to remove the E-Type. “Much of the media coverage said I came in early because I had damage after the spin,” he said. “That wasn’t the case, as I was due in anyway. Rob did an extra lap and got caught up behind the safety car. I’m not sure exactly what happened next, but someone told me that when Rob pitted, his co-driver wasn’t ready, so they fumbled their pit stop terribly. Although they probably had a 20-second lead on us, it put them out of contention. Jean-Marc was ready for me, and after he came out and everyone else had pitted, he was leading the race.”

Gounon was able to slow by two seconds a lap to preserve the car, yet still get to the checkered flag 20 seconds ahead of the Cobra of Nicolas Minassian and Oliver Bryant. Third place went to the Lister Jag, while the Hall-Richards Cobra finished fourth.

On the slow-down lap, an exuberant Gounon performed celebration donuts on Lord March’s grass. “I wanted to show the crowd how happy I was,” he said on the podium. Joked Hardman, “He was just copying me with my spin!”

Sir Anthony Bamford was absolutely delighted to have, at last, won the Revival TT, as was Hardman. I’m sure Graham Hill would have approved, too. It was a fantastic race to cap off another glorious Goodwood. 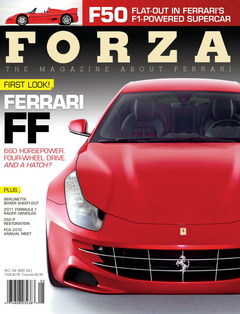