After spending most of its life locked away in a museum, the Dino Berlinetta Competizione finally sees some action. 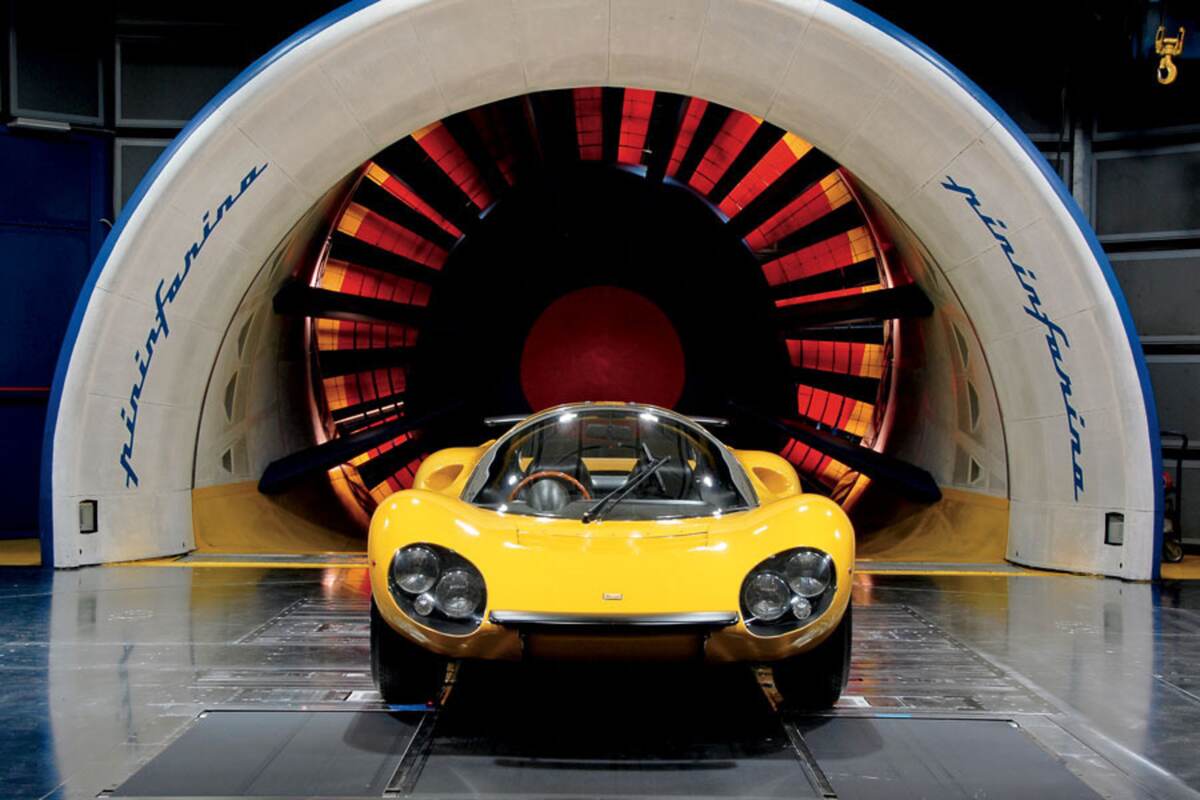 By the mid-1960s, Ferrari had been enjoying great success with its mid-engine race cars for several years. Enzo Ferrari knew the time was right to begin producing mid-engine street cars, but he was hesitant to fit such a machine with his famous V12 engine, fearing that regular drivers wouldn’t be able to handle the combination of power and tricky at-the-limit handling. So, Enzo decided to test the mid-engine waters with a V6-powered car.

Pininfarina was tasked with designing the car, and its first road-oriented Dino prototype was the curvaceous Berlinetta Speciale 206S, which debuted at the Paris Auto Show in 1965. It was followed one year later at Turin by the second prototype, the Dino 206 GT. The car you see here is the third and final prototype, the Dino Berlinetta Competizione.

The Competizione was first shown at the ’67 Frankfurt Auto Show, one year before the production Dino 206 GT debuted. Like its prototype predecessors, the Competizione featured a longitundinally mounted V6 engine behind a two-seat cockpit and sweeping aluminum bodywork, but it carried Dino design in a new, racy direction.

The car’s front and rear wings—which were reportedly added by company management over the objection of designer Paolo Martin—gullwing doors and stripped interior give the car a serious competition flavor, a theme echoed by its name. The prototype was never raced, but does feature some proper racing hardware under the surface.

The Berlinetta Competizione’s chassis is stamped 10523, which was Pininfarina’s internal work order for the project, but many historians believe the chassis is that of an unused Dino 206 S sports-racer (s/n 034). The origins of the 2-liter 12-plug Tipo 231/B V6 racing engine are also a bit murky, but it does appear to have a racing history: Each head has a 1966 Le Mans scrutineering stamp on it. 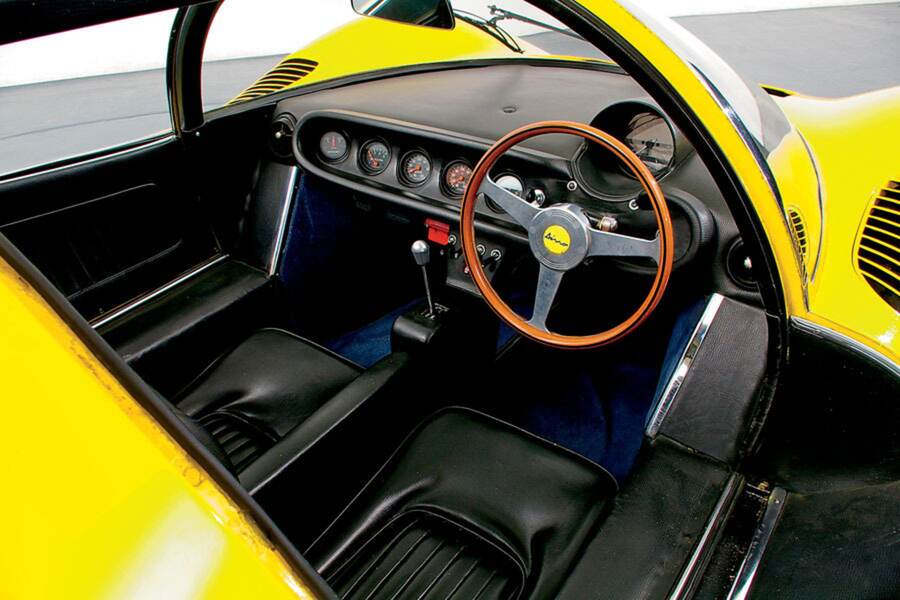 All of this adds up to a fascinating car, but one that was also short-lived. After its Frankfurt debut, the Competizione appeared at the 1968 Los Angeles Auto Expo, and that was about all she wrote. Aside from a handful of public appearances, the car spent most of the next four decades sitting inside the Pininfarina Museum.

Today, however, there’s another chapter to add to the story. Thanks to new owner Jim Glickenhaus, the prototype is back in the public eye—and, for the first time, on the road.

GLICKENHAUS IS BEST KNOWN to automobile enthusiasts as the man who commissioned the one-off, Enzo-based P4/5. While he was in Italy visiting Pininfarina during the development of that car, he first saw the Competizione.

“I was enthralled by how great it looked and how much Ferrari sports-racing DNA it contained,” Glickenhaus recalled. “But when I first saw it, it clearly wasn’t for sale.”

After Glickenhaus got to know then-company president Andrea Pininfarina, he asked to buy the car. “At first, Andrea had no interest,” he said. “But as more time passed and he saw how I really used my cars and made them available for others to see at shows and rallies, I think he came to feel that I would get a much wider audience for this car and Pininfarina by getting it out into the world.” 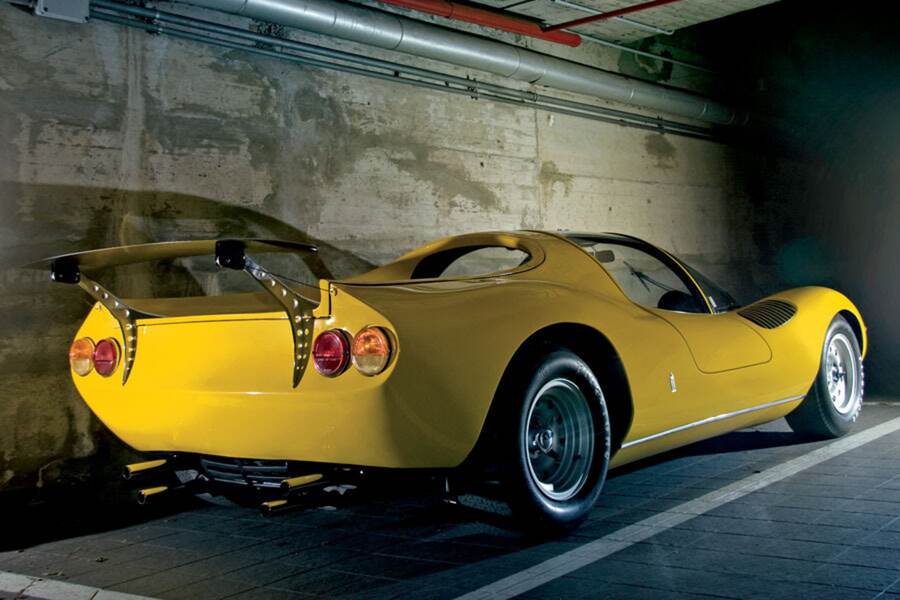 Pininfarina eventually agreed to sell the Competizione, but the prototype wasn’t simply handed over. Instead, the car was restored to suit Glickenhaus’ desire to drive it.

“The car had been used very little over its life, but it was in need of a complete disassembly and cleaning,” he explained. “Pininfarina and I decided that we would use very gentle art-restoration techniques to bring her back to operating condition.”

Respecting the integrity of the Competizione was crucial to Glickenhaus, but while he was careful not to remove original paint overspray, for example, he didn’t leave everything in original condition. Or even in place.

For instance, the steel doors were so heavy that they threatened to bend the hinges if left open too long. So Glickenhaus had exact copies—down to the visible hairline cracks—built from carbon fiber. This task was made easier by having Pininfarina’s original drawings and blueprints of the car, as well as a 3D computer scan of the entire vehicle.

The original seats were also replaced with near-exact duplicates that are a bit thinner, while the pedal box was moved forward slightly. These changes gave the 6-foot-1 owner a bit more legroom, though he said thin, narrow shoes are still required to avoid getting tangled in the pedals. All of these modifications were done in such a way that they could be reversed in the future 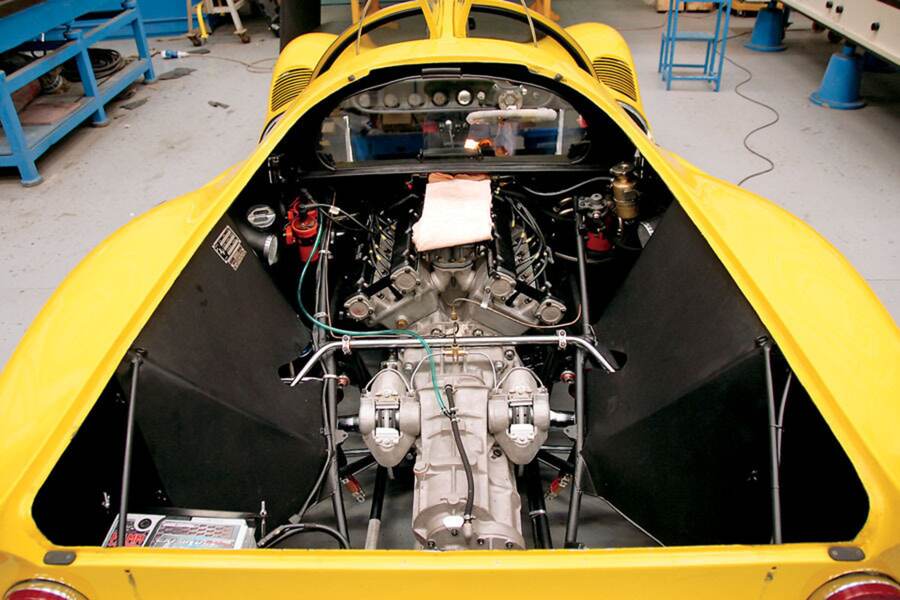 Elsewhere, the disassembled car was painstaking cleaned. To ensure reliability, hundreds of electrical connections were refurbished, as were the original aluminum fuel tanks and all of the rubber parts.

In the meantime, the engine was sent to Auto Technica in Turin. When the V6 was torn down, it was discovered that the heads had been fitted with four intake camshafts. Four new cams were made—two intake and two exhaust this time—with lift and duration suitable for street driving. Auto Technica also tore down and cleaned up the car’s transaxle, which features a sequential shifter. These devices were sometimes used on prototypes of the era, to prevent missed downshifts and the resulting overreved engines.

In 2008, with the powertrain sorted, Pininfarina reassembled the Competizione and handed it over to its new owner. “It took over 1,000 man-hours to completely go through her,” said Glickenhaus. “But when we were done, she was as she was when she was born, and also fully functional.”

Soon after, Glickenhaus drove the car in the Historic Targa Florio. While he was thrilled by the experience, he did discover a problem with the prototype.

“Up and down the mountains revving hard, she stayed cool, as she did at moderate speed on the highway, ” he explained. “At high highway speed, she began to overheat.” 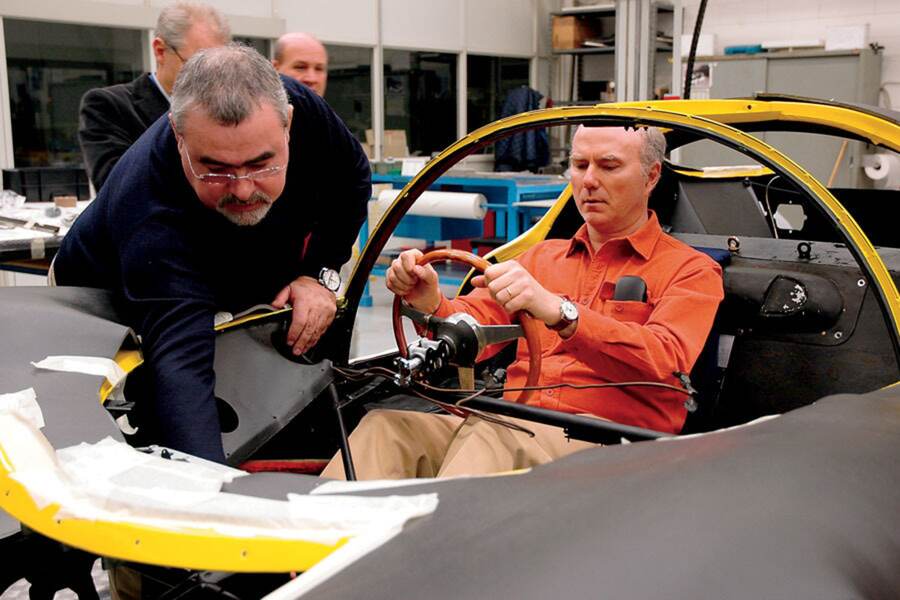 The car went back to Pininfarina, and into the wind tunnel. There, the tech-nicians discovered that, at high speed, the shape of the car was creating an air bubble that effectively blocked airflow through the radiator. A tuning vane was engineered to solve the problem.

“At the same time, we learned that the Competizione has the same coefficient of drag as a small truck,” said Glickenhaus. “Also, if one tries to adjust the rear wing to produce more downforce, the front wing can’t compensate and the nose lifts off the ground.” Don’t forget, this car was built right at the dawn of aerodynamic wings.

THE COMPETIZIONE HAS SINCE RETURNED to the United States, and Glickenhaus invited me to his garage north of New York City to see it. I’m here to say that pictures don’t do this prototype justice.

Despite its aggressive appearance, the Competizione shares many themes with the production Dino. The buttresses that connect the greenhouse to the rear fenders are similar, as are the four round taillights. The slats cut in the rear deck are close to the road car’s, as are the engine air inlets on the flanks. Both cars share similar bulging front fenders and side profiles, including a distinct crease that runs down the side around wheel level.

But what really strikes me are the details, such as the supports for the wings. The front one is propped up from underneath by slender silver struts bolted to the body, while the more stylish rear wing is supported by two gracefully curving aluminum uprights. The latter have been drilled with holes of various diameters in an apparent effort to reduce weight. 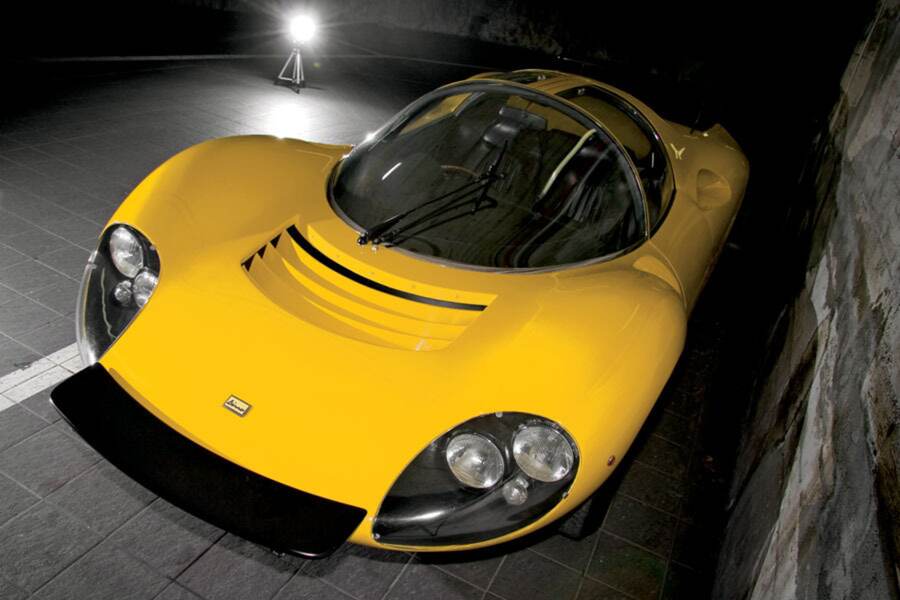 Two slender wires emerge from holes in the top of the rear fenders and connect to the bottom of the wing, suggesting that its angle of attack is remotely adjustable. But it’s not.

The car’s Plexiglas headlight covers are shaped from several complex curves to match the sweeping fenders. The windshield curves in three different directions, and its forward-most point stretches an impressive distance from its rearmost. Still visible from close up are the marks where the windshield was pulled out of its mold; the car really feels like a time capsule.

After we’ve inspected the Competizione, Glickenhaus offers me a ride. I gingerly squeeze through the tight door opening into the left-side passenger seat, which is small and jammed very close to the driver’s. A row of gauges stretches across the metal dashboard; the tachometer sits proudly right in front of the driver. Nearby are the original Heuer rally clock and stopwatch. A small speed computer, like those used on bicycles, is tucked under the dash. The wood-rimmed steering wheel is mounted on a steering boss from a Mercedes-Benz 300SL, which allows it to be folded down, thus slightly easing the pilot’s entry.

The process of starting the Competizione feels much like a helicopter preflight. For one thing, the three downdraft Weber carburetors are not fitted with chokes, so the engine needs five or six minutes to warm up to prevent stumbling. In addition, Glickenhaus always walks around the car to check a few crucial bolts.

Once we’re on the road, perhaps the most spectacular element of the experience is the view through the windshield. It’s easy to fantasize about running at Le Mans or the Targa Florio when you peer down the hood between those two rising, voluptuous fenders. The rear wing splits the scenery out back. The view is nicely complemented by the Dino V6’s melodious song from right behind your back. 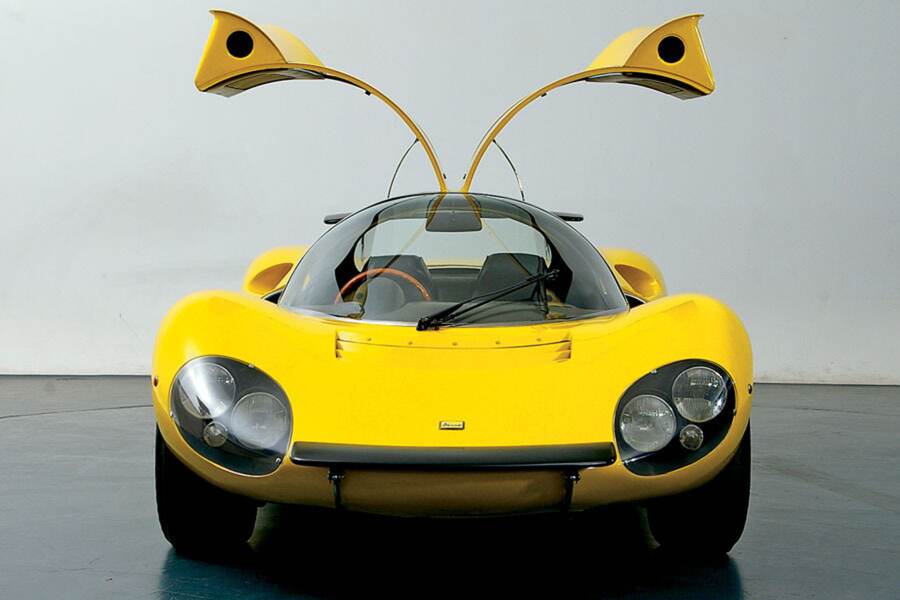 The 2-liter engine produces around 200 horsepower at 7,000 rpm, enough to push the roughly 1,500-pound Competizione along smartly. (The V6’s redline is supposedly 8,900 rpm, but Glickenhaus doesn’t like stressing the motor to the extreme.) The car’s gearing is very short—Glickenhaus suspects it is fitted with hillclimb ratios—and its shifter requires some muscle.

When it’s time to slow down, the Competizione’s four disc brakes are mostly up to the task. However, it definitely helps to anticipate your stops.

On a practical note, the car’s ride is relatively comfortable for such a low-slung, short-wheelbase machine, thanks in part to the modern gas shock absorbers that replaced the oil-filled originals. There are no exterior mirrors, only a single interior one, so extra care must be taken when changing lanes. Air-conditioning is also absent, but the side windows can be partially opened, which, when combined with the fan Pininfarina added to aid interior ventilation, delivers reasonable cooling.

I first saw the Competizione at the 2009 Fairfield County Concours in Westport, Connecticut, one of its first post-restoration appearances. The crowd was a mix of youngsters who had no idea what the little yellow car was and older folks (like me) who at least had an inkling of its identity. That’s no surprise, but it was striking how much attention the prototype received from both groups of enthusiasts.

That’s really the happy ending of the Dino Berlinetta Competizione story. Not only has a unique Pininfarina prototype been brought back to life, it’s now thrilling new audiences for the first time in more than 40 years. 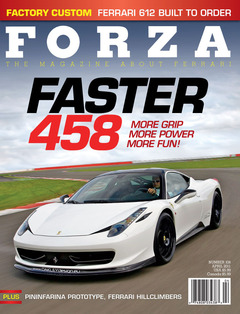