It took 27 years, fresh paint, new leather and an extensive mechanical makeover, but one Ferraristi finally has the car of his dreams. 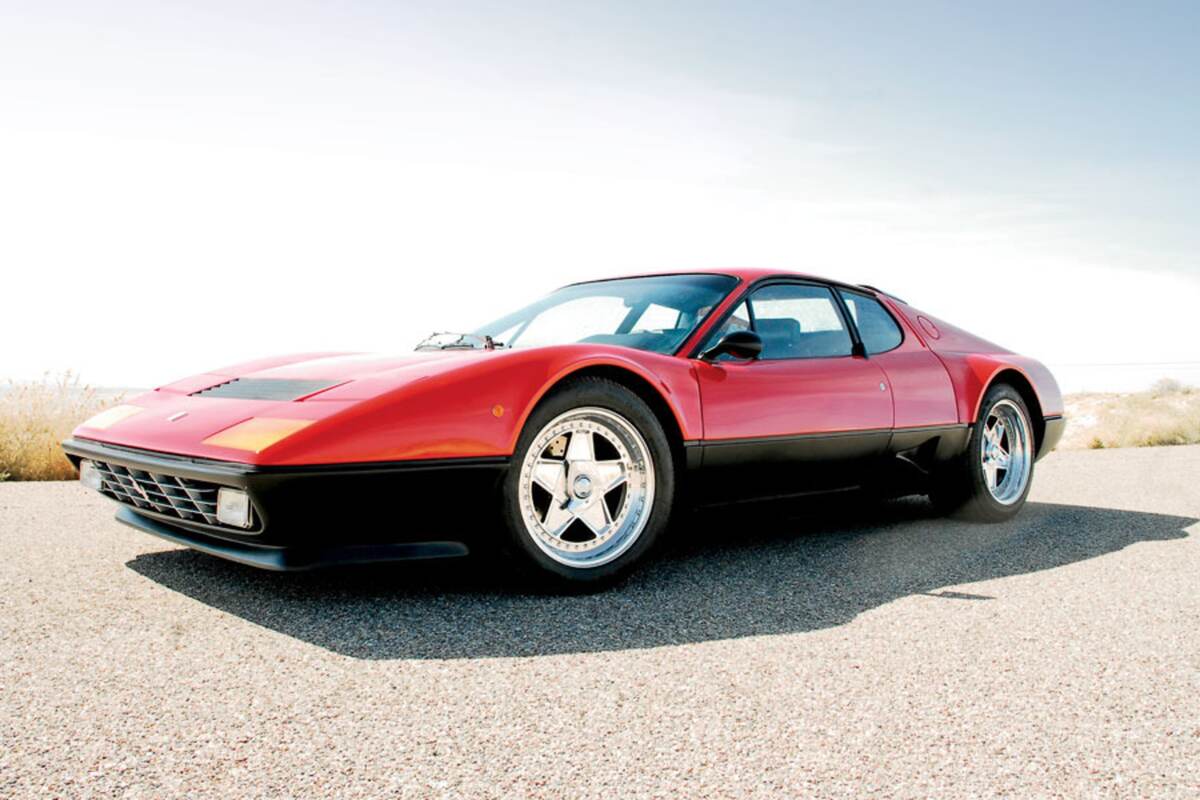 Lee Jolley remembers the day he saw his first Ferrari as vividly as if it was yesterday—even though it was nearly 40 years ago. In 1971, as he walked through the parking lot of his local church early on a Sunday morning, he spotted an impossibly long and low car, one he had never seen before. When he stopped to look more closely, he discovered it was a 365 GT 2+2. “It had those highly polished wire wheels and was red over tan, and was so sleek,” recalls the Costa Mesa, California resident. “I could not get that thing out of my head. At that moment, I decided I was going to own a Ferrari some day.”

By 2004, after many years providing engineering services to the construction industry, Jolley was finally in a position to buy the car of his dreams. However, his target was not the chrome-bumpered 365 he had seen so many years before; it was the more-modern 512 Berlinetta Boxer. Credit the change to the famous Road & Track cover that pictured a Boxer emerging dramatically from a bank of fog, as well as a later article in which Sam Posey compared the 512 BBi to the Lamborghini Countach S. “I still go back and read that article,” admits Jolley.

Initially, Jolley figured a late-model, fuel-injected version would be the way to go. After driving several examples, however, he couldn’t quite wrap his head around the fact that his old college car, a ’66 Chevelle 396, had delivered a stronger kick in the back. “I started to think I didn’t want a 512 at all,” he says. 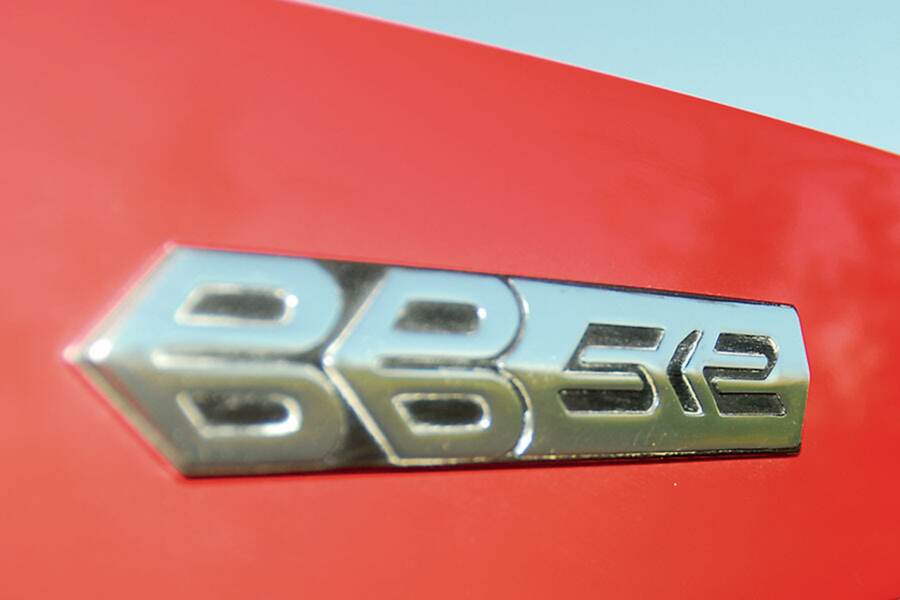 During his search, Jolley had gotten to know several people in the Ferrari world, including Tate Casey and Bert Wehr of Carobu Engineering. When he told Casey of his disappointment with the injected cars, “Tate told me that what I wanted was a carbureted Boxer. He also told me that there was a lot more tuning potential with a carbureted car.” And so the search shifted.

In November 2006, Jolley heard about a carbureted 1981 512 BB (s/n 35411) for sale in Oakland. He flew up, and found it was exactly what he was looking for: “There was no comparison with the injected Boxers.” The European-specification car was mechanically solid and, as an added bonus, had somehow avoided being modified to comply with stringent U.S. DOT and EPA requirements.

On the other hand, the Ferrari’s cosmetics were, well, ratty. The front and rear windows were cracked, the front spoiler was damaged and there were several door dings. The interior featured an awful black-and-white color scheme. But the body was basically straight, and the rough condition did allow for some extra bargaining room on the price, so a deal was soon struck. The car was shipped straight to Carobu, and a plan was formulated for a complete restoration—with some additional performance thrown into the equation. 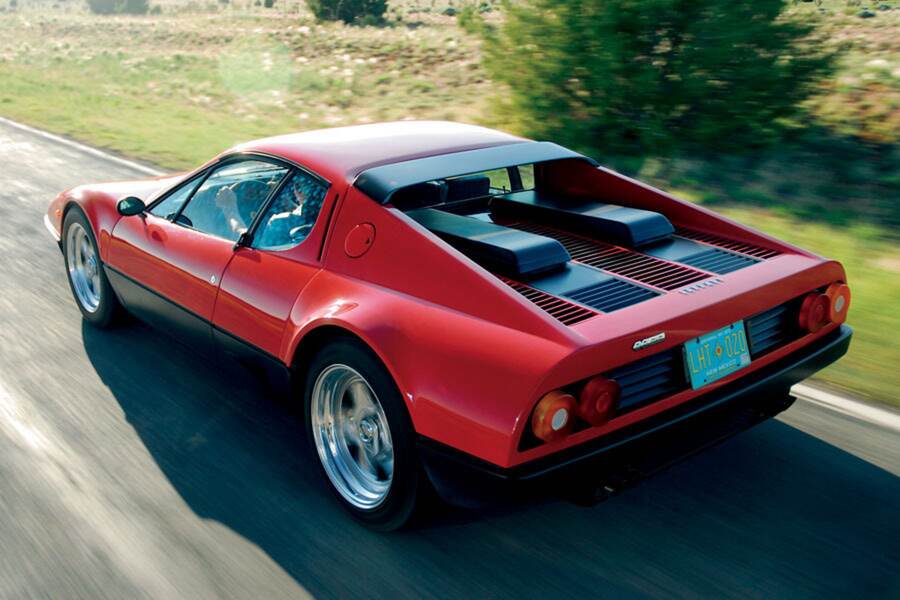 CAROBU’S FIRST STEP WAS TO PULL THE ENGINE from the car, after which Wehr began the rebuild. The 4,943cc flat-12’s stock 82mm bore and 78mm stroke were retained, although the original cast-iron liners were overbored 0.5mm to accommodate new forged pistons that raised the compression ratio to 10.2:1. The crankshaft was balanced, then it and the connecting rods were Magnafluxed to make sure they contained no hidden cracks. “The basic 512 BB bottom end is very strong, so no additional modifications were needed,” says Casey.

Wehr next turned his attention to the Boxer’s cylinder heads. These were tested on a Superflow flow bench, and the flow numbers were analyzed using special software. “Most two-valve Ferrari heads are intake-flow deficient,” notes Casey, and this one was no different. Carobu’s solution was to enlarge the intake ports, raising flow from 160 cubic feet per minute to 180, then port-matching the intake manifolds to the enlarged intake ports.

The exhaust ports remain stock, although the exhaust valves were replaced with one-piece Zanzi items. The head and stem of the original Ferrari valves are welded together, a manufacturing process that can lead to the head snapping off—usually with disastrous results. 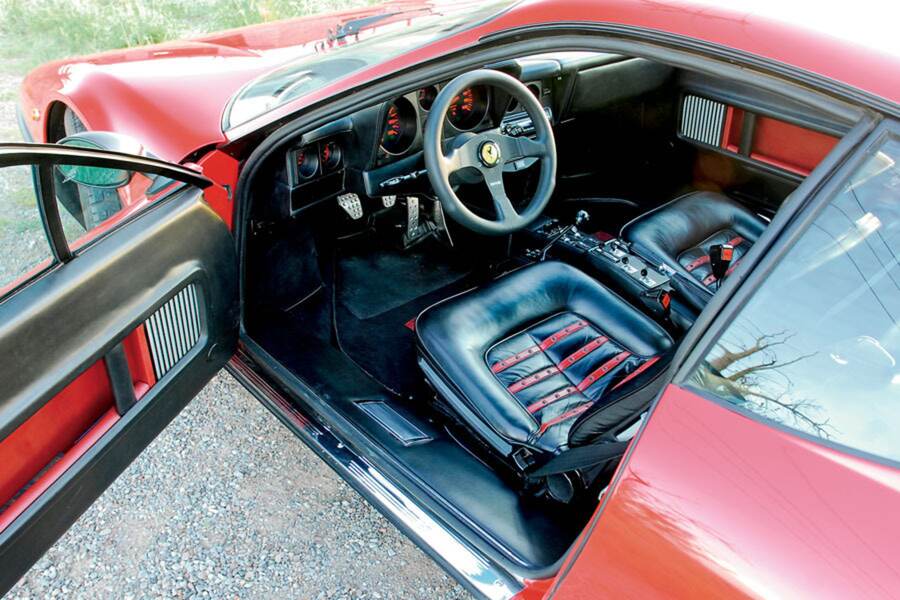 To select the proper camshaft profile, Carobu relied on its engine-simulation software. “The goal was good mid-range torque and top-end power with street driveability,” says Casey. The computer recommended the company’s Daytona camshaft profile, which features 247 degrees of duration, and a set of these cams were fitted, along with brand-new Ferrari valve springs.

The warmed-over engine exhales through the stock exhaust headers, which were ceramic coated to contain heat and eliminate rust and corrosion. The stock muffler was replaced with a stainless-steel Tubi unit, which sounds and performs better and weighs 40-plus pounds less. The stock radiator made way for a custom aluminum one, trimming another 35 pounds and improving cooling.

When it was tested on Carobu’s engine dyno, the flat-12 handily exceeded everyone’s expectations, even its builder’s. Before the rebuild, the 4.9-liter mill had delivered 364 crank horsepower at 6,500 rpm and 357 lb-ft of torque at 4,000 rpm. After the rebuild, says Jolley, “It blew us all away by producing 468 horsepower and 392 lb-ft of torque!” That’s practically in 512 BB/LM territory—Ferrari rated that competition car at roughly 480 hp. 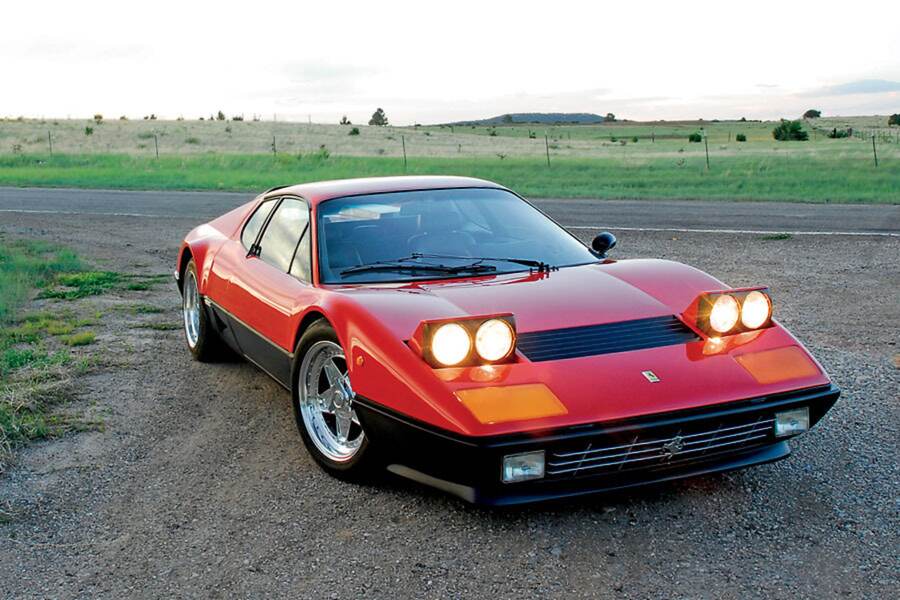 WHILE WEHR WAS BUSY WITH THE ENGINE, the 512’s chassis and body were sent to Carobu’s paint and body shop. The Ferrari originally left the factory painted black, and had later endured a sloppy respray in red, at which time it also gained the distinctive black-bottom Boxer trim.

Literally hundreds of hours were spent sanding and prepping the bodywork, improving panel gaps and diligently checking and rechecking everything. “Just painting the rear louvers is a lot of work,” says Casey. “You have to pull them off, sand each louver, primer it, sand it again, paint it and then hand buff each louver.”

The rocker panels were resprayed black, while the rest of the BB’s rakish body received a custom shade of Rosso Corsa. “We mixed a special color that is a little brighter than the stock color,” Casey explains. “No other Ferrari is this exact shade of red.” All-new rubber seals, a new windshield and new rear glass were fitted during the reassembly process. Also replaced were all of the light lenses, except for the orange front turn signals, which have been unavailable for years. 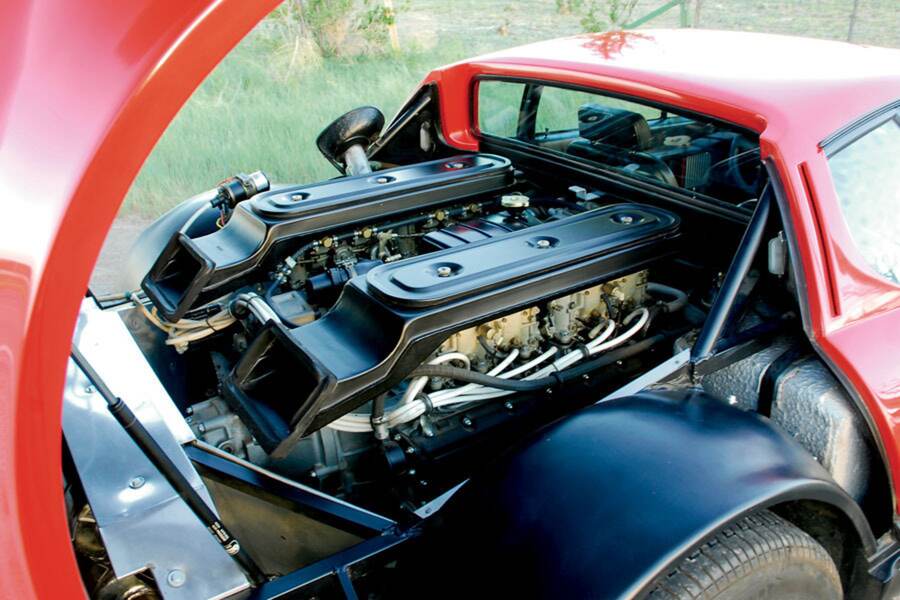 The Ferrari’s interior was tackled next. The original black-and-white trim was removed, and the entire cockpit was redone in black leather, even the headliner. The seats and door panels received red inserts. To modernize the interior’s appearance a bit, the original large-diameter steering wheel was swapped for a Momo Competition wheel wrapped in perforated leather, while the rubber pedals were replaced with drilled aluminum units.

The car’s underpinnings were not ignored. Every component was removed and stripped, then painted, powdercoated or plated in the correct finish. The original Koni shock absorbers were sent out to be converted to coil-overs, with threaded bodies that allow the ride height to be set easily and precisely. “This allows the use of 2.5-inch Eibach racing springs,” says Casey, “and since these springs are available in a wide variety of lengths and rates, the exact handling effect can be chosen.” The Eibach springs were powdercoated black to emulate the appearance of the stock springs.

The stock brakes were rebuilt with cross-drilled rotors, and a set of 17-inch Razzo Rosso three-piece wheels were installed. The latter measure 8 inches wide up front and 10 inches wide at the back, and are wrapped in 235/50 and 255/45 Pirelli P Zero rubber. 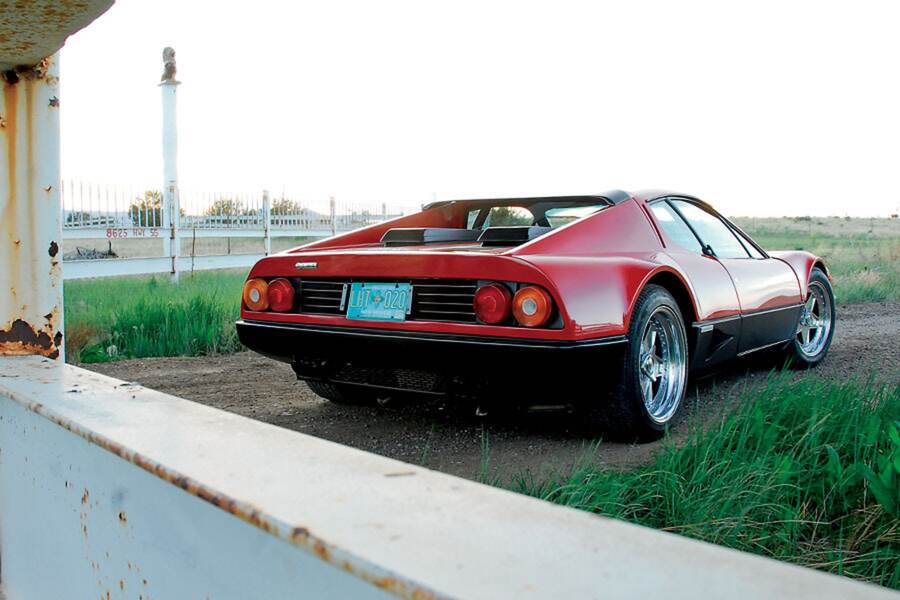 JOLLEY TOOK DELIVERY of the reborn Ferrari in mid-2007, and has been using it to relieve stress from his busy professional life ever since. When the Boxer was shipped to Carobu’s new shop in the wilds of Estancia, New Mexico for a service earlier this year, Jolley longed for its return: “My wife says to me, ‘You have to get that car back. If you’re in a bad mood, you come back from a drive in it in a good mood!’ I miss it.”

While he wanted the car back in California, Jolley nonetheless offered me the chance to drive it—which is how I found myself climbing behind the wheel on a deserted stretch of New Mexico highway where you’re more likely to see a wind-blown tumbleweed or a hungry coyote than a blood-red Ferrari.

With the exception of the smaller Momo steering wheel, it’s business as usual from the driver’s seat: Laid-back seating position, arms stretched out, knees slightly bent. Twisting the ignition key produces a lazy whine from the starter, but a slight prod of the gas pedal helps those downdraft carbs bring the engine to life. After the flat-12 catches, a generous blip of the throttle clears the slight stumble and helps it settle down to a busy but smooth idle. 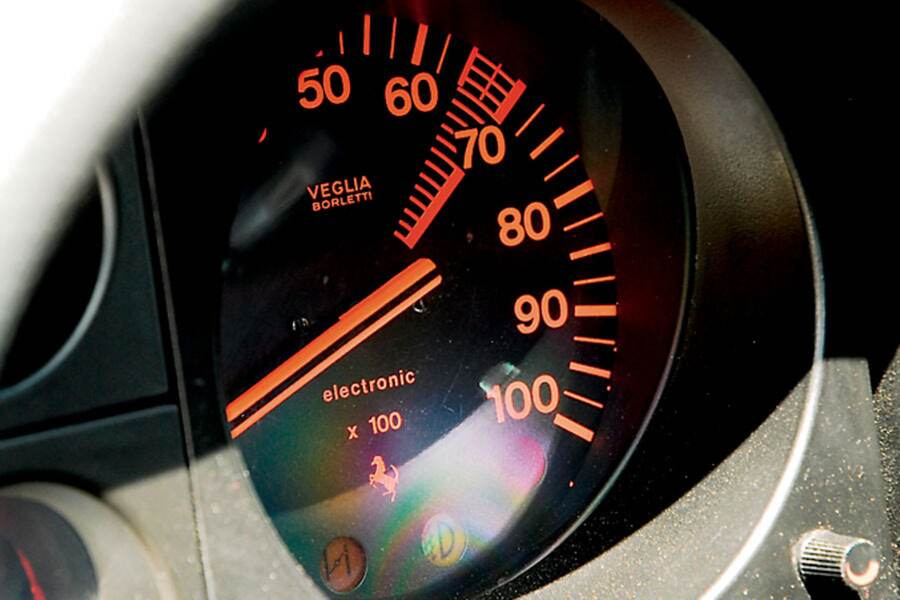 I’ve driven several Boxers, and am always amazed at what an evocative experience these beasts offer: The smell of leather mixed with an occasional whiff of fuel, the wide, raked windshield’s CinemaScope perspective of the oncoming road, the sound of the snarling engine sitting so close behind the cockpit, the click-clack of the gated shifter…. Let’s just say I’m tempted to put the pedal to the metal and disappear into the New Mexico desert, never to return.

When I punch the throttle, the flat-12 revs quickly, slinging the Boxer down the road with a deliciously hair-raising howl that transforms into a demonic shriek as the tachometer needle swings past 5,000 rpm. Peak torque arrives at 5,200 rpm, but the engine screams on with unabated urgency to its 7,100-rpm power peak. Even then, the flat-12 feels like it wants to keep spinning faster.

Straight-line acceleration is significantly stronger than in a stock 512, with knife-edged throttle response compared to the relatively lazy reactions of an injected Boxer engine. Aside from a slight flat-spot around 3,500 rpm (the engine is running a little rich because the carbs are jetted for sea level in Costa Mesa, not New Mexico’s altitudes), power output is incredibly linear, building like an express elevator as the engine rockets up the power band. The clutch is stout but the shift effort is pleasantly light, so it’s easy to clack into the next gear and start the show all over again. 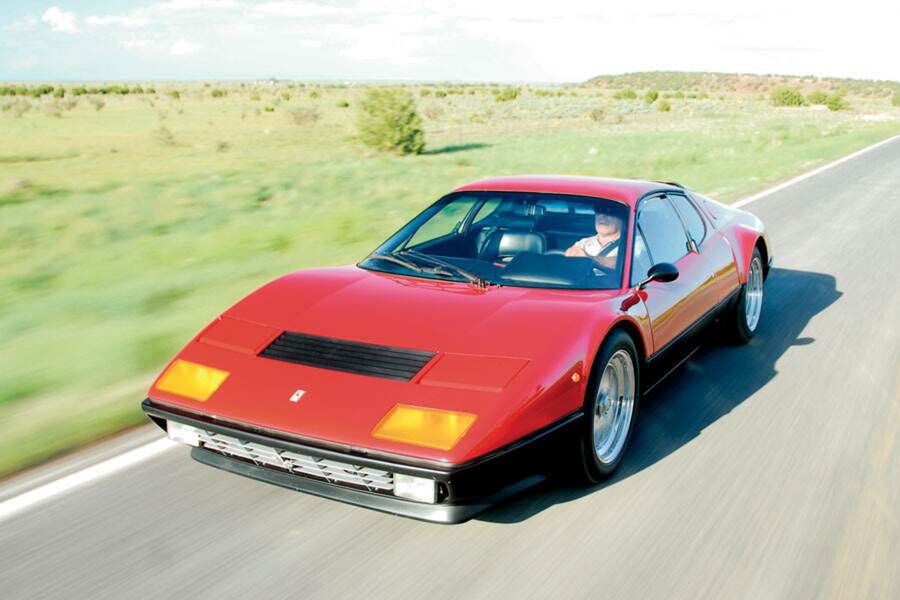 The Ferrari’s performance is as addictive as it is impressive. Every clear length of road becomes another opportunity to take the engine to redline. And on a deserted stretch where I can see for miles ahead, it’s not long before I’m exploring triple-digit speeds, the Boxer hunkering down on its fat alloys and straining enthusiastically towards the horizon.

I had expected great things from the engine, but I wasn’t sure how the suspension changes would pan out. A stock 512 can be a scary car to drive quickly, its heavy lump of an engine, mounted high in the chassis, conspiring with a tall ride height to make fast sweepers a white-knuckled experience.

Happily, this is not the case with Jolley’s Ferrari. While it’s not nimble, this Boxer handles significantly better than stock, with less squat under hard acceleration and less dive under braking. Weight transfer is also far more controlled, eliminating the fear factor in fast bends. But the Boxer remains a relatively heavy car with a high center of gravity, and the mostly stock brakes, which are not great on a standard 512, are no match for this car’s newfound power.

These factors don’t diminish the thrill as the Boxer launches out of the bends on a euphoric wave of torque; the combination of power, noise and road feel is truly magnificent. Respect its limits, and this car delivers one of the most emotionally satisfying driving experiences I’ve had in a Ferrari.

Owner Jolley agrees. “When I get in it, I feel like I’m in my own world,” he says. “When you drive it, you realize it’s a really great machine. I’m really proud to have it. I waited 27 years to get it and had to make some sacrifices, but I’m glad I got it when I did.” 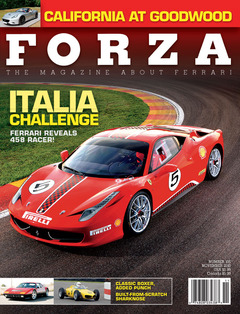