Looking for a Ferrari to use every day? The comfortable, practical, reliable California may be the car for you. 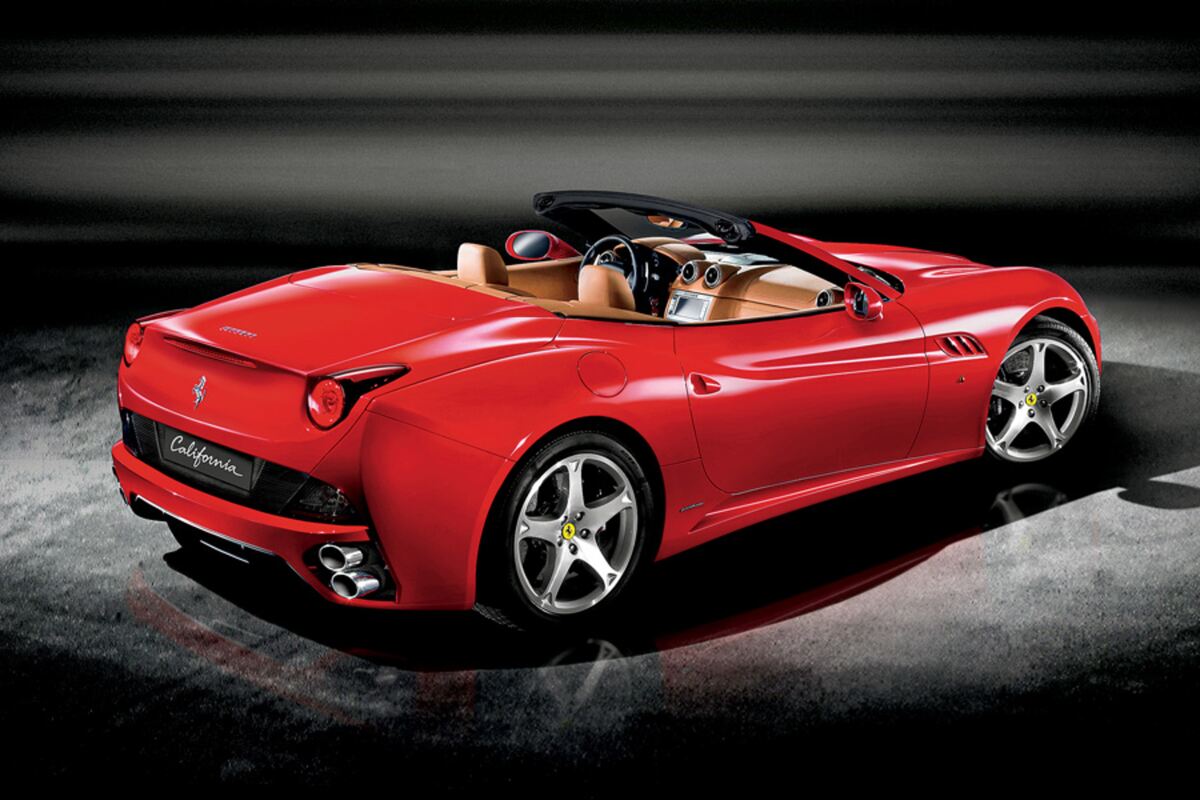 At the 2008 Paris Auto Show, Ferrari introduced an all-new hardtop convertible: the California. The company had developed the V8-powered GT to attract a broader audience, one that might otherwise buy a luxury drop-top from Aston Martin or Mercedes. In trying to widen its reach, however, Ferrari infuriated a very vocal segment of its fan base.

Put simply, the California was panned almost from the moment it was announced. Complaints surrounded its name (an homage to the legendary Cal Spyder), aesthetics (particularly that plump rear end), its intended “non-enthusiast” buyer, even a rumor the model was originally developed as a Maserati.

As so often happens, once people had a chance to drive the California they discovered it wasn’t bad. On the contrary: As a fast, luxurious convertible, the California was great. The automotive press almost universally praised the newest Prancing Horse’s speed, refinement, comfort, and practicality. The vestigial rear seats—so small that Ferrari described the car’s layout as “2+” instead of “2+2”—weren’t sized for real people, but proved excellent for additional storage (as did an optional rear bench).

Like its stablemates, the California featured all-aluminum construction, a flat-plane crankshaft, and carbon-ceramic brakes. Despite being the least-powerful pony in the lineup, it was the most sophisticated: The California was the first model to receive the seven-speed dual-clutch gearbox, multi-link rear suspension, and direct fuel injection used on all current Ferraris. Other California firsts included a front-mid-mounted V8 engine, die-cast aluminum chassis components, front and rear subframes to carry all of the car’s mechanical components, and, of course, that folding roof.

At the 2012 Geneva Auto Show, Ferrari unveiled the mechanically updated California 30. (Though unofficial, the “30” moniker is used by the factory and dealers alike.) Compared to the original car, the Cal 30 produced 30 additional horsepower and weighed 30 kilograms less. Also new, and popular, was the optional Handling Speciale package, which improved the car’s reflexes with little penalty in ride quality. Production of
the Cal 30 ended in 2014. 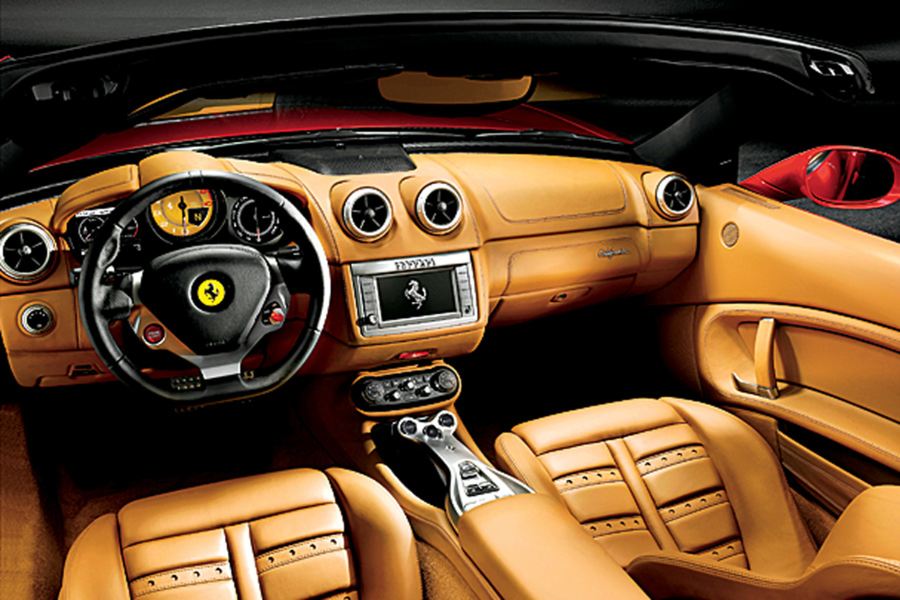 In the years since its debut, the California has become Ferrari’s best-selling model, which means used examples are plentiful. Add in the car’s impressive reliability, performance, and all-around usability, and this is one Ferrari that’s easy to recommend.

Capitalizing on the mystique of the original 250 GT California, Ferrari designed the 2008 California to be the company’s first true mass-market, high-volume model. Marketed at a sub-$200,000 price point, the California was aimed squarely at buyers who were more attracted to luxury and usability than ultimate performance. As the company’s Director of Product Development, Massimo Fumarola, put it, “California buyers like to go away for the weekend. They have kids, and they like the versatility of the car. They are looking for a sports car, but the F430 is too much.”

The car eventually became the success Ferrari hoped for, but it wasn’t a smooth ride. The California was introduced just as the economy tanked (remember Lehman Brothers?), the long list of ubiquitous options pushed window stickers well above $200,000, and many customers were disappointed to discover the rear seats proved pretty much useless for human habitation. Total sales over the first three years were only around 8,000 units, but production climbed as the economy recovered, particularly when Ferrari introduced the lighter, more powerful California 30.

All those sales, along with the miracle of depreciation and the arrival of the turbocharged California T, have tilted the marketplace firmly in the buyer’s favor. First-generation Californias with 15,000 miles can currently be found with asking prices in the $125,000 range. Higher-mileage examples can dip into the low $100s, a fantastic bargain given the car’s capabilities. At the other end of the scale, a low-mile, fully optioned California 30 can bring $175,000 or more. In either case, with hundreds
of Californias for sale at any given time, you can afford to be picky. —Michael Sheehan

These prices are for fully serviced cars in good-to-great condition. 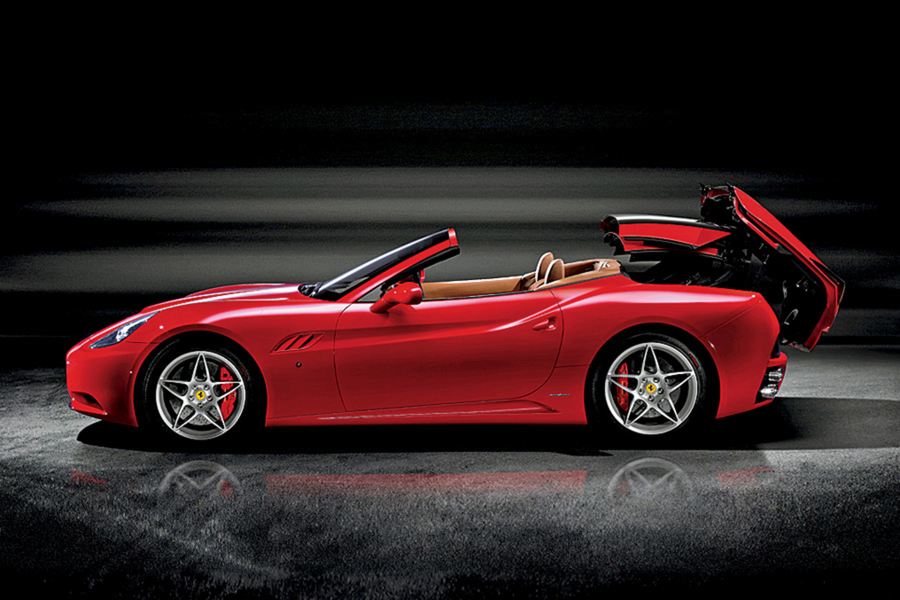 It’s no sports car, but the California delivers a fantastic GT driving experience. Here is some of what we’ve said about the model.

I PUSH THE LOUD PEDAL to the floor. With the top down, the engine’s bark echoes loudly off the nearby rocks. I tug the right-hand shift paddle to upshift once, twice, then it’s time to get on the brakes. I do, accompanied by a couple of pulls on the left-hand paddle; the engine blips to match the revs. The Ferrari slows dramatically as the big carbon-ceramic discs bite, and the front end dives.

I turn into the corner and get back on the gas. The California easily puts the power down, launching out of the turn. I immediately get back on the brakes for a sequence of very tight corners. The car’s light and precise steering is a real boon here, as is the abundance of grip.

I’m constantly impressed with how user-friendly the Ferrari is to drive quickly and how safe it feels. At the same time, it quickly becomes clear the California is no canyon-carver. Thanks to the large amount of body roll and 3,817 pounds I feel a step or two behind the action. I throttle back to around seven-tenths and discover that both the Ferrari and I are much happier. I’m not going slowly, either; seven-tenths in the California is more speed than many cars can muster.

On the road, the new California is a marvel of docility and civility, completely at ease commuting through stop-and-go traffic, running mundane daily chores or cruising down the highway. But when I get on it in anger, the car shoots deep into triple-digit speeds with ease. 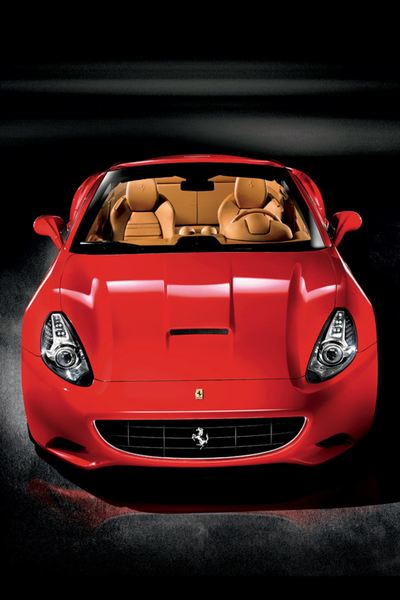 The California is deceptively quick, so seamless is its acceleration. The V8 pulls with one long elastic whoosh of thrust to its 8,000-rpm redline; there is no hint of peakiness.

My favorite aspect is probably the steering. The turning radius is tight and turn-in is superbly crisp, yet the Ferrari never feels nervous regardless of speed.

Indeed, the California always feels completely unflappable. Whether I’m going fast or slow, everything remains placid and serene, with the world and its troubles held at arm’s length. This is quite likely the best all-around car Ferrari has ever made, a perfect successor to the 330 GTC, 365 GTC/4, Mondial t and 456. It is truly brilliant in its own unique way. 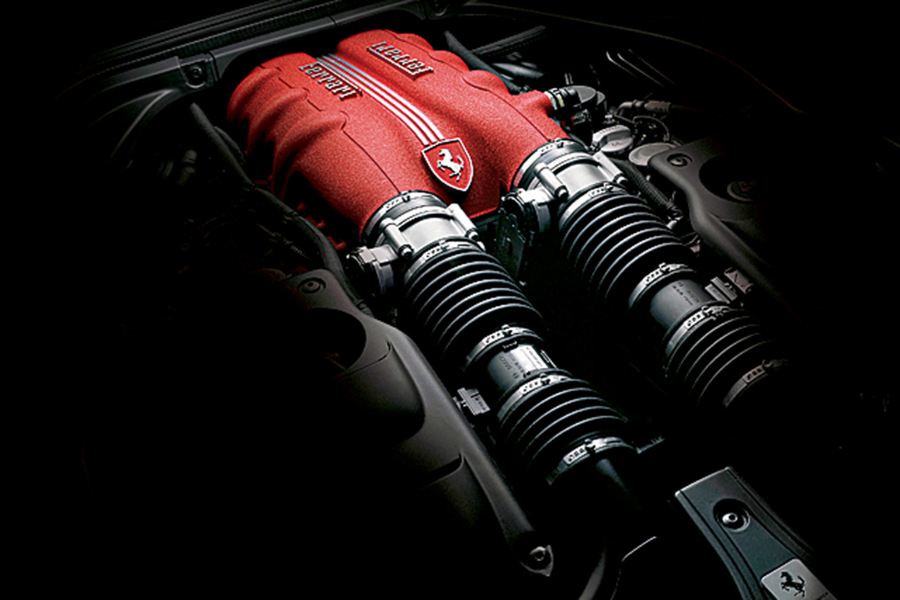 The California 30 feels noticeably sharper when I get on the gas compared to the original. The two tenths of a second drop in 0-62 mph time actually represents a major improvement in terms of acceleration; this car is seriously quick. Ferrari claims a near 200-mph top speed, and while I didn’t try that out, I can report that third gear is always good for a quick-and-easy, and truly glorious-sounding, 120 mph.

In terms of handling, the Handling Speciale setup really delivers the goods. Ferrari’s claims of reduced body roll is spot-on, and the California 30 handles more confidently than the first-gen car. There’s also a bit more steering feedback and road feel than before.
The car lives to run, loves to attack and does a far better job of telling you what it’s up to than its predecessor.

After speaking with service managers at several authorized Ferrari dealers, as well as a few mechanics at independent shops, I’ve found a clear consensus on the California and California 30: Like all modern Ferraris, they are practically bulletproof. How else to describe a car that’s most common problem is a dead battery caused by infrequent use? 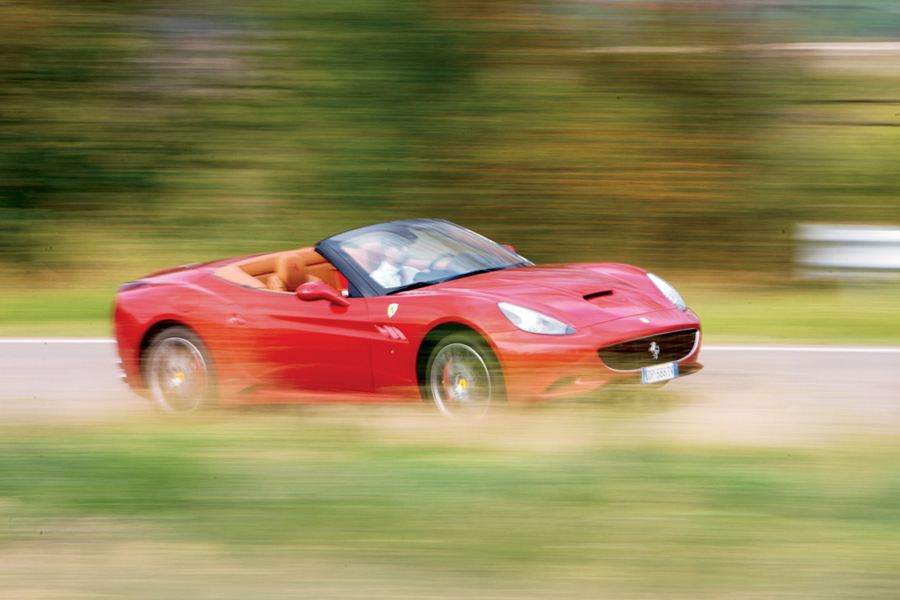 Overall, the California is as rugged and reliable as one can hope for in a low-volume exotic. As with any such high-tech car produced in small numbers, however, isolated problems do arise, most often in the form of electrical gremlins, such as random warning lights and dead fan relays, and the occasional failed instrument panel. Early examples did have a handful of more serious teething problems, but any such issues should have long since been resolved under warranty.

Servicing costs are also pretty painless for an exotic. The once-dreaded cam-belt replacement is now a thing of the past, as the 4.3-liter V8 utilizes a timing chain. In addition, in 2012 Ferrari introduced a free seven-year unlimited-mileage maintenance program that covers the usual fluids and filters (but not wear parts like clutches, tires, and brakes).

Ferrari’s new-car warranty lasts for four years, after which an extended warranty is available through the dealer network. Unusually, this warranty is good for only one year, it must be renewed annually, and the price is determined by the dealer based on the particular car’s condition, mileage, and so on. Unusual or not, the warranty could be a life saver since some major components, such as the folding-top assembly, have to be replaced as complete units—a repair that’s likely even more expensive than it sounds. (Fair warning: Some owners have damaged their car’s roof by lowering it when an object was sticking through the truck pass-through or the trunk was simply too full.) —Michael Sheehan

Why did you want a California?
I’m a tall guy, 6-foot-7, so I’m kind of sports-car proof. I had a chance to sit in a California at a private showing in Pebble Beach in 2009, and had a chance to touch and feel everything, so I knew I could be comfortable. I had owned a 360 Spider and a 575M Superamerica, both daily drivers, and that’s what I used this car for.

What did you like most about the California?
The elation of driving a very special piece of machinery. It was very fast, very responsive, it looked great, and it attracted attention. It has plenty of room for a weekend trip and you’ve got the back seat to throw stuff in. Flip down the back seats and you’ve got a pass-through that’s available whether the top is up or down.

Any dislikes?
The seats were a little on the tight side in terms of width, and it’s not like I have a big butt! The seat frame is kind of snug and there isn’t a lot of padding between the frame and your hips, so it could be a little annoying on longer trips. Other than that, I got those strange announcements on the dashboard every once in a while, but I’d just stop, restart the car, and they’d go away.

How reliable was your car?
It was good. I drive pretty sanely—I never even used the Performance Start—so the brakes looked like they’d last forever and I just went through one set of tires. The car remained rattle-free for the entire five years I had it. I also liked the little plastic spoiler under the nose. If it gets all scraped up going in and out of driveways, it’s very reasonable to fix and you don’t have to deal with the whole bumper.

There were a few issues, since mine was a very early car, but you always take that chance when you’re the first kid on the block. Early on, Ferrari replaced the exhaust manifolds in a factory recall. When I had just two weeks left on my warranty, I lost the use of four gears when some electrical wires inside the gearbox wore through and were shorting out. If not for the warranty, that would have cost $20,000-25,000 to fix on my own nickel.

Would you recommend the Calfiornia to a friend?
Oh, very much so. It’s more than just the Ferrari name, it’s a good all-around reliable car. For the average person who just wants to cruise and use it, I would highly recommend one. 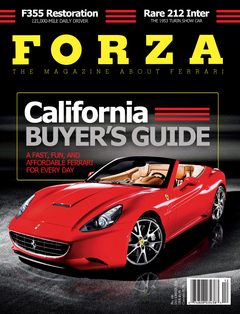